The fate of the avant-garde battle

April 15 2018
90
Can a single battery decide the fate of avant-garde combat? The answer to this question offers this article.


October 18 1914, after heavy Boguqinsko-Kozienicki battles of the first half of October during the Warsaw-Ivangorod operation, for the fifth day, units of the 17 Army Corps were pursuing the retreating enemy in the direction of Kielce. Avant-garde divisions, as part of the 9 Infantry Regiment of the Ingermanland Regiment and 2 light batteries, in the region of vil. Ostakhov came in contact with the retreating Germans.

According to intelligence data, the enemy rearguard units were occupied by hillocks separated from the der. Ostahov rather deep transverse glen.

The 1-th battery of the 3-th artillery brigade, in order to timely support the advancing infantry chains, moved off the 50 steps away from the highway that ran along the village, and quickly took a half-closed position - having an observation point on one of the huts lying ahead. 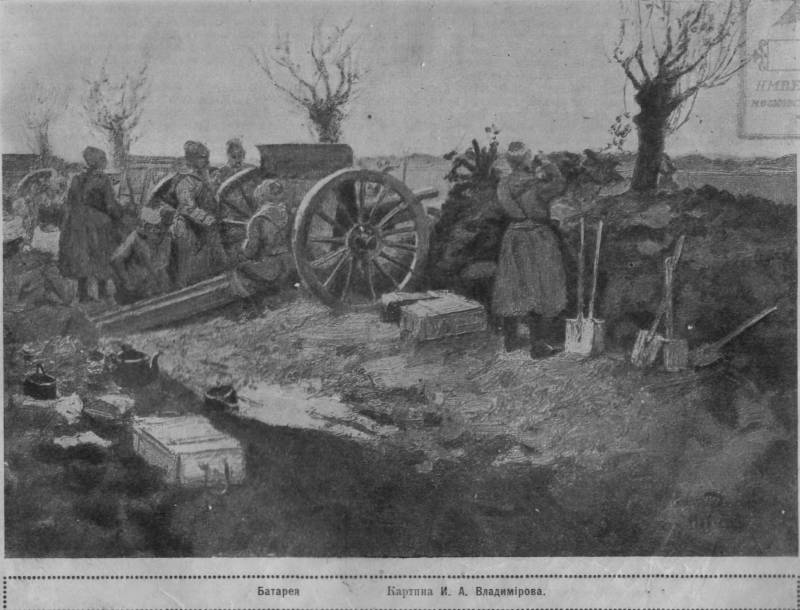 The energetic pressure of the Russian infantry, which acted with the friendly and intensified assistance of the batteries, led to the enemy rearguard being rejected from the hilly ridge that bordered the hollow. By 11 clock battle verse.

The hills were occupied by the Russians, whose main forces, replacing the vanguards, were gradually drawn into the combat sector of the 9 regiment. On the highway along Ostahov, the 2 battalion of the 11 Infantry Regiment of the Pskov Regiment passed, gradually hiding in the hollow lying in front. Artillery rumbled behind them along the highway - it was the 4-i battery of the 2-division. Simultaneously with the artillery, along the highway stretched, on the one hand, machine-gun wagons and steam conic gigs, on the other - sanitary lines. The highway was dammed.

Suddenly, against the background of a pale blue cold sky, directly above the moving troops, two white clouds floated - German artillery opened fire. In less than two minutes, a sharp whistle came to the ears of the Russian artillerymen, and two, accompanied by a roar, a column of smoke and earth shot up just above the highway. Behind them, almost immediately with a crash and a roar, in different parts of the village and on the highway, rushing grenades and bombs rumbled. The dilapidated huts, cracking, collapsed and caught fire. The parts of the 11 regiment, which were crowded at the entrance to the ravine, suddenly came under artillery fire, rushed in different directions and, pushing and crushing each other, tried to get out of the ravine as quickly as possible. Artillery, caught in a marching column, began to turn back. Horses shied away in horror, throwing carts and gigs in the curb that prevented her. Dyshla broke, oncoming people choked. And the shells, one after another, with a terrible hoot, continued to burst into groups of crowded people and animals, into huts and sheds.

The mass panic psychosis spread instantly: the infantry continued to flee from the hollow just under the guns of the batteries that were in position. Wild cries of "back, back" did not stop the runners - as they themselves shouted, apparently not comprehending it, ran, driven by animal horror.

At this moment, the moment of general panic, the 1-I battery of the 3 artillery brigade returned fire. This unique combat response of the not confused gunners was of great importance. On the one hand, he morally supported the bewildered people, and on the other, he distracted all enemy artillery fire: no later than through 5 - 10 minutes, the fire on the highway and convoy was suddenly stopped and in full, by the fire power of 2 - 3 German batteries , collapsed on a brave Russian battery. 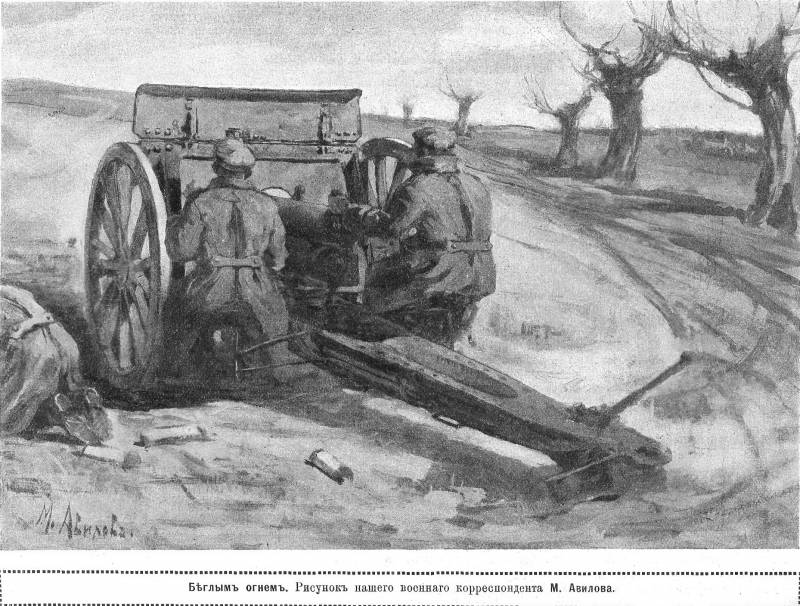 From 15 to 17 hours, that is, before dark, the enemy did not cease fire, but the Russian battery continued to respond - although now only from 5 guns. The darkness stopped this fire match. The observation post of the battalion commander was burned, and of the five ranks of the communications team who were with him, 1 was killed and 3 was seriously injured. On the battery, one gun was hit, and almost all the others had fragmentation holes - from gun shields to box boxes. Several people from the crew were seriously wounded by shrapnel of German grenades. Until the time of the battle, the gun men did not have time to dig up, and then, after the shelling began, it became impossible. The settlement crews hid behind the charging boxes in the back of the guns, continually risking being blown up together with the latter in the case of a direct hit by an enemy projectile. During heavy periods of fire squall, platoon commanders sat on the ground - also hiding behind the backs of the charging boxes and dropping their legs into a small, about 30 depth, see the hole that they dug during the battle. 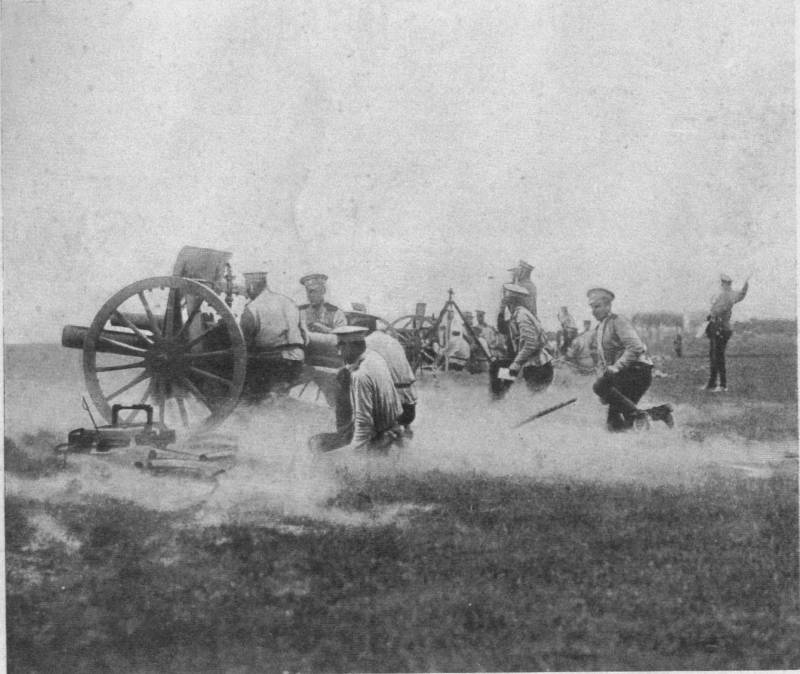 The arrogant advance of the Russian infantry, met by the stagnant and most likely adversary, ended relatively successfully largely due to the selfless fire intervention (and, moreover, the only one) from the 1 battery of the 3 artillery brigade - which had fired at the unequal fire fighting campaign adversary. As a result, the frustrated units of the Russian infantry were put in order behind the artillery positions, and the enemy rearguard left their positions.