Break through the wall without breaking a head. H. 4


The conclusions drawn from the Naroch operation laid the foundation for a number of instructions and instructions. Thus, the Instruction for fighting for the fortified bands, issued by the headquarters of the 5 Army, fixed that the total depth of the 3-linear fortified band should be up to a kilometer (the rear position went on). The first line is the watchdog, the 2-i line should be strengthened the most, and the 3-i serves to concentrate reserves and is used to restore the position when the first lines break through. Defense must be built on cross and flank fire from all types of rifle fire. weapons. 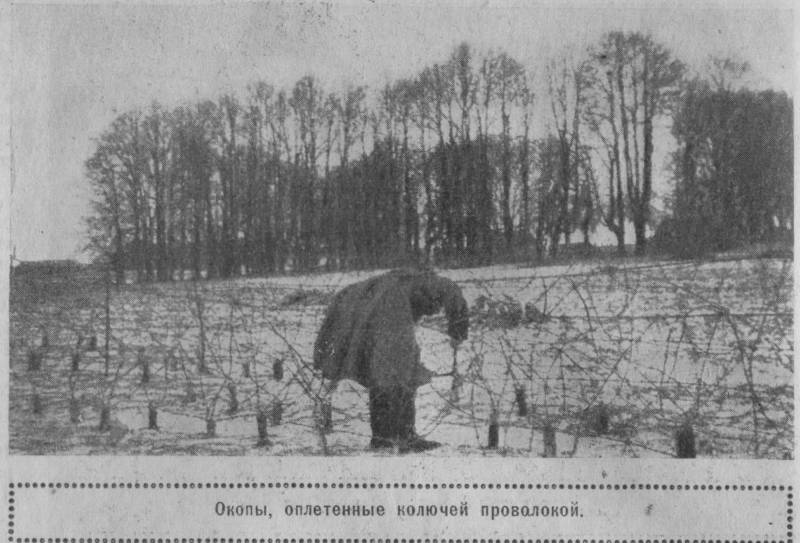 It was prescribed to base the defense on a set of strongpoints staggered and interconnected by message moves, and to have at least 2-3 artificial obstacle bands also associated with the positions of the messages. Moreover, communications should also be used to organize longitudinal and cross-fire approaches to artificial obstacles, trenches and strong points. 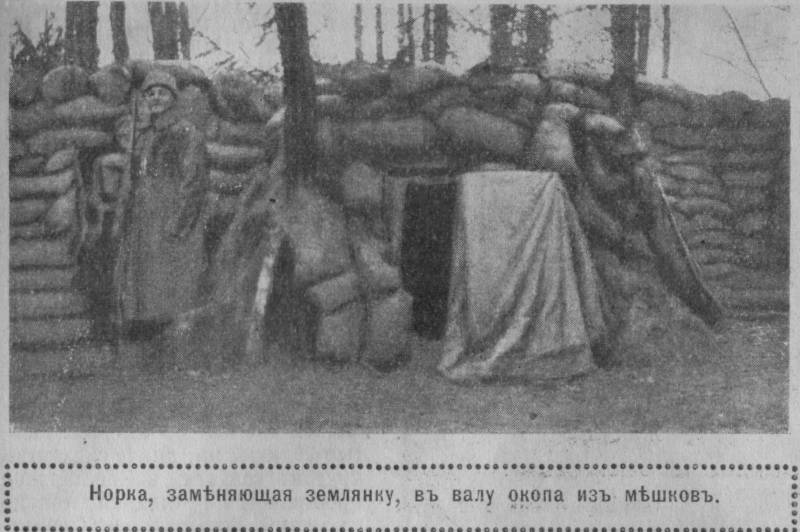 The trenches were recommended to adapt to the terrain as much as possible - by building them, for example, on the reverse slopes of heights. The defense was to be built on immediate and sudden counterattacks of the enemy units that had broken through, including flank units, using all possible firing means. 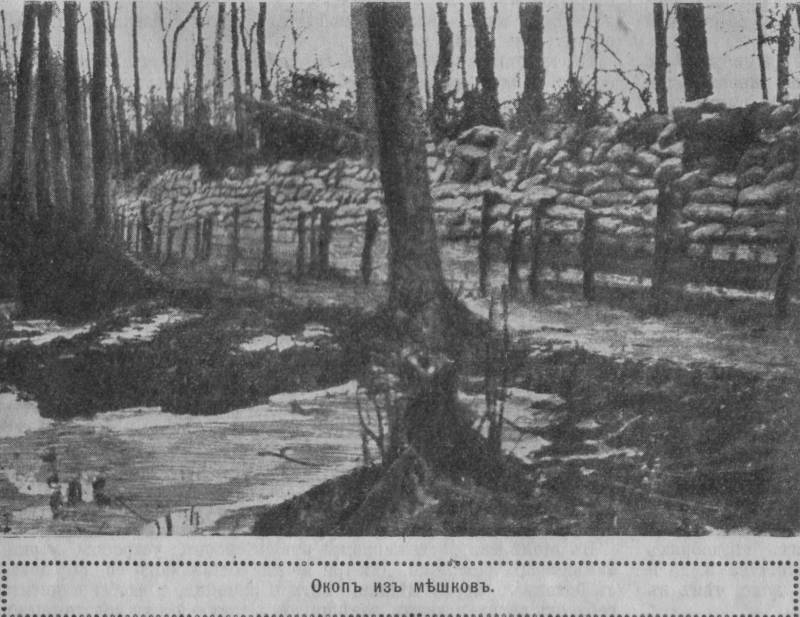 The most important recommendations concerned the assault on the fortified bands of the enemy. Preparations for the offensive included the following elements: reconnaissance, selection of a site for a breakthrough, calculation of the necessary forces and means, engineering training (creation of an engineering assault bridgehead), regrouping and training of troops, control measures, monitoring and communications, solving supply issues, training artillery and infantry attack plan. 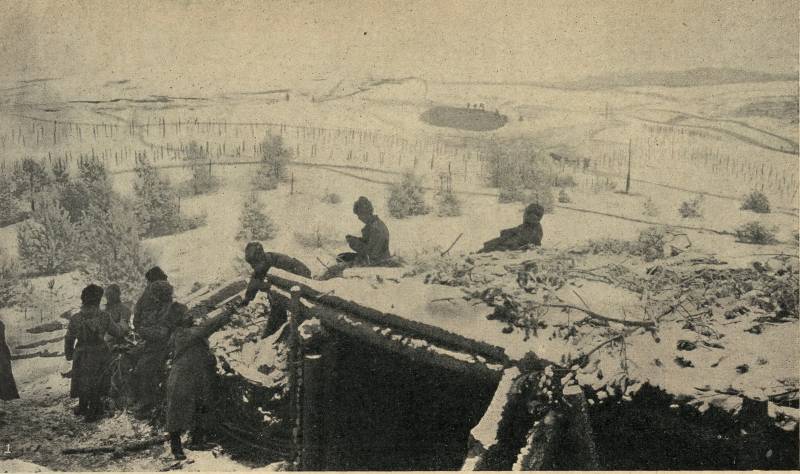 General view of the positions repulsed by the Germans. In the foreground - a lightweight dugout for the gun.

Intelligence in all its forms (infantry, artillery, engineering, gas) collected all the information necessary for the offensive - from identifying hidden approaches to enemy positions to finding out how to feed the enemy troops.

For the breakthrough, the 1,5-2 km wide section was chosen - but it had to be expanded to the sides of the flanks (by 7-8 km), in order to provide troops from through flank fire. The standard for calculating the forces and assets is the infantry division on the 1 km of the breakthrough front in the first echelon, at least an infantry regiment for every kilometer of offensive development towards the flanks, the 1-2 infantry division in the second echelon. Thus, on the 10-20 km breakout area, the 3-4 corps was required, united by army control. 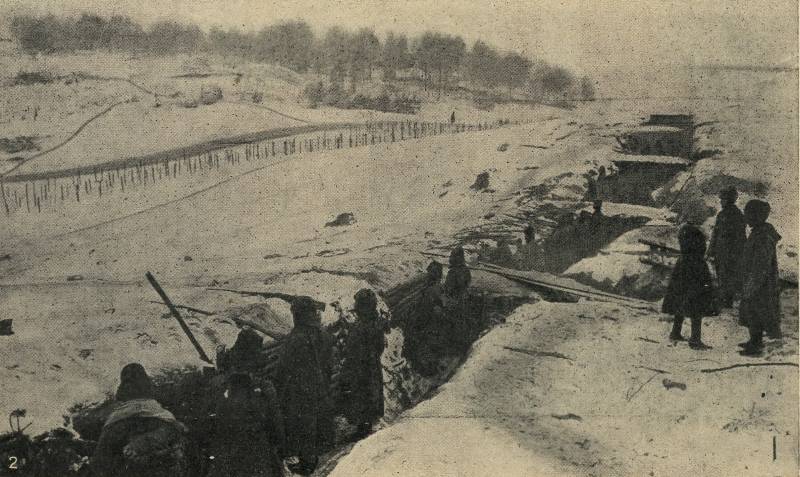 For the destruction of wire obstacles, scoring and slingshots, the most suitable was methodical concentrated fire with high-explosive shells at the rate of: 1 light battery with 2-km distance provides passage in the 42-43 width obstacles (if there is an accurate preliminary adjustment). But for making passes you can use mortar fire, grenades, elongated pyroxylin charges, scissors and axes. For the destruction of trenches, firing points and shelters, it is necessary to use 107- and 152-mm guns. Artillery must provide a fire curtain and interact with the infantry upon the occurrence of the latter (including highlighting the instruments of direct escort). Mortar preparation complements the artillery and is conducted between artillery preparation and infantry attack.

It was prescribed that a fresh, rested and familiar with the terrain infantry should be sent to the offensive. Artillery is divided into groups depending on the tasks it solves. 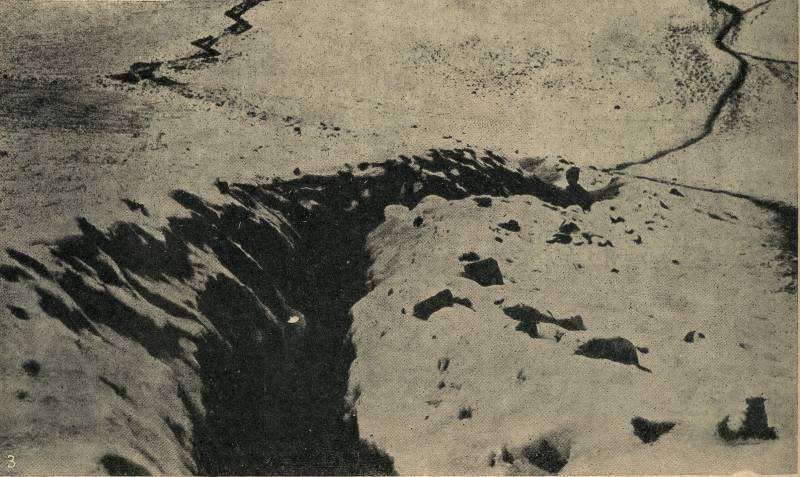 Turns of messages on the German positions occupied by Russian troops.

Considering the problems in the field of management and communication, the instructions paid special attention to the solution of these issues.

In the absence of engineering assault bridgeheads, attacking troops concentrate to attack: in open areas - under the cover of darkness or fog, and in closed areas - in the afternoon under cover of artillery preparation. The offensive is conducted by dashes with consolidation of the achieved lines, the rifle chains are at a distance 100 - 150 steps from each other.

During artillery preparation, artillery actions must first be directed at the destruction of enemy strongholds, which are the basis of its defense and impede the movement of infantry — that is, along artificial obstacles, machine guns and trenches. Light artillery firing at obstacles and front line troops, heavy artillery at machine guns, trenches and shelters. Dedicated light field guns and 122-mm howitzers carry out counter-battery combat.

After the passageways are punched in the wire obstacles, the infantry (with grenadiers, workers and a sapper in front to widen the aisles in the obstacles), under the cover of the firing shaft, moves forward in "shallow waves", trying to overcome the barrier of the enemy’s fire as soon as possible. The parts of the breakthrough secure the enemy’s positions (after one of the most difficult types of combat - the battle in the enemy’s position), and the success echelon of development develops the breakthrough into the depths and sides of the flanks.

The Stavia Manual emphasized that the infantry possesses great tenacity (ability to hold a terrain section), while “trench instruments” allow it to quickly gain a foothold, and powerful weapons (rifle and machine gun) give it confidence in the ability to stop any enemy attack - but only the latter is not prepared by artillery. But “infantry is quickly spent,” especially during a positional war, when it is necessary to overcome various obstacles.

It was declared that the offensive in the positional war should be based on swiftness and overwhelming power of the onslaught - after the "overwhelming artillery preparation and the immediate, but short, but powerful infantry leap."

He formulated his conclusions in relation to the actions of the troops in a positional war and the head of the 2 Army assault group, General of Infantry P. Baluev. He noted that the war is fought under different conditions than “we are accustomed to think and what we were taught. Already since 1915, it turned out that the war was being fought not by standing armies, but by folk forces, that technical means played a dominant role in it ... Thanks to the appearance of technical means, the unexpected positional war came to everyone, which demanded new methods and methods of conducting the offensive . Meanwhile, until the end of the war, we adhered to the old methods of warfare and, mainly, the principles of field warfare, and, relying mainly on our superiority in manpower, we lost sight of the fact that the superiority of this, without a sufficient amount of technical means, is not enough ... the operation of manpower was enough, but in the absence of a due amount of technical means, it was only enough for a breakthrough " [The Eighth Army in Lutsk breakthrough. World War 1914-1918. Lutsk breakthrough. Works and materials for the operation of the South-Western Front in May-June 1916. - M., 1924. C. 73 - 74].

In a Notebook compiled by him, P. S. Baluev detailed his tactical views.

He revealed the specifics of a new type of hostilities - a positional confrontation - in which the main role was no longer played out by living force, but by technical means. And all the belligerents were not ready for a positional struggle. The means of positional struggle developed gradually and depended on the methods of attack and defense used by the enemy. In addition to manpower, barbed wire and fire of all kinds have acquired enormous importance: rifle, machine-gun, mortar, artillery, hand grenades, etc.

The general revealed tactical miscalculations in the construction of the battle formations of the Russian troops: the troops stretched along the front, and the corps accounted for 50 km - of course, there was no deep construction. The enemy, having understood that technical means (especially heavy artillery) is the main thing - he accumulated these means, worked out new ways to use them. Moreover, the Anglo-Frenchmen were lagging behind the Germans in this respect, although they had more powerful artillery and technical equipment than the Russians. He noted that initially Russian troops had gone on the offensive without sufficient technical training, using the techniques of field warfare - losing sight of the fact that the enemy now consisted not only of manpower, but also of "land, iron and iron." And it is problematic to act with one manpower in a positional war.

P. S. Baluev not only revealed shortcomings - he made recommendations that boiled down to the following: 1) should have taken positions not random, but convenient for defense; 2) should work out the issues of strengthening the first line of trenches, trenches for private reserves, the device of the second defensive line (for divisional reserves) and barriers; 3) equipment observation points and artillery positions; 4) the army position should be no closer than such a distance, so that troops knocked down from positions can take it, calmly coming out from under enemy strikes (like the advanced ones, this position should consist of 3 lines); 5) Constant observation of the enemy and intelligence of all kinds are important; 6) Oborona must be based on both manpower and artillery fire — a sufficient amount of heavy artillery must be given to the troops; 7) there should not be any sharply outstanding positions - it is necessary to take into account the fact that the current troops are not sufficiently trained and susceptible to detours and coverage; special attention should be paid to the organization of wire obstacles (massive and high-quality); trenches should be man's height and narrow, with durable loopholes and dugouts, traverse should protect from flank fire; 8) trenches for private reserves should have strong points for the shelling of the 1 line and the approaches to it; 9) the terrain must be carefully studied, and enemy positions must be photographed from the air — and Russian artillery must be positioned so as to keep both enemy positions and approaches to their positions under fire; 10) artillery must obey the head of the relevant area; 11) part of the battery should specialize in setting a barrage fire; 12) the link between artillery and infantry must be very close - and in the advanced trenches, in addition to infantry, there must be artillery observers, etc.

The note could be the basis for the immediate reform of the forms and methods of combat use of Russian troops during the positional period of hostilities.

Thus, the “man-made” combat experience acquired with considerable blood was not in vain, and the Russian troops, shaking off their carelessness, prepared themselves for Brusilov's breakthrough more carefully, carefully and thoughtfully. And the result was completely different.

Ctrl Enter
Noticed oshЫbku Highlight text and press. Ctrl + Enter
We are
Reports from the militia of New Russia for 27-28 September 2014 of the yearAutomatic guns for armored combat vehicles. Point of view of a Western specialist
Military Reviewin Yandex News
Military Reviewin Google News
8 comments
Information
Dear reader, to leave comments on the publication, you must sign in.