Russian "Dead Hand"? It does not exist! 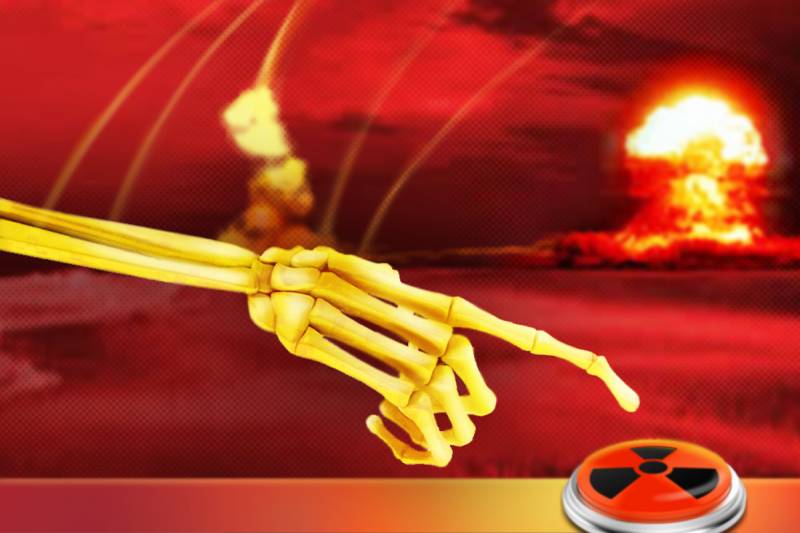 “There can be no personal computer. There may be a personal car, personal pension, personal cottage. Do you even know what a computer is? The mainframe is 100 square meters, 25 maintenance personnel and 30 liters of alcohol per month! ”
N.V. Gorshkov, Chairman of the USSR State Committee for Computer Science and Informatics, 1980

Deputy The minister of the radio industry, of course, exaggerated, but the overall level of electronics of that era is beyond doubt. To the extreme, primitive from the point of view of our time. The first domestic personal computer "Agat" (1984) is the bit width of 8 bits, the clock frequency is 1 MHz, the memory capacity of tens of KB is thousands, tens of thousands of times weaker than modern smartphones. In the depths of the military bunkers there must have been more productive "computing centers", but the possibilities were still limited. The level of technology began 80-x uniquely set the computer as a bulky machine with a ridiculous performance by today's standards.

At the hour of “X”, suddenly a wise computer would suddenly show signs of artificial intelligence. She was able to reliably analyze telemetry from the posts of the Strategic Missile Forces, the level of radiation and seismic activity in different parts of the country, the intensity of negotiations at military frequencies, the occurrence of point sources of ionizing and electromagnetic radiation at key coordinates (relevant strategically important objects in the USSR) and, having seen the death of all people who were in the bunker would independently make a decision on delivering a nuclear retaliatory strike!

This describes the principle of the “Perimeter” system. The Soviet “skynet”, the dead hand on the nuclear button, the “immoral” invention of the military. According to rumors, it was put on alert in 1985-86.

Before you argue about morality, you first need to find out whether such a machine existed?

In this stories too many discrepancies. In sources, including close to the official, there is a detailed description of the device command rocket, incl. GRAU indices, photographs and technical characteristics of its components are disclosed.

But it hardly reaches the “Doomsday Machine” (the main, according to the public, component of “Perimeter”), dead silence reigns. Sources (books, monographs, statements by officials) who previously described the rocket eagerly, do not say anything about a system capable of making decisions automatically. Nothing at all.

You will think about secrecy. Where was the secrecy, when told in detail about the command rocket?

Silence looks suspicious against the background of the world presentations of Avangard, Sarmat or the Voronezh radar radar systems, which reveal the appearance and main characteristics of these systems.

Much is known about the structure of the Strategic Missile Forces and the missile attack warning system. The press openly talk about the system "Kazbek" (nuclear briefcase); at least, one can grasp the general meaning: several people from the country's top leadership have the opportunity, using the mobile terminals of Kazbek, to trigger the nuclear arsenal of Russia.

Known in general terms, the composition of the space group SPRN "Eye". At least, no one tries to hide the number, type of orbit, and even the military designations of satellites.

In the open press, you can find, for example, the following data: in December of the 1990 of the year in the 8 th rocket division (smt. Yurya) a regiment (commander - Colonel S.I. Arzamastsev) took up combat duty with a modernized missile system called the "Perimeter-RC", which includes a command missile, created on the basis of the ICBM RT-2PM Topol.

What about “Dead Hand”? No

Publications, referring to each other, reprint the same set of phrases about “supercomputer” and “complex sensor system”. Let me know the source?

The only one who spoke about the “Doomsday Machine” as a ready-made, adopted system, was a retired colonel V.Ye. Yarynich, with 2001, a professor at the University of California San Bernardino. The same excerpt from his interview is given in each article on the “Perimeter”. And more ... And nothing more.

The tale has gained incredible success. In the best laws of the genre: and mysticism, and blood, and horrors.

Against the background of the bloated “sensation”, the statements of other scientists passed unnoticed.

In 1993, the former. Viktor Surikov, deputy director of TsNIIMASH, said that in the USSR they thought about creating an automatic launch system based on seismic, light and radiation sensors, but noted that the project was ultimately rejected by Marshal Sergey Akhromeyev and was never put into practice.

A bold dream, turned by the efforts of journalists into a “sensational news".

If you look at things in a logical plane, then one of the main damaging factors of a nuclear explosion is always called an electromagnetic pulse, disabling electronics. How did the cumbersome 1970-80 x development computers. could have sufficient combat stability in a nuclear war?

Suppose an invulnerable computer can survive a blow. Absurd, but oh well. The whole “dead hand” story is absurd.

Suppose a computer in a bunker survived. But what will remain of the “complex system of sensory sensors on the surface for measuring seismic activity, air pressure and radiation,” over a large area?

Try to estimate the probability of a direct hit of ABC in the area where the bunker with the electronic components of the “Dead Hand” is located. The probability is the same as for the other command posts of the Strategic Missile Forces.

As you can see, I deliberately do not mention the name “Perimeter” here. Because a system with such a name really existed, but performed a completely different task.

Outdated backup at the moment communication system The Strategic Missile Forces, about which its creators are not ashamed to speak.

“Perimeter” (index URV Strategic Missile Forces - 15E60) was designed to ensure that combat orders from the highest levels of command (General Headquarters of the Armed Forces, Administration of the Strategic Missile Forces) were sent to command posts and individual launchers of strategic missiles in the event of damage to the main lines of communication.

The essence of the invention - radio transmitter mounted on a ballistic missile: flying over the territory of the USSR, the command rocket transmitted the signal about the beginning of the war to separate command posts and launchers of ICBMs.

The main scientific achievement in the process of creating a “repeater rocket” is to ensure reliable reception of a signal from an ICBM flying in near space, in the absence of a stable (and even reference) orbit.

The command missiles of the 15P011 “Perimeter” complex, having the 15А11 index, were developed by the Yuzhnoye Design Bureau based on the 15А16 missiles (MR УР-100У). Equipped with a special head 15B99, containing radio engineering command system developed by the OKB LPI, designed to ensure that the combat orders of the central command post are sent to all command posts and launchers under the conditions of exposure to nuclear explosions and active radio-electronic countermeasures, during the flight of the warhead in the passive trajectory section. The technical operation of the missiles is identical to the operation of the 15А16 rocket. The 15P716 launcher is a mine, automated, highly protected, OS type, most likely an upgraded OS-84 PU. Do not exclude the possibility of basing missiles in other types of launch pits. Development of a command missile launched by the TTT Ministry of Defense in 1974 year. Flight design tests were conducted at NIIP-5 (Baikonur) from 1979 to 1986. A total of 7 launches were conducted (of which 6 was successful and 1 was partially successful). Mass of warheads 15B99 - 1412 kg.
Missiles and spacecraft design office "Yuzhnoye" / Under the general ed. S.N. Konyukhova, 2001.

An image of the command missile 15А11 is always attached to each material devoted to the “Perimeter”. 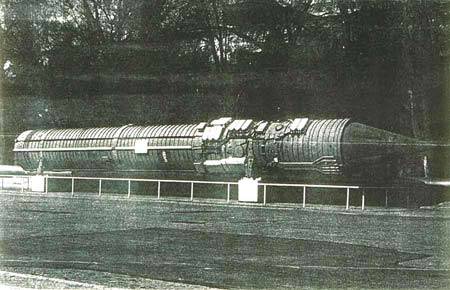 As for the popular legend about “computer-killer”, the majority of materials focuses precisely on “automatic decision making”. Neither the authors nor the public at all think that the stated topic and the argument (a detailed description of the command rocket) do not correspond to each other. "Today we will study physics, so let's talk about chemistry."

Nobody thinks about the possibility of creating such a developed computer center with AI signs on the Soviet element base of the end of 70-x - the beginning of 80-x.

None of the combat survivability of the system and its components (located on the surface of the sensors and data transmission channels with a length of hundreds, if not thousands of kilometers) in a nuclear war.

Not about the very meaning of the existence of a “dead hand”: after all, the operability of communication systems also means the existence of a connection between command posts, which enables the military to make decisions about a strike without the help of any machine.

Sometimes the argument is “American equivalent” - AN / DRC-8 Emergency Rocket Communications System, which really was a direct analog of the Soviet “Perimeter”. In technical terms, the complex consisted of missile transmitters assembled on the basis of the Minuteman-2 ICBM, and, of course, had nothing to do with “killer computers”. The illustration shows the head of the command rocket. The ERCS system was removed from combat duty in 1991. 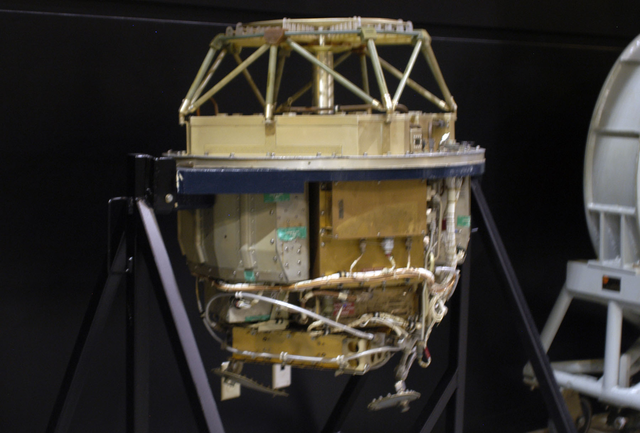 You will not believe! But in the USA there existed its own analogue of the “dead hand”. Unfortunately for fans of martial arts fiction, the Looking Glass system looked extremely primitive, despite all the achievements of Apple, Microsoft and IBM.

In an effort to prevent the destruction of stationary command posts by a preemptive strike, the Americans dispersed control, organizing additional (reserve) command posts on board the aircraft. EC-135C, continuously replacing each other, spent years in the air 29. The last “Doomsday Plane” landed on July 24 1990 of the year.

Currently, the UK has its own “dead hand”. On board the submarines with ballistic missiles (SSBN) stored sealed letter to the Prime Minister with instructions for a nuclear war. The exact content of the letter remains a secret, experts only voiced speculation. Among the most reasonable assumptions are considered: a retaliatory nuclear strike, refusal to strike, actions of the commander at his own discretion, or transfer under the command of the allies.

Doubts about the existence of the “Dead Hand” as an automatic decision-making complex will certainly cause a wave of criticism among those who are used to believing this legend. I just wish the criticism was reasonable.

After all, in fact, the only confirmation of the “Dead Hand” is an unofficial interview with Wired magazine. Everything else is his endless interpretations in the absence of other evidence. Nothing is known about the mythical system, and its principle of operation and the need for existence contradict both the known facts about the Strategic Missile Forces and the capabilities of the 1970-80-x computers.