"We have long been silently retreating ..."

April 9 2018
135
The policy of appeasing the aggressor has once proved its complete incapacity and turned into colossal sacrifices for our people and all of humanity. 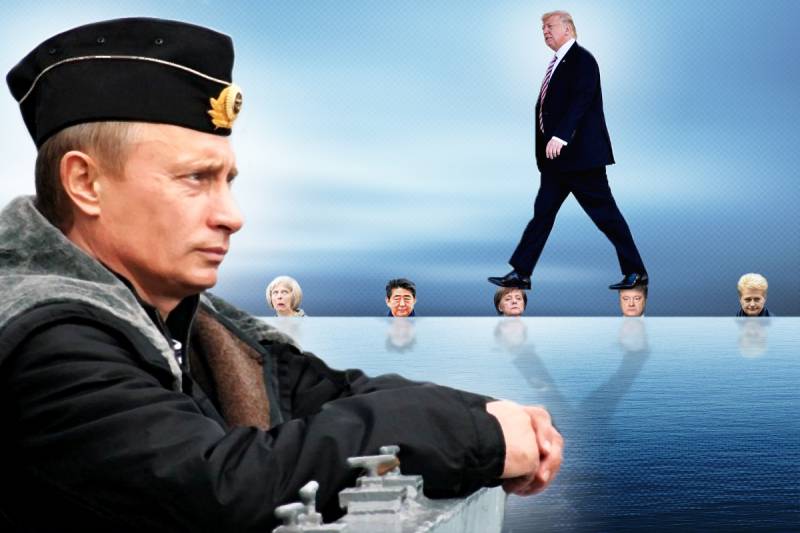 In some Russian editions, words of gratitude were voiced by US Permanent Representative to the UN, Nikki Haley, for her direct admission: Russia will never be a friend to the USA. Like, you can now breathe a sigh of relief. At last everything became clear! And those who harbor illusions about the possibility of becoming friends with America are now cruelly confounded and roughly punished for their naivety.

Meanwhile, in my opinion, such a "discovery of America" ​​could have been accomplished only by a completely brainless idiot. If we assume that such people are generally found in Russia. Because Haley said absolutely nothing new compared to what we have known well since at least the middle of the 19th century, when the then British Prime Minister Palmerston uttered the following coined phrase: “England has no eternal allies and constant enemies - only hers are eternal and constant. interests! ".

I will say even more: there is not a single sovereign country in the world (Ukraine does not count), which is true to anything and anyone other than its own interests. So if someone in Russia, because of his own stupidity or the desire to deceive his neighbor, propagated such obvious nonsense, and now he was disappointed in him, then he needs to see a doctor.

The United States demonstrates an absolutely natural policy for any state — strict adherence to its own interests as they understand them. At the moment, they are fully confident that Russia must be crushed with all its might until the desired result is squeezed out. Why are they so sure of this, I will not say for sure. Perhaps they are betting on the internal scrapping of the Russian elite, which has been restrained by the sanctions, which, they say, all as one, will take up arms against Putin and overthrow the Russian power hated by America.

Or maybe they interpreted as a sign of the obvious weakness of the Russian Federation, the goodwill of Moscow and its desire to settle relations, even in those cases when the States themselves, by virtue of their warlike traditions, would have started throwing Tomahawks a long time ago.

Anyway, they continue to build up pressure in the clear conviction that this is the best strategy for Russia today. As part of this course, things that are unprecedented for Russian-American relations, not to mention Soviet-American times, are happening today.

For example, the other day, the American White House announced with admiration for ease that it would continue to prepare for the meeting between Trump and Putin, despite the regular sanctions imposed against the Russian Federation.

Translating this Washington casuistry into normal Russian, this means that for the first time in stories relations of the two countries, the United States intends to prepare a summit in an atmosphere of blackmail and pressure on Moscow, apparently considering this as the most suitable background for such a summit. Is it necessary to clarify that not a single Soviet and, let us hope, not a single Russian leader, would never under any circumstances go to a meeting in such humiliating conditions of naked foreign dictate. What would mean nothing more than Moscow’s full acceptance of such arrogant American behavior. And an unprincipled readiness, despite the obvious lawlessness on the part of overseas counterparts, to continue to conduct a constructive dialogue with Washington.

It is clear that the United States views its sanctions attacks on Russia precisely as the right background for a future summit. And they very much expect to turn it into a platform in order to document the kneeling position of the Russian Federation. It happened once with Gorbachev, why not try one more time?

By the way, in overseas the news Preparation of such a meeting is dominated by the theme of calling Putin “on the carpet” to the White House, which is a common practice of the American hegemon in dealing with his vassals, clients and other second-rate, in the US opinion, characters.

Where a horse with a hoof, there and cancer with claws. Washington’s rampant pressure on Russia is becoming a model of behavior for American geopolitical mongrels, such as the Ukrainian puppet regime. The recent unprecedented act of state maritime piracy, the seizure of the Russian fishing vessel with the whole crew in international waters of the Sea of ​​Azov, is a direct continuation of this American policy, and perhaps even a direct request from Washington in the intention to once again “feel Russia over the udder”.

There is no reason to doubt that this is a test action designed to test the possibility of delivering new unpunished strikes in the Russian Federation. For the Kiev regime itself, this is generally what the doctor prescribed. Because for him a confrontation with Russia, up to a full-scale war, is the only chance to extend his days. For in peacetime, this absolutely dead-end regime for Ukraine is completely doomed.

To expect from our overseas "partners", not to mention their local chain dogs, that one day they suddenly give way to anger at the mercy, and start just like that, live well, offer friendship and love to Russia instead of sanctions and total suppression , can only complete and hopeless idiot. Like those who still believe in the possibility of some kind of platonic "friendship" of different states, Russia and America or someone else.

Yes, the motives of the leadership of the Russian Federation, which with the utmost restraint reacts to enemy provocations, are completely understandable. Russia, like any other normal country, capable of earning a living by honest labor, even if it is a disreputable sale of its own resources, is not interested in confrontation, and even more so in war. There is no “Russian aggression” - this bogey, invented by Western propaganda, in order to shift the responsibility of the West to support the armed coup and the overthrow of the legitimate power in Ukraine, does not exist in nature. That is why Russia seeks to limit as much as possible the negative effect of the aggressive actions of the West in Ukraine and prevent its escalation into an opposition of too large scale.

But does this strategy work in conditions when the geopolitical adversary is set up exactly the opposite - on the full kindling of confrontation and on the organization for this purpose of more and more new provocations? In this sense, there is no doubt: if the Kiev regime and its Washington owners get away with its current act of international robbery in the form of stealing Russian fishermen into captivity, the next one will not take long to wait.

And it can be anything, from the breakdown of energy cooperation between Russia and the countries of Western Europe to torpedoing, even at the very last moment, the World Cup in Russia. And from the arrest of Russian property abroad to the announcement of all Crimean residents on the international wanted list as state traitors, with their arrest and extradition to Ukraine in the event of any departure from the Russian Federation.

Today, a lot of things are being offered as a reaction to the same bandit actions of the Kiev regime against Russian sailors. From the counter arrest of the Ukrainian courts in this area to the complete blockade of the city of Mariupol from the sea, which paralyzes the export of products of its metallurgical plants - until all the prisoners are released without any conditions and judicial decisions.

It’s not for me to give advice to the Russian leadership on how to act in this situation. Putin’s state wisdom, his ability to accurately calculate his steps, choosing the best time and place for them, are well known and have been proven in practice more than once. That is why those completely understandable and fair emotions that all normal people experience at the sight of the bandit lawlessness that is going on in relation to Russia should not obscure our mind. Because, quite possibly, it is precisely such purely emotional and poorly calculated reactions from Moscow that are waiting to catch the Russian Federation on some kind of purely emotional breakdown.

But you should always remember about the other side of the coin. Once, in June 1941, we did exactly the same thing. That is, they stubbornly did not succumb to the provocations that the Nazis regularly arranged for the Soviet Union. And what did you get in the end? And they got that Hitler was so convinced of his own impunity that he declared our country a colossus on clay feet and ordered his troops to defeat the USSR within two to three weeks.

I will not remind you of the cost of which victims our people managed to convince the demoniac Fuhrer of the Third Reich, who was convinced of our inability to give the Nazi aggressor a fitting rebuff. And God forbid us to bring the self-confidence of the present West to Hitlerite proportions. Because the correction of this error will cost even more blood than last time. If after this on Earth there will be someone to sum up.Read more...

Ctrl Enter
Noticed oshЫbku Highlight text and press. Ctrl + Enter
We are
A great interview with Sergey Lavrov: about Ukraine, Obama and IranWhat you didn't want to know about England
Military Reviewin Yandex News
Military Reviewin Google News
135 comments
Information
Dear reader, to leave comments on the publication, you must sign in.