April 7 2018
49
Economists know that the drug trade in profits is the third after oil and oil trade. weapons. Let us remember this fact for now. We emphasize that this giant drug resource is located in the territory of Afghanistan - a country with a large contingent of US and NATO troops. The end justifies the means, and the laws of the market turn out to be in the current economic order above the laws of juridical and especially moral. 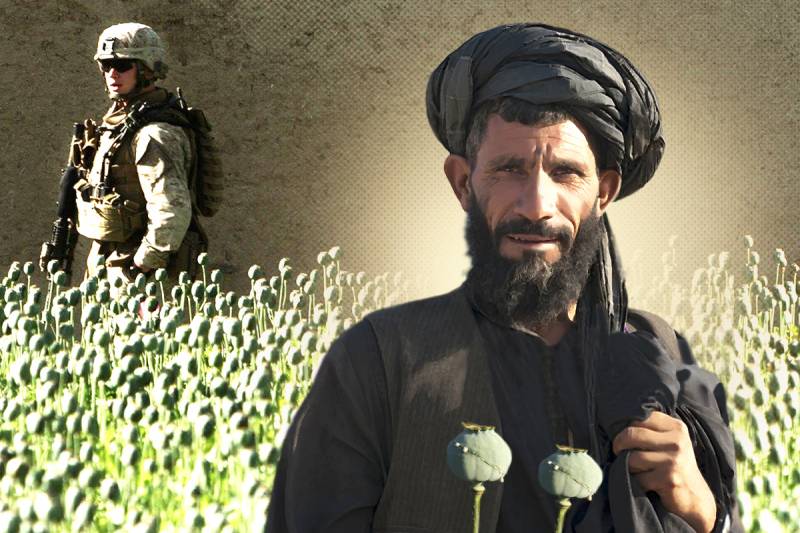 Afghanistan is now in first place in the production of drugs. And if before there was produced a crude drug, opium, but now it is processed in the same place into heroin. This is advantageous from the point of view of the drug business, because heroin has smaller dimensions, which simplifies the smuggling process. According to experts, at present, the share of Afghanistan in the global heroin market is 92%.

According to UNODC, the area of ​​opium plantations is 193 thousand hectares. The revenues of the Afghan drug barons in 2007 year exceeded 3 billion dollars. Opium accounts for 52% of Afghanistan’s GDP. This is called drug economics. Afghanistan is already ranked as a new type of state - drug states. We can say that it was the United States that gave rise to this specific type of pseudo-state.

According to experts, 90% of all heroin sold in Russia comes from Afghanistan, and under the cultivation of crops that serve as raw materials for drugs, more land is occupied in this country than in Colombia, Bolivia and Peru combined.

You ask: for what purposes is heroin imported into our country?

The answer seems to lie on the surface. This is a very profitable business, but not only.

Drugs are a kind of biological weapon. This is a war against the millions of victims of the destroyed population of the enemy in the country of use and the billions in revenues earned from the victims of such aggression. The enemy in this war himself pays his own destruction when the aggressor receives super-profit, more than compensating for his own expenses for the conduct of hostilities.

That is what Napoleon Bonaparte used in the occupied lands: "The war must feed itself." According to this principle, wars were held with the participation of Western "partners", for example, in oil-producing countries: Libya, Iraq and Syria. The so-called “Islamic State” (ISIS), banned in Russia and successfully defeated by our videoconferencing system in Syria, has grown and fed at the expense of selling oil from the occupied territories. The money went to buy weapons, pay for the services of foreign instructors, pay militants, recruit new fighters, etc. Self-sustaining such a project, very profitable.

The war itself is a good market for trading ammunition and weapons. And the more wars there are, the more demand there will be. The United States is the world's largest arms exporter, and the armaments produced by their industry must be sold to someone. World peace is a nightmare for militarists and a loss for defense.

Moreover, in this war they do not need victory in the usual sense of the word. They need chaos, destroying statehood, erasing borders. The chaos that they, together with NATO, arranged in Yugoslavia, in Kosovo, turning this historical center of Serbian Orthodoxy in a drug trafficking point.

But back to the systematic destruction of the population of the country through drugs.

A bit of history. The British-American transnational drug transit scheme, which had been operating for almost two hundred years, was very simple and effective. The British East India Company (BOIC, the first persons of the British Empire - lords peers became members and shareholders) monopolized the industrial production of opium in Bengal, the former part of the British colony of India. It was they who began to form drug civilization in China.

Initially, the company established the “Chinese internal mission”, whose task was to add to the opium of the Chinese peasants through the promotion of opi-smoking. This created a market for opium, which was filled by the British East India Company. From 1792 to 1817, the number of imported opium increased from 320 tons to 480 tons a year, and in 1837, this figure was already 3200 tons. In proportion to the importation of opium, drug consumption in China increased to enormous proportions. This created a vicious circle, as a result of which the richest India and China became impoverished rapidly, falling into increasing dependence on England. The drug trade, coupled with cotton speculation, became the foundation upon which British and American trade grew and flourished, and with it the economic power of the British Empire and the United States.

In China, a powerful stream of opium went through the missionaries, seizing one major city after another. The ships of the East India Company did not have time to load in India with opium and unload in the largest ports of China. Opium kilns bred in China as locusts, slowly killing its population. At the same time, the opium trade pumped out huge amounts of money from China, hindering the development of this country.

But China managed to survive and not become another colony of England, but Afghanistan was less “lucky”, and it was colonized by England for 40 years from 1879. on 1919

As a continuer of the cause of the British Empire, the United States acts in a similar way.

Thus, after the establishment of "democracy" in Iraq and Afghanistan, state control over drug trafficking decreased, and the fight against their spread was ineffective. Drugs there today can be bought almost freely, which leads to mass consumption, an increase in the number of drug addicts.

According to reports, in 2007, Afghanistan produced 8 200 tons of opium. The area of ​​opium poppy plantations this year has increased to 193 000 hectares. 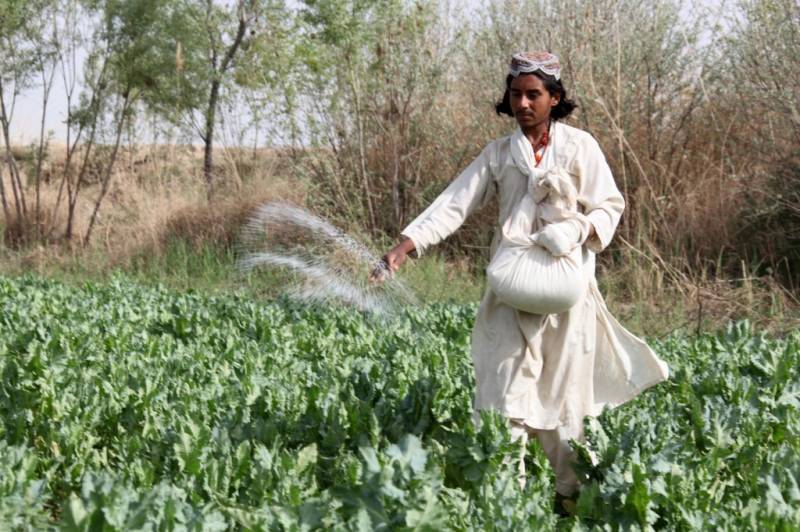 In 2014, an agreement was signed between Afghanistan and the United States, according to which part of the NATO group remains in the country after the end of Operation Enduring Freedom, in order to assist the Afghan police in the fight against anti-government groups. In 2017, it became known about plans to increase the number of troops in Afghanistan to 15 000 people in the framework of the current mission due to the deterioration of the situation in the country (by February 2017, the authorities controlled less than 60% of the territory).

But how effective are the measures of the "struggle" of the NATO group against the production of drugs? Judge for yourself. After the invasion of US and NATO troops, drug production increased 40 times (from 2001 to 2014). According to the UN Office’s annual report on drugs and crime (UNODC), presented in Vienna, the size of agricultural land in Afghanistan occupied by opium poppy acreage reached a record size of 328 thousand hectares, an increase of 63% in a year. "This level of opium poppy cultivation is a new record since the start of systematic monitoring (in 1994) and exceeded the previous record of 2014, with thousands of hectares, or 104%, of 46," the document says.

According to the study, over the past year, opium producers in the country managed not only to expand their activities in existing regions, but to capture three new regions: Samangan, Ghazni and Nuristan. Most actively opium poppy is grown in the southernmost province of Afghanistan - Helmand. At the same time, opium production in 2017 could reach 9000 tons.

It is profitable for Afghan peasants and farmers to sow poppy seeds, since it is 10 times more profitable than the same wheat planted on an equivalent plot. And most importantly, the poppy does not require such care and regular watering, like wheat. As the Afghans say: “I planted and forgotten”, which is very important in arid areas of the country.

Today, it is Russia and the EU countries that are the main victims of heroin coming from Afghanistan. It is noted that the rapid growth in drug use in Russia in the last ten years has occurred precisely at the expense of drug trafficking from Afghanistan.

The Internet got picturesque photographs in which we see US marines guarding the plantations of flowering poppy. 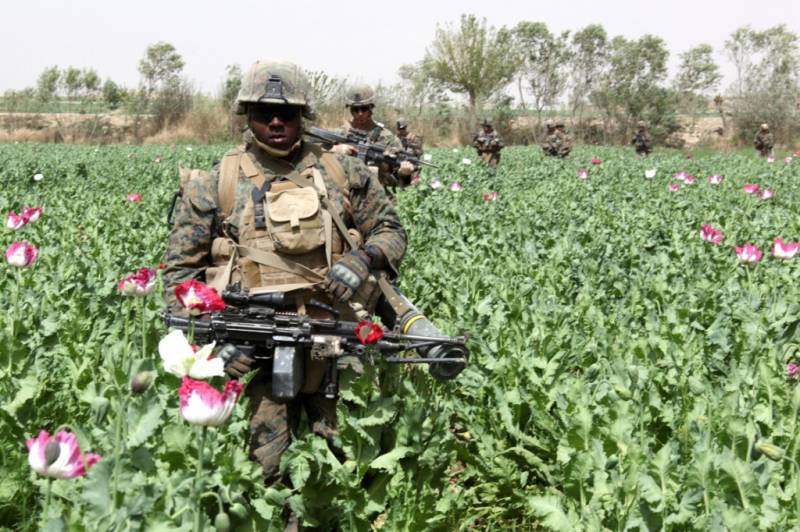 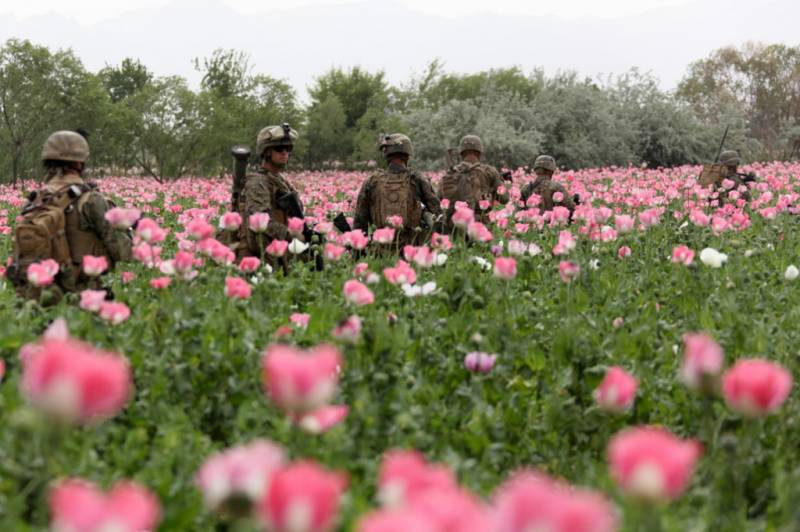 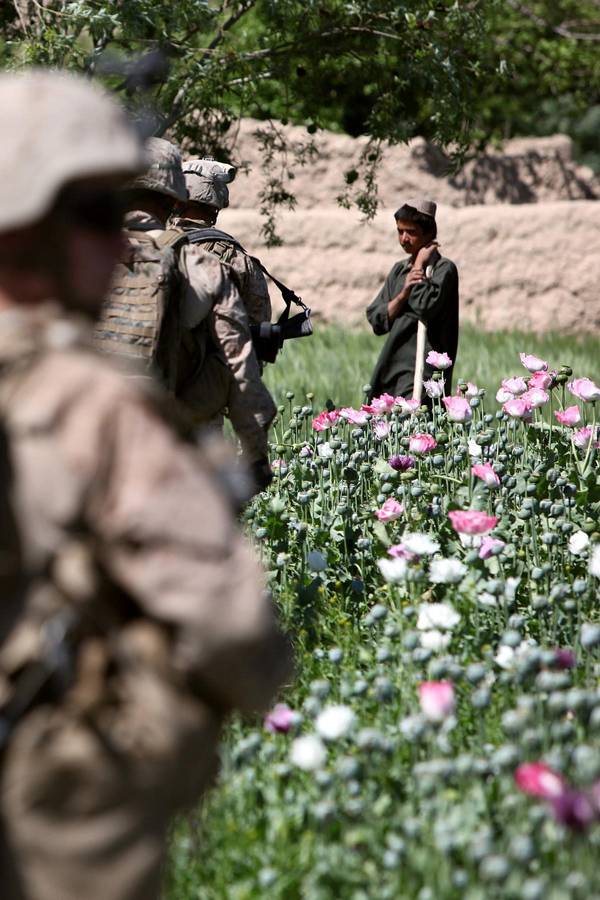 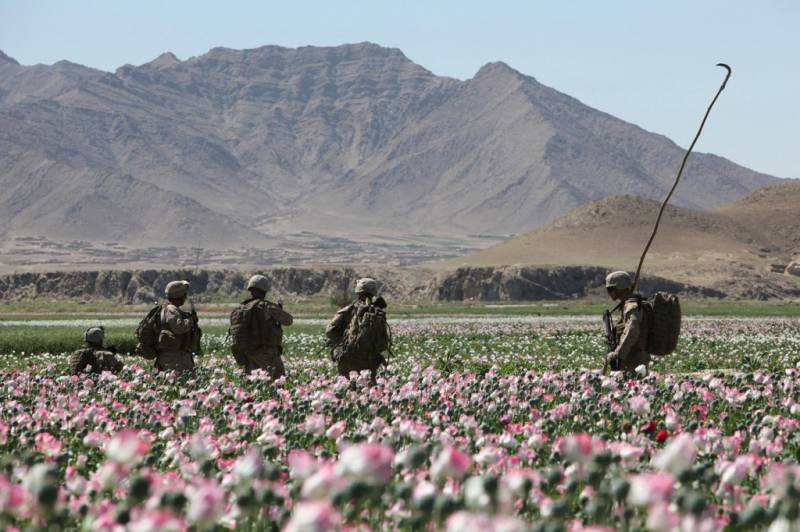 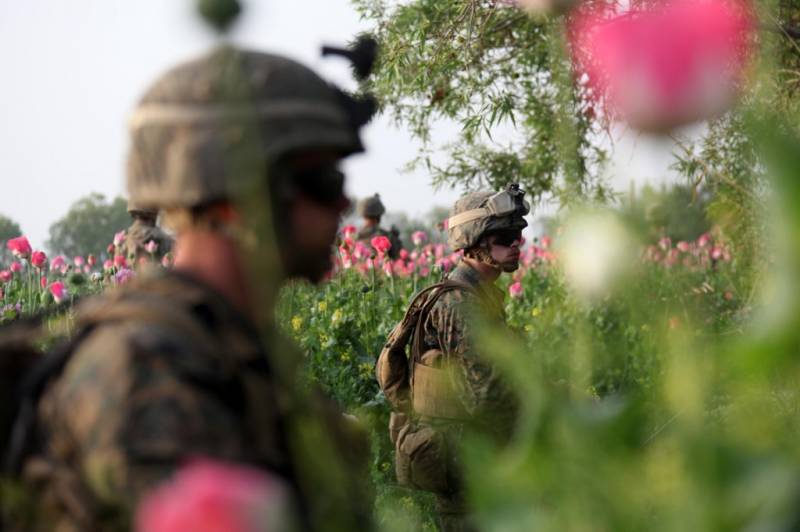 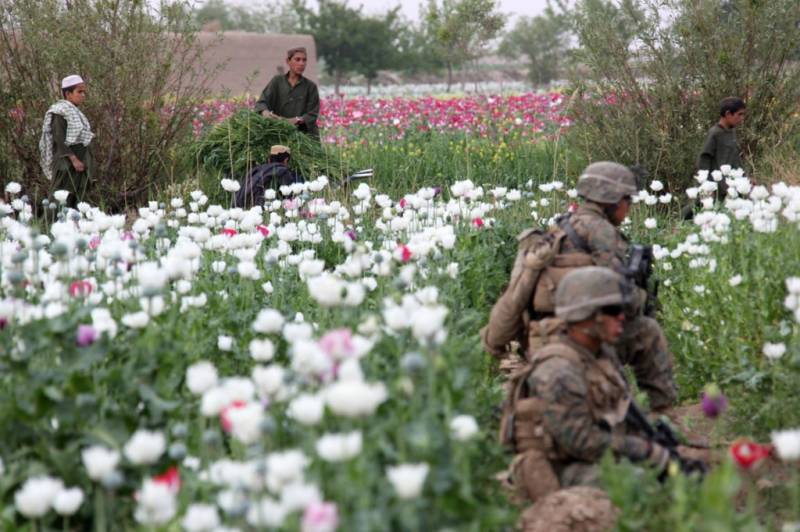 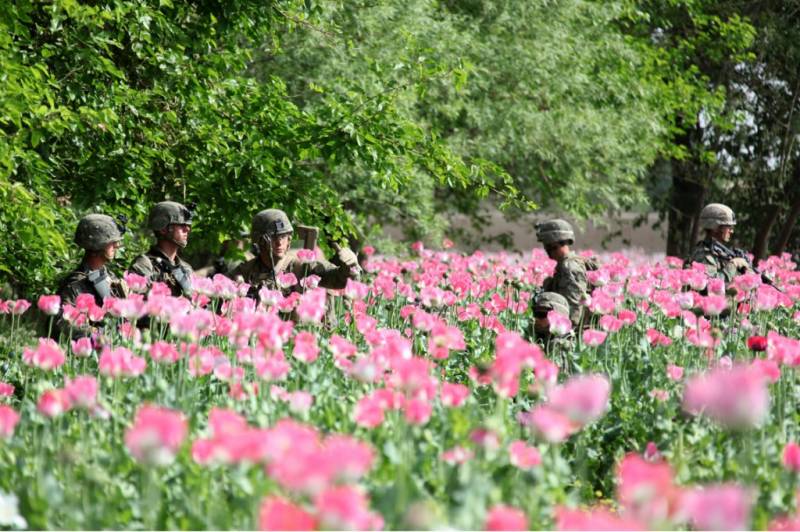 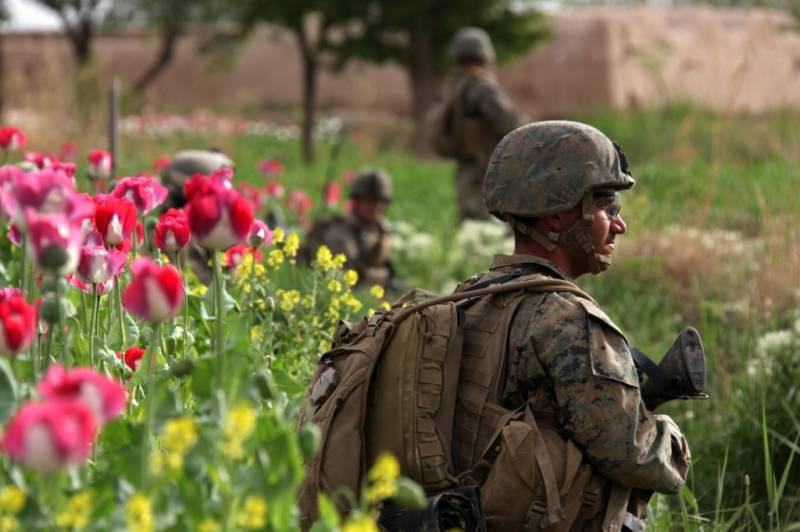 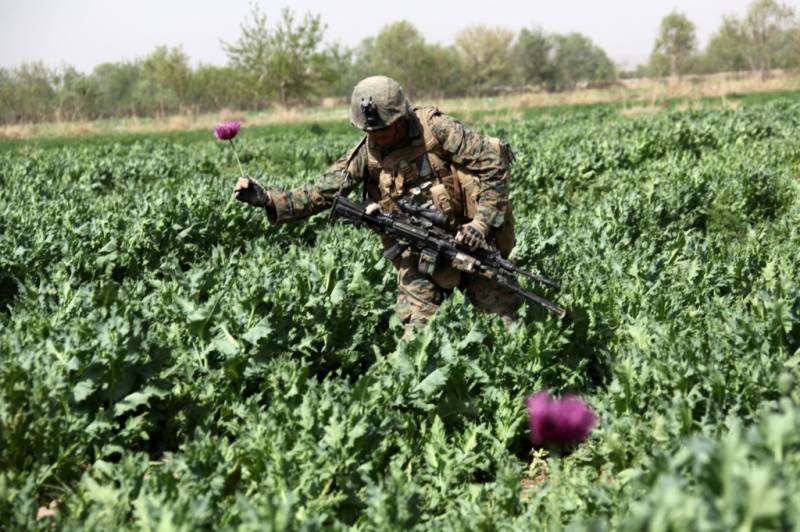 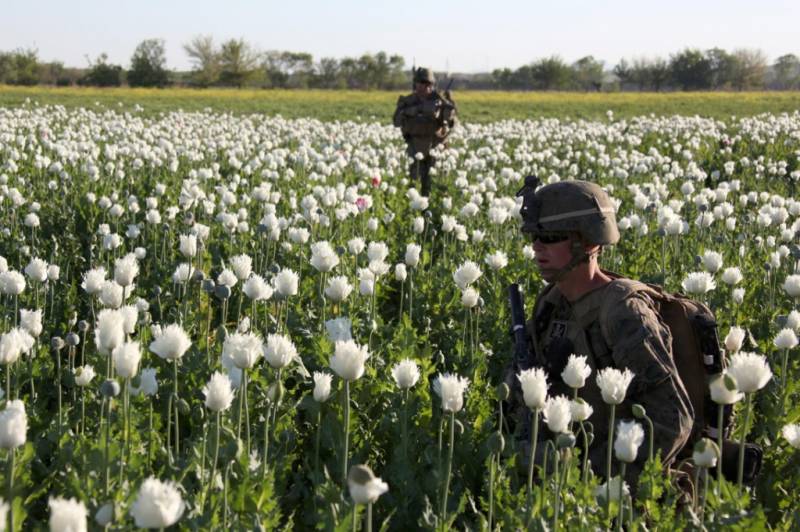 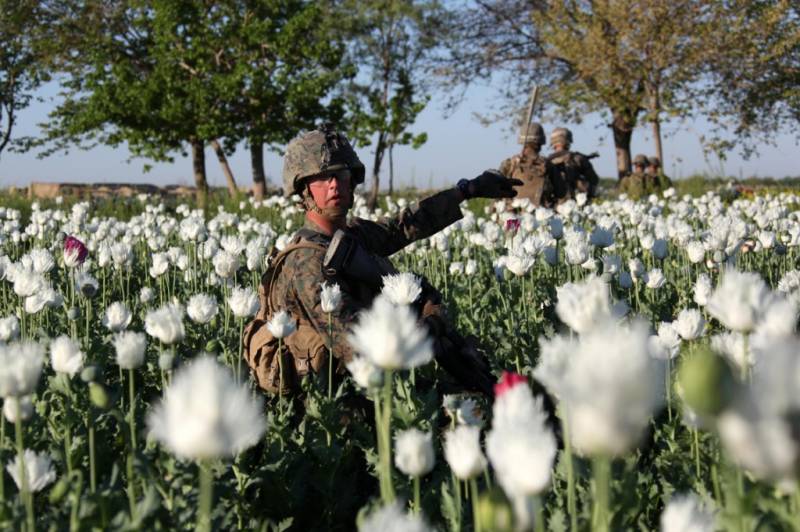 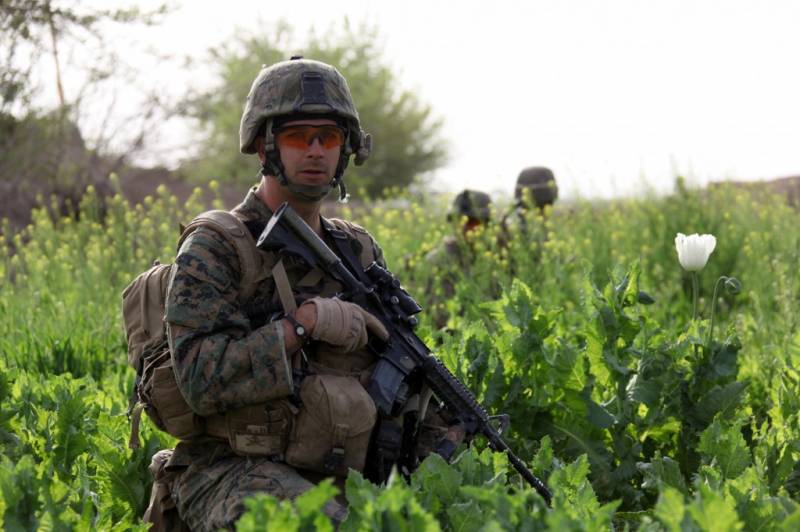 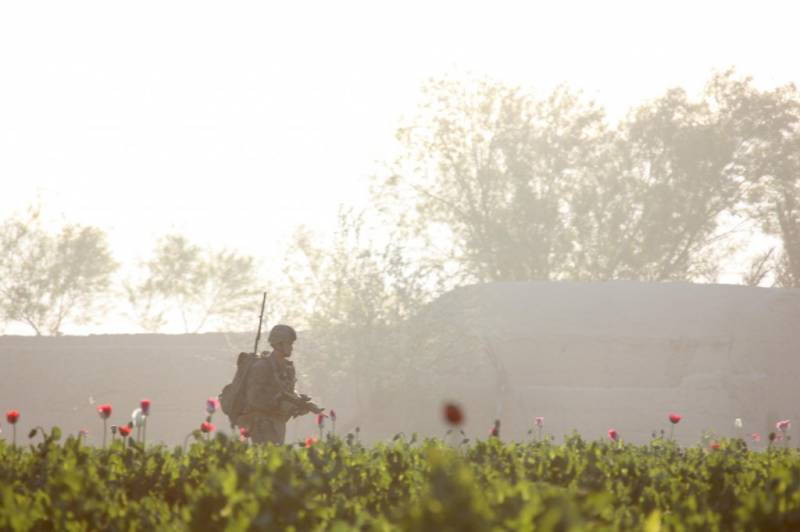 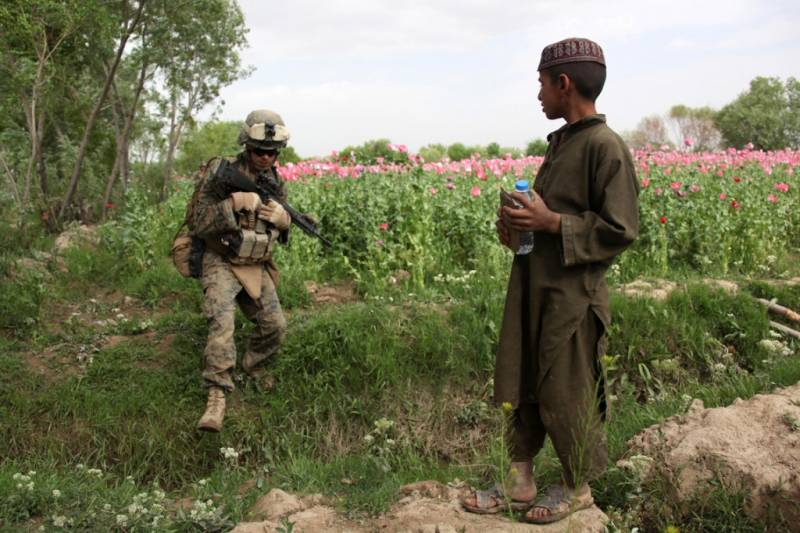 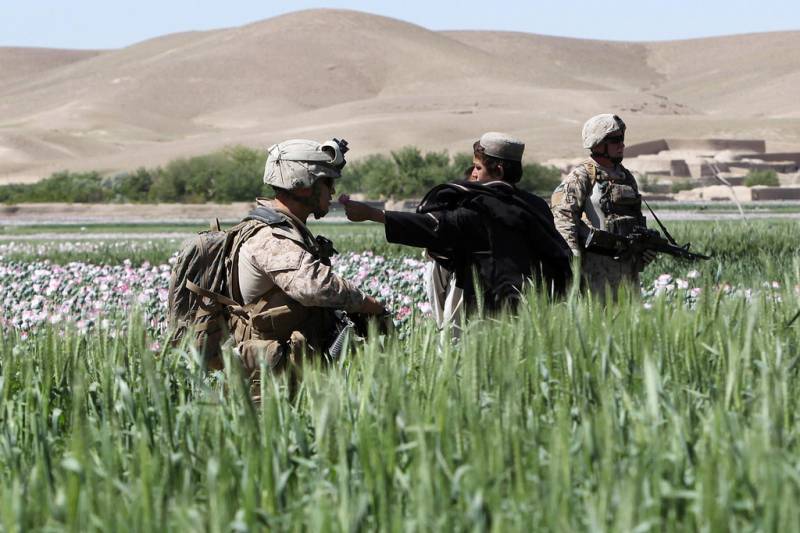 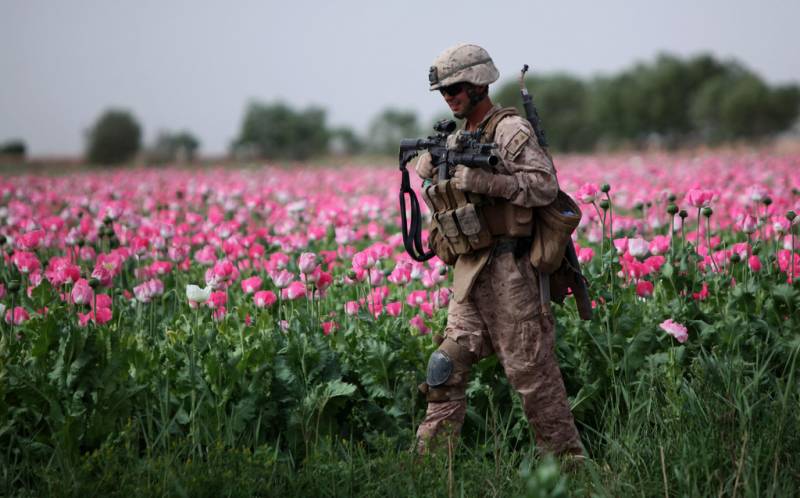 Why cut the goose that lays the golden eggs? And the US and NATO occupation forces in Afghanistan took control of drug trafficking, the production and sale of drugs. Most observers are inclined to believe that drug trafficking on the territory of Afghanistan is controlled by Washington and that "products leave the country aboard American aircraft."

Tajik intelligence reveals 400 laboratories for heroin production in Afghanistan. At the same time 80 of them are located right along the Afghan border with Tajikistan.

Drug trafficking is protected. There are numerous documented evidence that the CIA plays a central role in the development of Latin American and Asian drug triangles. The structures specially created for this purpose are still under the protection of American intelligence, acting in cooperation with NATO forces in Afghanistan and the British armed forces.

The flow of drugs from Afghanistan through Central Asia spills over into Russia. It is our country that turns out to be the main object of a new form of aggression - drug aggression, undermining the foundations of statehood and aimed at destroying the demographic potential, not only of the present, but also of the future generation.

The drug and arms trade is an important part of the strategy of destabilization, which is being implemented by the United States not only in Asia, but throughout the world. The distribution of drugs and the drug use of the population is considered and used as an effective form of mass control and their zombies. First of all, this applies to young people. According to official statistics, there are about half a million chronic drug addicts in Russia. According to experts, at least a minimum of 200 people die every day from a drug overdose in Russia, and up to 80% of Russian drug addicts are minors and young people.

That is, drugs mean not only a demographic war against the peoples (by the way, against their own American people too), but also preparation, and the conduct of the real armed war itself, of the very war against statehood as such.

For them, Russia is a huge potential market for this potion. While it is limited to state control. If in some way you change the regime here and bring the pro-American anti-national government to power, this colossal market will be opened, and the whole territory can be easily overwhelmed with drugs. That is why such attention was to the past presidential elections.

Only a country that has the will and strength to fight the spread of drugs will be able to survive in this war. An example here is the experience of China, India, Iran. Russia also did not stand aside. According to some reports, the Taliban have received Russian weapons and are resisting NATO forces in Afghanistan. Russia donated a batch of modern weapons to Tajikistan to strengthen border control with Afghanistan. Of the recent reports of a change of leadership in Dagestan and the redeployment of a naval base from Astrakhan to Kaspiysk, one can judge of Russia's intention to block one of the drug trafficking channels passing through Turkmenistan to Azerbaijan and Makhachkala. 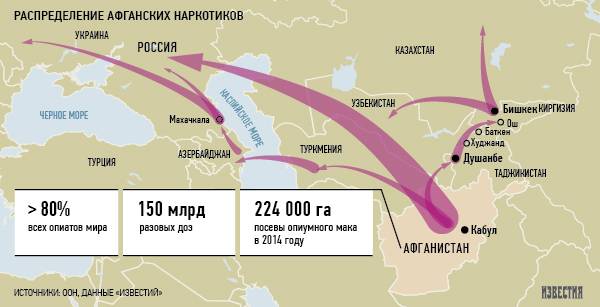 But one should not rely only on the power and law enforcement bodies of our country. They work in full force, but we are also able to provide all possible assistance.

You saw in your area on the walls and fences messages about the sale of spice and other rubbish (look something like this: “Salt” is a telephone) or on the Internet (“Samples” and @ address), erase or paint over these ads, because it’s easy.

Law enforcement officers are also working on this, but the ads appear again and in other places, social networks and instant messengers. Do not be indifferent! Next time your children can get into the network of distributors of narcotic poison.
US troops guard poppy fields in Afghanistan