The situation in Syria. CAA forces in Daraa and Quneitra

April 6 2018
13
The CAA forces in the provinces of Dar'a and Quneitra. In the sweep of the territory near Damascus, the soldiers discovered a handicraft factory for the production of explosive devices. Reports about it FAN with reference to Syrian sources. 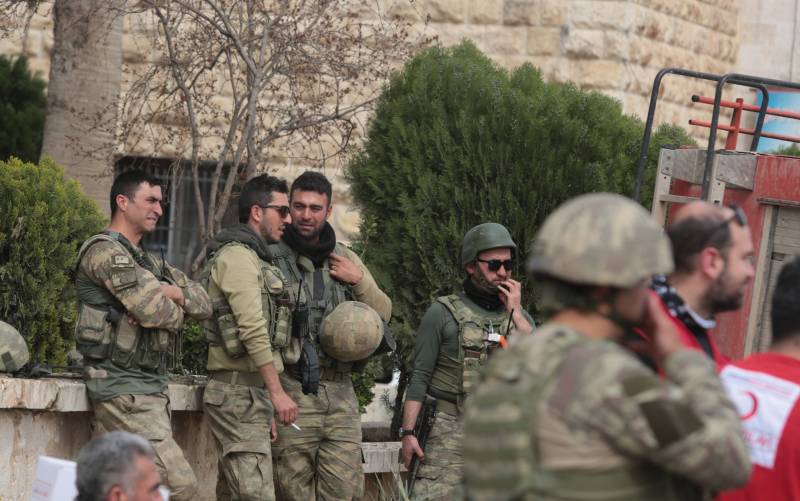 Several buses arrived in the Duma to evacuate the new party of the opposition Jaish al-Islam group and their family members. Militants laid down weapon and surrendered to the CAA, in return for having the opportunity to freely leave the region. At the end of the day, it became known that among the radicals, a conflict broke out over who was the first to leave East Guta. Due to the aggravated situation, their withdrawal from the region was suspended. The Syrian army continues to sweep the outskirts of Damascus. During the inspection of the settlement of Sakba, the soldiers discovered a makeshift factory for the production of explosive devices and ammunition of militants.

The command of the Turkish armed forces issued a statement in which it promised to knock out the fighters of the Syrian Democratic Forces (SDF) from the city of Tel Rifat as quickly as the pro-Turkish forces managed to capture the Kurdish canton of Afrin. Meanwhile, another convoy with militants taken out of the Duma, reached the city of Azaz in the north of the province of Aleppo. According to a local source, more than 50 thousands of surrendered radicals and their family members have already arrived in the region.

The fighters of the Syrian Democratic Forces (SDF) opened fire on the strongholds of the "Islamic State" (IG *, grouping banned in the Russian Federation) in the east of Deir ez-Zor province. Recall that the increased activity of the IG gangs is observed in areas of the region captured earlier by pro-American Kurdish troops. The Kurds did not carry out the work of stripping this part of the province of "sleeping cells", which gave the terrorists the opportunity to prepare for new attacks.

A new reinforcement of UAR government troops arrived in Dar'a province. In the vicinity of the administrative center of the region, exchanges of fire continued between the SAR army and illegal armed groups. In the evening, radical groups opened fire on the peaceful neighborhoods of the capital of the region. A local source reported that children were injured as a result of radical actions.

The Russian Aerospace Forces continued to deliver targeted attacks on the strongholds of the terrorists Jebhat al-Nusra * (banned in the Russian Federation) in Idlib province. Aviation attacked the positions of the Islamists in the vicinity of the settlements of Khas, Serakib, Al-Bara, Sufahon, Deir Sunbul and Kafr Nabeul. The Turkish Humanitarian Aid Foundation has arranged the installation of 350 more tents for the temporary residence of former militants and their families who surrendered weapons during battles with SAA in East Ghouta.

Russian aviation attacked the locations of Al-Nusra terrorists in the western part of the province of Hama. Also, the Russian Space Forces continued their work in the north of the region in the vicinity of Al-Latamin and Kafr Zetas. At the end of the day, the Syrian army, with the support of the Russian Aerospace Forces, regained control of the settlements of Kabikh, al-Mushah, Zor al-Jamkaliya, Zor Abu Darda.

A column of military equipment of the Syrian Arab Army (CAA) arrived in the buffer zone with Israel in Quneitra province. Sources report that government forces are preparing for a large-scale operation against illegal armed groups in southern Syria. Recall that at present the radicals control a large part of the province of Quneitra, including the administrative center.

Ctrl Enter
Noticed oshЫbku Highlight text and press. Ctrl + Enter
We are
The United States is victorious on the west bank of the Euphrates. Trap for the Syrian army
Military Reviewin Yandex News
Military Reviewin Google News
13 comments
Information
Dear reader, to leave comments on the publication, you must sign in.