Deceived and slandered defenders of the Winter (part of 1)

April 9 2018
10
Attempts to historically accurately restore the October storming of the Winter Palace were made in the Soviet era. Usually the work was intensified on the eve of the next anniversary or by the memorable dates. For example, in summer 1967 of the year in preparation for the celebration of the 50 anniversary of the October Revolution, the all-powerful “gray cardinal” in the party leadership M. Suslov sent a written order to the Hermitage about the restoration of authentic events, names and facts related to the capture of the Winter Palace. As part of this assignment, it was established that the storming of the palace was virtually non-existent and there was no accurate data on the number of the dead. Attempts to collect written evidence of those events from direct participants and eyewitnesses showed that many of the memories of real events in the memory of these veterans were mixed with what they saw on the screen or read in books. In other words, these memories were not always reliable.
Along the way, attempts were made by historians from the Hermitage to find out the role of female shock women battalion in those distant events. However, these facts have not been sufficiently studied and documented. It is understandable. Then other priorities and assessments were important historical events. 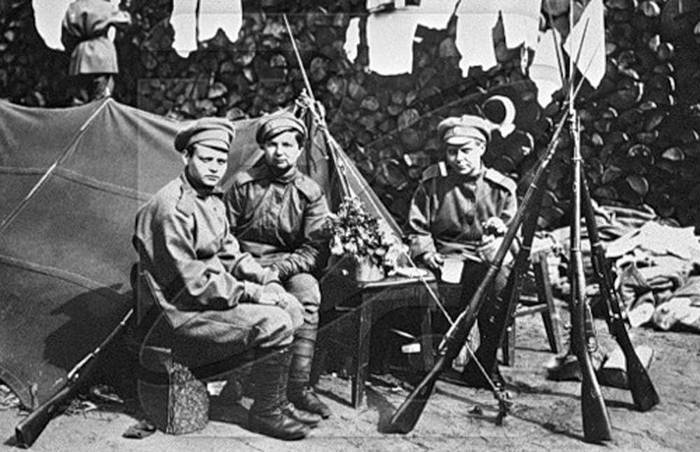 Was the revolution poet right?

In Soviet times, the compulsory school curriculum in literature included the study of the poem by V. Mayakovsky "Good!". It was written for the 10 anniversary of the October 1917 events of the year. In it, the poet of the revolution mentions among the defenders of the Provisional Government the “Bochkarevsky fools” and, in a poetic rhyme, describes how the “battalion of women” seized by fear was the first to leave its position in the Winter Palace. Many still retain such an idea of ​​those distant events. But was it really the case, or did Mayakovsky deliberately distort the truth for propaganda purposes or to please the authorities?

Could it happen that the proletarian poet, being a contemporary and a witness of those October events, was mistaken in calling the defenders of the Winter Palace "Bochkarevskys"? Yes and no. The defense of the palace, along with other subdivisions that remained loyal to the Provisional Government, was held by the 2 Company of the First Petrograd Women's Battalion (hereinafter referred to as the FSP). However, the majority of its personnel originally signed up at the call of Bochkareva to its female formation. Later, according to the memoirs of Maria Leontievna herself, set out in the book “Yashka”, as a result of a split among volunteers, about three-quarters of the women left Bochkareva. The reason was the fact that it “beats the muzzle like a real vakhmistr of the old regime” and opposes the creation of a soldier’s committee. Some of these volunteers completely disappeared into the chaos of those days. About 500 people formed the basis of the future women's battalion in Petrograd. So, Mayakovsky was partly right when he called her “Bochkarevskie” female players at the Palace Square.

At the same time, it is precisely known that neither Maria Bochkareva personally, nor volunteers from the female death team subordinated to her in the October events in Petrograd took part. The survivors of the "bomber" after their first and, at the same time, the last battle with the Germans in early July and until their disbandment were in the rear of the Western Front. Despite the allegations of Bochkareva herself that she had “held her sector of the front” until the last day, no evidence of this was found. Moreover, 14 August 1917, the newly appointed Supreme Commander, General L. Kornilov, issued an order prohibiting the participation of female volunteers directly in hostilities.

Women's battalion in due form

The First Petrograd Women's Battalion was one of two women's volunteer formations created in full compliance with the requirements of a separate provision “On the formation of military units from female volunteers”. The document was approved by the Military Council 29 June 1917 of the year. The second was the Moscow Women's Death Battalion. Later it was allowed to form the Kuban women's shock battalion. In addition, it was allowed to create 11 women's communications teams in four major cities of Russia. In the suburbs of the capital, there was also a women's maritime team among the 35 volunteers. Sailors did not have time to prove themselves and later dissolved themselves.

The women's volunteer formations created after 29 June were legally part of the Russian army, were on all types of allowances and underwent longer training in infantry training programs, taking into account the military practice of those years. The battalions had a full-fledged staff structure and were staffed according to wartime norms.

According to the historian A.Senin, the approved staffing level of the LWTP was 24 officer and military officer, 1168 soldiers, of whom 85 was not combatant. However, as the commander of the 3-s company and the assistant commander of the women's battalion, Captain P. Chagall, later recalled, in fact, the PJRB had 4 companies each for 280. There was a household unit, a wagon train and a non-combatant company, a total of 100 people, and also a battalion headquarters according to the state. In doing so, the volunteers were 1000 people, 12 officers and 3 non-commissioned officers. The battalion had several teams: machine-gun, communications, engineer, horse and foot reconnaissance, the total number of 170 people. All officers, except the battalion commander, had combat experience and awards received in battles in the war with the Germans. The battalion of the Life Guards of the Kexholm Regiment was commanded by Captain A. Loskov. Since the PFBL was a separate military unit, he was granted the rights of an infantry regiment.

The women's battalion was housed in the territory of the Engineer (Mikhailovsky) Castle in the same palace complex together with the Nikolaev Engineering College. There were all the necessary conditions for the organization of the primary military training of women volunteers. On this basis, not only the formation of PFB was carried out. For the first time in the world in the period from 1 to 4 on August 1917, the Women's Military Congress was held in the St. George Hall of the Engineer's Castle. The volunteers of the battalion stood in the guard of honor at the meeting of the congress delegates. And on the opening day of the August 1 congress, a military parade was held by the forces of the women's battalion personnel. Upon completion of all activities of the Women's Military Congress, the PFWL departed to continue combat training in a summer camp near the Levashovo railway station of the Finland Railway.

Hard to learn - easier to fight

Arriving at the place of deployment, we immediately set up the tents and set up field service. This empty suburban suburb in 25 versts from the capital was well suited for military training in the field and shooting. A few days later they requisitioned several dachas for the needs of the battalion. Within one cottage there was one company. A separate large summer cottage was allocated for the headquarters, the officers' meeting and the office. The officer’s canteen was also located there.

Started daily combat and drill. As the commander of the 3 Company recalled, volunteers received training in the course of training teams, including day and night transitions, as well as maneuvers as part of their units. At times, officers and instructors experienced some difficulties in the training process, since they had to teach volunteers the basics of military affairs, adapting the statutory requirements and army living conditions in the battalion to the psycho-physiological characteristics of its personnel.

The battalion, located in isolation and far from the revolutionary events, was persistently and conscientiously preparing for the upcoming battles with the enemy at the front. “In the most categorical form, I declare,” Captain Chagall wrote later, “that the battalion didn’t have any political coloring, just as there wasn’t any talk about the future political structure of Russia. The battalion was a union of the best, honest Russian girls and women who wanted to serve, even immeasurably more - to sacrifice themselves to their homeland. "

Almost two months of daily classes gave their results. The women's battalion, in general, was ready to be sent to the army in the field. The officers prepared a sketch of the PFB banner, which was sent for approval to the Ministry of War. The banner looked solemn: the image of the Mother of God with lilies around and the motto “For Faith and Homeland” was placed on a blue crack. On the other side of the banner was an eight-pointed cross and the inscription “1-th Petrograd Women's Battalion”. But it so happened that further events developed so rapidly, therefore, they simply did not have time to approve the project and make the banner.

Combat training was nearing completion. In the battalion, everyone expected the arrival of the Minister of War scheduled for October to check the readiness for dispatch to the front. With the successful outcome of this preliminary review, it was intended to take the military oath and conduct a parade with the participation of the ministers of the Provisional Government.

However, instead of the war minister, General A. Verkhovsky, with the inspection, the battalion was visited by Captain A. Kuzmin, the confidant of Kerensky himself. In addition, he served as assistant to the commander of the Petrograd Military District on propaganda among the soldiers. In connection with the frequent changes in the leadership of the capital's military district, he often had to temporarily perform the functions of the military leader of the district. Perhaps this is why Captain Chagall mistakenly mentions him as Minister of War.

The review of the women's battalion passed without comment, for which the officers were thanked. Intense almost three-month military training was successfully completed. Volunteers were preparing to be sent to the Romanian front, scheduled for October 25. However, the officers of the battalion understood that volunteers were no good for heavy positional warfare. But they could carry a security service or be used to perform certain tasks provided for the shock parts. “We all thought about this,” recalled P. Chagall, “and they knew that, in other words, they had to commit suicide.”

Unexpectedly, the headquarters of the metropolitan military district received an order for the urgent arrival of the October 24 battalion in Petrograd at Palace Square for conducting combat drill before sending the PZHB to the front line and for participating in the military parade of the capital's garrison troops. All volunteers were given cartridges with live ammunition. As explained to them, this is done in case of suppression of possible unrest during the parade of troops. However, none of the drummers could even imagine what violent revolutionary events and severe trials await them in the coming days in the capital. With a light soul and cheerful mood, they plunged into the cars and the train set off into the unknown. Many of them had to lay their heads, becoming involuntary participants in the birth of a new Russian HISTORY.