Tsushima is born in the minds

April 7 2018
198
The methodological psychological treatment of the Russian population through the retransmission of terry anti-Russian propaganda continues non-stop and on a scale that threatens state security. 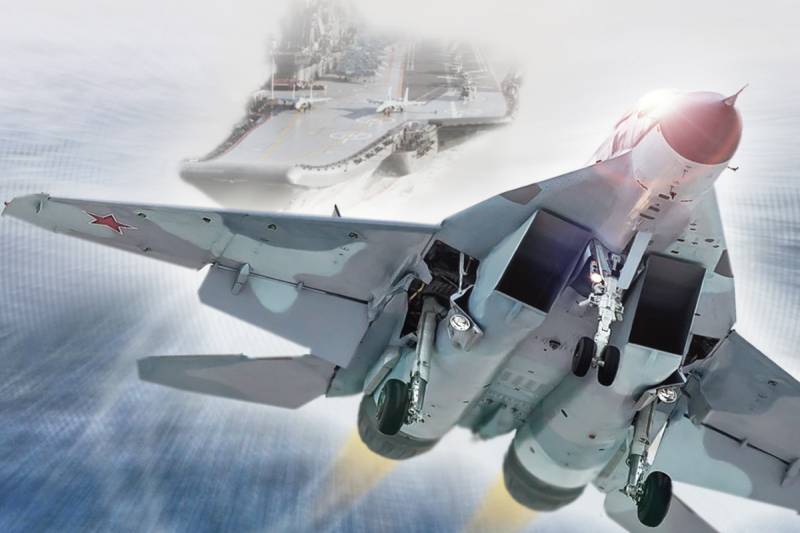 The next American “sensation” from the series “Russia is a complete crap!” Was published on the Russian-language Internet Smelling so bad that you want to hold your nose and immediately retire to a safe distance for your sense of smell. But where do you command me to flee if the publication, which is occupied with the distribution of such fakes in the Russian Federation, is “the most cited source in Russian-language blogs?” News”, And the number of citizens fed this way monthly reaches 20 million people? That is, nowhere to run. They’ll get it everywhere. And they are guaranteed to cover a gullible population with a concentrated information fire. 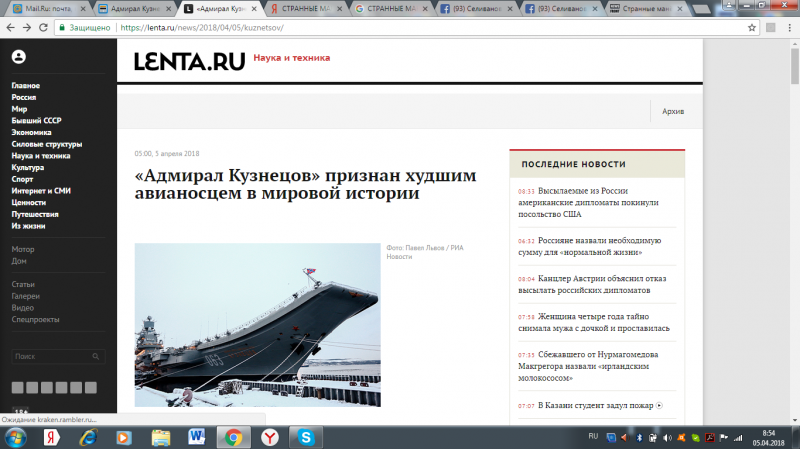 And now a brief instruction on how this is done, on a quite typical example of the aforementioned “sensation”. Let's start with the title: "Admiral Kuznetsov" is recognized as the worst aircraft carrier in the world stories". Written in such a way as to immediately inspire the reader: the verdict is final and not appealable.

But let the question! And who, strictly speaking, was honored to pass such sentences? Perhaps, this command of the Russian Navy, having conducted a colossal research work, came to such a bleak conclusion? Or, at worst, the US Department of Defense analyzed a bunch of intelligence and published its findings?

Nothing like! A certain American publication with a name that leaves no doubt who it serves (The National Interest), has decided to place Admiral Kuznetsov in the top five of the worst aircraft carriers in world history. Mockingly putting it on par with the first in the world aircraft carriers of the USA, France and Japan built in the twenties and thirties of the last century. With a clear hint that the Russians in the 21 century "float" on an equally antediluvian vessel.

But, maybe, in the publication, which is characterized as “an authoritative military-political magazine”, write so competent authors who have the moral right to render such verdicts?

We look. The author of the work is a certain Robert Farley. Even a slight touch of his biography leaves no doubt: he is a completely civilian from the university teaching environment, not directly related not only to Russian, but even to American the fleet, and indeed to military service.

And such a completely home-grown “expert” based on the gossip about the Russian aircraft carrier gathered on the Internet, such as the fact that it smokes the thick of everything in the world, makes a “fundamental conclusion” about its complete unsuitability for military service.

And it would be fine if this writings remained only home reading for the local (American) audience. Let them continue to drool from tenderness at the sight of such pictures that are spiritually lifting for them.

But after all, this game is instantly relayed by the largest Internet news publications on the territory of Russia and at the same time is served in the form of an indisputable fact established by supposedly world experts! And this is despite the fact that among 20 millions of monthly readers of only one of these repeaters, there are hardly a few thousand who are seriously aware of naval problems and are able to separate cutlets from flies. The main mass, especially the target audience - the youth, will surely swallow this bait, even without delving into how rotten the worm is hanging there.

Alas, this is how the human psyche is arranged, to influence which such demotivators are well trained. And then we will wonder how our people have such a persistent distrust of the capabilities of their own country? Why even the state document of the highest level of responsibility, the message of the president of the country, is perceived by many as a set of cartoons, for which there is absolutely nothing?

Yes, all because the same! The audience, which from morning to evening is fed by such foul-smelling "sensations", even with good intentions, cannot perceive reality differently than through the curved mirror of this omnipresent foreign agitprop promptly translated into Russian.

However, what else to expect from such translators, the fatal lack of literacy of which simply does not allow them to treat such writers with the necessary criticality, such as Farley mentioned. And this is not an empty slander on my part. These repeaters are not something that are not experts in the field, which are taken to convey to the Russian audience, they do not even know the English language! You can see for yourself by comparing the fragment. Original with his mechanical translation in Russian:

"Assigned to the Northern Fleet, she has been periodically deployed to the Mediterranean, usually with great fanfare."

"After that," Admiral Kuznetsov, "notes The National Interest," periodically traveled to the Mediterranean Sea, as a rule, with great fanfare. "

Any person who has at least a distant relationship to the fleet will surely die of laughter from the translation of the quite competent "deployed to the Mediterranean" (deployed in the Mediterranean) with the phrase about a ship that goes there like a bus with tourists. This is quite a baseboard level of general “literacy” of those who daily bombard a multi-million Russian audience with fakes like the above.

And now, briefly, on the merits. How "bad" aircraft carrier "Admiral Kuznetsov", can be judged by the following well-known facts. A ship of a similar project, Varyag, was acquired by China in an unfinished form in Ukraine after 20 years after construction began, completed in Dalian, the Chinese city, renamed Liaoning and is currently the flagship of the PLA Navy.

But what's more, the Chinese build the second aircraft carrier, already fully built, as an almost exact copy of the same “Varyag” - the brother of “Admiral Kuznetsov”! It is unlikely that the most economically successful power of the modern world, which registers today the largest number of patents in the world, would arrange for itself an eternal headache in the form of “old and worthless Russian aircraft carriers”. 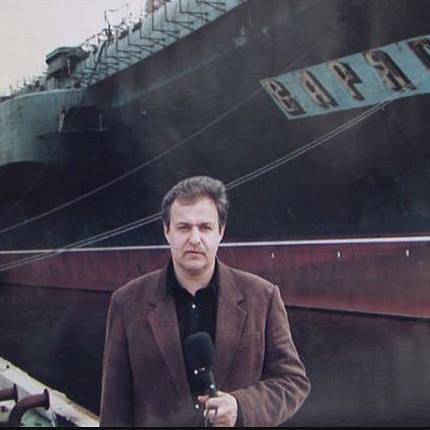 The author of the article on the Russian “Varyag” leads to China. 2000 year

The Indian case is even more interesting. As is well known, the Hindus, with great desire and overpaying an extra billion dollars against the original price, bought out even more old-fashioned, than the Admiral Kuznetsov, aircraft carrier Admiral Gorshkov. And again, they proudly made it the flagship of their fleet!

But this is not the most interesting. Around the same time, the Americans were offering India for free (!) To get from them, although not a new, but classic, which incorporates all the experience of American shipbuilding and the fully combat-ready aircraft carrier Kitty Hawk. Provided that India will buy, already for money, deck Aviation for this monster. The Hindus figured, counted and ... chose a Russian aircraft cruiser.

This is, in fact, all that you need to know about the "most backward and worthless" Russian aircraft carrier Admiral Kuznetsov. Which, like any other large ship, of course, has problems. But they are not connected with the imaginary imperfection of its design, which supposedly makes it “the worst aircraft carrier in world history”, but with historical and political circumstances, to which the ship itself has no relation.

And in its class of combat units, heavy aircraft-carrying cruisers, subject to proper maintenance and operational load, it fully complies with all tactical and technical requirements imposed on such ships. That is why, by the way, it is now heavily repaired, and not dismantled for scrap.

But all these very unimportant “details” that make up the essence of the matter are unlikely to ever become the property of the multi-million audience of the above-mentioned factory of mechanical translation into Russian of dense American fakes. Just because such “factories” exist for solving specific tasks that have nothing to do with the education and objective information of the Russian population.

Ctrl Enter
Noticed oshЫbku Highlight text and press. Ctrl + Enter
We are
The tragedy of the American army ("The Atlantic", USA)Situational analysis of the death of the MH17 flight (Malaysian Boeing 777), made on the basis of engineering analysis from 15.08.2014
Military Reviewin Yandex News
Military Reviewin Google News
198 comments
Ad