Latvian arrows. The triumph and tragedy of the praetorians of Lenin

April 9 2018
63
Latvian riflemen were destined to play a landmark role in the revolution and the Civil War in Russia. They actually turned into the "praetorian guard" of the Bolsheviks, whom Lenin and his closest associates trusted unconditionally. Iron discipline, dedication and dedication distinguished the units of Latvian riflemen in a favorable direction from many other units of the Red Army during the Civil War. National mentality or political expediency? What made the Latvians from rifle regiments, formed back in tsarist Russia, to faithfully serve the Bolsheviks?


Up until the beginning of World War I, the Latvians served in the Russian imperial army on a general basis. The Baltic States were a rather politically unreliable region; therefore, the tsarist government was not initially set up to create national armed formations staffed by representatives of the Baltic peoples. The situation changed with the beginning of the war. And the most important role was played not so much by lobbying the idea of ​​the Latvian formations by the Latvians - deputies of the State Duma of the Russian Empire, as by the active offensive of the German troops on Livonia and Kurland.

July 27 The 1914 of the year in Wolmar, Vendensky and Valka counties began activities to call for reservists who served in 1909-1913, and already on July 30 general mobilization began. Most of the Latvians were sent to the twentieth army corps in East Prussia, in the garrison of the Ust-Dvina fortress. In East Prussia, there were about 20-25 thousands of Latvian conscripts. At the same time, in Ust-Dvinsk fortress, the formation of voluntary armed squads from among ethnic Latvians began. When 1 April 1915, the German troops entered the territory of Courland, capturing one settlement after another, the tsarist government realized that a little more and the Germans would capture Riga. To remedy the situation, the commander of the North-Western Front, General of Infantry, Mikhail Vasilyevich Alekseev, August 1 (July 19), 1915, signed a decree on the creation of Latvian rifle battalions. Latvians - State Duma deputies Janis Goldmanis and Janis Zalitis made a call for fellow tribesmen to come into service under Latvian flags.

Initially, it was decided to form the 8 Latvian rifle battalions, partially staffing them with volunteers from the Ust-Dvinsk fortress. Already 12 August began the formation of the first battalions. Latvian riflemen from the 1 Ust-Dvinsk Latvian Infantry Battalion went to the October 23 front. Already on October 25, battles took place in the area of ​​the Tyrele marshes, and on October X, the Latvians in the area of ​​Plakantsiems drove the German troops back. On October 29, the 26 th Battalion of Riga was transferred to the front, which five days later successfully repelled the offensive of the German units. On November 2, the 5 th Kurzeme battalion was also sent to the front.

The total number of Latvian rifle battalions by the summer of 1916 was already 11,5 thousand people, among which the majority (10 278 people) were Latvians, and among the remaining 402 people were Estonians, 192 people were Russians, 174 people were Lithuanians, 128 people were Polish and 25 people - Baltic Germans. November 4 The Latvian battalions were converted into Latvian rifle regiments that were part of two Latvian brigades.

The commander of the 1 Latvian Infantry Brigade was appointed Major General August Ernest Misiиньš, a member of the Russo-Japanese War, who commanded the 1912 Siberian Infantry Regiment from 12 and then a brigade of the 79 Infantry Division. The higher command considered that the Latvian Major General Missins, who had already commanded the brigade, would be an ideal candidate for the role of the commander of the Latvian riflemen. 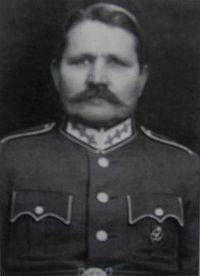 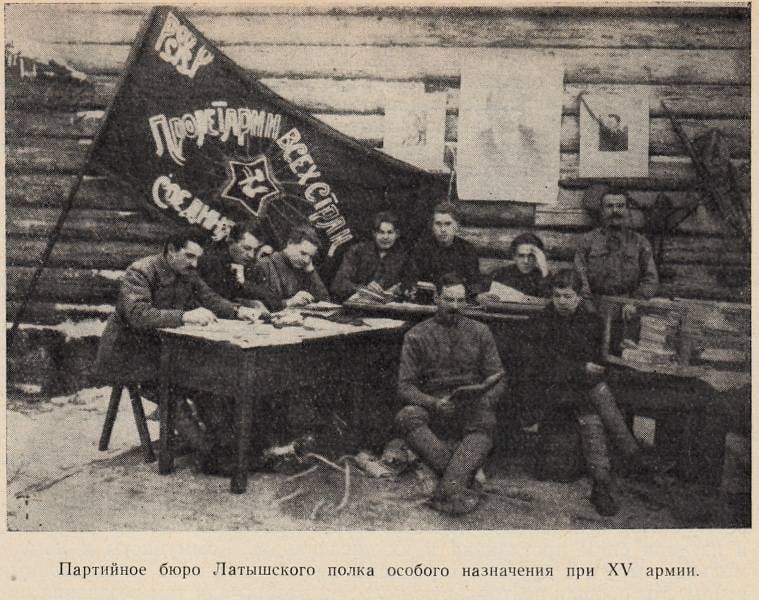 From 27 to 29 in March (9 - 11 in April) 1917 was held in Riga at a congress at which Iskolastrel was established - the Executive Committee of the Joint Council of Latvian Rifle Regiments. By May 1917 in Iskolastrele the Bolshevik position finally prevailed, after which the Latvian arrows turned into one of the main strongholds of the Bolshevik agitation in the ranks of the Russian army. After the surrender of Riga, the Latvian arrows retreated under Petrograd. A member of the RSDLP (b) and a native of Latvia, Semyon Nakhimson, who served as a junior doctor in an ambulance car with the rank of “ordinary doctor”, was elected political commissar of the Latvian rifle regiments. October 26 The 1917 Army Military Revolutionary Committee took the power in the front line, where the Latvian rifle units were stationed, into their own hands. November 12 The 22 th Tukkum regiment was deployed to Petrograd to defend the Bolshevik government. A joint company of Latvian riflemen began the service for the protection of the Council of People's Commissars in Smolny. It was the Latvian riflemen who provided protection for the relocation of Soviet organs from Petrograd to Moscow.

13 April 1918 was formed by the Latvian Soviet Infantry Division. The division commander was appointed 44-year-old Joakim Ioakimovich Vatsetis - the son of a Latvian farm laborer, who had managed to make an impressive military career for a man of such origin in the Russian Empire. 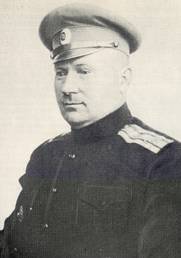 Having started his service in the 1891 year as a volunteer in the Riga training non-commissioned officer battalion, in 1897, Mr .. Vatsetis graduated from the Vilna Junior Infantry Cadet School, and in 1909 he studied at the Academy of the General Staff. Joachim Vatsetis commanded a company, an educational team, and in 1912, with the rank of lieutenant colonel, he became the commander of the battalion of the 102 infantry regiment of Vyatka. Since the beginning of World War I, Vatsetis participated in battles in Poland, was seriously wounded, and after treatment in the fall of 1915, he was appointed commander of the 5 Zemgale rifle regiment with the rank of colonel. Shortly before the revolutionary events, documents were sent to the Supreme Headquarters to assign Colonel Joachim Vatsetis the rank of major general, but the subsequent political perturbations did not allow the commander of the Zemgale rifle regiment to get general shoulder straps. Vatsetis took over the general position already in the Red Army, becoming the commander of the Latvian infantry Soviet division.

The 9 th Latvian rifle regiment was created to carry out the commandant's service for the protection of the Kremlin, and was involved in the operations of the KGB in the fight against the counter-revolutionary underground and criminals. The Latvian arrows under the command of Vatsetis played a key role in suppressing the Left Socialist-Revolutionary insurrection, participated in hostilities against the White Guards in various regions of Russia.

The effectiveness of the Latvian riflemen and their unconditional devotion to the Soviet power contributed to the further strengthening of trust and sympathy for them from the Bolshevik leadership. Joachim Vatsetis in July 1918 was promoted to commander of the Eastern Front of the Red Army. Latvian arrows fought with Kappel, Denikin, Wrangel. By March, the 1920 was part of the Latvian Soviet rifle division and included 9 Latvian rifle regiments, totaling 17 thousands of soldiers and commanders. 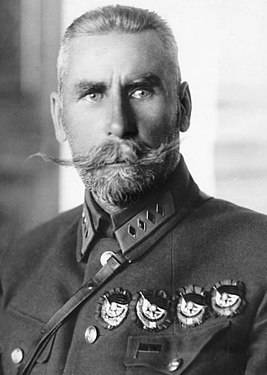 28 November 1920 was decided to disband the Red Banner Latvian Rifle Soviet Division. Most of the Latvian shooters who served in it, numbering about 12 thousands of people, returned to Latvia independent by that time from the Soviet power. However, the main part of the commanding staff of the division remained in Soviet Russia, where many Latvian riflemen made serious careers in military service and in state security agencies.

Joachim Vatsetis reached the rank of commander of 2 rank, although, as a former royal colonel, he was soon sent to teaching. One of the most famous commanders of the Civil War was the former senior non-commissioned officer of the 1 Latvian Infantry Regiment Jan Fabricius (pictured), who then commanded the 17 and 4 rifle corps of the Red Army and then served as assistant to the commander of the Caucasian Red Banner Army (KKA) ). The former warrant officer of the 4-th Vidzeme Latvian rifle regiment Edward Berzin (Berzins) worked with the OGPU from 1921, then headed Dalstroi. The divisional commander, Jan Alksnis, headed the department at the Academy of the General Staff of the Red Army. Gustav Bokis, who served in the 7 Latvian Infantry Regiment, rose to the rank of division commander and head of the Red Army Auto Armored Directorate.

The end of the era of the "Latvian riflemen" occurred simultaneously with a large-scale purge of the Soviet power structures from the "Leninist Guard". Already by the beginning of 1930's. immigrants from the Latvian rifle regiments began to gradually move to secondary positions in the army and the state apparatus. The vast majority of prominent Latvian shooters were repressed in 1937-1939. Stalin did not intend to take into account their revolutionary merits — new times were coming in which “Leninist Praetorians” were no longer needed. Someone, of course, was lucky, like, for example, Jan Kalnberzin, who from 1940 to 1959. he was first secretary of the Central Committee of the Communist Party of the Latvian SSR, and he lived to 1986, having died at a very old (92) age.

It should be noted that another part of the Latvian riflemen, who did not remain in Soviet Russia and returned to independent Latvia, later also made a military or political career in bourgeois Latvia. For example, Andrejs Auzans, who returned to 1923 in Latvia, continued to serve as chief of the military topographic department of the Latvian army in the rank of general, and in 1944 he moved to Germany, from where he moved to Great Britain in 1948, where he died in 1953 in the year . General Missins returned to Latvia and from 1919 he served as chief of the general staff of the Latvian army, and then as chief military inspector. Former deputy of the State Duma of the Russian Empire, Janis Goldmanis, to whom the initiative to create Latvian rifle formations belonged, returned to Latvia in the 1918 year and twice, in the 1920-1921 and in 1925-1926, headed the Military Ministry of the Republic of Latvia. Some Latvian riflemen, who returned to Latvia, fought against the Soviet Union during the Second World War as part of the Latvian collaborationist formations of the Third Reich.

In modern Latvia, whose politicians like to talk about the “Soviet occupation” of the republic, for some reason prefer not to remember that part of their national storieswhich is connected with the red Latvian arrows and their huge contribution to the defense of the October Revolution and the victory of the Red Army in the Civil War. Red Latvian arrows, Vatsetis and Fabricius, security officers and party leaders do not fit into the beautiful myth of "democratic European Latvia and the horrors of the Soviet occupation."

Ctrl Enter
Noticed oshЫbku Highlight text and press. Ctrl + Enter
We are
100 years of the Workers 'and Peasants' Red Army and NavyResults of the week. "They stood to death like buttons!"
Military Reviewin Yandex News
Military Reviewin Google News
63 comments
Information
Dear reader, to leave comments on the publication, you must sign in.