The British leadership appreciated the benefits of drawing the Scandinavian countries into the war: the export of Swedish iron ore to Germany was partially blocked, this was an important link in the economic blockade. The British could take over the huge Norwegian merchant fleet. It was also a way to pull the Germans from the western front, to force them to fight under British rule fleet. A new front in the north would force the Germans to disperse their forces and, possibly, prevent their advance in the west. Here the British were warmly supported by the French. Scandinavia was also a convenient base, in particular, for transferring hostilities to the Baltic. The Scandinavian bridgehead together with neighboring Finland could be used against the USSR.

In Germany, Norway was primarily interested in the naval command. The experience of the WWI showed that the German fleet, limited to the bases of the Helgoland Bay, cannot solve the tasks facing it, the main of which was the naval blockade of England. Military theorists Groos and Wegener wrote that the maritime situation in Germany could be improved by capturing the coast of Norway. Wegener also pointed out that the northern communications of Russia could be cut off from Norway.

From the Germans did not hide the British interest in Norway. General Falkenhorst identified the reasons for the German invasion as follows: 1) prevent possible British penetration into Norway; 2) the seizure of bases in Norway to ensure the freedom of action of the German fleet; 3) ensure unimpeded transport of Swedish ore along the coast of Norway.

In general - who seized domination in Scandinavia - he received significant advantages in the fight against the other side. The invader could expand the basing system of his fleet and air force, as well as use the economic resources of Scandinavia.

At the end of 1939, a special headquarters was set up in Germany to develop a plan of operation against Norway. Part of the German command doubted the need for an operation. Brauchitsch and Halder proposed to postpone the seizure of Norway in order not to divert forces from the upcoming offensive against France, scheduled for May 1940. However, Hitler insisted on the seizure of Norway and Denmark. 1 March 1940. Hitler signed a directive to conduct the operation, code-named "Weserubing". Since the second half of March, concrete preparations began for its implementation.

Considerable importance was attached to the "fifth column". The leader of the Norwegian fascists V. Quisling traveled to Germany, met with her leadership, discussing the invasion of his country. In Norway, even questions to Quisling did not arise. 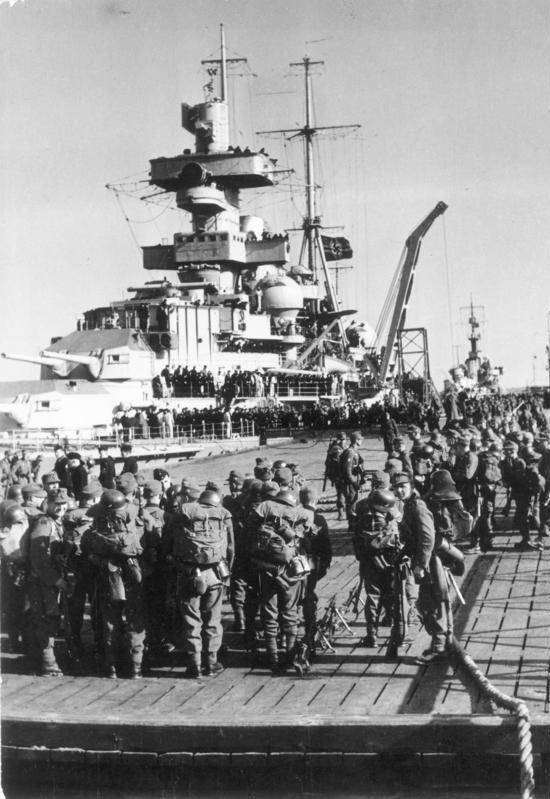 The German command tried to keep the preparation for the operation secret. However, German activity did not go unnoticed. In London, Oslo and Copenhagen, there were reports that ships and troops were concentrated in German ports, and they were being loaded on board. From various sources, there were also direct reports that the German invasion was ahead.

Quotes from W. Shearer *: "two Scandinavian countries and ... the British were caught off guard, not because they were not warned of impending danger, but because they did not want to believe in the reality of such a danger." “The Norwegian Cabinet reacted skeptically to such signals ... the Norwegian government did not find it necessary to carry out such basic activities as mobilizing the army, re-staffing the forts guarding the entrances to the most important harbors, blocking the runways on the airfields and, most important, mining the narrow straits on the outskirts of the capital and major cities. If it carried out these activities, история could have taken a completely different path. ”

The Danes also noticed that German military columns, stretching for tens of kilometers, march to their border. The Danish government has not responded.

Meanwhile, the British were preparing their operation in Norway. The plan “R4” was developed, which provided for the mining of the Norwegian territorial waters near Narvik - in order to impede the transportation of ore to Germany. This was supposed to provoke a German response. As soon as the Germans start them (or the British will assign them the intention to do it), then the British would start the second part of the plan: the landing of their troops in Norway. The British planned to mine the Norwegian waters on April 6, but because of the bad weather they underwent an operation on the 8. As a result, the Germans managed to get ahead of the British.

The first German ships with the landing force left Wilhelmshaven on the morning of April 7. They had to go 2 000 km to Narvik, by which they had to go to the morning of 9. The battleships Scharnhorst and Gneisenau and 10 destroyers were supposed to deliver 2000 paratroopers to Narvik; the heavy cruiser Hipper and 4 destroyer were carrying 1700 paratroopers to Trondheim. Before Trondheim, all ships had to go together.

A German squadron heading north was spotted at 09.50 by a British air reconnaissance aircraft. However, the air reconnaissance message was inaccurate: the strength of the German compound was determined by one cruiser and six destroyers (in fact: 2 LC, 1 CT and 14 EM). English bombers sent to the attack found the Germans in 13.30 further north. Bombers attacked completely unsuccessfully, but the composition of the German squadron was determined closer to reality. Because of the strict radio silence, the crews of the bombers reported this only in 17: 30. In 18.27, the English fleet in Scapa Flow was ordered to breed.

As a result, the English fleet reached the interception of the Germans only in 20.15 - 10 hours after the detection of the German squadron by air reconnaissance. If, of course, the Aglitsky fleet was not prevented from exiting earlier than in 20.15, some other completely insurmountable reasons, and not confusion in the air reconnaissance messages.

In the morning of 9, German troops occupied Denmark without a fight. Well, as without a fight - a couple of shootouts with a dozen dead on both sides was still. Denmark later became a springboard for action in Norway. 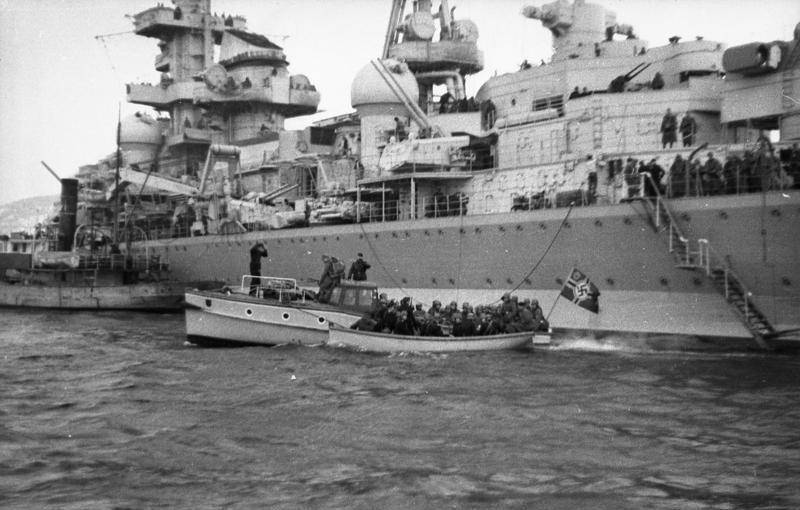 Unloading troops from the cruiser.

The Norwegian army in peacetime numbered 15 500 people, in wartime, the army should have increased fivefold. The offices of six of its divisions were deployed: 1-division - Halden (east of Oslo), 2-division - Oslo, 3-division - Kristiansand, 4-division - Bergen, 5-division - Trondheim, 6 - division - Harstad (near Narvik).

The German plan called for the capture of as many Norwegian centers as possible by a simultaneous surprise attack. If Oslo, Kristiansand, Bergen, Trondheim and Narvik were able to take, this would mean that five of the six Norwegian divisions would be immediately defeated or would have suffered heavy losses.

Taken aback the Norwegian armed forces offered only episodic resistance. The biggest success of the Norwegians was the sinking of the German heavy cruiser in the Oslo Fiord. However, the Norwegian capital was still captured on April 9. German paratroopers seized an airfield near Oslo, on which transport aircraft began to land. Having collected up to two battalions, the Germans moved to Oslo. Norwegians didn’t try to fight for the capital, their quickness was enough only to get the king and the prince, ministers and, of course, gold reserves out of the capital. At the disposal of the Germans got a large port of Oslo, through which began to arrive new parts and supplies.

April 9 German units captured Oslo, Arendal, Kristiansand, Stavanger, Egersund, Bergen, Trondheim and Narvik. Most of the country's population lived in and near these cities. In the hands of the Germans were the main Norwegian warehouses. weapons. The German forces during this period were only small detachments without artillery and armored vehicles. But the Norwegians did not even try to counterattack anywhere.

The British entered the battle, they drowned the German light cruiser and 10 destroyers in Narvik in Bergen. German aviation damaged several British cruisers, having discouraged the British from the desire to operate in southern Norway - within the radius of German aircraft.

Next, the deployment race began. The initial German landing was small (8 850 people), since the units were transported on warships. Then came the transport ships that were supposed to deliver the main force. In total, the Germans assigned 7 divisions to Norway. 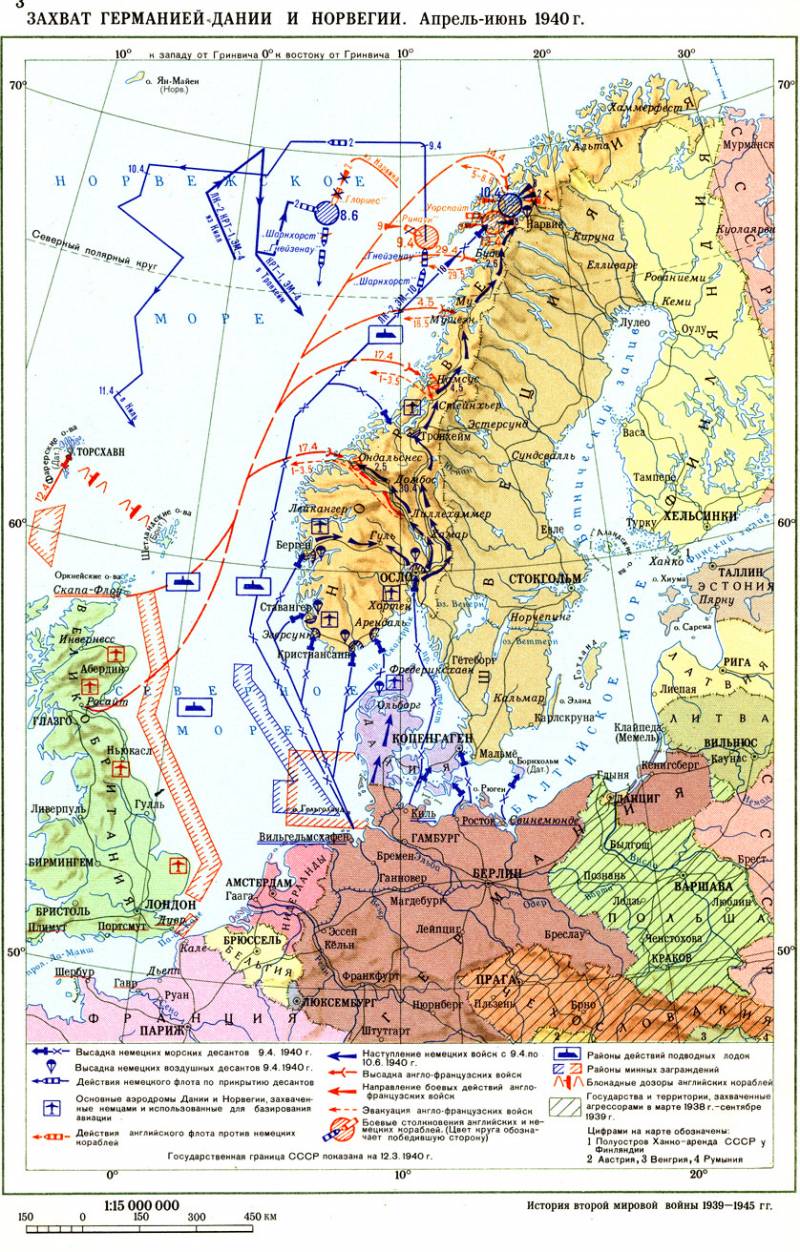 The transfer of German troops and supplies went through the strait between Denmark and Norway. British submarines sank three of the first-tier 15 vessels. The 2 echelon (11 ships) lost two ships that killed more than 1000 people (missing). After that, German troops were transported not by slow large transports, but by high-speed small vessels. Total Germans attracted to 400 ships. The number of soldiers transported began to reach 3000 per day. Also played a role of German transport aircraft.

The anti-submarine measures of the Germans greatly hindered the actions of the British submarines. The British sent high-speed ships to the strait. But their raids did not result. Since German aircraft dominated the strait, destroyers of the Allies could operate there only at night — and they spent most of that night on going to the strait and back. The British could not cut the German maritime communications.

Since April 12, Anglo-French units began to land in Norway. A total of four English, French and Polish brigades were sent there. The Allies were not going to throw significant forces into battle for the sake of Norway. Any hopes for the success of the Allies would be if they acted quickly. But while they understood the situation, they set goals, figured out relations with the Norwegians, gave orders, counter orders, the Germans managed to strengthen. 23, April, the English brigade collided with the Germans marching south from Oslo. Unable to withstand the German attacks, the British fled.

The Germans quickly expanded their main bridgehead in the Oslo region. Most of the Norwegian military commanders showed indecision or just stupidity. Part went to direct aiding the invaders; many considered the fight against the Germans hopeless and surrendered on the first demand. The 2-I Norwegian division, whose command was notable for its particular indiscriminateness, was quickly destroyed, more precisely scattered. Then the Germans dispersed the 1 division; 2000 people from her ran to Sweden.

There were several commanders of a different persuasion: Major Holtermann, Lieutenant Hannevig organized centers of stubborn resistance. They showed that not all Norwegians are afraid to fight. 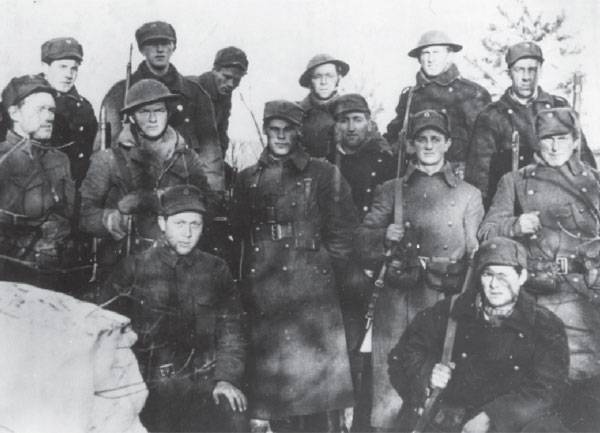 Norwegian soldiers from the unit Holterman.

By early May, the Germans occupied the south and center of Norway, the struggle continued only in northern Norway from Narvik. 8 June, British troops left Norway, finally destroying the port of Narvik. A few days later, the remnants of the Norwegian army capitulated.

In the Norwegian operation, the Germans suffered small casualties. But the losses of the fleet were heavy; The 3 cruisers and 10 destroyers were sunk, the cruiser and the 2 battleship, sustained heavy damage, stood up for a long overhaul. After the operation, Germany remained in the ranks of one heavy and two light cruisers, four destroyers. Two months later, the German staffs were faced with the task of working out Operation Zeelev, the landing in England. This operation had to be abandoned - and the small number of warships in the formation was one of the main reasons.

Having captured Denmark and Norway, the Germans gained an important foothold. From Norway during the Great Patriotic War, the Germans opposed the Allied deliveries to the USSR through the Norwegian Sea. 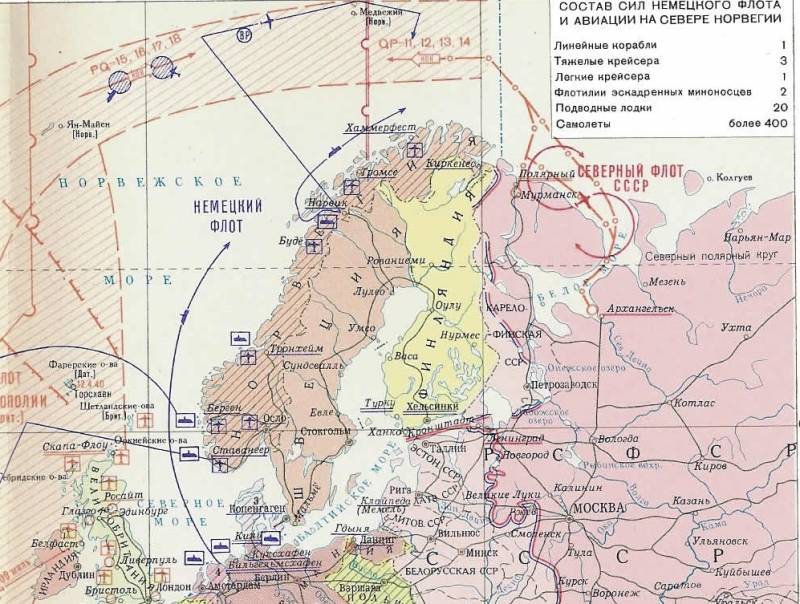 On the other hand, the seizure of Norway had already placed before the Germans the need to defend it against possible enemy landings. The task was not easy, because the length of the Norwegian coast is almost 20 thousand km (more than the coastline of Africa). As a result, the creation of a coastal defense in Norway diverted vast German resources.

* W. Shearer - a famous journalist, and then a historian from the United States.

Ctrl Enter
Noticed oshЫbku Highlight text and press. Ctrl + Enter
We are
Socialism on the bloodDiplomats of the People's Commissariat of Defense: on the eve and during the war
Military Reviewin Yandex News
Military Reviewin Google News
65 comments
Information
Dear reader, to leave comments on the publication, you must sign in.