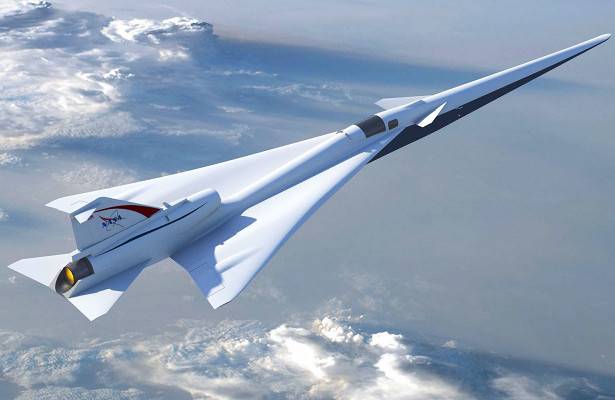 The test flight of the liner is scheduled for the end of 2021. The total amount of the transaction was $ 247,5 million. The development will be carried out by a division of the company called Skunk Works.

The project will be based on the noiseless sound barrier technology developed by NASA. “Most modern fighter planes can accelerate to supersonic speeds (over 1191,6 km / h), but after the flight there is a deafening boom caused by the so-called sonic boom. This is the reason for the current ban on the implementation of supersonic flights by civilian aircraft aviation", Explained in the company.

The construction of the new aircraft will be held in California. As planned by the customer, it will be an aircraft “capable of climbing 16,7 thousand meters and reaching speeds of 1512 km / h.”

It is noted that the sound impact is inevitable, but the designers intend to reduce this noise by more than half (75 decibels).

According to company spokesman Dave Richardson, a prototype is being created to collect data, "which will determine decisions made regarding the future of commercial supersonic flights."

Currently, there are only two supersonic passenger aircraft, mass-produced. These are the Soviet Tu-144 (exploited from 1975 to 1978 year), and the English-French "Concord" (made flights across the Atlantic from 1976 to 2003 year).

Ctrl Enter
Noticed oshЫbku Highlight text and press. Ctrl + Enter
We are
60 years ago made the first regular flight of the Soviet passenger liner Tu-104Lockheed Martin is preparing a revolution in energy. Russia does not believe in it
Military Reviewin Yandex News
Military Reviewin Google News
52 comments
Information
Dear reader, to leave comments on the publication, you must sign in.