US and Turkey: Redefining Priorities in Syria

April 5 2018
9
Over the past two years, the process of resolving the Syrian conflict has reached a substantially new level, characterized by the emergence of additional negotiation platforms for the warring parties, the main mediators of which were Russia, Iran and Turkey. In the course of the Astana meetings and the National Dialogue Congress in Sochi, positive results were achieved to a certain extent, which at the request of the mediating countries and on the relevant promise of the Special Representative of the UN Secretary General for Syria (hereinafter - CAP) Staffan de Mistura should be taken into account in the following negotiation process in Geneva. In addition, after the defeat of ISIL (a terrorist organization whose activities are prohibited in the Russian Federation) in the SAR, the next stage of resolving the Syrian problem is to adopt a new constitution corresponding to the current political realities and taking into account the interests of all categories of the population in Syria. However, the transition to a quick settlement of the Syrian crisis turned out to be a vague perspective that goes against the plans of certain forces involved in the conflict. 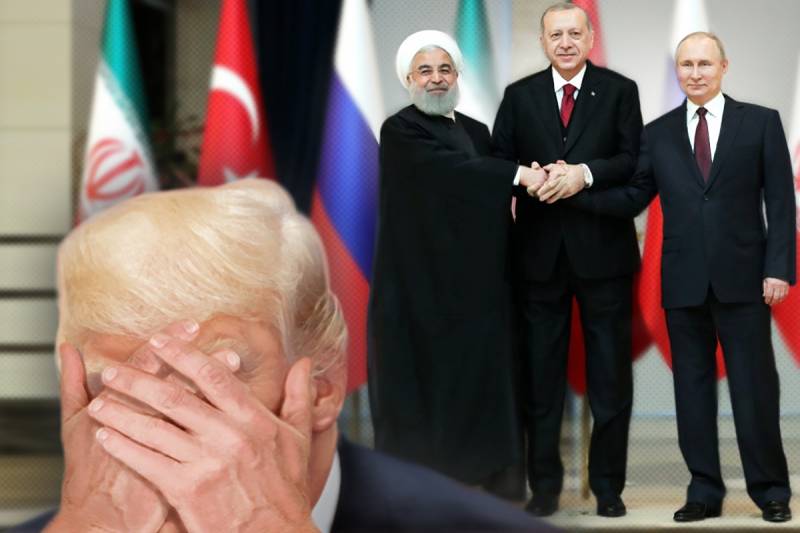 Turkey’s participation in all of the above negotiation formats in the role of mediator together with Russia and Iran has hit Turkey-US relations hard. The sharp revision by the Turkish leadership of their priorities in Syria became a serious reason for the divergence of views between Turkey and the United States on some issues that are sensitive to both countries. The main controversy was the support provided by the United States to Kurdish armed forces in the north of the SAR, entrenched along the entire Syrian-Turkish border. Ankara, in turn, has repeatedly expressed its concern over the Kurdish entities that, in its opinion, threaten Turkey’s national security. Nevertheless, the American side for a long time neglected the excitement of its ally and continued to arm and provide Kurdish self-defense units under the pretext of their fight against ISIL (a terrorist organization banned in the Russian Federation). This situation is fundamentally not satisfied with Turkey, given the long-standing struggle with the Kurdish armed groups, which are set up very negatively to the ruling regime in Turkey. Thus, at the end of 2016, the Armed Forces of the Republic of Turkey carried out a military operation called the Euphrates Shield, whose goal was to eliminate the Kurdish armed elements in the Syrian border cities of Azaz and El-Bab, to which the United States reacted negatively, urging the Turkish leadership to show restraint.

Improving relations between Ankara and Moscow, as well as the cooperation of both sides on the Syrian issue today, has become a real threat for the Donald Trump administration to let Turkey out of its orbit and lose an important strategic bridgehead in the Middle East. The leadership of Turkey made a serious breakthrough on the path to independence of foreign policy actions by purchasing Russian C-400 air defense systems against the backdrop of the adoption by the United States Congress of a new sanctions package against Russia. Also, Turkish President Recep Erdogan began to actively interact with another object of the US sanctions policy - Iran. Both states found a common denominator when discussing the subject of Kurdish separatism, especially after the independence referendum in Iraqi Kurdistan. The rapprochement between Tehran and Ankara, traditionally fighting for the redistribution of spheres of influence in the Middle East region, indicates the desire of the Turkish leadership to diversify the foreign policy vector of the country's development. It is also worth noting the regular meetings of representatives of Russia, Iran and Turkey in Astana to coordinate actions in the SAR, which can not but cause alarming signals from the Trump administration. 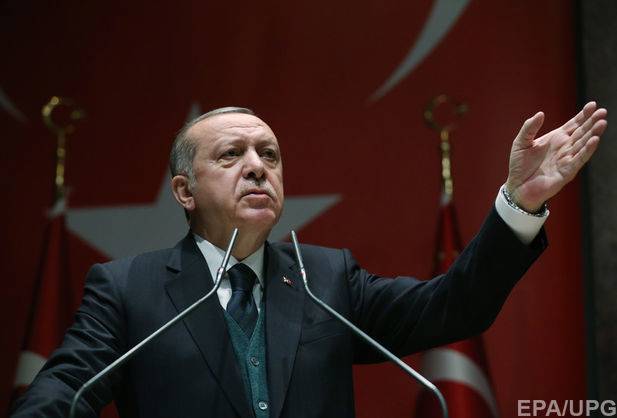 To date, the final military operation of the Turkish Armed Forces in Afrin against armed Kurdish formations, which are pro-American in their foreign policy orientation, once again underlines the tension in Turkish-American relations. Providing substantial support to the Kurdish self-defense detachments, which have been long-time opponents of Turkey for many years, the United States for some time has seriously exhausted the trust of its strategic ally in the region. And the determination of at least approximate dates for the end of such a confrontation in relations between the two states today is extremely difficult. This is facilitated by the negative rhetoric about the US policy in the region that has taken root in Turkish society, as well as the further plans of Recep Erdogan to continue the military operation in the north of Syria. The leadership of Turkey is seriously concerned about the presence and, moreover, securing of hostile Kurdish elements near their state borders. It is worth noting that the Turkish side accepts certain Kurdish organizations as such, recognizing them as terrorist, these include: the Kurdistan Workers Party (PKK), the Democratic Union Party (PDS), and its branch wing Kurdish Popular Self-Defense Forces (ONS) ). Recently, in his speech in Istanbul, the Turkish President announced that other operations were also coming soon, aimed at liberating the cities of Munbidge and Idlib from the above-mentioned Kurdish elements. Also in various Turkish media outlets are regularly noted the statements of the country's top officials regarding the postponement of subsequent military operations east of the Euphrates River. Such a state of affairs during the real and successful offensive of the Turks seriously threatens the existence of Rozhava (Democratic Federation of Northern Syria) as a whole. It is also important that in this Kurdish entity there is a large number of US military bases, which the American side does not intend to leave in the near future. In this regard, the further development of Turkish-American relations is experiencing severe difficulties in resolving such political contradictions. 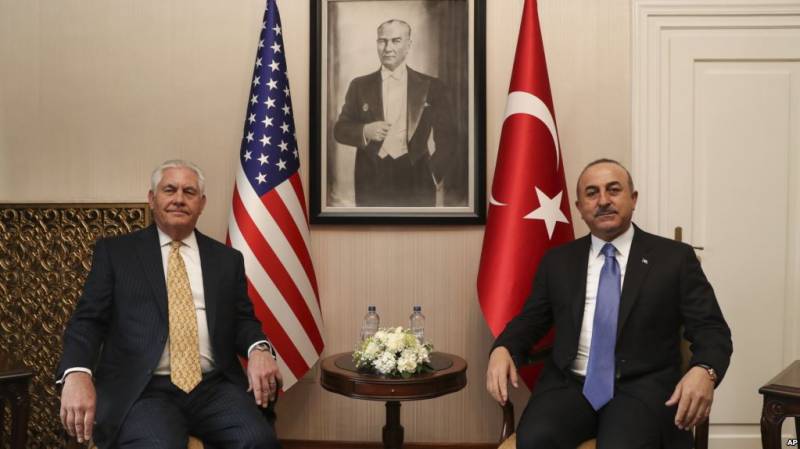 However, the parties are connected primarily by the NATO factor, which Turkey will not refuse. It is precisely military-strategic cooperation that plays the role of a stumbling block in this matter and gives tensions in relations between the two countries temporary. This is evidenced by telephone conversations that have become more frequent in recent days at the level of presidents of two states, during which their leaders stressed the need to strengthen bilateral relations between the US and Turkey as NATO allies and strategic partners. Also, the 8-9 March in Washington held Turkish-American discussions on the Kurdish parties and the general problems of Syria, which brings some clarity and coordination to the actions of the two allies in Syria. According to the statements of the Turkish representatives between the two sides, after negotiations with the former US Secretary of State Rex Tillerson, a certain consensus was reached and even tacit agreements were reached on the withdrawal of the previously mentioned Kurdish armed groups from Münbidj. The city is the last stronghold of the Kurdish forces on the west bank of the Euphrates and is considered a significant point for the Americans, expressing their strong concern in matters related to this entity. A spokesman for Turkish President Ibrahim Kalyn, commenting on Turkish-American relations, said the following: “Now Ankara expects that the agreements will be implemented. If they realize the promise, then Turkey and the United States will avoid a collision. The United States announced that the operation in Rakka was over. We expect terrorist elements to be withdrawn from the region. ” However, in recent times, at the joint press conference with Lesotho’s Foreign Minister Lessego Makgosti in Ankara, Turkish Foreign Minister Mevlüt авavuşoлуlu made another statement stating that Turkey will not limit itself to Münbij and the withdrawal of the PKK and PDS forces from it. The minister also noted that further military operations will cover other cities controlled directly by the Kurds.

At the present stage, it is important for the United States to accurately and correctly set its main priorities in the Middle East, as well as to pursue a very balanced policy with respect to regional forces. Building interaction with various parties to the conflict in Syria is a complex specificity of the existing relations between these parties. So, moving closer together with Kurdish groups that are in conflict with Turkey, the United States may push Turkey away from itself and subsequently burden itself with the Turkish-Iranian rapprochement in the region. If the United States ceases to support the Kurds, then with a similar scenario, other patrons in the face of Iran or the same Russian Federation may be found among the Kurds, which is absolutely unacceptable from the point of view of state policy. However, such a state of affairs would have a strong effect on Turkey and would strengthen the allied relations of Ankara and Washington. Turkey’s foreign policy priorities in the region are more understandable: any party supporting the Kurdish “terrorist” parties and their armed groups will be perceived by the Turks as an enemy.

Thus, the cooling of the Turkish-American relations at this stage is caused by existing differences between the leaders of these countries over the Kurdish issue in Syria, which, on the one hand, can be resolved in the near future by mutual concessions and pressure through NATO, and on the other - go into an even more difficult deadlock.