The most expensive helmets. Helmet Meskalamdug, the hero of the blessed country. Part four

April 13 2018
14
Who is he, this Meskalamdug? Translated from Sumerian, this is precisely the “Hero of the Blessed Country” (and this name is stamped inside on the surface of the helmet), and it is also known that he was one of the first kings (lugale) who ruled in the Sumerian city of Ur in XXVI century bc er They didn’t find much of it from the excavations, but it’s enough that the name of this ruler should be included in the world culture fund forever, namely, the golden helmet and the golden cylindrical seal, which says “Mescalamdo [r] - lugal”. More about him, as well as in the poem by S. Marshak “The Story of an Unknown Hero”, is not known. There are no other sources that mention his name. The British archaeologist Leonard Woolley, who was engaged in the excavations in Ur, generally believed that they were two different rulers who bore the same name. 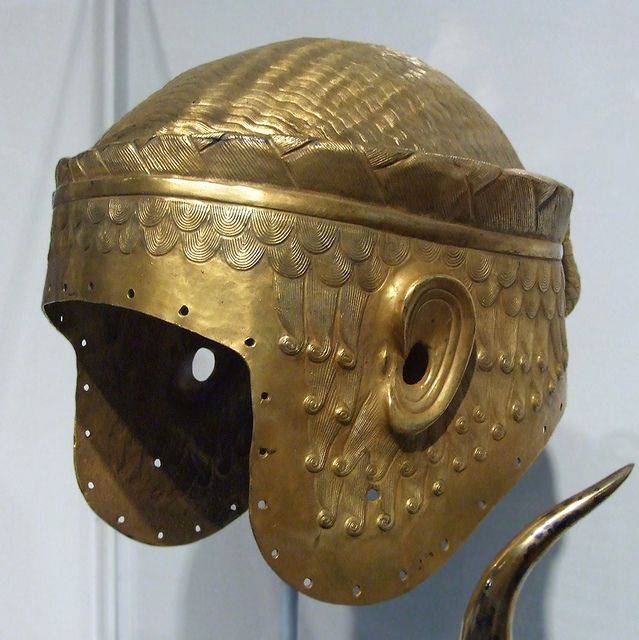 However, archaeologists and historians are meticulous people. Collecting history of the past, bit by bit, they found out that Meskalamdug was the eldest son of King Namtar from his first marriage. But he did not inherit the throne of his father, who was inherited from his second marriage to Prince Abaraggi, the son of Queen Shubad. Well, this is the same beauty, whose sculptural appearance on the skull was recreated by the same Leonard Woolley.

That's just in this case, Sir Leonard Vully “a little” cheated: giving her the features ... of his beloved wife. But when her skull was found in the museum’s storerooms and the work on reconstruction of the Queen’s image again, then ... they didn’t get anything good: the forehead was big, the nose was narrow and upturned, the eyes were deep-set, the neck was short and thick. With the growth of only one and a half meters, she was also thick!

Whatever it was, but Meskalamdug still managed to sit on the throne and rules from 2490 to 2485. BC e., but then he died from the wound he received in a duel between him and some of his accuser, who suspected him of killing his stepbrother. And his brother, in fact, died only three years after he became king of Ur.

According to the prosecutor, Meskalamdug secretly looted the tomb of Abaraggi, appropriated his wealth, including the famous helmet, entirely made of gold. By decision of the council of priests, it was decided to arrange a "battle for the truth," in which this accuser inflicted a wound on the side of the king, from which he died.

And here is what Leonard Woolley himself wrote when he excavated the tombs in Ur:
“We were truly amazed when the coffin was cleared from the ground. The body lay on its right side in the usual pose of a sleeping man. The wide silver belt fell apart. Once, a golden dagger and lapis lazuli on a golden ring were suspended from it. a pile of gold and lapis lazuli beads rose to the level of the abdomen. Between the hands of the deceased, we found a heavy golden bowl, and next to another, oval, but larger. ax from ale throne, and to the left - the usual gold ax. Behind in one heap were confused head gold jewelry, bracelets, beads, amulets, crescent-shaped earrings and spiral rings of gold wire. But the golden helmet shone brighter than all the finds. in the form of a wig, which was deep in its head and covered the face with the plates. "

And here begin new puzzles, which in the history of Meskalamdug and so lacking in abundance. The fact is that the helmet with the inscription that it belongs to Meskalamdug is smaller than the skull of Meskalamdug itself about ... a half times! That is, the helmet was not an adult, but a child! Whom? I do not whether Prince Abaraggi, to whom his stepbrother was certainly jealous, and then possibly poisoned and stole his helmet straight from the grave. Well, in order to give all this a legal look, I ordered an inscription with a proper name on my helmet — this is mine, as a child, my father blessed me with this helmet.

By the way, it is interesting that when they found Tutankhamen’s tomb in Egypt, everyone was delighted and literally shocked by the fact that it was opened to scientists in complete safety. In the 30s of the last century, when the British archaeologist Leonard Woolley excavated the royal necropolis of ancient Ur and found practically untouched tombs with an abundance of gold and numerous human sacrifices, for some reason this did not arise. 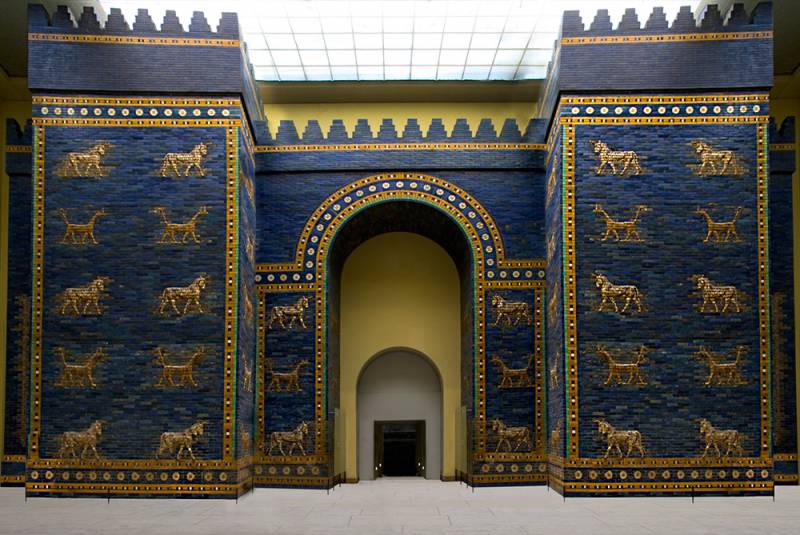 The gate of the goddess Ishtar is the eighth gate of the inner city in Babylon. ... The reconstruction of the Ishtar gate and Procession Road was carried out in the 1930s. in the Pergamon Museum in Berlin from materials collected by archeologist Robert Koldewei and shipped from Mesopotamia to Berlin.

Three tombs were especially rich and truly luxurious, and it was in one of them that they found a golden helmet and vessels, signed by the name of Meskalamdug. But the tomb was not royal - which was obvious, although a little later, in one of the neighboring looted tombs, they found the seal of Mescalamduga, where he was named king. Amazing contradiction between word and deed! This detective story, the dispute on the merits of which is still going on.

Now let's look at the so-called “Mask of Sargon” (c. 2300 BC), discovered in Nineveh during excavations in the Ishtar temple. This Sargon lived almost 300 years later than Meskalamdug and was an Akkadian, who managed to subdue all of Sumer. But look at his headdress. Here you can see everything the same as on the “Meskalamdug helmet”, including the characteristic tuft of hair neatly laid back. 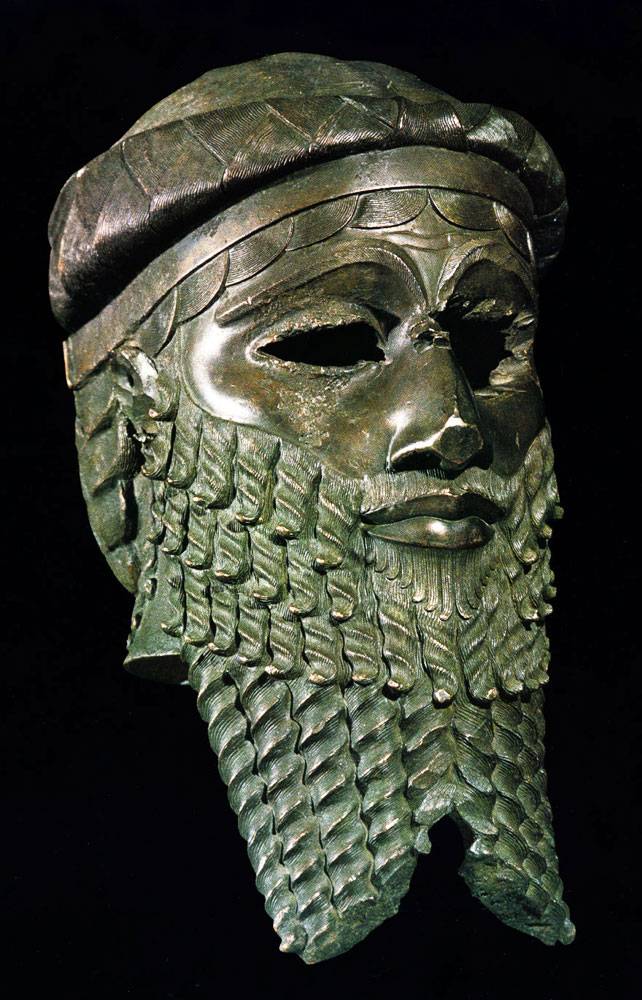 The brass sculptural head, commonly called the head of King Sargon of Ancient. From Nineveh. 23 c. BC. Baghdad, the Iraqi Museum.

Obviously, although it has been three hundred years, the tradition has remained. That is, this helmet was actually a crown and symbolized royal power. By the way, a very similar helmet is also present in the image of Eanatum (tsar Lagash), on the famous Stele of Kites, which tells about his conquests. 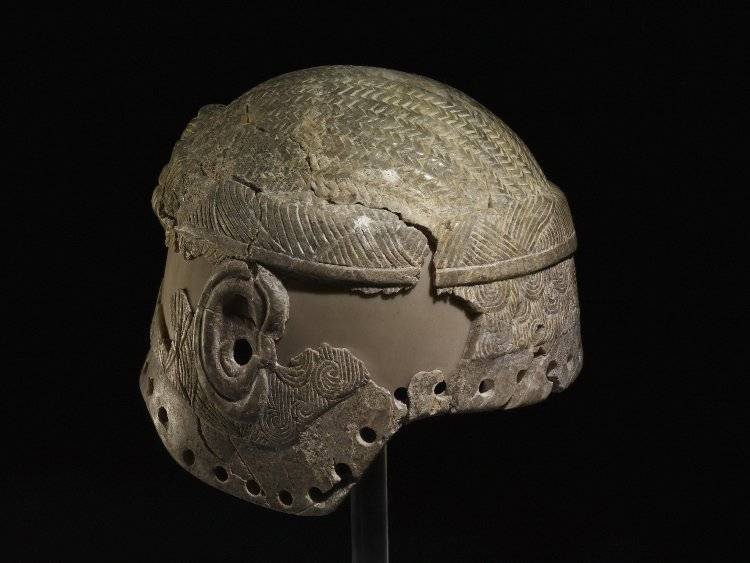 However, there is an even more amazing exhibit of the British Museum, which was bought by him in 1994 year and dated to about 2500 year BC. The fact is that this helmet is made of ... stone! The helmet is glued together from several small and large fragments and, although it differs in details from the “golden helmet”, it is quite clear that it represents something identical to it. And the question immediately arises: why would anyone need a stone helmet when it was much easier to make a gold helmet? 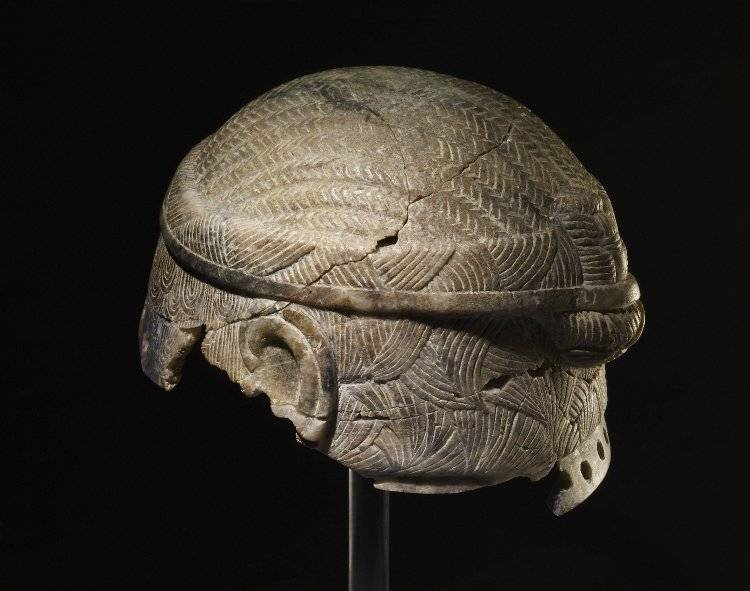 What a fine thread, right? And the holes on the rim for attaching the lining ... Why are they? Was it worn on his head? British museum.

All these and many other treasures from the excavations in Ur were exhibited at the National Museum in Baghdad. Well, the British could not bring them to England and place them in the British Museum - the time of unrestrained colonial robbery had already ended. And what, did anyone benefit from this? Unfortunately no! In April, 2003, the museum was ransacked during its assault by the US Army. At the same time, the famous “Meskalamdug helmet” also disappeared. 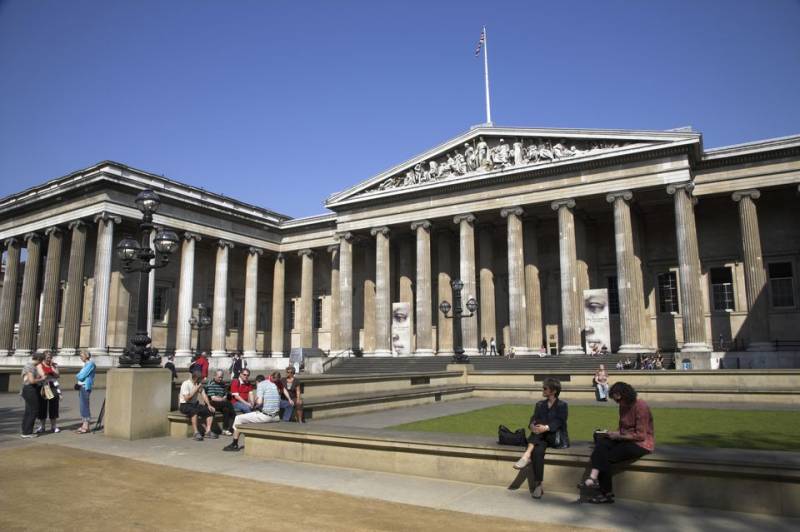 And everyone understands that it is impossible to sell it to anyone for any money, because who needs a thing that no one can declare as property, because the crazy millionaires who can do this are found only in the cinema (see the comedy “How to Steal a Million” with a charming Audrey Hepburn). So most likely, those who kidnapped him simply melted it into gold in order to make rings for tourists and help them out for a couple of hundred dollars! 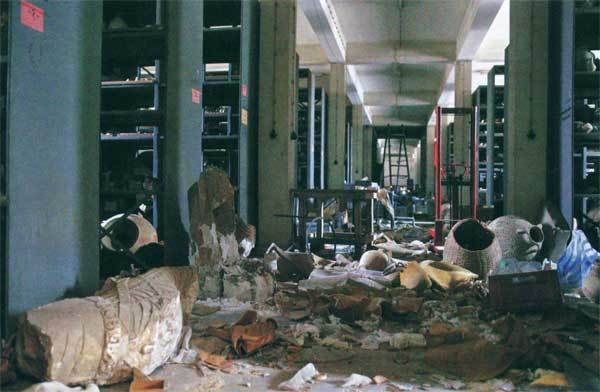 The looting of the National Museum of Iraq in 2003 during the assault of Baghdad by the US Army.

For forty-six centuries, the “golden helmet” waited for its liberation from the earth, and during this time great cities arose and collapsed and powerful civilizations perished, riverbeds changed, shallow and sea dried up, whole islands covered with forests turned into a desert, but there was practically no left its tracks on it. And so he fell into the hands of modern people and what? Less than a century, as the crown of the ancient kings of Sumer disappeared from our culture forever. 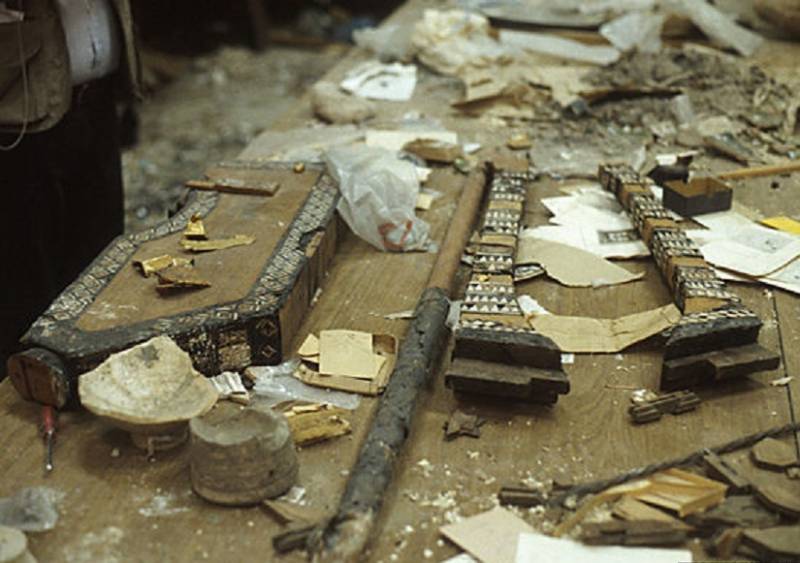 "Royal Lyre" from the royal burial in Ur. The robbers barbarously broke it into pieces, trying to rip the gold plates. They could not even imagine what a treasure of world importance they had destroyed.

True, in the British Museum thanks to the prudence of the British saved its electroformed copy.

Ctrl Enter
Noticed oshЫbku Highlight text and press. Ctrl + Enter
We are
Chernobyl notebook. Part of 3The hunt for the Blackbird
Military Reviewin Yandex News
Military Reviewin Google News
14 comments
Information
Dear reader, to leave comments on the publication, you must sign in.