Knights in the kitchen. Part of 2

April 11 2018
133
Of course, the possibilities of the medieval table were most directly dependent on agriculture - plant growing and animal husbandry. That is, it is difficult to eat sturgeon where there is no Volga, and, accordingly, grape wine is constantly there where grapes do not grow. Kliuchevskiy said that we all came out of the rye field, and the Chinese say that "if you are lazy, then this wheat". This determines not only the economy, but also the culture of this or that nation, and then the mentality of the nation grows out of it. 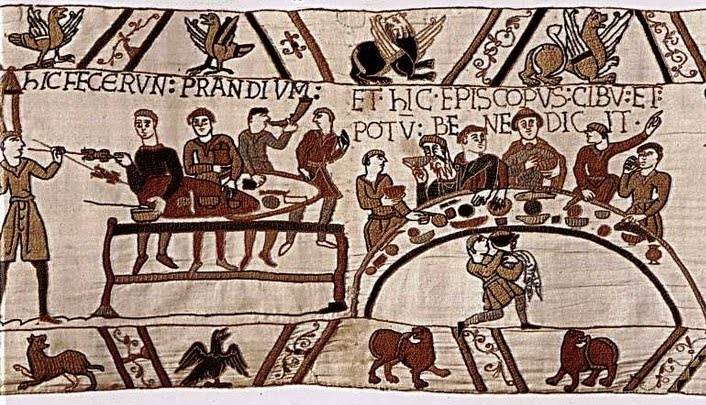 Barbecue in the Middle Ages was already known, judging by the images on the "Bayesian embroidery." We do not know whether the meat was marinated before cooking, but it was done exactly on skewers and on coals. But his knights ate on their own shields, putting them on special goats!

So, at the beginning of the Middle Ages, the breeding of sheep became almost the main occupation of the peasants of many countries. They were unpretentious, they were easy to graze, and besides, they gave meat, and milk, and wool. By the way, it was for the wool that they valued. The meat of the then sheep was tough. The fact is that sheep flocks were distilled over long distances, the sheep experienced great physical exertion, which did not improve the quality of their meat. 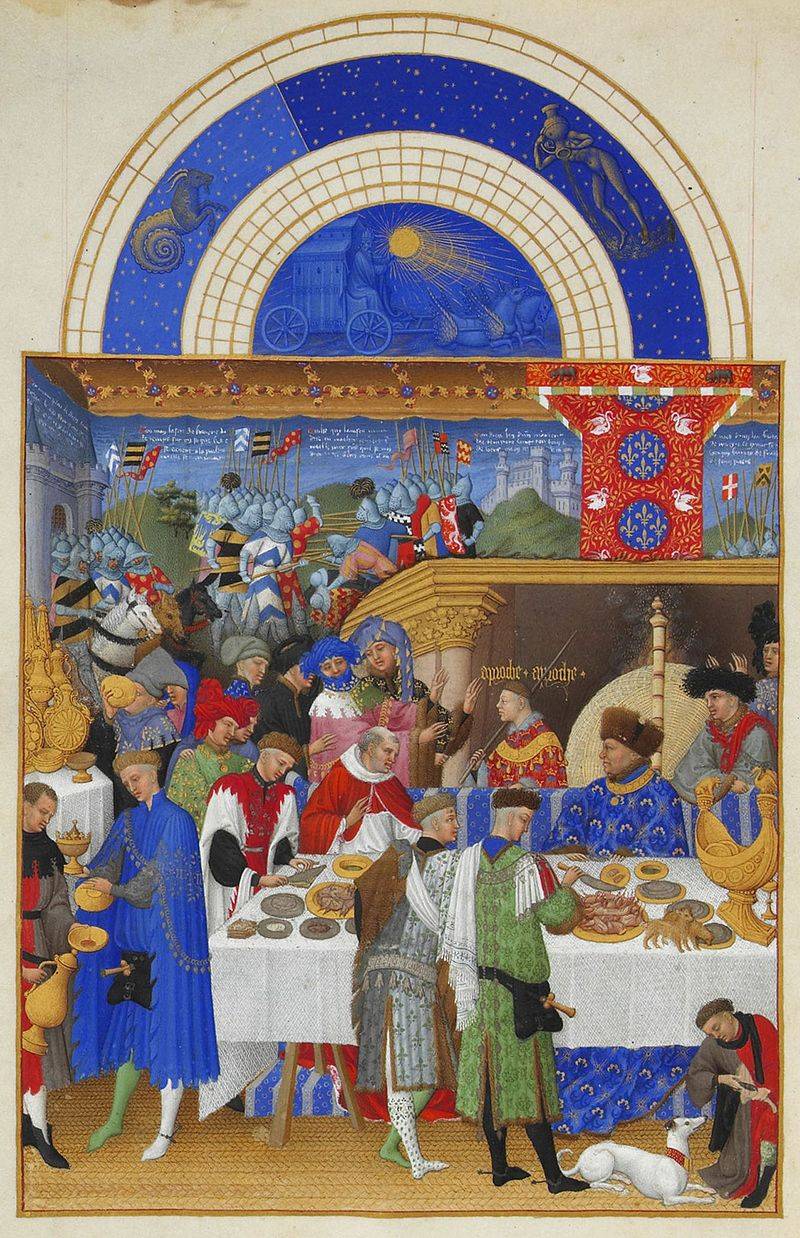 But as early as the 15th century, judging by the recipes of English cookbooks, the chefs already knew how to turn practically unserviceable meat into a completely edible product. They ground roast lamb into minced meat, mixed it with egg yolk, bone marrow and spices. It turned out the mass, from which the British made lamb meatballs, and lamb brisket stewed in a cauldron with the addition of ale, seasoned with marjoram and cinnamon. Nowadays, it’s quite simple to check how tasty it is to pick up and stew mutton in a dark beer, adding all the spices mentioned. Interestingly, ale itself has been known since the eighth century. 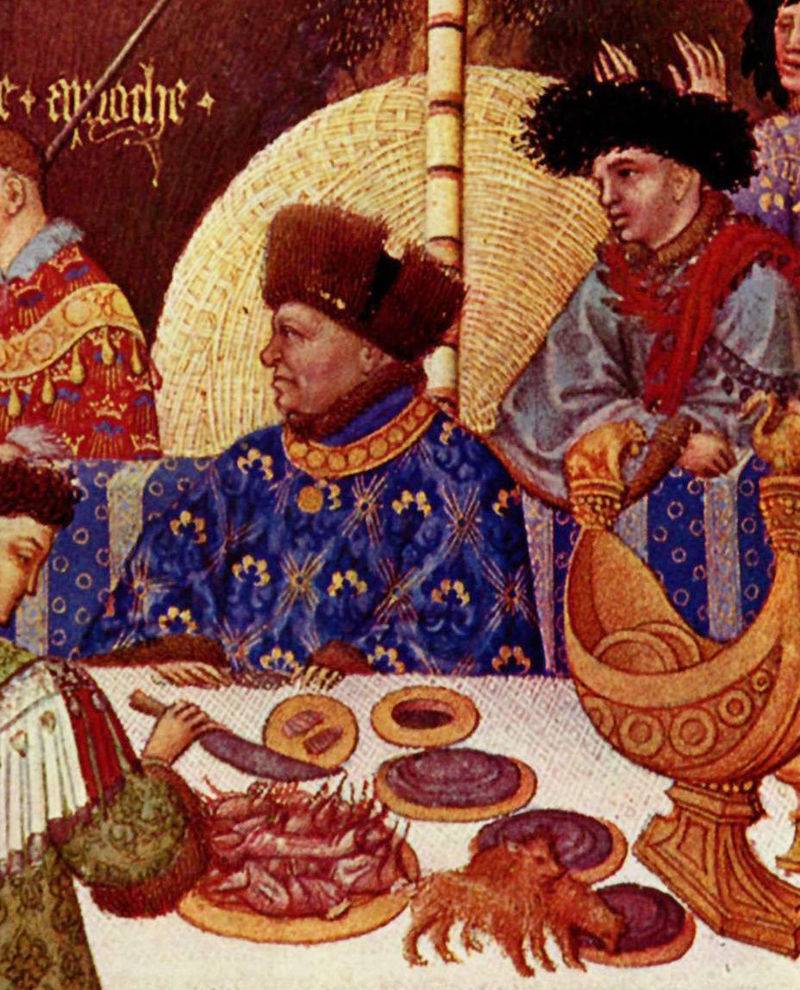 The same image, but larger (fragment). On the table run dogs, Italian greyhound. Bread with a knife cuts the carcasses of some animals ... It is possible that it is fried in honey Sony. For rabbits, they are very small!

Well, and the stuffing itself was known in Europe for a very long time. So, one of the earliest mentions of pate is the legend of how the inhabitants of the city of Chartres fed Attila's warriors with a huge pate, thus seeking to appease them. The conquerors used their pâtés in a good way and in gratitude for the food they decided not to ravage the city.

Very quickly, people learned how to make meatballs from meatballs and the same meatballs, but in Eastern Europe, they began to make zrazy or “meatballs with filling” in ground meat. The Poles, referring to written sources of the 14th century, assert that even then Zrazes were known in Poland. However, this is not a local dish: it is believed that the wife of the Polish king Sigismund I, the Milan princess, the Polish queen and Grand Duchess of Lithuania, brought many Italian dishes to Poland in 1518 — 1556. Bona Sforza. That is, it was already a slightly different era ... 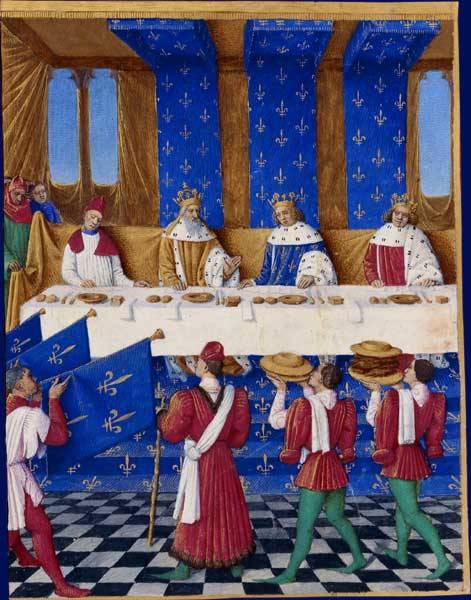 Pier of Charles V in Soot. Dishes from the kitchen were carried under the covers so that they would not have time to cool down, since the kitchens in the castles and palaces were arranged away from the master's rooms.

Well, having minced meat and guts at hand, it was not at all difficult to learn how to make sausages. However, nothing new was discovered in the Middle Ages. Sausage, as a food product, has been known since time immemorial, and references to it can be found in sources not only of ancient Greece and Rome, but also of Babylon and ancient China. But it should be noted that in medieval Europe sausage was a very rare and very expensive product, since it required a lot of work and skills for cooking. 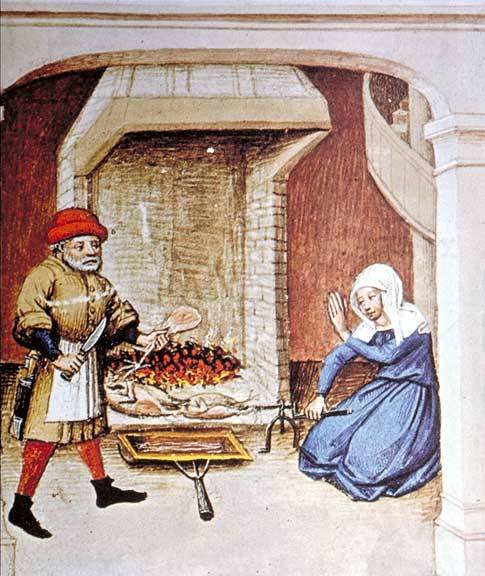 Cooking roast on a spit. The Decameron, 1432. Under the spit tray for flowing fat. Again, remember the immortal Dumas: "Goose shire, very tasty with jam!" Br-rr ...

There was not enough meat for the sausage, and vegetable raw materials, such as boiled peas, were often added to the sausages. In Milan in XVI, the word “saverat”, for example, just meant “sausage with meat”, which emphasized its dignity. The oldest recipe of saveloyat dates back to the same century. This sausage was made from pork with the addition of bacon and cheese, and minced as it should be flavored with spices - ginger, cinnamon, cloves, and nutmeg. It is interesting that at that time the sausage was not smoked, but was scalded with boiling water. 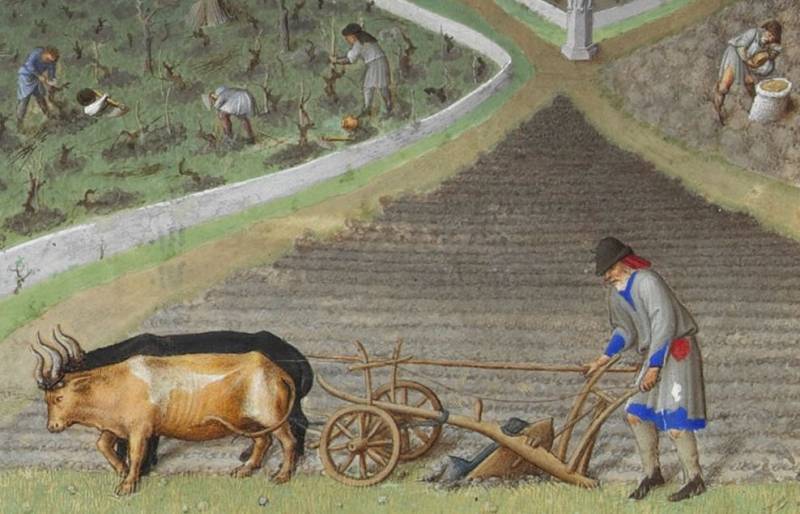 March. Plowing on oxen. Fragment of "The magnificent hierarchical system of the Duke of Berry".

However, the main on the tables in the knightly castles were "dishes of flesh." Well, let's say, a whole roasted wild boar or its head. The boar's head was generally considered not so much a dish as ... an ornament to the festive table of the powerful of the world of that time. She was surely served at royal dinners and ... remember how boarded Porton turned into boar's head and dined at the same table with King Louis XIV (the third part of A. Dumas' novel about the three Musketeers "Viscount de Brazhelon"). Properly cooked boar is head and tasty, and ... allowed me to tell guests (like the boar roasted on a spit entirely!) About the vicissitudes of how the beasts were hunted, how many thoroughbred dogs died (they say, I can afford it!) and which of the hunters how to manifest itself.

But the beef was tough, like lamb, and was a meal of commoners, because the cows were already slaughtered under old age. But here the oxtail soup in medieval Europe was approved. Her recipe was delivered to the British Isles by French Protestant fugitives. True, the British used their food before that. The fact is that when cooked, they make a strong, but not fatty broth, which the then doctors considered a medicine. But the French contributed to this recipe: they added carrots, leeks and quite a few spicy herbs to the broth. 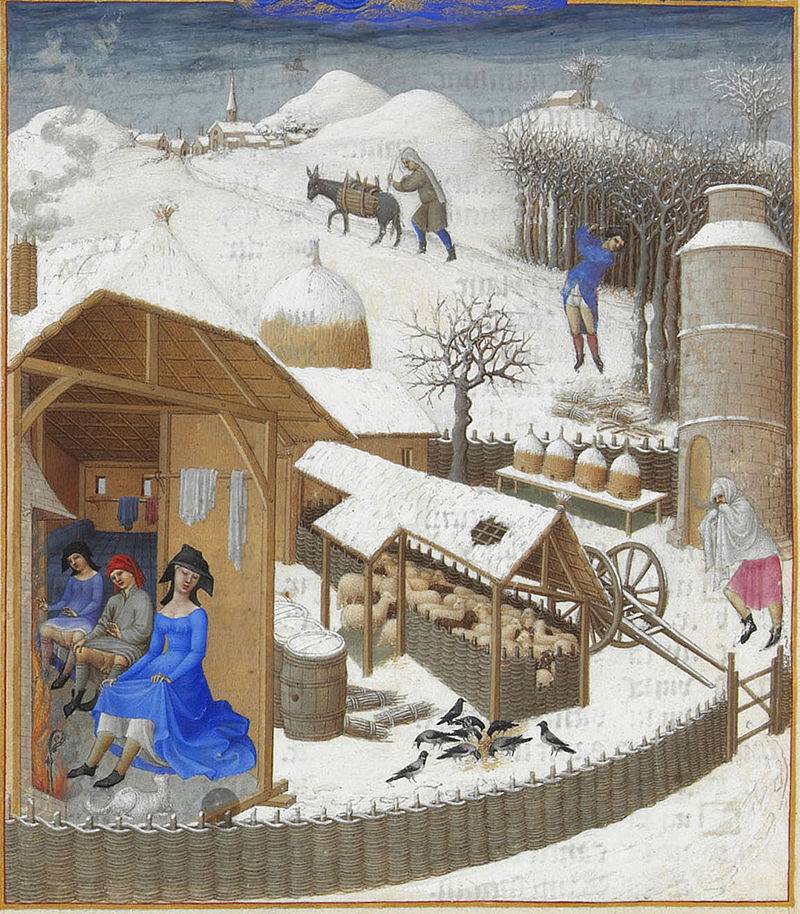 February. Sheep keeping in winter. Fragment of "The magnificent hierarchical system of the Duke of Berry".

But in the hens the people of the Middle Ages understood much more than ours. For us there are rustic hens and from poultry farms. Some are yellower, others are "darker." There are indoutenki, turkeys and geese ... But in France in the Middle Ages, they distinguished as many as four types of chicken meat: chicken, chicken, fowl and capon. And they all had different tastes, and - most importantly, they were all prepared differently! Chickens were fried and boiled. The chicken was boiled broth and extinguished, cut into pieces. Fowl was fried whole or half. But the capon - that is, the rooster, was cooked entirely, as a ceremonial dish. However, if you think that a capon is just “such a cock” and that this is what the French called him so, then this is actually not at all the case.

First of all, a capon is a rooster-neuter, and he underwent this operation at a very early age. Actually, the origin of the name comes from the Latin caponus, that is, “holoscheny”. To control the quality of the removal of the testes, the scallop was also removed: and if it grew again, this meant that the operation failed, and this capon should be isolated from his brethren, so that he would not provoke their cocky behavior. Then, the future capons needed to graze in the wild for nine months. And not just "at liberty". A lawn with lush grass was needed, a stream and a small forest were necessary - all this was absolutely necessary as a pledge of the right amount of movement and adequate nutrition, without which the desired taste could not be achieved from Capon.

The last month of his life capon spent in a small cage, where he was fed only with a mixture of corn and wheat flour, which was soaked in fresh milk. As a result, by Christmas, he weighed at least four kilograms (no worse than another turkey!) And was served fried on the table. 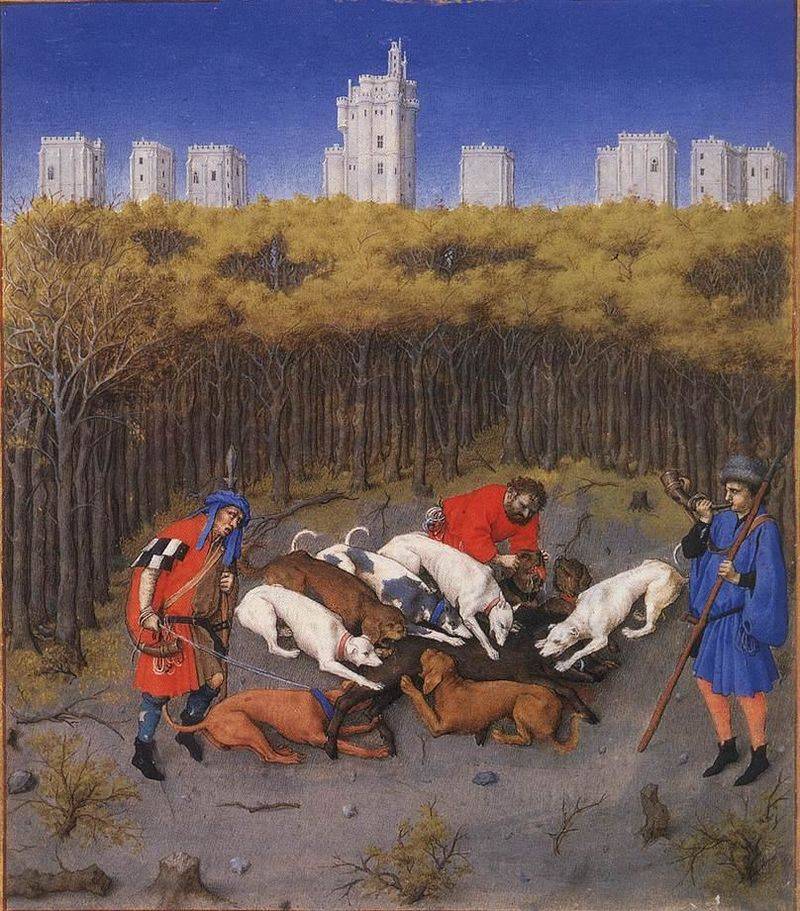 December. Harassment boar. Fragment of "The magnificent hierarchical system of the Duke of Berry".

Plyaruki - also specially fed fat chickens. The most famous were Bress poultry from the city of Bressa in western France. It is believed that this breed is about 5000 years old. Although for the first time “a bird from Bress” is mentioned in the annals of 1591, when the Burgundians helped the inhabitants of the city of Bourgogne-en-Bresse to repel the attack of the Savoy. For this, the inhabitants gave the marquis de Trefort two dozens of Bress chickens to the leader of their rescuers!

Author:
V.Shpakovsky
Articles from this series:
Knights in the kitchen. Part of 1