The United States is victorious on the west bank of the Euphrates. Trap for the Syrian army 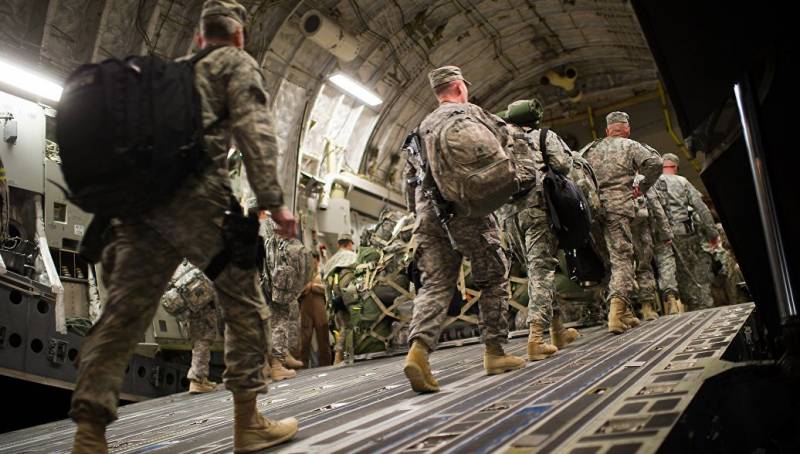 News with a note of "lightning" came from various sources of the news block tactical online map of syria.liveuamap.com in the morning of April 2. With reference to Twitter, the pages of local eyewitnesses and correspondents, as well as knowledgeable Israeli and Anglo-Italian observers @lievan_tem and @MrKyruer reported a mortar attack on the fortified / military base of the 93 brigade of the Syrian Democratic Forces, located in the south -western outskirts of the city of Ain Isa. In order not to beat around the bush, we should immediately note that, in addition to the pro-American units of Syrian Democratic Forces, the contingent of the US Special Operations Force (“green berets”) and the French Armed Forces structurally subordinate to the French Special Operations Command (COS, - “Commandement des Operations Speciales”). Naturally, this gives the event a much more serious meaning.

As it became known a little later, the well-trained militia of the so-called “People’s Resistance of the Eastern Region”, supporters of the regular Syrian Arab Army, struck. In a video posted on YouTube 28 in February 2018, a group of 6 masked men with rifles announced the creation of a new anti-American unit in Raqqa Governorate, whose goal is a fierce confrontation with the US military, any forces of the Western coalition and local Kurdish forces, related to the SDF, but nobody paid special attention to the new partisan grouping then. Today, PRER has begun active operations and attacked not the usual American checkpoint, but a large fortified area, the area of ​​which corresponds to the city of Hama, and on the territory of which there is a height that makes it possible to control the approaches to the object in all directions. It is noteworthy that a whole range of optical-electronic surveillance tools operating in the IR range, as well as paramilitary security units, could not detect anyone approaching the base at a distance of 3 — 7 km of the People’s Resistance mortar calculation (known as the NSS). This is already a huge tactical advantage in the piggy bank of a new anti-American paramilitary association in Syria, since coalition forces have shown a lack of readiness to confront small mobile groups equipped with quite serious types of weapons.

For example, if the mortar calculation NSS was armed with not ordinary mines and corrected 120-mm mines of KM-8 «Fringe" (Ammunition for mortar 2B11) + miniature unmanned aerial vehicle with a laser rangefinder-designator on the board, in the territory of 93- Some strategically important objects could be removed from the military base, since the circular deviation of the “Edge” may not exceed a few meters due to the use of the semi-active laser homing head 9E430. Do not forget that the “People’s Resistance of the Eastern Region” detachment freely acted at the operational depth of 65 km from the line of contact with the CAA in the Al-Tabka region, which indicates not only the low defenses of the base of the united coalition forces (USA, France and SDF), but also about the lack of a proper number of militant patrols of the “Syrian Democratic Forces” that control the southern approaches to the province of Ar Raqqah. 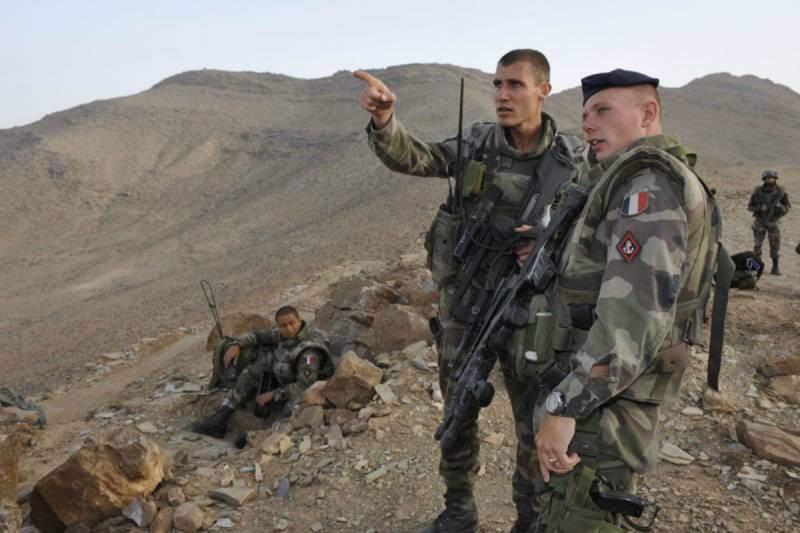 Fighters of the Marin brigade of the French Ground Forces, who arrived in Manbidge in the number of 120 people, in addition to the 500 US Marines

Some of our observers expressed concern in the comments regarding the shelling of the 93 military base, as the latter could allegedly be used by the coalition as a “casus belli” to attack the facilities of the Syrian Arab Army. But I would like to once again note that “casus belli”, both for delivering a massive rocket attack on ATS, and for the start of a major ground operation, in the areas of Manbij, Al-Tabki, Deir-ez-Zor and At-Tanfa will be found by Americans at any suitable moment. ; for example, when units of government troops begin to sweep the territories from the opposition "Syrian Free Army" and the terrorist "al-Nusra" on the border with Israel (in the "half-craft" of Al-Suweida-Dar'a-Quneitra "). According to Syrian sources, several armored brigades of the Syrian army have already arrived at the front line in Quneitra. This period can be chosen by the coalition for one reason only - due to the significant weakening of the combat potential of the Syrian armed forces in all other areas. Already today, the base of the FSA, an-Nusra and ISIS in the southern Dar'a-Quneitra de-escalation zone cannot be put sideways on the same step as Eastern Guta, Duma or Rastang boiler. Why?

Firstly, the total area of ​​the southern “green semi-pile” around Darya corresponds to half the area of ​​the “idlib bridgehead” and approximately 35 - 40 times the size of the Eastern Guta and Duma. Such a picture, against the background of the depth of the rear zones in 20 - 30 km, already requires from the command of the Syrian armed forces many times more resources for liberation, as well as time for implementation. Secondly, the number of Free Syrian Army and Dzhebhat an-Nusra units on this site is an order of magnitude or more than the number of militants in the newly liberated north-eastern outskirts of Damascus.

Thirdly, the FSA militants have serious geographic and topographic bonuses in the Essaouida-Dar'a-Quneitra triangle: there is a huge amount of heights (around 25) in the territory under their control, which allows them to quickly fix and suppress the advancing CAA groups in most directions. No less dangerous is the situation for the Syrian military directly in the fortified area of ​​Dar'a. After reviewing the map, you can pay attention to the fact that the city is located on an 50-kilometer tactical “horn”, the width of which in the area of ​​Makhadzha is only 6500 meters. The only highway M5, which connects Dar'a with Damascus, is only 2 km from the controlled militants of the territory near the village of El Mujaydil. Consequently, in the very first days after the start of the operation to liberate the south-west of the SAR, the Syrian army units in Daria could be blocked and defeated.

The Syrian Arab army will be able to avoid such an unpleasant scenario only in the case of the pre-emptive blocking of the “Isthmus” of “Izrah - Busrah al-Hariri”, but at present there is almost nothing reported about the accumulation of government forces in this sector.

Fourthly, this oppositional “half-armed” has a common southern border with Jordan “purchased” by American defense structures. Through the territory of this state, FSA militants in southern Syria can regularly receive military-technical support from both the United States and Israel, and from Saudi Arabia, which has long been interested in the overthrow of Bashar al-Assad. For example, according to the Wall Street Journal, Tel Aviv began unofficial support for the militant opposition in the Dar'a area around 2015 since the latter forms a kind of buffer zone between Israel and the Syrian Arab army. Do not forget that in the area of ​​the city of Tasil there is a decent enclave of ISIL (prohibited in Russia), which will also play into the hands of Tel Aviv and Washington in the course of an attempt by government troops to liberate the southern territories. 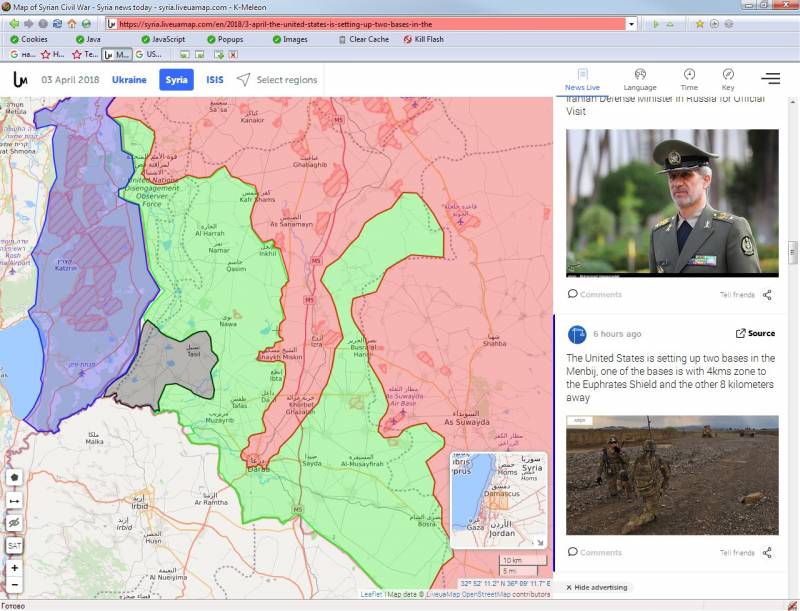 Through the Jordanian-Syrian border, any type of chemical can be easily delivered to the “semi-staff” of “Essaouida-Dar'a-Quneitra”. weapons Western production, which will be used for new provocations followed by the accusation of the "Assad regime". Based on the above facts, we make a disappointing conclusion: if the suppression of the formations of the "Free Syrian Army" and "Al-Nusra", as well as forcing the "remnants" of the "Ahrar al-Sham" to leave the miniature East Guta and go to Idlib by green buses more than 2 months, the liberation of the southern provinces of Dar'a, Essaouida and Quneitra will take from a year (in case of blocking Western military support through Jordan) to two to three years (in the presence of such support). Shutting off ground-based channels for the supply of military goods to rebels is possible only by blocking the Ar-Ramt-Dar'a and Al-Mafak-Sayid highways from Jordan. Consequently, the attack of any convoy of vehicles on these highways through the Russian Aerospace Forces and the Syrian Air Force will be perceived as an aggression against Jordan, with all the ensuing consequences.

More generally: due to the presence of the Jordanian-Syrian and Israeli-Syrian sections of the border, the southern “half-cattle” FSA will be able to receive regular Western support, exhausting and weakening the most combat-ready units of the Syrian army, after which the armed forces of the United States and Great Britain will be able to make an unobstructed “throw” from At-Tanfa virtually any direction of the Syrian theater of operations without serious resistance from government forces. Conclusion: the decision to storm the so-called "southern semi-boats" is not just counterproductive, but completely losing. Dar'a will turn into a real tactical “trap” for Moscow and Damascus, constantly pulling technical and human resources. And, unfortunately, Damascus has already been led to this “trap”.

The Pentagon, meanwhile, is actively increasing its momentum towards the militarization of the west bank of the Euphrates. Showing reluctance and fear of confrontation with the US Armed Forces, Recep Erdogan nevertheless waited until the construction of two US military bases located in 4 and 8 km from the Sajou River, separating the territory controlled by the SDF from the territory of Jeralus, controlled by the Proto-Turkish FSA units and the Turkish army. It is known that one of the bases is located near the village of Kvardala et-Tahtani and allows you to control the central 216-th highway. Already today, Manbij can be considered the second main springboard for the US offensive on the southern borders of Aleppo. Overnight, Manbidge was under the protection of the United States. As support, 50 arrived from the French Marin Brigade, which is part of the French ground forces. And this is only the beginning of the grand unfolding of coalition forces on the right bank of the Euphrates, not counting the bridgehead near the city of Al-Tabka.

And what does the Syrian Arab army have on the left bank of the Euphrates to create a coalition of a worthy counterbalance? That's right, a miserable “Hushama pocket,” who is daily at risk of being absorbed by technologically superior forces of the USCM and the SDF. And with this you need to do something. It is here that the partisan detachments of the “People’s Resistance of the Eastern Region” (NSS), which we described in the first part of the review, are very helpful.

Ctrl Enter
Noticed oshЫbku Highlight text and press. Ctrl + Enter
We are
A coalition led by the United States is preparing a hybrid strike on Syria. "Green berets" seen in the "el-Babskiy bridgehead"Putin's geopolitical chess with Washington in Syria and Eurasia (“voltairenet.org”, France)
Military Reviewin Yandex News
Military Reviewin Google News
59 comments
Information
Dear reader, to leave comments on the publication, you must sign in.