The Chinese will give the "Vikings" to the Russian fleet

April 5 2018
164
The dynamic development of the global geopolitical situation confronts Russia with the need to take non-standard military-strategic decisions. 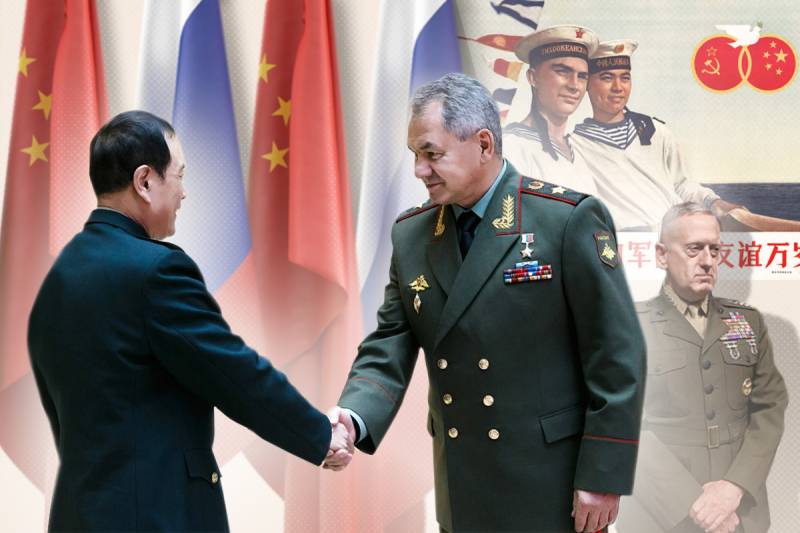 China demonstrates a historically unprecedented level of friendliness towards Russia. Including in the extremely sensitive military-political sphere. This is evidenced by the maximum representative level of the Chinese military delegation’s arrival in Moscow at the 7 security conference. The head of which, the PRC Minister of Defense, Colonel-General Wei Fenhe, bluntly emphasized that the purpose of his visit was to express a common position with Russia on international issues.

The notorious "Eastern cunning" has absolutely nothing to do with it. Rather, there is a complete triumph of healthy pragmatism. The almost consensus understanding by Moscow and Beijing of the main problems and threats to the modern world creates a solid foundation for the development of mutually complementary geopolitical strategies and opens up great opportunities for cooperation between the military departments of the two countries, which is beginning to take the form of very advanced cooperation in some areas. So, for example, according to reports from Chinese publications, negotiations are currently underway to conduct temporary training "internships" for pilots of the Russian ship aviation on the first Chinese aircraft carrier Liaoning (former Soviet Varyag).

"Speech is about pilots of the 100th and 279th separate naval fighter aviation regiments of the Northern Aviation fleet The Russian Navy, whose flights from the deck became impossible due to the installation of the only Russian heavy aircraft carrier cruiser "Admiral of the Fleet of the Soviet Union Kuznetsov" for repairs, the completion date of which is difficult to predict. In view of this, the Russian side appealed to the Ministry of Defense of the People's Republic of China with a request to conduct “training” tours of Russian ship pilots on the almost identical Chinese aircraft carrier Liaoning for the period of repair of Admiral Kuznetsov. Chinese magazineNews Aviation ”reports that the Chinese side has responded positively to this request and detailed negotiations are underway, for which a group of Russian military specialists arrived in the PRC at the beginning of the year.”

This practice of training internships on aircraft carriers in other countries is not news. But it should be emphasized that such “services” render to each other mainly states that are in very close military-political relations. For example, NATO member countries. Thus, Russia and China actually demonstrate a similar, that is, a very high level of military-political rapprochement.

It is quite obvious that this trend in relations between the Russian Federation and the People's Republic of China is not a tribute to the fleeting political situation. For it is based on the long-term coincidence of interests of the two powers, which are preparing, during a very long historical period, to jointly defend their interests in the struggle for a multipolar world against the forces of world hegemony and unipolar dictate, which the present-day West personifies.

This global confrontation, within the framework of which Russia and China objectively act as allies, will determine the geopolitical climate on our planet for a number of decades. In the foreseeable future, it makes it very difficult or even impossible for the unfriendly expansion of the PRC to the Russian sphere of influence.

Thus, the political and military leadership of the two powers today has sufficient grounds for building up their relations on a long-term and solid basis. In particular, in the military sphere, they can go much further than even the current unprecedented Russian-Chinese joint training on an aircraft carrier.

So, for example, the Russian side can use to its advantage a significant reserve that has been created in China in the field of naval construction. As far as can be judged from the information coming from the People's Republic of China, in this country a powerful industrial and technological base has been created for the full-scale construction of ocean-class warships. Including aircraft carriers, which the Chinese in the coming years intend to, as they say, bake like pies.

Meanwhile, the in-line production of any equipment, including the naval one, means its very significant reduction in price as compared with piece orders for individual ships. It is precisely the problem of such extremely expensive “uniqueness” of combat units, in the conditions of a serious shortage of state resources, that has the most negative effect on the development of the Russian aircraft carrier program. Which for almost twenty years stalled in one place.

Meanwhile, the experience of using the Russian armed forces in remote theaters of military operations, such as the Syrian one, has shown that the presence of a powerful fleet supported by aviation is one of the key factors for the successful implementation of the country's military-political plans. And in this sense, one Russian aircraft carrier, which hardly gets out of repairs, does not solve any problems.

To develop in the present conditions, and at a fast pace, our own industrial base for the construction of the aircraft carrier fleet of Russia, firstly, will be rather burdensome. And secondly, it, as a predominantly land power, has many other, more priority military tasks.

Thus, a quite relevant question arises: what, strictly speaking, prevents Russia, without delaying the matter indefinitely, agree with China on building two or three aircraft carriers for the Russian fleet at Chinese shipyards? Moreover, the intellectual basis of the Chinese aircraft carrier program is our own, even Soviet projects and technologies. And, accordingly, no problems with the adaptation of these ships to our conditions, as well as with their maintenance should arise.

For some reason, I am sure that the Chinese will gladly accept such an order and build us quite combat-ready ships, in very short periods for Russia and two or three times cheaper than it would have happened with a piece of domestic labor.

As for the possible Chinese fears about building such powerful combat units for Russia, they can be completely neglected. The Chinese, not worse than ours, understand the long-term nature of the current geopolitical proximity of the PRC and the Russian Federation. And besides, they, like us, are well aware that the two powers that have a huge land border, even if they ever fight with each other, the role of aircraft carriers, and the fleet in general, in such a purely hypothetical war will not be main.

As for the national pride of the Great Russians, she will not suffer from such a Chinese order. And even the opposite! China will finally begin to play the same role for Russia as it plays for the United States today - a large manufacturing plant based on American technologies. Only in this case, the construction technology of aircraft carriers will be basically Russian, which is a matter of pride rather than shame.

There is nothing shameful for the Russians and the fact that the Chinese in this area today clearly took the lead. This finds a logical explanation in the specifics of the military-political tasks of China, much of which requires powerful naval support. Here and the problem of Taiwan and the American military pressure around the perimeter of the Chinese maritime borders. Until recently, the Russian Federation had no such problems at all. Therefore, the relevant military programs were in sleep mode.

Meanwhile, the Russian order for aircraft carriers can be placed in China on a mutually beneficial commercial or even on a barter basis. The Chinese are still interested in acquiring a whole range of modern Russian weapons and, one can be sure, they will gladly accept them as payment for their shipbuilding efforts for the Russian Federation. Well, in the end, Russia has natural resources that are not at all superfluous for the Chinese.

Given the current international situation and the fact that the time factor begins to play a key role in making major government decisions, the opportunities that open up for Russia thanks to the unprecedentedly high level of its mutual understanding with China should be used to the maximum. Moreover, the economic and military-strategic effect of the forced implementation of a joint aircraft carrier program can be simply overwhelming.

All this, of course, requires the most careful analysis and calculation. One can not be doubted. The geopolitical trends indicated at the beginning of the article will determine the face of the modern world for decades. And, therefore, Russia has more than enough time for the construction of aircraft carriers in cooperation with China. In such a development there are even historical justice, because China will thus return the great debt to the country that stood at the cradle of its carrier fleet.

And if even sometime, far beyond the horizon of the future, world political trends change, and a black cat runs through the relations between the Russian Federation and the PRC, it would be better if by that time we even have Varyags built in China, than empty dreams and eternal discussions about building your own ships of this class.

Ctrl Enter
Noticed oshЫbku Highlight text and press. Ctrl + Enter
We are
Situational analysis of the death of the MH17 flight (Malaysian Boeing 777), made on the basis of engineering analysis from 15.08.2014Strangulation: the context, conduct and consequences of the American naval blockade of China
Military Reviewin Yandex News
Military Reviewin Google News
164 comments
Information
Dear reader, to leave comments on the publication, you must sign in.