Room with a "dead cat" from a British clown

April 4 2018
53
When the European Union breaks like an earthenware cup, they will curse England, a red clown Boris Johnson with his number “dead cat” under the sauce “Newbie”. Boris Johnson owns a pearl with a “dead cat” on the table: in his writings, he suggests, in case of difficulties with partners, “throwing a dead cat on the table” in order to transfer everyone’s attention to an unsuitable object, and at this time to do his dirty work. So the idea to throw on the European table the "Case of the Violin" may belong to him personally. 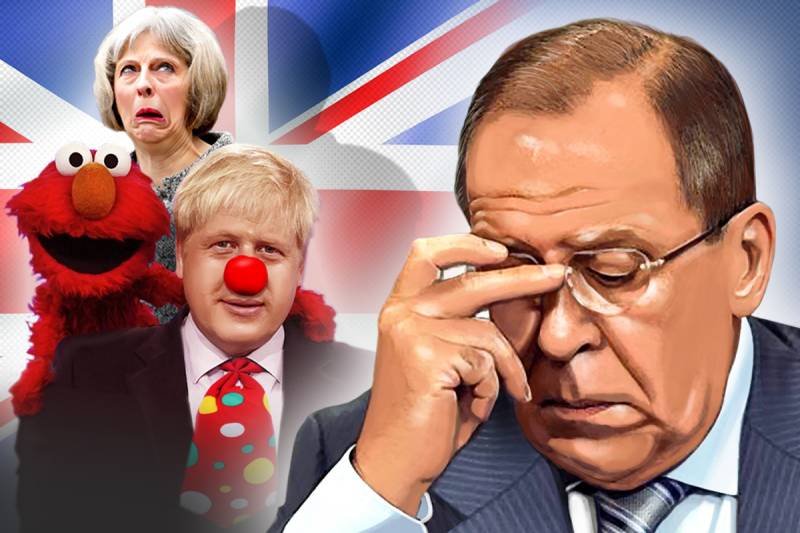 This English scandal is reaching its international climax. Foreign Minister Sergei Lavrov accused the West "of blatant lies in the case of Skripal." Earlier, Lavrov spoke of "manipulating international public opinion" of certain forces, now it is said directly: The West frankly lies. Moscow responded to the direct accusation of involvement in the "Skrypal case" by directly accusing the West of lying. This says that Moscow no longer sees the possibility of reaching some kind of compromise with the West on the “Skripal case”.

Now the West will have to agree that he is a “frank liar”, or continue to lie further, as he is still lying about the “Malaysian boying”. The latter is more likely, therefore the international crisis around the “dead English cat” will continue.

Earlier, the opinion was already expressed that the “Case of the Violin” is a false casus belli, a pretext for the war of the West with Russia, and there are precedents: the killing of the Austrian Archduke Ferdinand in Sarajevo became the formal reason for the First World War. In England, the violinist and his daughter were poisoned. Since nuclear world war is considered impossible, one comes to the idea that the West means “hybrid world war” in all environments except the military.

But it is impossible to isolate Russia with the help of a hybrid war, since it is already isolated from the West by sanctions, then there is simply no place. It remains to cut off energy flows between Russia and Europe, but for Russia this is not critical: it will go to Asian, non-Western energy markets, primarily through the Power of Siberia gas pipeline to China.

Formally, Washington and London are using the Fiddle Case, ostensibly to further isolate Russia, apparently football and the like, and to consolidate the West in front of the “Russian threat.” This is also a lie, another operation of a certain “deep state” “under a false flag”, since these goals are illusory. The ultimate goal of the dead cat number under the “Novice” OB may be the collapse of the European Union, this is both an achievable and desirable goal for the Anglo-American elites.

Anglo-American experts, including George Soros, have long talked about the inevitability of the collapse of Old Europe, under Russian pressure, of course, but to the economic benefits of America and England, who were the first to profit from this collapse. If America did not succeed in destroying Russia, and now, after Vladimir Putin’s March 1 speech, it is clear that they will not succeed, then America needs to destroy someone else to solve its economic problems.

And the old Europe is the most suitable and economically fit candidate, also a “herbivore,” according to ex-German Foreign Minister Sigmar Gabriel. The withdrawal of England from the European Union is the preparation of America for the dismemberment of the "herbivore", that is, without its own army, Europe. In Europe, many people understand this, probably, but they can’t do anything, and go to the slaughter with a noose of the “Case of Skrypal” on the neck. And they wink at Russia: we understand everything, but we cannot do anything because of our “herbivorousness,” and Atlantic solidarity, of course.

When, with the help of the number "English dead cat", collapse of Europe, it will be extreme red clown Boris Johnson, retired. He will make a company to another liar in retirement - Tony Blair, and this will be all the consolation for Europe: the whole foreign minister of England, with Prime Minister Teresa May, will be punished for this by resignation. I wonder who the first in Europe will say that “the king is naked,” that England lied? This is inevitable, because a further break in the economic ties between Europe and Russia will lead to energy strangulation and, as a result, to the disintegration of the European Union - this is the only realistic attainable goal of the “Skripal case”. Before death, the victim usually speaks the truth.

Paradoxically, however clever our liberals ... Whatever happens, on any "Skrypal" our TV liberals, Nadezhdin, Nekrasov and Rybakov, are advocates of the West. They creep before Europe, Europe before the main reptiles in America. A terrible clown appeared in our country - Nikita Isaev, fortunately, on TV, and not in the ministry, like the red-headed clown Boris Johnson in England.

Ctrl Enter
Noticed oshЫbku Highlight text and press. Ctrl + Enter
We are
Toxic substances "Novice": do not exist, but used?Reports from the militia of New Russia for 27-28 September 2014 of the year
Military Reviewin Yandex News
Military Reviewin Google News
53 comments
Information
Dear reader, to leave comments on the publication, you must sign in.