Russian wiles on the bottom of the sea

April 3 2018
50
The sudden hysteria of the Western press over the stay in the South Atlantic of the Russian research ship Yantar may have a direct connection with the continuing search for the lost Argentine submarine. 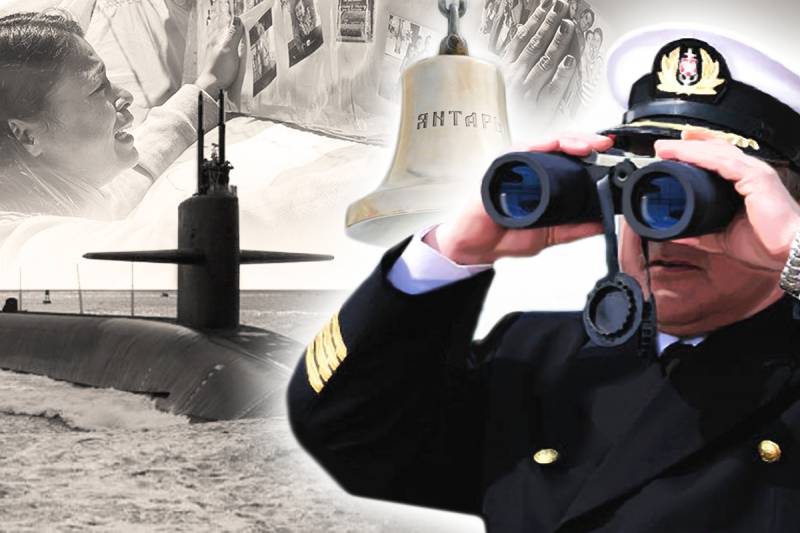 And nevertheless it is also possible to learn something from a potential enemy. For example, the deepest realization of the indisputable truth that the best method of defense is an offensive. Especially on the battlefields of the information war. The day does not pass without the western "acrobats of the feather, the farce hyenas and the jackals of the rotary machines" did not give out to the heart another heart-breaking history about unthinkable treachery of Russia, which intrigues around the world. And even at the bottom of the sea!

No sooner had the propaganda volleys on the case of Skripl poisoning died down, as another deafening cannonade was approaching. This time, the whole world was asked to attend to Russian intrigues in the South Atlantic, where, it is dreadful to say, the Yangtar oceanographic ship of the Russian Navy has been cruising for several months already. Which, according to the western version, it is not known what it does there, but there are suspicions that it is something very bad.

“Russian ships circulate around submarine communications cables, forcing the US and its allies to worry that the Kremlin can remove information from communication lines laid in the ocean depths and thus open new rounds of information warfare between East and West. Our opponents can be aimed at submarine cables that connect the countries of the world with each other ”(in any case, it is stated in some media in the West).

“Will Moscow deal with violation of communication (that is, break of cable lines) or is it just going to connect to them?” Does the Kremlin want to cause Western concern in this way that such actions are potentially possible? Is there a more innocent explanation for the actions of Moscow? It is not surprising that Russia doesn’t say anything about this, ”the Russian ship to the South Atlantic interprets the Associated Press. Source.

It is noteworthy that the Moscow edition, which retransmitted another western tantrum, did not even go into assessing the plausibility of the above charges and immediately put them in its headline, taking for granted the "import" version of information wars on the ocean floor.

However, we will not hurry with such an unconditional trust in the conjecture of a potential foe. Especially this, which chronically lies, without blushing, and which is always and only Russia is to blame.

In addition, in this case there are certain grounds for believing that the hype raised by Western media around Yantar’s activities in the South Atlantic actually has completely different, much more serious reasons. On the essence of which the West, however, really do not want to speak out loud. Therefore, they invent everything on the go there, just to discredit the Russian expedition and achieve its termination.

Where does such agility come from? Let me remind you some facts. Especially considering the fact that there was practically no place for them in the extensive reprint of Western inventions by the Moscow edition.

As is known, in November last year, the Argentine submarine San Juan, along with the entire crew, disappeared without a trace in the South Atlantic. The international community, as usual, initially reacted vividly to this tragedy, and the leading countries of the West immediately sent their search forces to the disaster area. Russia also responded, urgently sent its deep-sea apparatuses to Argentina, and then redirected to the same ship the Yantar, which at that time was performing the task in another region of the World Ocean. 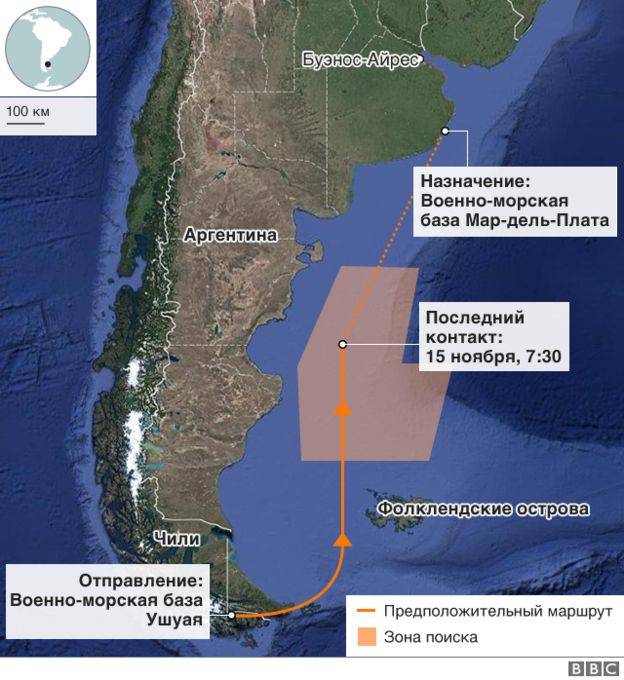 However, as soon as the time had expired, during which the hope of saving the sailors remained, the western participants of the rescue operation immediately announced the completion of their mission and left the search area. Only the ships of the Argentine Navy and the Yantar, who soon arrived to help them, remained in place.

Argentines have announced that they will search for a submarine until they find it, because they want to establish the cause of its death. However, the Navy of this country has practically no deep-water technology and, accordingly, they are extremely limited in their search capabilities. The Russian authorities went to meet Argentina and agreed to continue the mission of "Amber" in this region. 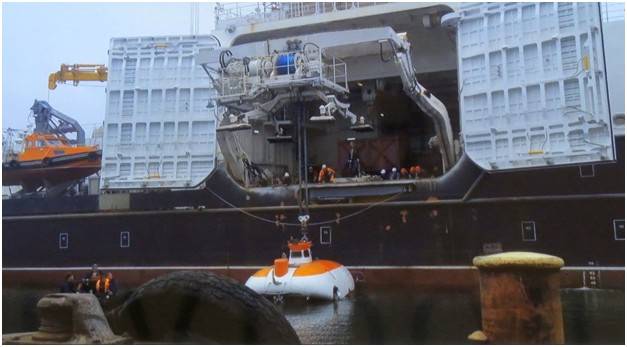 In addition to humane motives and an understanding of the need to strengthen friendly relations with one of the largest powers in South America, Moscow was probably guided by other considerations. The most important of which, of course, was the desire to maximize the capabilities of a real deep-sea search operation for the crew to acquire a Russian vessel, including for rescuing submarine crews, invaluable practical experience. Especially necessary for the Russian Navy in connection with his return to the world's oceans.

These reasons alone are more than enough to completely exclude any other versions regarding the motives of the Russian expedition to the South Atlantic.

As for the current Western insinuations about the harmful "Amber", which almost tries to cut through all the telephone cables at the bottom of the sea, then to commit such sabotage it is not necessary to drag along to the backwater of the World Ocean and world politics. This should be done, for example, in the North Atlantic, through which the bulk of all strategic submarine communication lines between North America and Europe pass. And if we take the western version as a basis, then the commander of “Yantar” is fit to reprimand for inappropriate use of the entrusted technology and vain consumption of service life.

I think, however, that Western “chiefs of panic” do not care about the wear and tear of Russian equipment and even the safety of South Atlantic communication cables. At the same time, there are certain grounds for believing that the causes of their concern for the “overly prolonged” mission of “Yantar” are directly related to the fate of the missing Argentine submarine. Which the Russians, along with the Argentines clearly agreed to look to the bitter end.

This means that when the boat is found, it will be installed and the cause of its death. Does this development meet the interests of the West? Is not a fact! Otherwise, why did the ships and aircraft of the US and British Navy leave the search area immediately after the rescue part of the operation was completed, without even trying to find out the cause of the disaster? Are the Anglo-Saxons so uninteresting? Or do they just know why it was “San Juan” that went down, but at the same time they categorically do not want anyone else to know about it?

Reasons for such suspicions exist. Here is one such evidence:

"Jessica Medina, whose brother Roberto Daniel Medina served on the lost submarine, in an exclusive interview with the newspaper La Gaceta said that a few days before the official loss of communication with a submarine through the WhatsApp app Jessica Medina received a message from brother: “It was a strange message in which he told us that a British helicopter and a Chilean warship are looking for their boat. Unfortunately, the conversation was interrupted. And that was the last message. ”In earlier reports, my brother told Jessica that they were swimming near the Falkland Islands, because of which there was a war between Britain and Argentina. This, in particular, explains the pursuit of the submarine by a British helicopter. Also, Jessica Medina added that many other families of the missing crew members also received messages from loved ones that at the time of the last contact the boat was fleeing from a British helicopter. To the question “Why didn't she say this before?” The girl honestly replied that she was afraid that other families were also afraid to say something. However, she decided to set an example for them all, because she knows that she is not the only one who is afraid and knows. ”

It is also noteworthy that the incident with an overly outspoken girl instantly hushed up, calling her message "wild and completely wrong." And the British Admiralty, which seemed to be completely irrelevant, immediately notified the world that "the girl’s claims are completely untrue."

But perhaps the most piquant is that all the royal army of Western propaganda, which shows miracles of ingenuity and perseverance, when it comes to the composition of the “Russian gas Novice” or the “doping diet” of Russian athletes, in this case amicably made pretend they weren't here. Can you believe that the innumerable legions of western borzopisty so uninteresting? I know only one case when they become such: if they were directly ordered to shut up and not go where they shouldn't go.

But the fact that they do not climb, just indicates that in the story of the death of "San Juan", the role of the West may not be the last. Especially since the motives of the Anglo-Saxons are more than enough. After the memorable Falklands War, they did everything to turn Argentina into an eternal outcast. And since then, do not miss a single case to remind her about it. Perhaps it was just such a case that they presented in November last year.

And if not for the Russian “Yantar”, the ends of this grim story would have been safely hidden in the water. It is possible that it was for this reason that some people urgently needed to remove it from there.