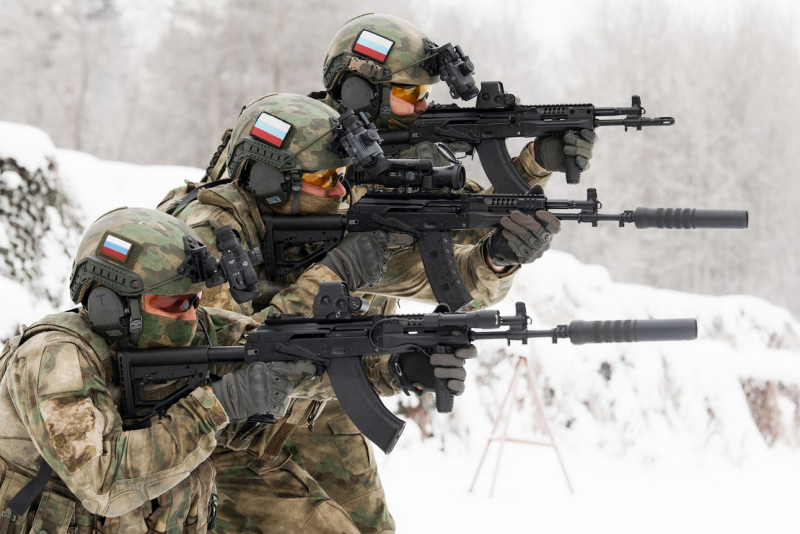 Dual sensations and diverse thoughts evoke the latest news from the world of gunsmiths. We have already shown in the article devoted to the patrons, a fresh video from the Kalashnikov concern, dedicated to AK-15.

At the end of January of this year, it was reported that AK-12 and AK-15 passed state tests and were approved as small weapons and adopted by the Ministry of Defense for service.

Fine. Automatic machines are significantly different from AK-74 for the better, more modern, have many advantages. It's really good news.

Then begin the reflections of pure water.

The part was announced in a previous article on cartridges ("7,62 mm: step forward or backward? "), The rest will be considered here.

The question arises: the presence of two machines of the same system with different caliber - it will not be too fat?

Even if the good old 7,62x39 cartridge of the 1943 model of the year allows something that its younger colleague of the 5,45 mm caliber cannot. Namely, to provide the necessary armor penetration and use of the cartridge with PBS.

But there is another cherry. Simultaneously with AK-12 and AK-15, the Ministry of Defense also adopted two automatic development machines for the Kovrov plant named after Degtyarev. 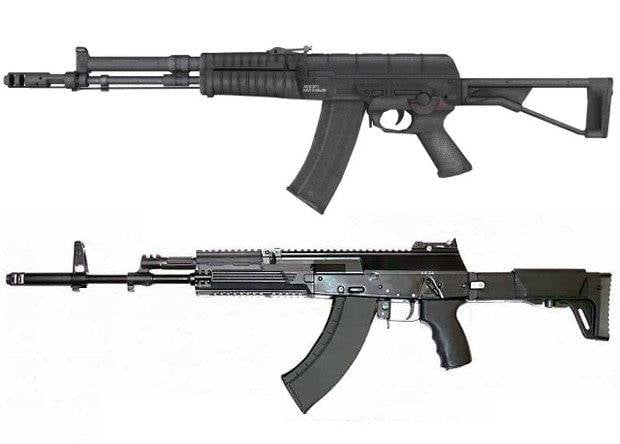 And now we come to the main question: why did the Ministry of Defense need automatic machines of different caliber and different manufacturers?

To say that AEK (any number) is a long-term construction, it is nothing to say. The plant team worked on the brainchild for more than 40 years, and in the end, it nevertheless successfully completed the work. But if at the beginning of the journey AEK was superior in many TTX to its direct competitor AK-74, then today the situation is somewhat different.

What is the difference between Izhevsk and Kovrov products?

Even outwardly, they are similar. The machines of both firms are not two, but three modes of shooting: single, a turn and a short line with a cut-off of two shots. Possible attachment to the forearm any tactical utilities such as LCC, handles, flashlight. On the Picatinny rail on the cover of the receiver can be placed a sight. Folding and telescopic butts.

And of course, models of 7,62 mm caliber can use a device for silent shooting.

Again, the external (and most internal) qualities and characteristics of automata are very similar.

Kovrov designers used a balanced automation scheme, which improved the accuracy of shooting at 15-20%. A more complex design led to a rise in price and, as an option, less reliability.

Of course, if we take AK-47 as the standard of reliability, then there is nothing to compare at all.

Nevertheless, the specialists of the Ministry of Defense were satisfied with the quality of the carpet products, once they took the machine guns into service.

Further, the Defense Ministry believes that the more expensive but accurate A-545 and A-762 will arm the special forces and attack units on a contract basis, while the AK-12 and AK-15 traditionally occupy the niche of mass weapons.

In general, everything is understood. With one single exception. Two patrons.

If the “degtyarevskimi” machine guns arm the best of the best, and the “kalashnikovskimi” everyone, then it probably will not cause a big headache. Example - "Abakan", AN-94 in BB / Rosgvardii / MVD and other structures. There is. And there are no questions for him.

But to the "Kalashnikov" and "tar" is. And one of them - how and according to what scheme will the parts be completed? Where to go 5,45-mm, and where 7,62-mm machines?

And how much will our logistical services be ready for such hemorrhoids? Not even in terms of repair, although here repbats howl. But in case of any damage, you can send to the manufacturer. Although from the Far East - it is still a pleasure in time.

And if we take into account the fact that the mess in our army is not a diagnosis, but a usual condition, then we are sure that dozens of interesting moments are provided to military suppliers.

The narrow specialization of weapons entails a wider specialization for gunsmiths, both in terms of repair and in terms of logistics. Here the question is: how ready are they for such an expansion in the troops? And are you ready at all ...

It is worth noting that our potential is different. And this is despite the fact that the United States can afford everything that they desire in terms of weapons.

Yes, there are some FN SCAR-H exemptions for 7,62 × 51 mm NATO and ACR 6.8 X43 mm Remington SPC, but these are really exceptions. The regiment of US rangers, armed with these monsters, is just a paratrooper regiment, albeit an expanded one. Let us compare it with our SSO, especially since the 75 th regiment in the United States has been assigned the functions of depth reconnaissance.

But otherwise, even the US Army is not able to afford to have two rounds for the main small arms.

How further everything that happens here will look like is very interesting. It is possible that both calibers will normally exist, perhaps, all the same, 7,62 mm will take over.