April 2 2018
23
In social networks and instant messengers there were records from surveillance cameras over the territory adjacent to the Kemerovo shopping and entertainment center "Winter Cherry". So, in the Telegram channel Mash, an entry was published, which testifies to the following facts: fire brigades raised a tower to evacuate people from a burning building almost 1,5 hours after the first call to the 112 number. In this case, the first fire truck arrived at the shopping center in 15 minutes after this call.


From publication on mentioned Telegram channel:

Today, the command of the Rosguard has come up in order to prosecute the employees of the department who were supposed to supervise the protection of the Zimnyaya Chery mall. This was reported by the newspaper. Kommersant. The fact is that according to the ridiculous "tradition", all violations began to be detected after the tragedy. So, after the fire that killed 64 human lives, it was “discovered” that the PSC “Protection Center” did not have a license to work in facilities with a mass gathering of people. The Rosguards believe that the responsible employees could not have been unaware of this.

Today it became known that the head of the TFR, Alexander Bastrykin, rewarded citizens who rescued people in a shopping center.

The list of those who did not remain indifferent:

Alexander Kalachev, an employee of one of the halls of the 3-th floor. Realizing that the people who were on the 4 floor need help, he ran there and led several families out of the fire zone.

Kristina Nikitina, animator of the children's game room, located near the source of fire. She led several children out of the smoke-filled room.

Dmitry Polukhin, 17-year-old cadet of the cadet corps. Carried out of the fire of three children. 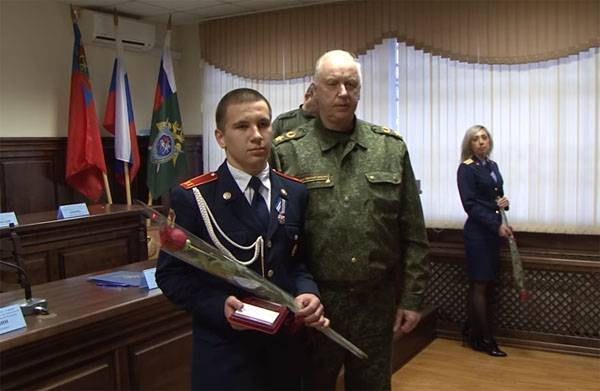 This is not all who assisted during the terrible fire in Kemerovo.

Addressing the awardees, the head of the TFR Alexander Bastrykin thanked them on behalf of the Investigative Committee of Russia, noting:
We often meet people who, at the call of their hearts, do more than those who are obliged to do so on duty. These medals are martial, and they are honored by people who have shown real courage.


The rewarding of those Kemerovo residents, who saved dozens of children in the mall at the cost of their own lives, is also expected.

Ctrl Enter
Noticed oshЫbku Highlight text and press. Ctrl + Enter
We are
The guard of the shopping center "Winter Cherry" in the courtroom presented his version of the reason for the tragedyDay of fire protection. How the fire brigade of Russia was created and strengthened
Military Reviewin Yandex News
Military Reviewin Google News
23 comments
Information
Dear reader, to leave comments on the publication, you must sign in.