April 2 2018
14
For all history The Russian state has repeatedly repeated the situation when some well-wishers appeared somewhere abroad who, ostensibly wanting to alleviate the sufferings of the unfortunate Russians, actively interfered in the internal political life of the country. 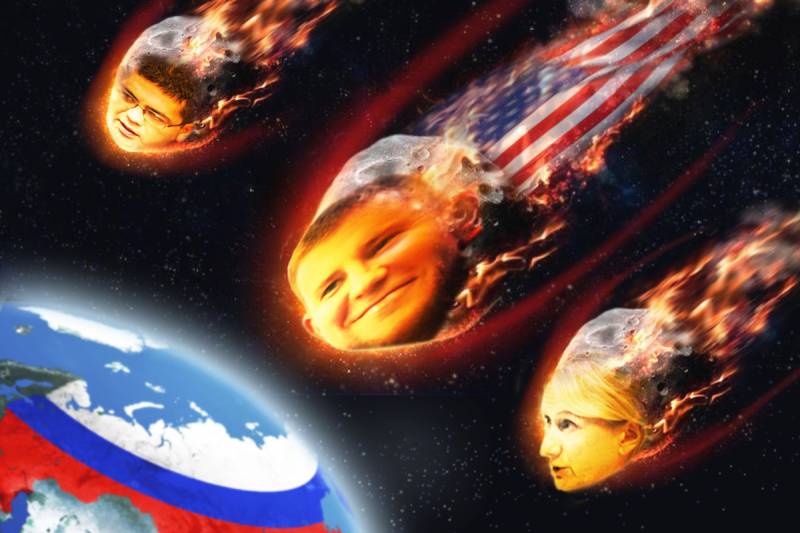 With the same regularity in Russia itself, their sincere followers, who are beginning to actively assist foreigners in the desecration of their own country, are sought.

Many of Russia's best minds, the color of its spirit, have always been very negative and implacable towards such phenomena.

So, Alexander Pushkin in his letter to Peter Vyazemsky 27 of May 1826 wrote in his heart: “Of course, I despise my fatherland from head to toe - but I’m annoyed if a foreigner shares this feeling with me. You, who are not on a leash, how can you stay in Russia? if the king gives me a settlement, then I will not stay a month ... "

The conviction of the great poet was reflected in these lines: if there is something wrong in the Fatherland, only a Russian can criticize his shortcomings, but not a foreigner, but if a Russian citizen does not want to help the Fatherland get rid of ulcers, then the tablecloth is dear to him ...

Already Alexander Sergeyevich it was clear that the foreign criticism of Russia is happening for a reason, and with well-defined goals of weakening the country and introducing unrest in its people.

The situation has become even more complicated with the flourishing of the Internet and social networks: it is enough to throw false information into the worldwide network, and it almost instantly, being repeated many times, immediately becomes the real truth in the minds of millions of people.

This is exactly what happened during the Kemerovo tragedy, when the fake about “many hundreds of dead”, launched from the territory of Ukraine, only the consciousness of the Kemerovo people themselves and the competent reaction (albeit somewhat belated) of the authorities prevented mass unrest that had no relation to the fact of a fire in the commercial center "Winter Cherry".

Now experts have no doubt that the actions of the Ukrainian blogger Volnov, who organized the provocation, were not his initiative, but were managed by the Security Service of Ukraine, which, in turn, is under the complete control of the Central Intelligence Agency.

It is significant that this fake was actually simultaneously supported by Radio Liberty, Voice of America, the Air Force and many other foreign media outlets. And in the same ranks with them were some Russian media, as well as liberal public figures from among the so-called non-systemic opposition.

When mourning for the victims of the Kemerovo tragedy was declared in Russia, one of the activities of the project “Improving the efficiency of journalistic and public investigations in defense of human rights” (from 27 to 30) took place in Novosibirsk March. It was conducted by the Tak-Tak-Tak Foundation, the Commonwealth of Investigative Journalists and the Press Development Institute - Siberia.

According to a report published by Novaya Gazeta - Region (Omsk), “journalists and civil activists from all regions of Western Siberia” were invited to it.

It is indicative that many of the same category of persons whom the organizers of the project wanted to see at their seminar acted as mouthpieces of the above-mentioned fake about “hundreds of victims”.

The following was announced:

“Participation in the project is free. We will be able to pay your travel to the training venue and back and hotel accommodation during events. Trainings will be held in Novosibirsk. Preference will be given to those applicants who have actually tried themselves in a journalistic / public investigation or seriously intend to do it. ”

And the project coordinator was Ilya Kudinov, whose materials are actively published on Radio Liberty under such headings as “Every day the dead were brought here”, “Did not join the agents”, etc.

Among the speakers was Galina Sidorova, the co-founder of the “Commonwealth of Investigative Journalists” (Moscow, Prague), which is often published on the same “Freedom” and acts as an active opponent of the “Kremlin inhuman regime”.

So, what do we have?

And we have the fact that the most infamous Ukrainian provocation against the Kemerovo tragedy was ruled by the SBU, whose actions, in turn, were directed from the CIA, funded from the state budget of the United States. Informational support of the provocation was made by Radio Liberty, which eats from the same source. And at the same time, a seminar was held in Novosibirsk, where the speakers were staff members, even if perhaps non-staff ones of the same “Freedom” ...

I wonder if anyone has any doubts that the Freedom employees who participated in the project did it for free? And where are the sources of considerable funding for the event itself?

By the way, both the Press Development Institute and the Tak-Tak-Tak Foundation were recognized as "foreign agents" in Russia.

Stories are not known facts, when at least one successful investigation would be conducted outside of Russia under the auspices of Radio Liberty or the Commonwealth of Investigative Journalists.

For example, in relation to such facts as the US crimes in Iraq, the financing by the West of the "Islamic state" banned in Russia, the mass executions in the USA or the circumstances of the death of Boris Berezovsky in London ...

But history is well known, as the institution of so-called investigative journalism in Russia often becomes a source of excitement of social or national hatred.

And during the seminar, the journalist of the Novaya Gazeta, Roman Shleinov, spoke about "the advantages of trans-regional (in Russia) and cross-border investigations on the example of the latest works of the International Corruption and Organized Crime Investigation Project." That is, in fact, that Russia is unable to combat these phenomena on its own and that international intervention is required in order to “help” it. If these are not appeals at least for limiting Russian sovereignty in this area, what is it?

Alexey Shlyapuzhnikov, an IT security consultant, enlightened the audience in the digital security field for an “investigator” for several hours and talked about “the specifics of working under conditions of tightening control over the Internet.” Are there any doubts that the participants learned from his words how to publish this or that information and then avoid responsibility for its dissemination?

Svetlana Kuzevanova, media advocate at the Center for the Protection of Media Rights, has been training students for the whole day in the following ways: how, after making the material, to avoid libel charges, who is responsible for disseminating information in the media, on the Internet, and how to avoid responsibility for disseminating information.

At the end of the seminar, of course, the participants were asked to fill out evaluation questionnaires.

Perhaps the organizers of this event sincerely believe that they are carrying the “divine light” to the neglected and barbarous Russian soil ... But don't the participants of this action really understand that they are just pawns in someone else's game? A game aimed at the collapse of Russia?

Interestingly, Alexander Sergeevich Pushkin to say about this?

Ctrl Enter
Noticed oshЫbku Highlight text and press. Ctrl + Enter
We are
On the other side of the “red” and “white”. Izborsk Club ReportPushkin about liberalism
Military Reviewin Yandex News
Military Reviewin Google News
14 comments
Information
Dear reader, to leave comments on the publication, you must sign in.