The remains do not belong to the royal family? About the conclusions of experts

April 2 2018
88
The information about the conclusions made by independent experts after studying the data on the remains of the royal family (the family of Nicholas II Romanov) turned out to be practically unnoticed by large media. These findings were presented in February by a commission composed of Emil Aghajanyan (dentist, vice president of the Dental Association of St. Petersburg, member of the European Association of Aesthetic Dentistry, member of the American Association of Cosmetic Dentistry), as well as historians Leonid Bolotin and Alexey Obolensky.


Examination, as reported edition "Moscow News", was held on the basis of the appeal of the St. Cultural and Educational Fund named after St. Basil the Great. The materials on the treatment of Nicholas II and members of his family and the existing state of the dental-maxillary system of “Yekaterinburg” remains were thoroughly investigated. 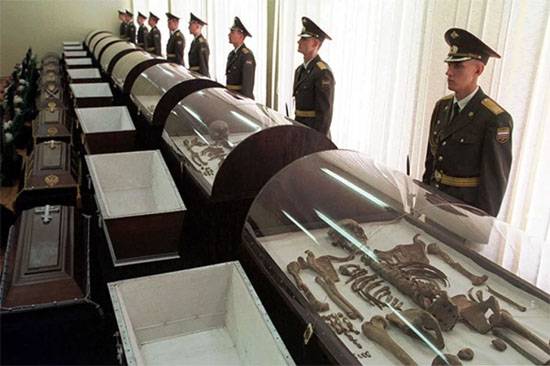 Researchers were asked several questions, including the question of whether there is any evidence that a dentist visited the royal family several months before his death, taking into account the statements of the previous commission about dentophobia (fear of having his teeth treated) by the emperor. The question was born on the basis of the identification of the fact of removal of two teeth - according to the results of the study of the imperial skull, as well as after the specific detection of fillings.

A similar question for the royal family doctor YSBotkin:
Are there any direct or indirect information in historical sources that in April and May 1918, some dentists visited the medical life E.S. Botkin or someone else could have removed his teeth, or any information that teeth No. 44, 36 and 38 were removed during this period from the physician E.S. Botkin? Is it possible, on the basis of the available information, to assert that skull No. 2 from the Yekaterinburg burial belongs to E.S. Botkin?

Another question for the expert group was a question of this nature:
Is it possible, based on the study of the dentition system of the remains found in the Yekaterinburg burial, to assume that Skull No. 7 belongs to Empress Alexander Feodorovna, Skull No. 3 - Grand Duchess Olga Nikolaevna, No. 5 - Grand Duchess Anastasia Nikolaevna, and the way of the Ages ?

From the material of the commission:
Popov’s study (an earlier study) states that the lower right eighth tooth of the skull No. 4 was removed 2 — 3 a month before death, and the lower right sixth was removed long before death. In fact, this does not correspond to the circumstances of the case, as it is clearly seen in X-ray pictures and lower jaw photographs from the materials presented for the study that in fact it was the lower right sixth tooth that was removed after 2 — 3 a month before death, and the right The lower eighth tooth was removed long before death. Also incorrectly stated that a fresh removal is in the area of ​​another tooth. It is actually in the area of ​​the 38 tooth. (...) Only their (errors) simple listing and description of mutually exclusive statements can take a whole page.

The Commission disputes a range of findings from a previous study group. This, in particular, the findings of the provision / failure to provide dental care to the emperor.

Emil Aghajanian's comment for "Reedus":
The first thing that catches your eye is the condition of the dental-maxillary system of the skull No. 4 (which experts attribute to Nicholas II), which is very different from the state of the teeth of the skull No. 7 (which is attributed to Alexandra Feodorovna). The difference is so obvious, and the state of the teeth is so pitiable that the experts tried to endow Nicholas the Second with dentophobia in order to at least somehow explain such a discrepancy. (...) In addition, according to the description of the wounds received during the attempted assassination of Nikolai Aleksandrovich in 1891 in the Japanese city of Otsu, the place of injuries found on the skull no. 4 does not correspond to those in the description of the wounds by the doctors who provided first aid after the attack.

Ctrl Enter
Noticed oshЫbku Highlight text and press. Ctrl + Enter
We are
Evidence of schizophrenia in the case of Colonel Khabarov
Military Reviewin Yandex News
Military Reviewin Google News
88 comments
Information
Dear reader, to leave comments on the publication, you must sign in.