The future of the British surface fleet: City frigates (type 26)

April 2 2018
20
"Type 26", frigates of the type "City" or "Global Combat Ship" (Global Combat Ship, GSC) - the name of a series of promising frigates created for the British Navy. It is planned that the new warships will replace the 13 frigates "Type 23" (known as the type "Duke", from the English Duke - Duke, all the 16 ships of this series were named after the English dukes). It is planned that promising British frigates will be exported. They will be multi-purpose warships for anti-aircraft and anti-submarine defense, as well as for general-purpose operations.


Originally planned to build for the Royal Navy fleet 13 "Global Warships," but later British Prime Minister David Cameron announced that only 8 new frigates would be built. The financing, which was planned to be spent on the construction of another 5 ships of the series, it was decided to direct to the development of a new type of light and cheaper general-purpose frigates. Since new ships will be cheaper, the British government expects that their construction in the future will increase the total number of frigates of the Royal Navy. New light frigates have already received the designation "Type 31".

It is known that promising frigates for the British fleet of the type "City" will be built at the shipyards of the company BAE, located in various parts of Glasgow on the River Clyde. The contract for the production of frigates "Type 26" was announced by BAE Systems 2 Corporation on July 2017. A few weeks later - 20 July 2017, the ceremony of cutting the first sheet of metal for the first ship of the series, called HMS Glasgow. The ceremony was attended by Secretary of Defense Michael Fallon. 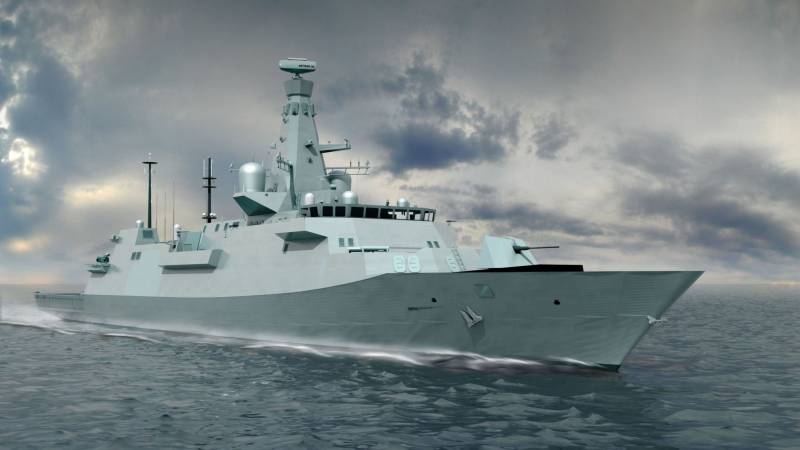 Not so long ago, the lords of the Admiralty decided on the choice of names for a new series of promising frigates: the first three ships would be named Glasgow, Cardiff and Belfast. Already we can say that the ships will be named in honor of the cities of Great Britain, hence another name for the type of data of warships - "City". Already given the names of the first three frigates of the series, the names were traditional for light cruisers of the British fleet. They will become their true successors, taking on their role. Prospective frigates will be multipurpose combat units possessing powerful and diverse weapons, they will be able to act both independently and as part of the formations of the British fleet.

The tasks that the Royal Navy plans to solve at the expense of new frigates are quite extensive. These are fairly large warships with a standard displacement of 6900 tons, it is assumed that the full displacement of ships can reach 8000 tons. In terms of their basic dimensions, the promising frigates "Type 26" are close to other promising British warships - the destroyers "Type 45". The composition of the weapons of new frigates, of course, will be multipurpose ships, with their key destination will be anti-submarine defense. This allows us to consider these frigates as an addition to the promising destroyers "Type 45", which anti-submarine capabilities will be limited.

The power plant of the ship is mixed, it includes a Rolls-Royce MT-30 gas turbine engine, four MTU diesel generators and two electric motors running on the ship's propellers. The maximum travel speed is more than 26 nodes. Sailing range - more than 7000 nautical miles. Autonomy up to 60 days. The crew of the ship consists of 157 people, while on board provided space for 208 crew members. At their disposal will be living quarters, a gym, recreation rooms, a canteen, as well as medical facilities, with the possibility of rendering both ordinary medical aid and emergency aid to the wounded as a result of emergency situations or in combat conditions. 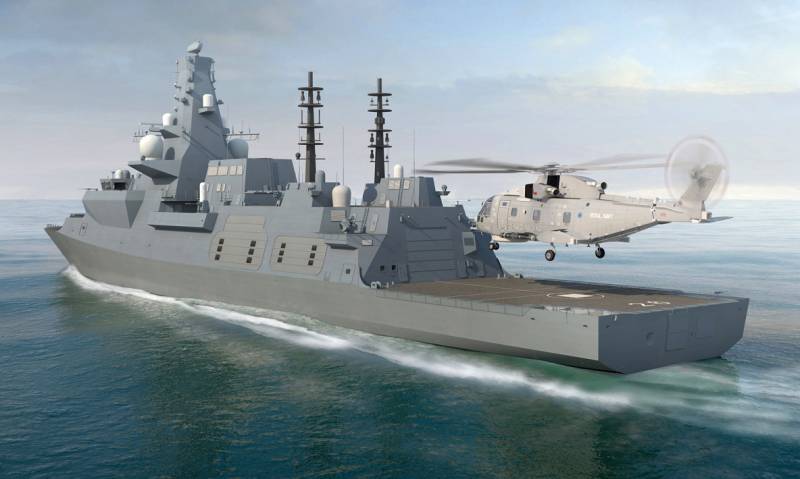 The stern of the frigate will be equipped with equipment intended for launching unmanned boats, rigid hull inflatable boats or towed GUS. The towed sonar system will increase the effectiveness of the ship’s actions against enemy submarines (active and passive detection), and will also solve the problem of warning the crew of a torpedo threat. In addition to the powerful towed GAS on the ship, there will also be an inboard GAS located in the bow bule. In the middle part of the body there is a target load compartment and a covered hangar. An important feature of the project is the presence of the so-called “modular compartment” (target load compartment), various equipment or armaments can be located here depending on the tasks to be solved, in particular, the ability to accommodate standard 10x20 ft (ISO) containers, boats and unmanned vehicles is implemented.

On its large flight deck, the frigate will be able to take a heavy helicopter the size of a military transport Boeing CH-47 Chinook, in the hangar you can place an average helicopter, for example, the medium-sized AgustaWestland Merlin helicopter. Also on board it will be possible to place an unmanned aerial vehicle, which will increase the reconnaissance capabilities of the frigate and targeting capabilities. In the standard version, the frigate air group may consist of one AW-101 “Merlin” anti-submarine helicopter and one AW-159 “Wildcat” multi-purpose helicopter capable of carrying anti-ship missiles and anti-submarine torpedoes.

Of the fundamental armory novelties on the City-class frigates can be distinguished by the appearance of the Sea Ceptor short / medium-range air defense system. It is known that the Royal Navy completed tests of the new Sea Ceptor anti-aircraft missiles at the end of December 2017. The development of missiles of this system is being carried out by MBDA, commissioned by the UK Ministry of Defense as part of the Future Local Area Air Defense System (FLAADS) project. It is reported that the new Common Anti-air Modular Missile (CAMM) anti-aircraft guided missile of this complex will be able to reach speeds of up to 3500 km / h, intercepting various air objects, including supersonic missiles. The initial version provides for the possibility of hitting air targets at a range of up to 25 kilometers, but by the time the first Type 26 frigates are commissioned, new missiles with a target range of more than 40 kilometers should be ready. It is assumed that the ships will have up to 48 cells for the installation of missiles. 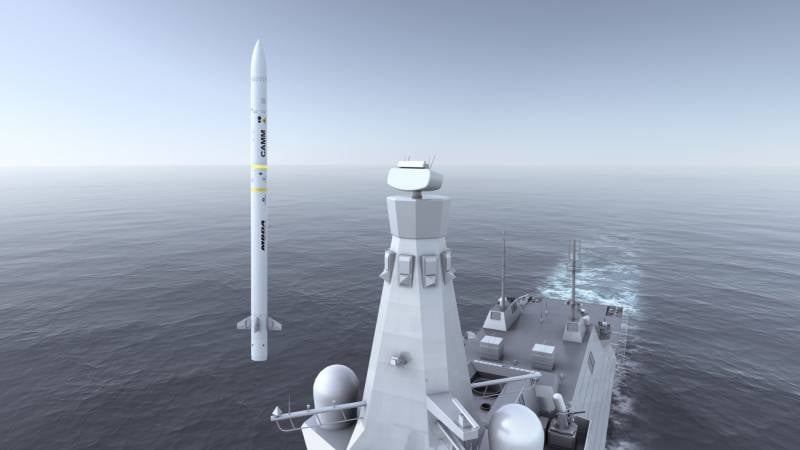 It is also known that frigates will receive American vertical Mk 41 launchers on 24 cells to accommodate various strike weapons. It is possible to use American Tomahawk cruise missiles, ASROC anti-submarine missiles and LRASM prospective anti-ship missiles. Also in them it will be possible to place and missiles of the Sea Ceptor 4 missile complex in the same cell.

The artillery armament of the ship will undergo changes in comparison with other warships of the British fleet. The standard English 114-mm naval gun Mk 8 will be replaced by a new 127-mm universal artillery Mk 45 Mod 4 developed by BAE Systems. This is an 127-mm artillery mount with an 62 barrel caliber and a firing range of 20 nautical miles (36 km). As noted on the website of the company BAE Systems, it can be used and promising smart ammunition. In addition, the artillery armament of the ship will be represented by two automatic 30-mm cannon DS30M Mk 2 and two 20-mm 6-anti-aircraft gun Phalanx CIWS. In addition, the machine guns will be placed on board, which seems useful, given the wide range of tasks of promising frigates: from participating in high-intensity military conflicts to fighting piracy and ensuring safe navigation in dangerous areas of the world's oceans.

Comparing the British project of a promising frigate "Type 26" with Russian developments, it is possible to oppose to it the project of the frigate 22350М, currently under development, which in the future should become the main Russian warship of the distant sea and ocean zone. Their construction is planned to be carried out within the framework of the state armaments program for the 2018-2027 years. They will differ in increased size and displacement (about 8 thousand tons versus 5,4 thousand tons of full displacement at the 22350 frigates), as well as more powerful weapons. The ships will carry up to 80 of various types of missiles, including modern hypersonic anti-ship cruise missiles "Zircon". 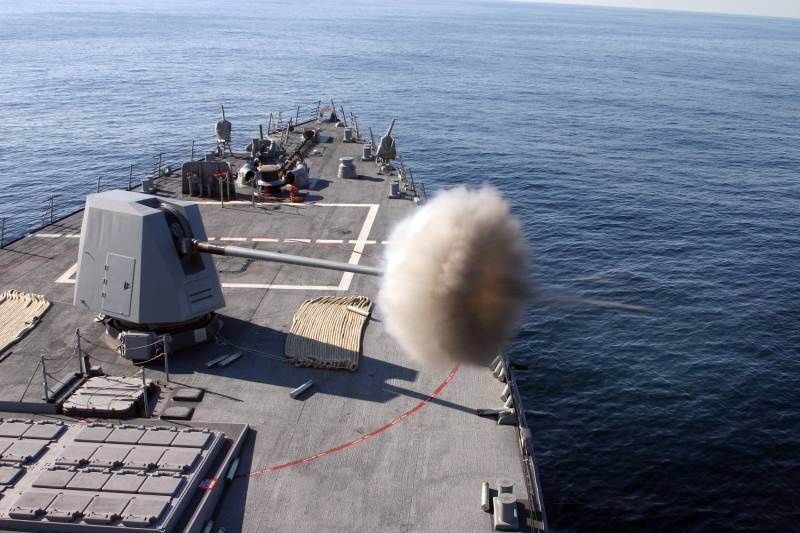 127-mm universal gun mount Mk 45 Mod 4
Experts note that the capabilities of the Royal Navy relative to its main partners or rivals have been continuously reduced throughout the post-war period (meaning the time after the end of World War II). Excluding strategic nuclear forces (which are supported, first of all, thanks to cooperation with Washington), the British Navy’s general-purpose forces in some of its parameters are inferior even to the Italian navy today. The leadership of the British Navy has repeatedly complained about the impossibility of repeating operations like the Falklands War 1982 of the year, if such a need re-emerges. In fact, at present, the royal fleet is relatively small in its strength and capabilities, its combat effectiveness has been greatly reduced by the lack of funding and a fairly large proportion of all finished and malfunctioning ships.

London is going to increase the combat potential of its fleet in several ways. In the first place - due to the commissioning of two new modern large aircraft carriers. Lead shipQueen Elizabeth", Currently undergoing combat training. Achievement of combat readiness is planned to be achieved by 2020, when the ship will receive its air group, consisting of fifth-generation fighter-bombers F-35B Lightning II of American production. It is planned that the Queen Elizabeth aircraft carrier will be focused on conducting “classic” aircraft carrier operations, and the second Prince of Wales aircraft carrier will be used more like a “commando carrier” - a ship for the delivery of special forces and aviation supporting their operations.

At the same time, the main problem of the British Navy is the shortage of warships of the main classes - out of two 6 destroyers and 13 frigates more than two and four ships, respectively, are rarely on alert. It is assumed that it will be possible to rectify the situation in the first case by improving maintenance and modernizing the existing ships, and in the second case by building new generation frigates that will become part of the fleet in 2020-s. It is assumed that in addition to 8 frigates of the “City” type in the future, the British fleet will receive about 10 frigates of several smaller sizes, sharpened primarily in the fight against enemy surface ships. 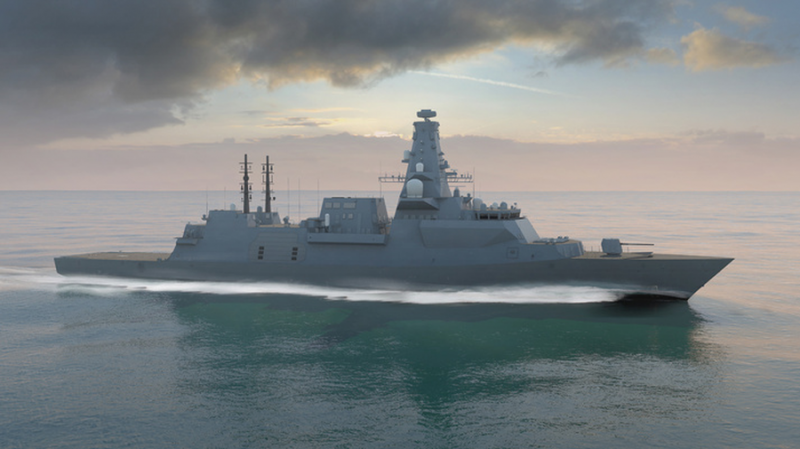 The successful implementation of these plans depends largely on which of the trends in British politics will be stronger. On the one hand, economic problems more than once caused the curtailment of fleet programs aimed at renewing the fleet of vessels, on the other, the “need to confront new challenges,” primarily in the Russian Federation, requires a tangible increase in the country's defense spending. Especially considering the nervous reaction of the British media to any appearance of Russian ships under the flag of St. Andrew’s near the coast of Great Britain.

Much more funding will be needed if Britain wants to return to the Royal Navy the possibility of a "global presence." This, of course, is not about achieving the capabilities of the American fleet, but London will strongly need the ability to project power in different regions of the world - in addition to aircraft carriers, it is necessary to build amphibious ships and supply ships, as well as a sufficiently large number of modern frigates and destroyers. support the main forces of the fleet away from the English shores. In the meantime, the British Navy is mainly capable of solving problems only near its coast, and the country no longer claims the status of "Mistress of the seas" and the "global presence" indicated above. Perhaps the programs being implemented to build new warships will help to change the current state of affairs.