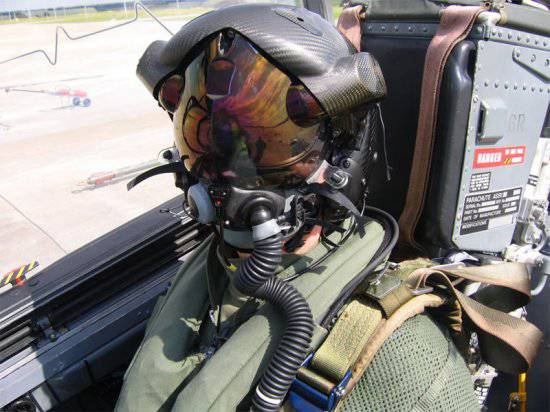 Northrop Grumman Corporation announced the successful testing of a unique Electron-Optical System (EOS) with a distributed aperture AN / AAQ-37 (DAS) for the X-Numx generation F-5 Lightning II Joint Strike Fighter. The system, installed on the aircraft stand, successfully detected the launch and escorted a two-stage rocket at a distance over 35 km. Accompanying the rocket lasted 1200 minutes - from the moment of launch to the moment of fuel burnout.

These figures look incredible and, nevertheless, company representatives say that this is only part of the future capabilities of the aircraft. The EOS DAS F-35 will be capable of an 360-degree view with a high frame refresh rate, high resolution and sensitivity, and all of this will be projected onto the pilot's helmet display.

The system consists of several optical sensors located at different points in the fuselage. A computer combines their images into one seamless picture of the environment. DAS detects and accompanies targets in a completely passive mode (without radar or laser illumination), and does not require pilot intervention. It is necessary for the enemy to appear on the battlefield - DAS will instantly seize the target (ground, air, missiles, including air defense and air-to-air) and will continuously monitor it, eliminating the possibility of leaving in the blind zones. In this case, the pilot can shoot in the rear hemisphere and perform any maneuvers.

Also, this system allows the pilot to literally see through the aircraft’s design in various wavelengths - the computer calculates what the pilot would see if there was no opaque plastic or metal, and transmits the synthesized image to the display. At night, in bright sun, in the fog and rain, the pilot of the F-35 sees an unrealistically clear detailed world. No one has previously received such perception abilities; it is not by chance that this system is called “God's eye”.

The F-35 fighter also installs a high resolution omni-directional infrared CCD-TV camera (EOTS), designed for surveillance and targeting. It provides the capture and tracking of any ground, surface and air targets. Completely passive, it is able to detect and track targets in automatic mode and at a great distance, as well as report on the laser irradiation of an aircraft. To reduce the dimensions and signs of unmasking, the designers abandoned the spherical fairing and closed the camera with faceted sapphire glass.

The complex of such equipment provides the ability to covertly perform a very wide range of tasks: antimissile defense, reconnaissance, support in an irregular conflict, etc.