Gangster reports of Ukraine. ATO militants are attacking ... the French!

April 2 2018
50
French Ambassador Extraordinary and Plenipotentiary to Ukraine Isabelle Dumont has accused Ukraine of creating intolerable conditions for foreign business. Madame Dumont complained to the media that French investors in this country not only suffer from horrendous corruption, but are also being attacked by raiders, and all this is well known to the Ukrainian authorities, who are not taking the necessary countermeasures. 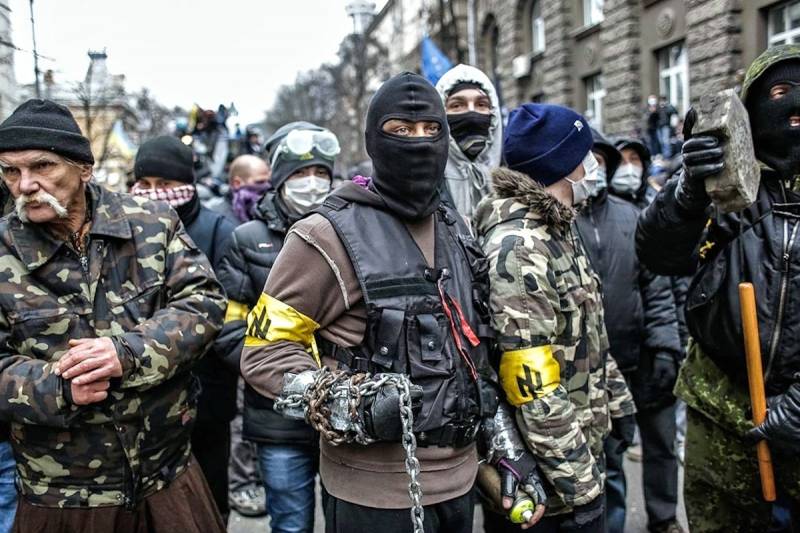 “The Ukrainian government does not even deny their existence. And when such a raid against a company takes place, and the judge takes the side of these raiders, you understand the consequences in terms of trust from foreign investors, ”the French ambassador said.

The speech of the diplomat was actually supported by Ukrainian experts. Almost simultaneously with the speech, Dumont, well-known security specialist Serhiy Shabovta, speaking at the press conference “Week Out: Key Events of Ukraine and the World through the Eyes of Ukrainian Academicians, Economists,” noted the rapid criminalization of the entire Ukrainian society, which “had not even dreamed at the beginning of 90 "x", and the coalescence of organized crime with a corrupt government.
He called another dangerous tendency to attract young people into various illegal processes.

“We easily hide behind the mask of all sorts of youth organizations neo-fascist organizations. In Kiev itself, there is a support base of Azov, about which even the US State Department cautiously speaks and makes very categorical statements, linking them with the delivery programs for us weapons, singling out all this in a separate line, "- quotes the expert" PolitNavigator. "
It should be noted that Sergey Shabvot ticked off, mentioning only the extremist organization Azov, which was banned in Russia. In reality, not only neo-Nazi groups, but also all “veteran” organizations of “ATOshnikov”, and most of the “volunteer” structures, are nothing but “signs” of real organized criminal groups.

Who are busy not only with raiders, but also with racketeering, hostage taking, contract killings, arms and drug trafficking.
A well-known fee in Ukraine has been established for the services of street cyborgs. Thus, the most generously paid for the participation of attackers in raider attacks - up to 100 US dollars per hour. To pogrom-makers - delivering banks, trade missions and overturning stalls pay less - up to fifty "bucks". Even less are the participants of the “blockades” and “quiet” rallies - up to 20 dollars.

These are the fees of ordinary militants - the “Fuhrers”, who take them to actions, and who conclude contracts with customers, receive incomparably more. In addition to “respectable” groups with “official” cover and headed by media characters like Semen Semenchenko, there are also informal “ATO” organized criminal groups, like the group of “like-minded people”, in which the well-known Nazi Vita Zaverukha made raids on the gas station.

It is noteworthy that foreign mercenaries created their "veteran" gangs.
So, in Odessa 17 March, several “veterans” were arrested - Caucasians, headed by the head of the Odessa branch of the “National Corps” Alexander Novoselsky.

Their gang specialized in kidnapping. According to the results of more than 30 searches, law enforcement officers seized an arsenal of weapons and material evidence, and also detained four kidnappers, two more were wanted.
Sergei Shabovta, arguing that the current "nationally svidomye" gangsters have long surpassed in the audacity and cruelty of their "colleagues" from the 90-x, not in the least exaggerated.

If the “brigades” of the past, at least in words, declared their adherence to the “concepts”, then for the former “ATOers” there are no “shores”, they, without hesitation, use all the skills acquired in the Donbass.

So, the other day in Kolomyya, Ivano-Frankivsk region, six local “ATO veterans” took an 14-year-old teenager to the forest for an “educational talk”. Which was carried out in full accordance with the traditions of the punitive operation.
The teenager “under the trunk” was put on his knees, forced to sing “patriotic songs”, and then the letters U and K were carved on the back (which meant “Ukraine”).

The reason for this incident was the conflict of organized crime groups with a teenage gang, which included the victim. The “patriotic” undercurrent of the humiliation to which the unfortunate boy was subjected suggests that the gangsters did not notice changes in their status associated with demobilization and continue to consider themselves “defenders of Ukraine”, and their opponents - “separatists” and “Kremlin agents”. And, accordingly, they introduce into the bandit wars the atmosphere of the “ATOshny” genocide.

By virtue of their “frostbittenness” and combat skills of “veteran” organized criminal groups, they very coolly pressed conventional criminal gangs, which, in turn, also began to attract retired punishers under their banners. As a result, the “traditional” groups already differ little from the “patriotic” ones.

But, most importantly, the leaders of the organized criminal group have long been not satisfied with the role of "contractors", employed. They themselves become participants in the redistribution of property, and already signify distinct political ambitions.

This was confirmed by the seizure of the building of the Nikolaev Regional State Administration by militants of right-wing organizations. They demanded the resignation of the head of the administration Alexei Savchenko and forced the deputies to subscribe to this.

Former Ukrainian Defense Minister Oleksandr Kuzmuk, speaking on the 112 TV channel, said that what happened in Nikolaev represents the greatest threat to the national security of Ukraine, whose power turns out to be completely defenseless against gangs. The general stated that the militants do not need to occupy the Verkhovna Rada and, for example, force the deputies and the government to dissolve themselves.

The oligarchs who have tried to use "Svidomo" militants in their "property disputes" lose control of them, and the former punitive and Nazis, huddled together in gangs, become very dangerous and almost the biggest problem in Ukraine.

Ctrl Enter
Noticed oshЫbku Highlight text and press. Ctrl + Enter
We are
Situational analysis of the death of the MH17 flight (Malaysian Boeing 777), made on the basis of engineering analysis from 15.08.2014Syria: Americans scare themselves, and Asma Asad buys chairs
Military Reviewin Yandex News
Military Reviewin Google News
50 comments
Information
Dear reader, to leave comments on the publication, you must sign in.