April 4 2018
59
The theme of liquid throwing mixtures refers to those topics that arise and disappear again. A discussion of the possibilities of using any liquid that could explode, instead of gunpowder in cartridges and shells, was often unsuccessful. It quickly came to the conclusion that “nothing is impossible” and this was the end of the discussion.


It would seem that you can add to this topic? It turns out you can, and quite a lot. The list of substances and their mixtures, suitable as a liquid propellant, is quite large and there are some very interesting options. But now we will focus on one long-known substance - hydrogen peroxide. 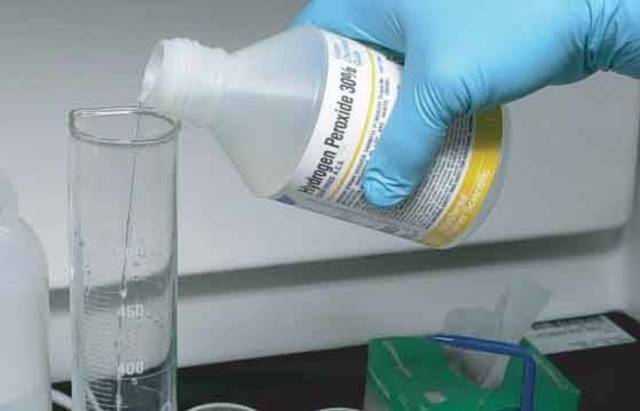 Hydrogen peroxide is a transparent substance that looks like water. In the photo, the 30% peroxide, better known as perhydrol.

Hydrogen peroxide was widely used and is now used in rocket technology. In the famous Aggregat 4, better known as V2 (V-2), hydrogen peroxide was used to drive turbopumps that pump fuel and oxidizer into the combustion chamber. Hydrogen peroxide is used in the same quality in many modern rockets. The same substance is also used for mortar launch of rockets, including in submarine launch systems. Also, the German jet aircraft Me-163 used concentrated hydrogen peroxide (T-Stoff) as an oxidizer.

Chemists were well known for the ability of hydrogen peroxide, especially in high concentration, to decompose instantly, with an explosion and the release of large amounts of water vapor and oxygen heated to high temperatures (the decomposition reaction proceeds with the release of heat). 80% hydrogen peroxide gave a vapor-gas mixture with a temperature of about 500 degrees. A liter of such hydrogen peroxide during decomposition provides, according to various sources, from 5000 to 7000 liters of gas. For comparison, a kilo of gunpowder gives 970 liters of gases.

Such properties completely allow hydrogen peroxide to act as a liquid propellant. If steam and gas from the decomposition of hydrogen peroxide can rotate the turbines and push ballistic missiles out of the launch shaft, then push a bullet or projectile out of the barrel and even more so. This would give major advantages. For example, the possibility of significant miniaturization of the cartridge. However, as is well known to any person versed in stories firearms weapons, hydrogen peroxide was never used as a propellant or even offered. That, of course, had its reasons.

First, hydrogen peroxide, especially concentrated, instantly decomposes with an explosion when it comes into contact with most metals: iron, copper, lead, zinc, nickel, chromium, manganese. Therefore, any contact with a bullet or a sleeve is impossible. For example, an attempt to pour hydrogen peroxide into the sleeve would have led to an explosion. Safe storage of hydrogen peroxide at the time of birth and the most rapid development of cartridge technology was possible only in glass vessels, which put insurmountable technological barriers.

Secondly, hydrogen peroxide even in the absence of catalysts slowly decomposes, turning into water. The average decomposition rate of a substance is of the order of 1% per month, so that the shelf life of hermetically packed hydrogen peroxide solutions does not exceed two years. For ammunition it was not too convenient; they could not be made and put for decades into the warehouse, like ordinary cartridges.

The use of a new propellant, such as hydrogen peroxide, would require such a major change in the production, storage and use of firearms and ammunition, that they did not even dare to undertake such experiments.

However, why not try? In favor of hydrogen peroxide, you can make some very weighty arguments, however, a few unusual properties, to a greater degree of military-economic. If the arguments are best considered together with the proposed design of the cartridge with a charge of hydrogen peroxide, so as not to be repeated twice.

The first. Hydrogen peroxide (and some mixtures based on it) is a propellant manufactured entirely without the participation of nitric acid, this indispensable reagent for the production of all types of powders and explosives used. In a military economy, mastering the production of at least some missile or explosives without using nitric acid, means the possibility of increasing the production of ammunition. In addition, as the experience of Germany in World War II shows, all nitric acid and all ammonium nitrate (used in Germany as explosives and as a component of gunpowder) cannot be put on ammunition alone. Something else must be left for agriculture, for bread is no less important for war than gunpowder and explosives. 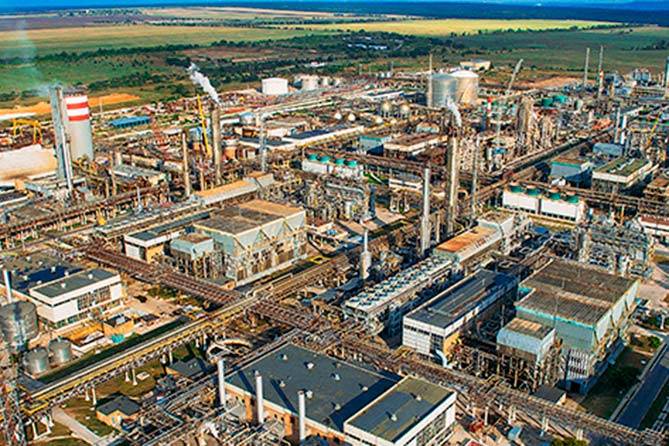 And the production of nitrogen compounds is huge factories that are vulnerable to aviation or rocket strike. In the photo - Togliattiazot, Russia's largest producer of ammonia. 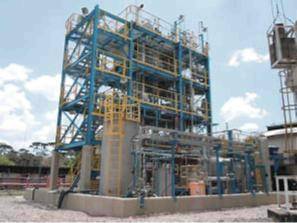 Here is an example of the installation for the production of hydrogen peroxide company "Solvay" with capacity up to 15 thousand tons per year. A relatively compact installation that can be hidden in a bunker or some other underground shelter.

Concentrated hydrogen peroxide is quite dangerous, but rocket engineers have long developed an explosion-proof mixture under normal conditions, consisting of a 50% aqueous solution of hydrogen peroxide with the addition of 8% ethanol. It decomposes only with the addition of a catalyst, and gives a vapor-gas of higher temperature - up to 800 degrees, with the corresponding pressure.

The second. Apparently, to equip the cartridge of hydrogen peroxide will require much less than gunpowder. It can be assumed for approximate calculations that this substance produces on average 4 times more gases than gunpowder, that is, to obtain the same volume of gases, the volume of hydrogen peroxide of the entire 25% of the volume of gunpowder is required. This is a very conservative estimate, since I could not find more accurate data, and the data available in the literature are very different. Until more accurate calculations and tests it is better not to get involved.

Take the cartridge 9x19 Luger. The internal volume of the liner occupied by the powder is 0,57 cube. cm (calculated by geometric dimensions).

But here it should be noted that with the diameter of the cartridge in 9 mm, the volume for the propellant charge in the 0,14 cube. cm requires a height of just 2,1 mm. And the question arises: do we really need a sleeve here? The length of the bullet in this cartridge is 15,5 mm. If the bullet is increased in length by 3-4 mm, the cavity for the propellant charge is made from the back side, then it is possible to refuse the sleeve as such. The ballistic characteristics of the bullet, of course, will change, but hardly drastically.

No need to say how important it is to reduce the weight of ammunition and reduce their size. Such a radical reduction in the size of the same pistol cartridge, that it shrinks, in fact, to the size of a slightly increased bullet, creates great prospects for the development of weapons. Reducing the cartridge in size and weight almost doubles means the possibility of increasing the store. For example, PP 2000 instead of stores on 20 and 44 cartridge can get shops on 40 and 80 cartridges. The same can be said not only about the cartridge 9х19, but also about all other cartridges for small arms. 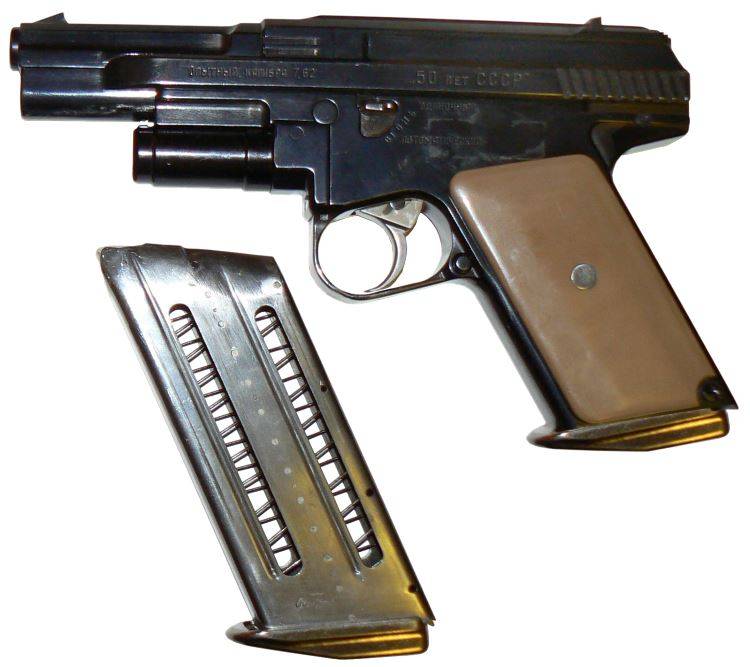 You can also recall about the gun VAH-73 V.A. Gerasimov under the caseless cartridges.

Third. Modern storage tanks for hydrogen peroxide and mixtures based on it are made of polymers: polystyrene, polyethylene, polyvinyl chloride. These materials not only provide safe storage, but also make it possible to make a capsule for ammunition equipment inserted into the bullet cavity. The capsule is tight, supplied with a capsule. Primer in this case, the concept of conditional. Hydrogen peroxide does not need to ignite, like gunpowder, but you need to add a very small amount of catalyst. Essentially, the capsule in this case is a small nest in a plastic capsule with a propellant, where the catalyst is placed. The impact of the striker pierces this nest, its bottom, separating it from the propellant, and pressing the catalyst into the capsule. Further, decomposition of hydrogen peroxide, rapid release of vapor gas and a shot occurs.

The capsule is best made from polystyrene. It is quite durable under normal conditions, but when strongly heated, above 300 degrees, it decomposes into a monomer — styrene, which, in turn, mixed with oxygen present in the vapor-gas, burns well and even explodes. So the capsule will just disappear at the moment of the shot. 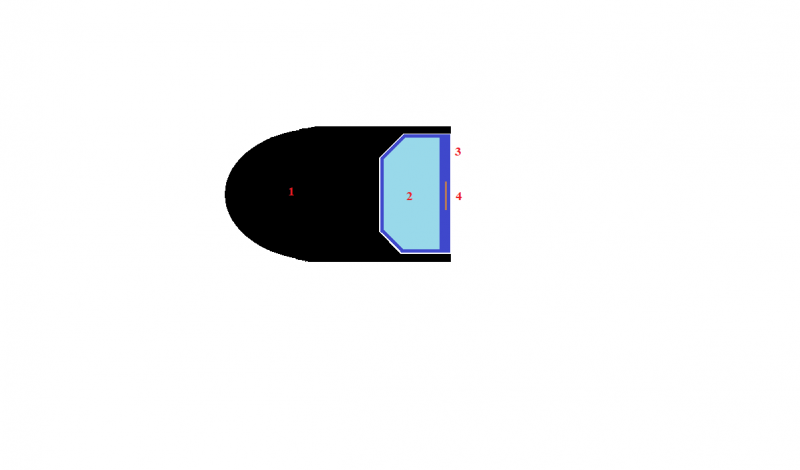 The polystyrene capsule is made incomparably easier and simpler than the liner. It is easy to stamp on a thermopress with hundreds and thousands of pieces in one pass. Numerous (more than a hundred!) Operations for the manufacture of a metal sleeve completely disappear, the technological equipment for the production of a shot is greatly simplified. The relative simplicity of production is the possibility of mass production and its expansion, if necessary.

However, it should be noted that the cartridges equipped with hydrogen peroxide, you will need to make immediately before use, with a maximum shelf life in the month 3-4. The more such a cartridge is stored, the more difficult it is to vouch for the fact that it will work. But this circumstance can be circumvented in the following simple way: equip with fresh hydrogen peroxide or a mixture based on it only those batches of cartridges that will immediately go into action. It will be necessary to change the order in which the ammunition is manufactured. If in ordinary cartridge production the cartridge is loaded with gunpowder before the bullet is mounted, then in the case of hydrogen peroxide, the final stage of the manufacture of the ammunition will consist in pouring it into the already assembled ammunition. Hydrogen peroxide can be poured inside a capsule already installed in a bullet using a thin needle (aluminum or stainless steel - materials that are acceptable for working with this substance), followed by sealing the hole.

Therefore, in peacetime, it is possible to procure a sufficient mobilization reserve of “dry” cartridges in order to quickly start the production of fresh hydrogen peroxide and accelerated equipment of these blanks in the event of war.

However, some of these cartridges can be kept in warehouses and fully equipped. After the expiration date, hydrogen peroxide can be replaced in them without disassembling the ammunition: with a thin needle, first pump out the already-worthy throwing mixture, and then pour fresh.

In general, if you decide on major changes associated with the design of the cartridge, the design of weapons, as well as the technology of cartridge production, you can enter a new throwing substance and get a number of military-economic and tactical advantages associated with its use. These advantages, as can be seen, will be very far-reaching and will affect all aspects of preparation for war.