April 2 2018
69
The Second Boer War broke out in the 1899 year (unofficially much earlier), in spite of all the peace efforts of the Boers. The cause of the British aggression was supposedly the “struggle for the observance of human rights” - nothing changes. The fact is that shortly after independence, the African republics discovered gold in the Boer lands. This is in the treasury of already found diamonds, the extraction of which got hold of Cecil Rhodes, setting Britain against the Boers, who interfered with his diamond empire and plans for total domination on the continent. In general, the gold rush began. Crowds of foreigners, mostly British, rushed into the country. The greedy miners did not understand the African land, nor the Boers, nor their concerns about ennobling these alien alien places.


One of the Russian volunteers of the Boer Army, Vladimir Rubanov (a former St. Petersburg student), described the Boers as unsophisticated and non-business, but hardworking people. Moreover, he shared their aversion to the “oytländer” (i.e., to the lovers of quick money who flew to the gold rush). Here is what he wrote about the “new” Europeans in Pretoria: “These are the dregs of European society, the renegades, deprived of all principles and spiritual interests, greedy seekers of gold, sucking everything they can out of the country”. 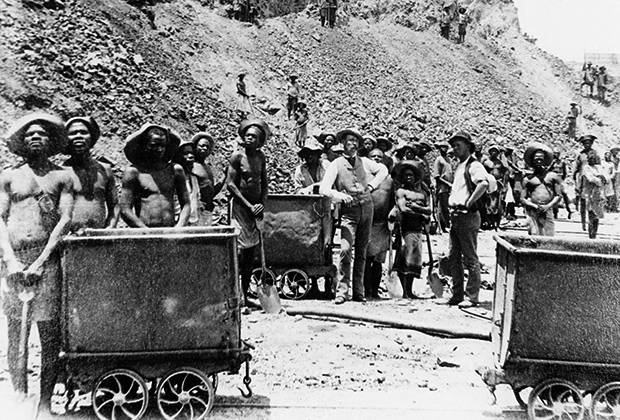 British politics in Africa was exactly like these greedy tatters, thirsting for wealth. The Crown also thirsted for wealth and control over lands that it did not even master, which were explored by the Boers. The British demanded that the Outlanders be granted the same rights as the citizens of the Boer republics. At the same time, the British promised the miners all kinds of swag and, having received their full support, they would have easily eliminated the independence of the republics. That is, as a result, on a completely “legal” basis, the British Crown received land and deposits, as well as a crowd of “its voters” incapable of self-organization, and therefore not dangerous. The question of the Boers who remained on the lands, who after the “invasion” of the Outlanders turned into a national minority, was resolved with the satanic elegance of Aloizovich.

For a start, the Bantu peoples were attacked by the Boers. Thanks to the incitement of the British representatives and the influence of the magnate Rhodes, the Zulus, Ndebele and other tribes regularly flew to the Boer settlements, depleting them and not allowing them to develop state institutions. By the way, Rhodes, a clever manipulator, was the creator of the apartheid system, openly declaring the primacy of the Anglo-Saxon race over all others. The Boers had nothing to do with the creation of apartheid. 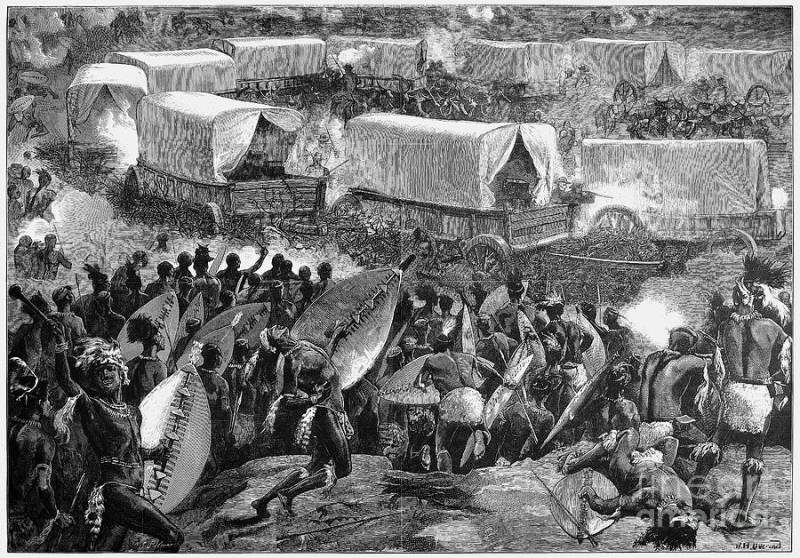 Zulu attack on the Boers

In addition, even before the war, the British press launched a campaign against not only the politicians of the African republics and their leaders, but also the people themselves. On the surface, it would be appropriate to write “unprecedented persecution,” but it is impossible for the Russian people to know that it is completely traditional. The newspapers of foggy Albion described the Boers as a half-ghost, stupid and disorderly creature. To emphasize their “animal” origin in the press, population figures were often distorted with a hint of the reproduction rate of rabbits, as well as a refrain of mentioning mixed marriages. As if this was not enough, the British already connected large-caliber artillery - Arthur Conan Doyle, while the old man was not yet sir.

Officially, Conan Doyle participated in the second Boer War as a field surgeon. I don’t know how often he operated there, but already in the 1900 year, i.e. a year after the start of the war, the book “Anglo-Boer War” was published in London for its authorship. In the original, it sounds emphasized tendentiously and pathetically - "The Great Boer War." The book, in fact, is woven from messages of the British press.

Already 8 September 1900, Conan Doyle left South Africa. In Britain, he was licked by the authorities, and it was for this agitation that he was elevated to a knighthood, and not for the Sherlock Holmes cycle. But since the war was oh so far from complete, inspired by such subservience of compatriots, Arthur finished his “fundamental” work, scrolling through English newspapers. Uncle was far from being timid in his actions, however cynical they might seem. For example, Cecil Rhodes, a politicating manipulator, magnate, author of apartheid, and a man partly responsible for the death of thousands of white and black Africans at the hands of his punitive detachments — Arthur Conan Doyle called the "messenger of the heavens." 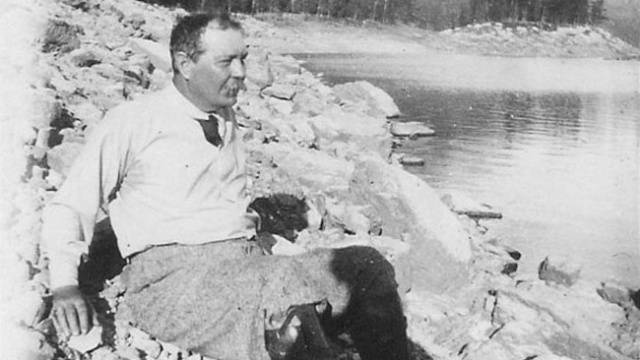 Strongly beat the development of African republics and all sorts of economic sanctions before the war. In their memoirs, our volunteers wrote about the fantastic price level in the Transvaal and the Orange state. This naturally affected the supply of the army in the run-up to and during the conduct of the war. Evgeny Augustus wrote, remembering how he was put on allowance in the Boer army in Pretoria: “Immediately in one of the rooms of the ministry were old rifles of the single-shot system Henry-Martini (modified by Peabody-Martini) without bayonets, cartridges, saddles, bridles and stirrups ... Officials came to despair, explaining to the disgruntled that the Mauser rifles are no longer there, that the old saddles (REM. Autonomy - according to other evidence, such saddles were falling apart after the 3-day ride) and the bridles are given out for lack of new ones, whose stocks have been exhausted. I realized that on the road I wouldn’t need a quick-rifle or a new saddle, but on the battlefield I would be able to get both. ” 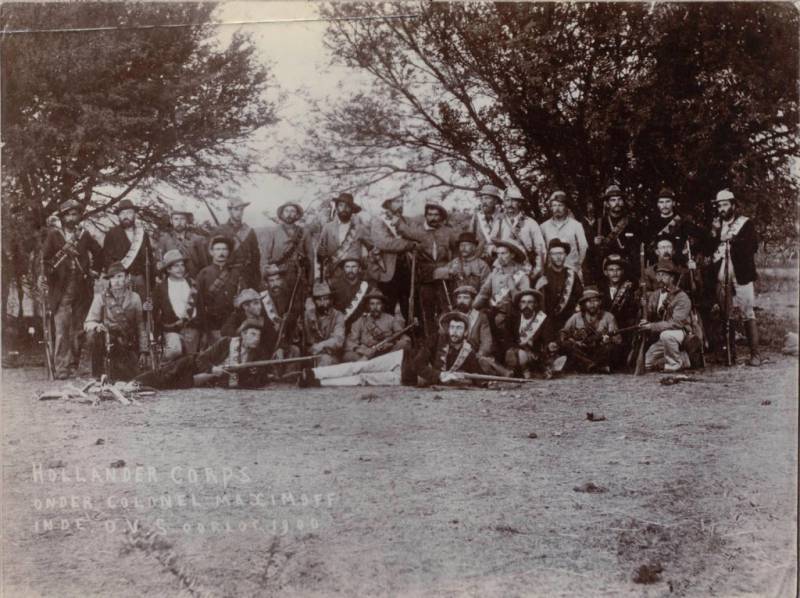 In addition, partly due to the powerful expansion of Britain and Cecil Rhodes, partly due to the patriarchal nature, slowness and deeply agricultural way of life of the Boers, there was a catastrophic lack of industrialists, bureaucrats and managers with specialized education. Schools to build was either no time or no one. This industrial and profile backwardness will hit the drills with a sledgehammer already on the battlefield.

Those. even before the outbreak of hostilities, the Boer question, as I have already outlined, was resolved. A unique white African subethnos must be subjected to either "cultural" extermination, or direct physical. British civilizers suit any turn of events.

The first hostilities, which with a little stretch of the ranks to the second Boer War, was the so-called Jameson raid. In my humble opinion, a typical attempt at a “color revolution.” The raid plan personally developed the notorious Rhodes. 29 December 1895, a detachment of half a thousand fighters, including cavalry (a kind of light cavalry), armed with rifles, Hiram Maxim machine guns and light guns, crossed the Transvaal border with the British protectorate Bechuanandend. The plan was that by the time the detachment arrived in Pretoria, the Outlander riot was to begin. For Rhodes' money, they were thrown into a couple of puppet political parties in advance. And the people of the English official, Linder Jameson, were to be the answer to the “call of the people, who were languishing under the rule of the Boers”. 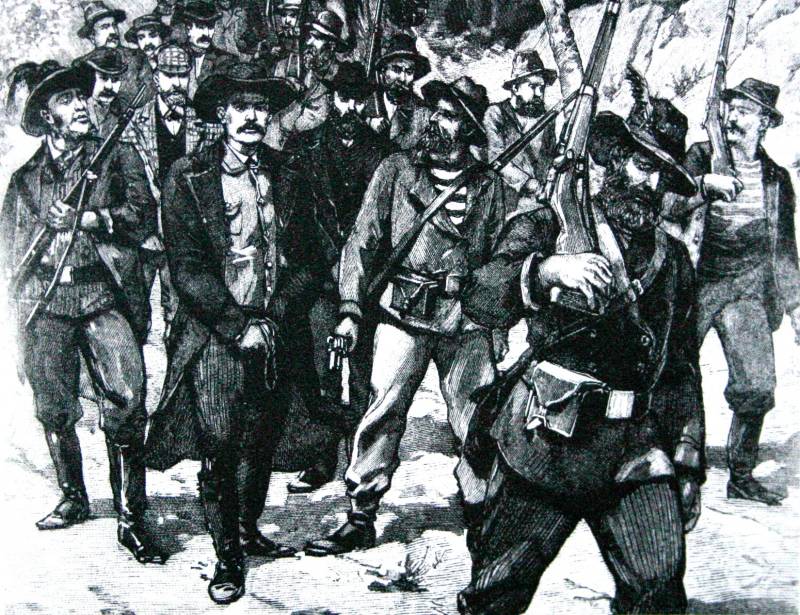 Capture of Linder Jameson and his squad

However, while Jameson flew like mad to the rescue of a previously prepared “people,” this same “people” managed to gnaw inside themselves for the future, only the expected buns. Thus, it was impossible to start a scream in the press about the oppressed “European workers” due to the lack of outrage among these “workers”, perhaps with each other. In such conditions, the Jameson squad from “fighters for freedom and human rights” turned into a regular, albeit large and well-armed, gang.

Already on January 2, the Boers, well aware of the squad’s plans and the failure of the conspirators in Pretoria, found the people of Jameson. Once surrounded, the failed "revolutionaries" started a battle. Despite good weapons, the Jameson squad soon lost many dead and wounded and was forced to surrender.

In Pretoria, prisoners were treated indulgently and sent home. Thus, the then leadership of the Transvaal republic and its president Paul Kruger (known as “Uncle Paul”, in 1941, in Germany, the same-name film about the president’s life even came out) tried to win the sympathies of the pro-British population, and also, as they say, the world community. At the same time as a result of a failed operation, the reputation of Britain was thoroughly omitted. If the wild boers, as the British press squealed about them, were able to give British notably armed "patriots" to the British snot, what would happen if the Boers collected a full-blooded army? 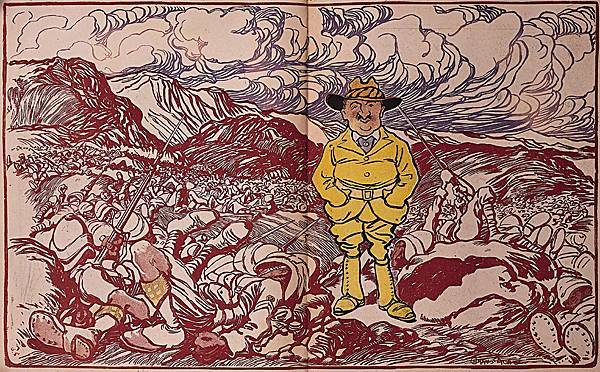 True, most leather chairs were heated under the buttocks of the London establishment. But even in Pretoria, in spite of their patriarchal contemplation, they understood perfectly well that they would not leave them alone, and they essentially became witnesses of the beginning of the war. She just needed to be pulled off with all her strength and begin emergency training. In 1897, the Transvaal and the Orange state conclude an alliance.

By 1899, the situation has passed all permissible limits. No political concessions of the Boers in the hope of postponing the war were already uninteresting to London. On August 19, President Kruger even agreed to grant suffrage to all Outlanders who had lived in the Transvaal for more than 5 years in exchange for refusing to interfere in the internal affairs of the republic. In fact, almost from the very beginning, all this was London indifferent to the word at all. The waves of the Atlantic have already cut the British transports with the troops, and already arrived, they went out on the march towards the border with Transvaal. Well, not for the sake of the profit of some prospector and miner punks, everything was started ...

October 9 Transvaal in the ultimatum form demanded to withdraw the troops from the border. October 11 war began. The Boers quickly figured out that it was no reason to beware of the industrial empire and its regular army. The only chance was considered a lightning raid on the territory of the British colonies and protectorates in order to break the British troops who had time to land, using the element of surprise. The Boers hoped that the London hogs would calculate what time the dream of Transvaal gold and diamonds would become, the risks of loss, at least for a while, of the existing colonies and protectorates, as well as international reaction and their own prestige. Summing it all up, in the case of the Boer luck, London could well go on a world with mutual concessions in order not to lose face. Naturally, the world is temporary, but the world.

Ctrl Enter
Noticed oshЫbku Highlight text and press. Ctrl + Enter
We are
Is “Maidan” possible in South Africa? Who and why not like President ZumaReports from the militia of New Russia for 27-28 September 2014 of the year
Military Reviewin Yandex News
Military Reviewin Google News
69 comments
Information
Dear reader, to leave comments on the publication, you must sign in.