Modern shells with the beginnings of intelligence

April 2 2018
11
The simplest fragmentation projectiles methods only to natural fragmentation, that is, the random dispersion of fragments under the action of a blasting explosive. Such shells will still be present in the arsenals of the warring parties for a very long time, but the demands of the time and the tastes of customers require new, more effective ways to eliminate the enemy on the battlefield.


Fragment ammunition with shells of a given crushing is a certain and quite confident competition, but in this material we omit the details, since this topic is a separate article.

The first in the innovative range of "smart" are fragmentation ammunition with ready-made striking elements that provide stable characteristics of the fragmentation field. Often, simple balls are used as ready-made killer elements - this, for example, is implemented in hand grenades and aerial bombs that are not constructively adapted to capital impact overloads. In the German M-DN21 with a total mass of grenades in 221 grams, there is inside 2200 balls, each mass 0,45 gram. Back in the middle of the last century, researchers proved that the most efficiently acting both in the living and in the material part is a fragment of 0,5 g with a specific kinetic energy of about 100 J / cm2. It is difficult to imagine the difficulties that doctors will encounter in the treatment of multiple shrapnel wounds from such ammunition. It is worth noting that the classic projectile gives under the order of 77% of fragments in the 0,1-1,0 g mass range, the vast majority of which do not reach 0,5. The second World medical statistics indicating 0,5 mass fragments was another argument in favor of the finished damage elements. g and less as the most “slaughter” fraction of damaging elements - 66,6% of all injuries accounted for just such fragments. Fragments of more than 10 g due to their rarity caused injuries only in 6,7% of cases. The second variant of fragmentation ammunition with ready slaughter elements is to equip them with a carrying metal sheath that protects against shock overloads in the gun barrel. The reverse side of such a solution is the fragments of the supporting structure with noticeably worse characteristics than the finished striking elements. This is an experimental howitzer projectile caliber 105 mm ХМ0125, containing 7800 tungsten balls and 2 kg BB. The German 76-mm projectile DM261A2 for the ship's automatic cannon containing 2200 balls with a diameter of 4 mm and 580 g BB is also a class of fragmentation ammunition with a carrying shell. Balls as killer elements are also not sinless - the substance binding them (usually epoxy glue) when explosives are detonated is quickly “blown out” by the hot products of the explosion, which naturally reduces the kinetic energy of the finished fragments.

To prevent gas breakthrough, engineers suggested installing a thin shell (liner) between explosives and balls, or simply giving the elements the shape of hexagonal prisms minimizing the gaps between deadly pieces of metal. 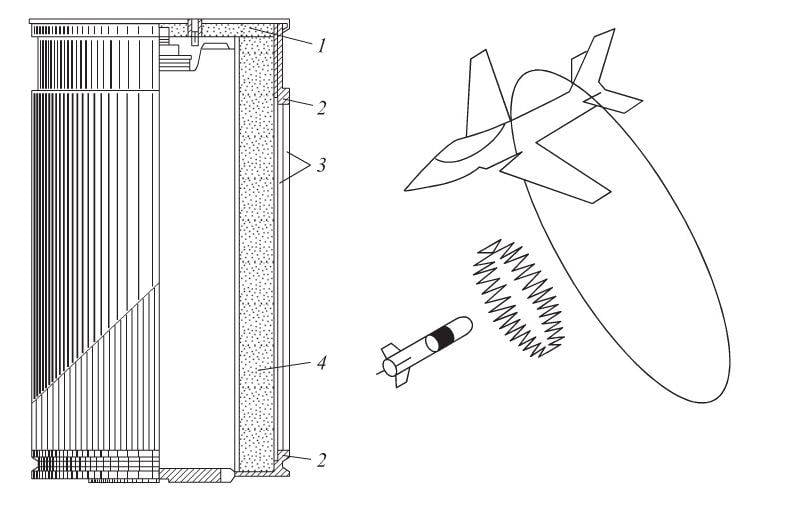 A separate phenomenon look ready attack elements of missiles, representing steel rods of round or square cross section, laid on top of the explosive charge and isolated from its destructive action by the damper. Engineers have provided two options - alternately welded upper and lower ends of the rods, which during the explosion form a solid ring, that is, a huge single damaging element, and separately laid rods that form a circular flow of individual elements. The goal is to trim the aircraft, which the rods cut like butter, destroying the power elements of the structure - for example, the 9М333 self-propelled air defense complex Strela-10 operates. In the 2C6 “Tungusk” complex, the 9М311 rocket has a combined warhead, 9 kg mass, composed of 600 mm rods and cubic fragmentation elements weighing from 2 to 3.

To hit targets in the upper atmosphere or outside, fragmentation munitions are being developed, which form, when undermined, narrow circular fields of fragments with low speed. A sort of “network” is created for an approaching object, in which the density of the fragments is high enough to guarantee damage. The goal usually has strategic status and has hypersonic speed, so the striking elements do not need serious acceleration to impart kinetic energy. The apotheosis of engineering becomes prospective cluster fragmentation fields, which are steel grids (fields) or folding grids deployed by antimissiles on the way of an approaching ballistic one. For example, Lockheed-Martin developed an orbital interceptor with a hard (coupled) field as part of the HOE (Homing Overlay Experiment) program. The length of the telescopic pen interceptor 2 050 mm, on each pen is five heavy ready-made striking elements. They also propose to integrate into the shell of such an obstacle an additional explosive charge, which is triggered when interacting with the target. 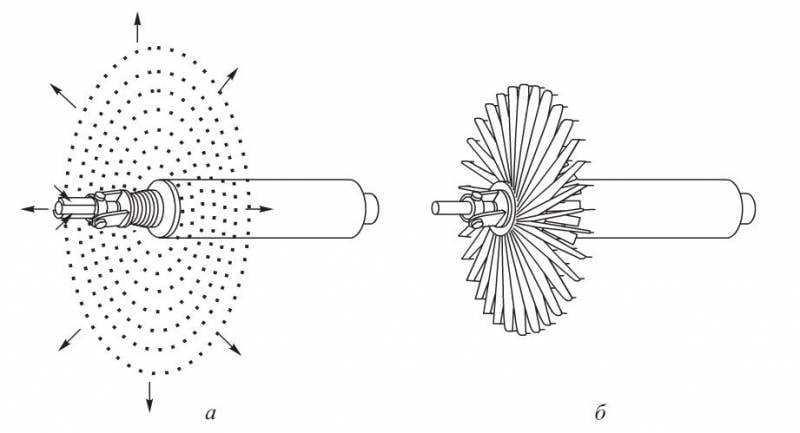 The circular distribution of fragments has one significant minus - at small angles of approach to the target, part of the damaging elements goes into the ground without causing significant harm. Therefore, the next step of smarter fragmentation ammunition is to turn it up to the vertical axis just before the detonation. The domestic 122 mm cassette of the Prima MLRS used a parachute to go vertical, however, this required sufficient time and opening height. High-speed shells for instant turnaround are equipped with jet engines or discarded powder charges of ballast masses. Promising design of a feathered fragmentation shell to tank The D-81 cannon provides a remote fuse for the expelling powder charge. Together with the sensor of the angular position of the projectile, the "brains" of the projectile instruct the gunpowder to explode at a certain moment and throw two cargoes with a total mass of 200 kg at a speed of 1,2 m / s, which provides an impulse of 240 N · s. As a result, the projectile becomes deployed 90 degrees in 15 meters and detonates. The circular fragmentation field is evenly “distributed” over the enemy ... 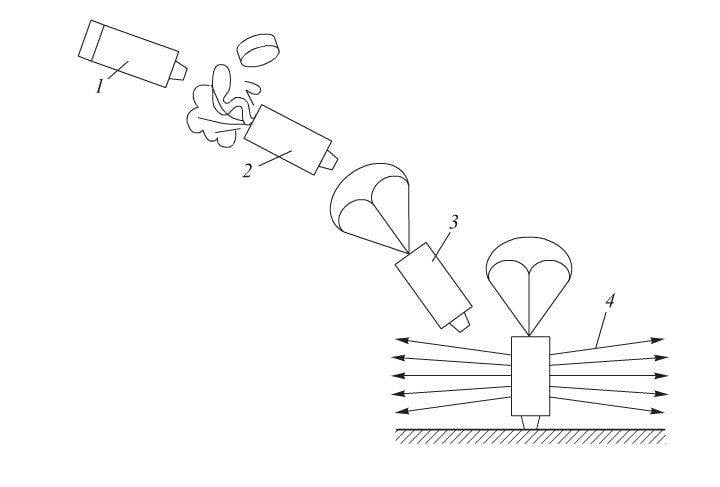 Fragmentation-shells are a relatively new trend in artillery tank systems, implemented in Russia in the Ainet system for the T-90C. The range finder, ballistic computer and automatic time (trajectory) fuse installer 3ВМ18 provide inductive input of blasting parameters just before the projectile is fed into the barrel. Ready-made attack elements - usually miniature cylinders - are located in the nose of the projectile, are separated from the explosives dampers and provide a directional flow of debris or “beam”. 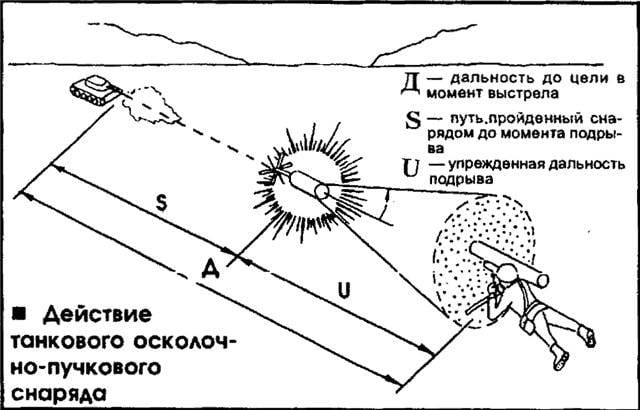 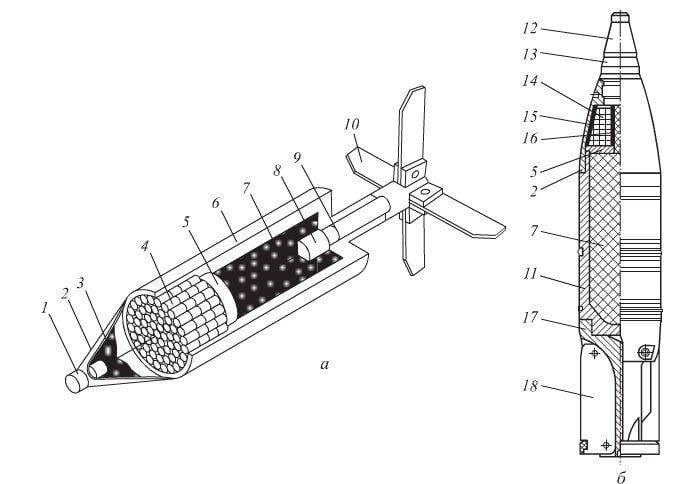 It is important that to the speed of the flight of the directed splinters the projectile's own speed is plus, which ensures high kinetic energy of the slaughter elements. The carrier body of the projectile in detonation forms a secondary circular field of fragments, allowing more efficient use of material projectile. In the future, all high-explosive fragmentation shells will be replaced by fragmentation-beam shells, especially as the potential enemy is already using them. In Israel, this is M329 Apam from 2009 of the year, which is capable of making six consecutive explosions on the trajectory, which leaves no chance of a tank-dangerous force in the narrow city streets. The German DM11 projectile with a three-mode fuse from the Rheinmetall armory atelier has tungsten balls as the striking elements.

A DM11 projectile with a supersonic head needle. Source: andrei-bt.livejournal.com.

From the classic cumulative and high-explosive fragmentation shells, the new design borrowed a nasal supersonic needle, which forms the Mach cone in flight and is responsible for stabilizing the projectile on the trajectory. Swedes from the firm FFV experiment with a combined projectile "P", belonging to the new class of cluster frag-beam shells. In the case of ammunition there are two missile blocks with expelling powder charges. Approaching the target, the automatics successively shoot blocks from the projectile, which, in their turn, explode, hurling the striking elements. Such a multi-stage attack mechanics tells steel 25-gram balls a speed of the order of 1600 m / s, which guarantees the penetration of the tank's roof to a thickness of 40 mm.

Rather exotic look meniscus or multielement fragmentation ammunition of a given crushing. The highlight of the design is the shell of the projectile, treated with high pressure with the formation of shallow grooves in the form of meniscuses or cones with large angles of solution. Got an elegant idea from the engineers? When explosives explode, miniature “shock cores” are formed, sweeping at a speed of 1800-2200 m / s and penetrating armored obstacles with a thickness of up to one meniscus diameter. Reducing the angle of the solution to 70-90 degrees modifies the compact “shock core” to a cumulative jet, and the ammunition itself is called multi-cumulative. To the category of rare can be attributed to the finished striking elements of improved aerodynamic shape, that is, arrow-shaped with plumage and asymmetrical flat. They fly far, have a high lateral load and are very effective in protected manpower. However, the challenge remains the problem of intact throwing from high shock loads during the detonation of explosives - the damaging elements are destroyed and deformed. Therefore, aerodynamic elements are thrown carefully, using a powder charge and at a speed of no more than 200 m / s.