The war of extermination. H. 2 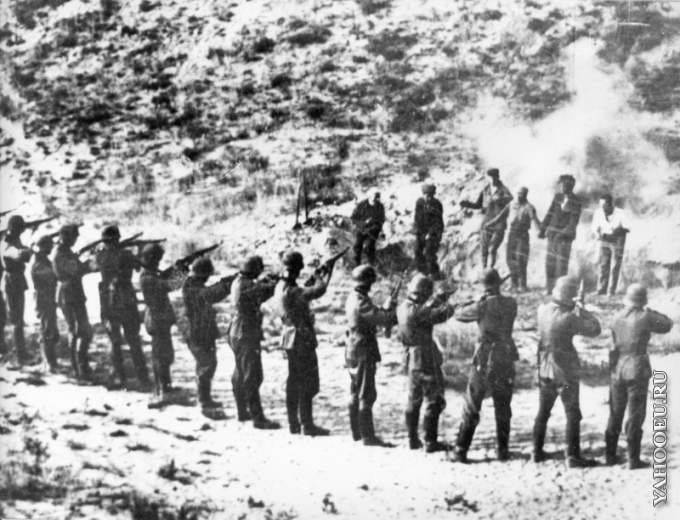 Continuing the theme raised in the article War of extermination, it must be said that the atrocities of the Nazis on Soviet soil have no analogues. In the western countries, France, Belgium, Norway, Denmark, Greece and even Poland, the invaders for a very long time behaved like people who honor international laws and customs of war. Even during the seizure of these countries, there were generally few excesses: the command, officers, and each soldier were handed a memo with the “Ten Commandments of Warfare”, which spoke about the need for a loyal attitude to the civilian population and compliance with international rules of war. The only exception is the situation in Yugoslavia, where the Ustashi (Croatian Nazis) and the Nazis staged a genocide of the Serbs.

The war in the West was a kind of struggle within the same family for the right to lead in Europe. For centuries, Spain, France, England, Austria fought for this honor, in the last quarter of the 19 century Germany joined the fight. Most of the townsfolk were willing to accept the power of Berlin, if it brings them wealth. In the East, the war was of a different nature - it was going to be exterminated. The prototype of this war was not feudal wars, but crusades against the “infidels” - the Muslims, the pagan Slavic and Baltic tribes of Russia. Berlin and its curators (those who formed the worldview of Adolf Hitler and helped the Nazis to come to power) sought to destroy a different civilization, the “wrong”, from their point of view. Russia carried a different model of development for all of humanity, and therefore was the main enemy of the West on the planet. As a result, the war took on the character of the destruction of the Soviet peoples. Russian civilization could be destroyed only by interrupting most of the speakers of Russian culture and language. The remnants could be turned into slavery by working on the dismantling of the education system, the decomposition of the population (tobacco, alcohol, etc.).

In fact, the Third Reich was created and given to Hitler almost all of Europe with the sole purpose of crushing the Soviet Union, another civilization. On this basis, it becomes clear why Adolf Hitler and the German military-political leadership, after a brilliant victory in the West, instead of landing troops in England or developing a Mediterranean and Middle Eastern strategy, preferred to strike at the Union. The undoubted rationalism and pragmatism of Hitler and the German leadership gave regular failures when it came to the USSR. From the point of view of the mind, a blow to the Union was a rather dubious decision, which proved the defeat of the Reich. But if we consider the problem from the point of view of the struggle of civilizations, ideas, the decision of Hitler was quite logical. The attack on the USSR turned the intra-European conflict into a “crusade” of Western Europe against Russia. All of Europe was supposed to rally around Germany in the fight against the "Russian-Asian hordes." Many in Berlin believed that even Britain would join this campaign. In June 1941, the German ambassador to Turkey, Franz von Papen, received an instruction from Berlin: on the very first day of the German attack on the USSR, discuss with the British ambassador the question of alliance against Bolshevism. In addition, it was believed that Russia would not last long - the war will last several weeks, a maximum of months, the colossus on clay feet will fall.

Hitler's views on Russia were the same in the 1925 year, when he wrote My Struggle, and in the 1941 year. “My mission, if I succeed, is to destroy the Slavs,” said Hitler to the Romanian minister Antonescu. - In the future Europe there should be two races: Germanic and Latin. These two races must work together in Russia in order to reduce the number of Slavs. Russia cannot be approached with legal or political formulations, since the Russian people are much more dangerous than it seems, and we must use colonizing and biological means to destroy the Slavs. ” Hitler made such statements more than once or twice: “We have only one task - to carry out Germanization by importation of Germans, and to deal with the indigenous population as with Indians ... We will have to comb territory, square kilometer per square kilometer, and constantly hang! It will be a real Native American War ... ”.

After the Second World War at the Nuremberg trial, Erich von dem Bach spoke as a witness. In the run-up to the attack on the USSR, in May 1941, he was appointed commander of the SS forces in Central Russia and Belarus. Erich von dem Bach was one of the most senior SS leaders who enjoyed the full confidence of Heinrich Himmler. At the International Military Tribunal in Nuremberg, he told a lot of interesting things, including the instructions of Himmler "to ensure that only people of really German blood live in the East." For this, in his opinion, it was necessary to eliminate a significant part of the subhumans inhabiting the USSR. The number in 30 million people who were to be destroyed was named. It is clear that this is not the final figure, it is only the first outline. For example, Field Marshal Gerd von Rundstedt stated: "We must destroy at least one third of the population of the annexed territories."

Those Soviet citizens who survived were to become slaves, lowered to the level of wild natives. Adolf Hitler reasoned about it with pleasure and repeatedly. He offered to give Russian cities, after the conquest of Russia "to fall apart" without the intervention of the Germans. Cancel for the Russian vaccination and hygiene standards, but "give them alcohol and tobacco as they please." Cancel books and generally destroy the education system, leave only the radio. To establish a loudspeaker in every village: “all that is needed to the villagers is music, music and more music.”

Interestingly, these wishes of Hitler were embodied after the collapse of the USSR during the liberal genocide. The education system has undergone a powerful attack by the “reformers”, the alcoholism and anesthesia of the population has reached the highest limits, the culture has degraded.

Hitler’s closest ally Martin Borman, expounding the essence of the occupation policy in the East, said: “They can use contraceptives and have abortions, and the more, the better. We do not want them to be educated. It is enough if they will count to one hundred. Such idiots will be all the more useful for us. Religion we will leave to distract attention. ”

Naturally, the task of complete "Germanization" of the East could not be solved by the SS alone. Therefore, after the end of the war in the East, it was planned to leave 56 divisions, including 12 tank and 6 motorized. In addition to purely military tasks, the Wehrmacht was supposed to ensure the destruction of prisoners of war and help SS units in the elimination of the civilian population. True, for this it was necessary to overcome the traditional concepts of military honor of the officer corps. On March 30, 1941, at a meeting with the generals, Hitler was able to convince the command of the Wehrmacht that this war would be a war of two opposing ideologies, a "struggle for destruction." “The war against Russia will be such that it should not be waged with elements of chivalry. It will be a battle of ideologies and racial differences and must be fought with unprecedented and unrelenting brutality. All officers must get rid of outdated moral views. ... In the East, cruelty itself is a blessing for the future. " For the most part, the military leadership unconditionally agreed with Hitler's proposed war of destruction. In the East, the German army command discarded the laws of warfare and followed Berlin's orders to depopulate Russia. In fact, every Wehrmacht soldier was informed that everything is allowed to him, he is not threatened with a military tribunal.

15 May 1941 of the year Reichsführer SS Himmler handed Hitler a note in which he proposed to Germanize and settle Belarus, the Baltic republics, Ingermanland (Leningrad Oblast) and Crimea for 20 years. Thus, for two decades, it was supposed to settle these territories by the Germans, the locals waited for death and eviction.

One of the methods of exterminating the population of the Soviet territories was to be famine. The chernozem regions were to provide food for the Wehrmacht and Germany. As a result, the supply of the “forest zone”, including Moscow and Leningrad, was sharply reduced. The German leadership believed that hunger would destroy tens of millions of people. The economy of Russia, with some exceptions, was supposed to degrade to a subsistence economy, which could not feed the population existing in the USSR. In addition, hunger allowed to write off the destruction of tens of millions of "natural causes".