March 31 2018
36
Recently, I have been increasingly tracking the increasing flow of reports on the first developments in the creation of swarms (harmonious flocks) of unmanned aerial vehicles (UAVs). At the same time, more and more alarming publications appear on the need to create special weapons to protect against these future swarms. Particularly worried about the appearance of such swarms from the smallest and smallest UAVs. After all, now they are especially difficult to detect and destroy, and they are capable of bringing substantial damage, because they can effectively and accurately target and pinpoint highly accurate targets. weapon. And if, with such terrain, hang warheads on them so that they themselves attack the right targets with these charges? Such a swarm will break through, and how it will start to blow everything up! Oh, oh, oh, what will be, what will be ... 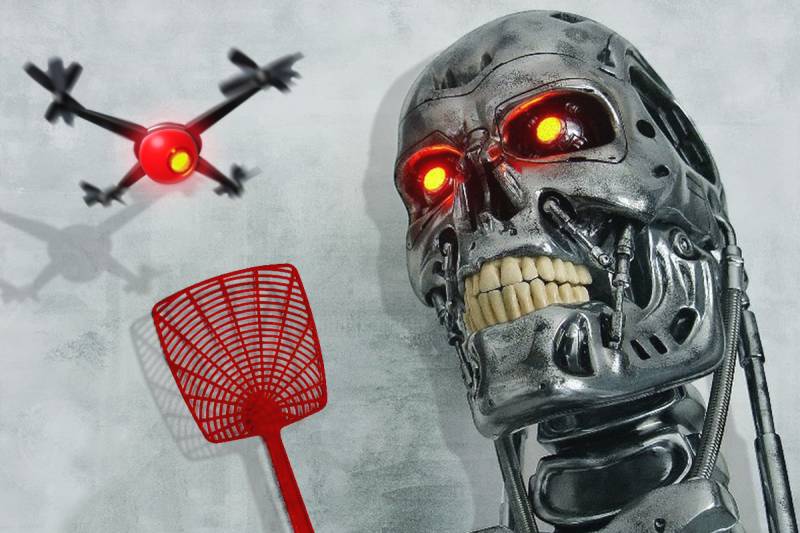 But there are also competent reasoning from our specialists, which I absolutely share. Well, yes, Americans do not spare money and are actively working to ensure that drones of various sizes and purposes can fly and maneuver in packs under the control of just one operator. It is assumed that such swarms will more effectively conduct reconnaissance of targets, direct high-precision weapons at them, perhaps, they will attack some objects like kamikazes themselves, and it will be better to “unmask” enemy air defense systems in the form of false targets, allowing the EW systems to scan frequencies, which operate radars, communication systems and control of the enemy, to suppress them without prejudice to their radio facilities.

All this sounds weighty, but in the massive and very mobile battles that will be waged in full-scale wars of the modern type, all these swarms will become simply useless, well, maybe they will be able to play some role at the very beginning of the fighting, in their preparation. Large and medium long-range UAVs are slow-moving, easy to detect and interfere with conventional types of air defense and aviation, especially if they will fly in a bunch. And the smallest and smallest UAVs fly close, not high, slowly and can still act only in clear, calm weather. That is, the launch and control platforms for these UAVs should be in the nearest front line and, therefore, will be in the zone of destruction of light artillery and even mortars. Or these swarms of UAVs will need to be launched from airplanes or helicopters, which will also be subjected to immediate attacks, even when approaching the point of release of their UAVs.

We make an assumption that after all the swarm of the smallest UAVs managed to be released, and he pushed to the target. It is a clear windless day, otherwise these swarms do not work. In any case, this size of the UAV does not fly fast or high. A flock will be easy to recognize even with a glance. If this is a swarm of spotters reconnaissance, then they can fly for a short time, otherwise they will not return. If this is a swarm provocateur for opening frequencies, then after identifying it, it is possible to include false beacons at false frequencies, which will detect the enemy’s radio intelligence, and the “birds” will fly and fall, and they will be disposable. Suppose this is a “kamikaze” swarm for undermining something there ... You cannot install a large charge on small devices, therefore such a swarm will fly tightly and attack the target in a heap for maximum undermining. Again, such a swarm will obviously not be launched for the destruction of platoon and even regimental targets. These will be objects of divisional and even higher value. And they are covered and, respectively, good radar and powerful weapons.

And the classic documentary film that captures the attack of Japanese suicide planes on an American aircraft carrier arises in my memory. At maximum speed, kamikazes are trying to crash into an almost-standing giant ship, and from there, along with the entire perimeter, the multi-barreled anti-aircraft guns of the Oerlikon system are poured fire on the landing zone. Kamikaze fly into this fire curtain, who fly apart and those who lose control, are thrown off course, in general, everyone ends up in the water instead of an aircraft carrier. So I imagine how a bunch of small kamikaze UAVs are trying to “bang”, say, the division headquarters, and the landing zone to the headquarters is being watered with a small fraction of multi-barreled smooth-bore anti-aircraft guns. A small drone even from hitting a single pellet fails. A swarm of scout-spotters who circle the kamikaze above, shoot from the same shotguns from an ordinary helicopter, and all the “love”. Cheap and angry!

In general, at present, a UAV is a weapon only against an adversary who is technically obviously weaker than his enemies. And so it will be a very long time, no matter how they swarm. However, I consider the work on the creation of these flying schools to be necessary and very promising, which should be adjusted and carried on with us at least as hard as possible in other countries.

I explain. UAVs have been and still remain a policeman’s weapon, designed to combat terrorists and other armed criminals in order to minimize losses, especially human, in anti-terrorist units. It is usually necessary to fight with terrorists either in the conditions of urban development, or in remote areas, where they are reliably strengthened and capable of long, not sparing themselves, fiercely fight off until they manage to completely destroy them. Quite often one has to read that here somewhere in the house or the forest dugout they blocked the terrorists, and during the assault or in the shootings there were losses among the special forces, no less than all the killed bandits. So I dream, on the basis of, among other things, the already existing technical developments that surrounded a strong house or else where a group of terrorists with machine guns, machine guns, grenade launchers, and they don’t have another weapon, they started a firefight. The special forces are firing at themselves, it follows that no one sneaks out, he does not climb into the fire, only fixes who is where they are located. So everything goes before dark. And behind the special forces, an armored car arrived and stood in safety, but nearby. And as darkness came, so a silent gaggle of small ones like hummingbirds flew out of an armored car, and even the devil does not joke, even like large mosquitoes, dronchikov. They fly on electric motors with batteries, which means they do not make noise. The power reserve of their minutes on the 20-30, each aboard has the smallest video eye and one more thing ... And in the armored car, the operator at the console looks at the monitor. The swarm flew up to the hole in the house or dugout, it can be done in advance and specially from the cannon, flew there, spotted where each thug was, distributed the drone against each - and the attack! Straight into the faces or other unprotected points of the body from the closest distances, either the darts were let in, or small bullets fired, or they themselves were stuck with some kind of stings, and the darts, bullets, stingers - with the strongest poisons. Maybe from the first time and not all will be overwhelmed, but panic among the survivors will induce more, and you can launch the next swarm to panic, which will finish the rest. So the special forces will only ship the corpses and take them to the morgue.

PS My first article with the suggestion of shotguns to fight the smallest and smallest drone I опубликовал in 2016 year. And recently it came message, which says that the concern "Almaz-Antey" began experiments on the installation of shotguns on drones to fight swarms small UAVs. A month ago, I saw on TV how in America sparrow-sized drones were shown, on which the smallest video cameras and charges in 2 gram of TNT equivalent are installed. Such a charge, having exploded near the head of a person, gouges it into pieces, despite any helmets. The Americans showed these "birds" in order to discuss what they would have to do when such technologies were in the hands of terrorists, and they would try to apply them in cities?

Yeah! Military technological progress is jumping ahead of the wildest fantasies. And those who will not rush after him will choke with their blood. All история humanity clearly shows it.