March 31 2018
98
In Sweden, in all seriousness, they are working on plans for a war with Russia. In particular, Swedish generals and politicians are working on a total mobilization plan. In Stockholm, expect to hold at least three months before the approach of reinforcements. Apparently, from countries belonging to NATO and located on the other side of the Swedish border (Denmark, Norway and Germany). 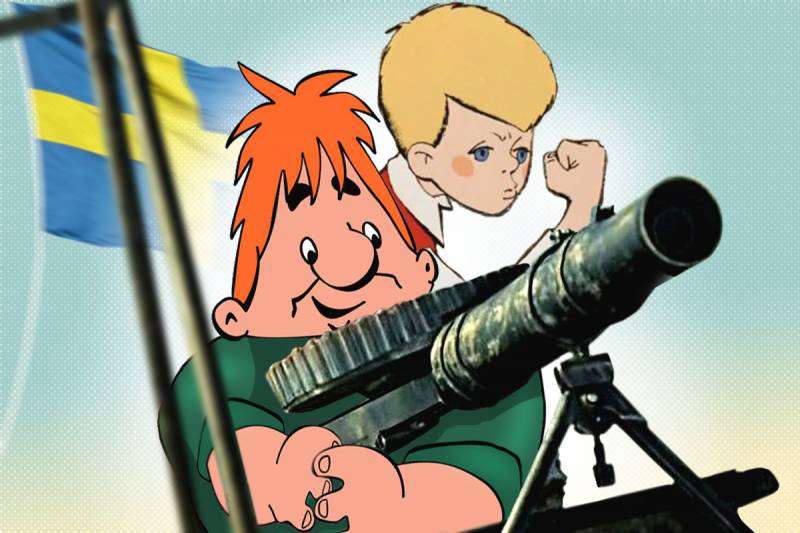 Currently, Sweden is separated from the Kaliningrad region by a little more than 230 kilometers of the smooth surface of the Baltic Sea. Long and narrow, one can say elongated, the shape of the country makes Sweden vulnerable to air attack from several sides. At the same time, Sweden, along with neighboring Finland, is in a unique position, these are the only countries of the Baltic region that are not members of NATO (except, of course, Russia itself), they are noted in Defensenews.

In the coming years, Sweden is going to seriously upgrade its defense infrastructure, preparing to survive the potential invasion of an “unidentified external enemy,” which is suspiciously similar to Russia. It is worth noting that earlier, Sweden had plans for the total mobilization of the population and industry, but all of them were developed during the Cold War, and after the collapse of the Soviet Union they went on the shelf, and at the same time a serious reduction of the Swedish armed forces was carried out. Now Swedish generals and politicians are developing such plans again, speaking of the total mobilization of the country and society in the event of possible aggression. 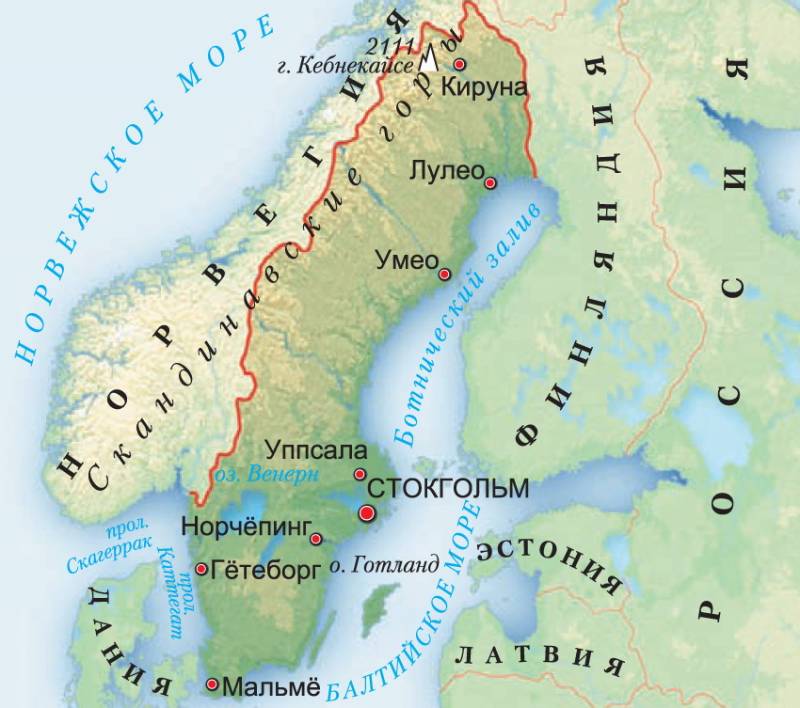 At the same time, the plans for the total mobilization and civil defense of the Cold War period were distinguished by a serious level of elaboration, to the extent that garages were designed with the possibility of being used as shelters during military operations. According to the plans, the new Swedish mobilization doctrine will require serious cash infusions. So in the period from 2021 to 2025 a year, Sweden plans to spend an additional 4,2 a billion crowns (about 510,5 million dollars) for various defense needs. This additional funding does not include the already planned military spending. In addition, Sweden allocates additional orders of 400 million crowns per year for 2018, 2019 and 2020 years.

According to the plans of the head of the parliamentary defense commission, Bjorn von Sidov, and the head of the commission’s secretariat, Tommy Akesson, total mobilization will allow Sweden to hold out in case of an invasion for at least three months, reports a specialized publication Defensenews. “If you are a member of the North Atlantic Alliance and you are attacked, you can count on help from other NATO nations that will come to the rescue. This does not apply to Sweden, for this reason the kingdom plans to mobilize the entire country if Russia is attacked by it, ”they say in Defensenews.

The Parliamentary Defense Commission was formed in Sweden in 2017, the main purpose of its work is to revive the concept of the so-called “total defense” or “total mobilization”. In fact, we are talking about resuscitation of plans that existed during the Cold War. According to Tommy Akesson, considerable attention will be paid to civil defense issues, infrastructure development: the construction of warehouses and shelters, the development of medical care and pharmaceuticals, and solutions in the field of emergency response. Part of the funds the Swedes are going to spend on cybersecurity and training aimed at opposing propaganda and newsdistributed through social networks. According to Bjorn von Sidov, this is important, since the commission takes care not only of protecting the country, but also of protecting democratic principles that are designated as vital for the Swedish nation.

Yury Melkonov (Riga), the chief editor of the military-historical magazine Baltfort, does not exclude that the Swedish General Staff seriously considers all options for a possible Russian aggression: by air, by land or from the sea through Finland or even on the ice of the Gulf of Bothnia in winter. In an interview with the newspaper “Vzglyad”, he recalled that during the time of Peter I, that is, 300 years ago, the Russian landing force landed from the sea in what is now Sweden. "Then the Russian troops commanded by Apraksin approached 150 kilometers to Stockholm, to the town of Norrköping, which eventually burned down," the military expert recalled. Even a hundred years later, during the reign of Emperor Alexander I, Russian troops also reached the Swedish coast, but already on foot on the ice across the Kvarken strait in the Gulf of Bothnia. These events took place during the Russian-Swedish war of 1808-1809, which ended with the victory of Russia, after the war of Russia, Finland withdrew. 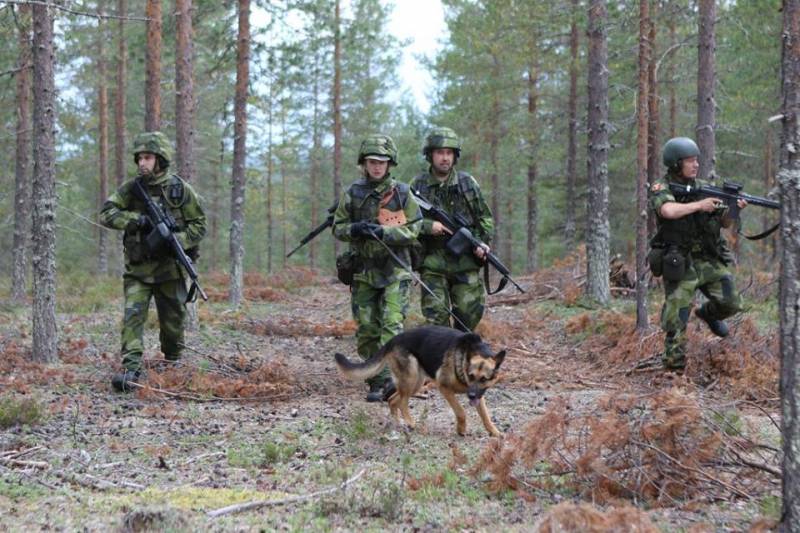 Swedish reservists / militiamen at training camp
At the same time, Yuri Melkonov is puzzled, for what reason in Stockholm seriously discuss the period of three months. The expert recalled that modern conflicts are often measured not in months, but in days. “What are three months? We would have to stand for a day and stay the night, ”Melkonov joked about the Swedish plans. At the same time, he is sure that there are quite a few of those among the citizens of Sweden, then, if necessary, he will be ready to defend his country and conduct partisan actions, live in forests and caves, and run in the mountains with machine guns. He recalled that the Swedish volunteers quite actively participated in the Soviet-Finnish war, stressing that the Swedes are able to fight.

Konstantin Sivkov, First Vice-President of the Academy of Geopolitical Problems and Doctor of Military Sciences, believes that Swedish generals are quite seriously counting on using the regular troops to keep the country’s territory for the three months indicated. However, he believes that a hypothetical invasion of the most populated southern part of the kingdom may take a few days.

However, in the mountainous areas of the country, the Swedish military can really gain a foothold for a long time. “The Russian Federation has no common borders with Sweden. First you will need to capture Finland. That is, the invasion of Sweden itself will be preceded by a rather long stage - front-line operation 5-10 days, ”said Sivkov in an interview with the newspaper“ Vzglyad ”. According to him, for the 5 days, the kingdom will have time to complete mobilization, which will allow the country to create a deep echelon defense in the mountainous areas and to ensure the deterrence of the advancing troops. At the same time, Sweden will be able to rely only on its own small air defense forces for protection against air attacks, therefore the effectiveness of such protection will be very low.

In general, the capabilities of the Swedish armed forces seem modest. For the defense of the fifth largest country in Europe, the Swedes are ready to deploy a little more than 20 thousand troops without taking into account reservists. At the same time, the Swedish armed forces are well equipped with modern weapons and military equipment. Although with some features, in particular, the air defense forces are really extremely weak, however, the country has a fairly large fighter fleet aviation. The Swedish Air Force has 98 modern fighter-bombers JAS 39 Gripen in versions JAS 39C and JAS 39D own production. Ground forces have a large supply of modern armored vehicles, presented as the German main combat tanks "Leopard 2" (about 130 tanks) and BMP own production Strf 90 (more than 350 units). At the same time, the Swedish Navy is armed with modern Visby corvettes (5 units built), which are even called the world's first "real" warships built using stealth technology. The peculiarity of Sweden is that the country has a developed military-industrial complex, which allows creating and producing a wide range of weapons and military equipment competitive on the international market. 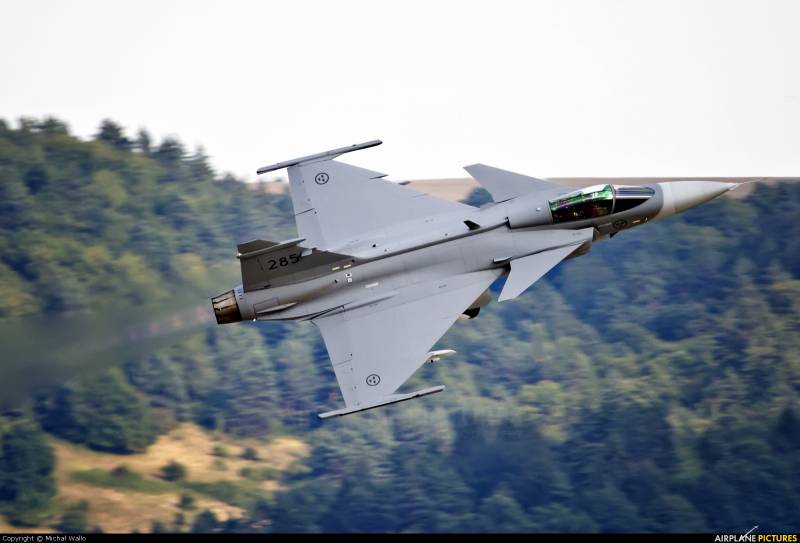 JAS 39C Gripen Swedish Air Force
Where, in principle, in Sweden came this half-crazy idea - to defend against Russian aggression. The fact is that anti-Russian sentiment in this country is quite common. Sweden is traditionally located in the group of states in which citizens most negatively disposed towards Russia live. For example, data from the Transatlantic Trends poll conducted in 2016 showed that 79 percent of citizens of the kingdom treat Russia badly. This figure is higher than in the Baltic countries, which are even closer to Russia.

At the same time, Swedish society truly believes in the threat posed by Russia. Nearly three-quarters of the Swedes recently spoke in favor of introducing equal military service. On this 4 January 2016 of the year was reported by Radio Sweden. The fact that 72 percent of the country's citizens are in favor of restoring universal conscription in the kingdom, Dagens Nyheter reported, having ordered the corresponding sociological research from the Ipsos public opinion monitoring service.

At the same time, 87 surveyed Swedes believed that conscription should be gender-neutral, that is, apply equally to men and women (hello to the Israeli army). Conscription was abolished in the kingdom relatively recently, it happened only in 2010 year. After that, the Swedish army became fully contractual, however, in the course of the reform, its ranks were not fully manned. It is noted that the incomplete staff of the Swedish armed forces in terms of soldiers, sailors and military personnel of junior commanders was approximately 7,5 thousand people.

As a result, in 2017, the military appeal, taking into account public opinion, the general situation in the world, was restored. The first call again took place on July 1 2017. At first 100 was sent to thousands of young people 1999 and 2000 of their birth. Then, 13 of thousands of people were chosen, four thousand of whom will have to complete military service in 2018 and 2019. In the future, it is planned to gradually increase the number of recruits to 8 thousand per year. At the same time, Swedes who were born before 1999, were exempted from military service. In this case, the basis of the army will continue to be contract soldiers. 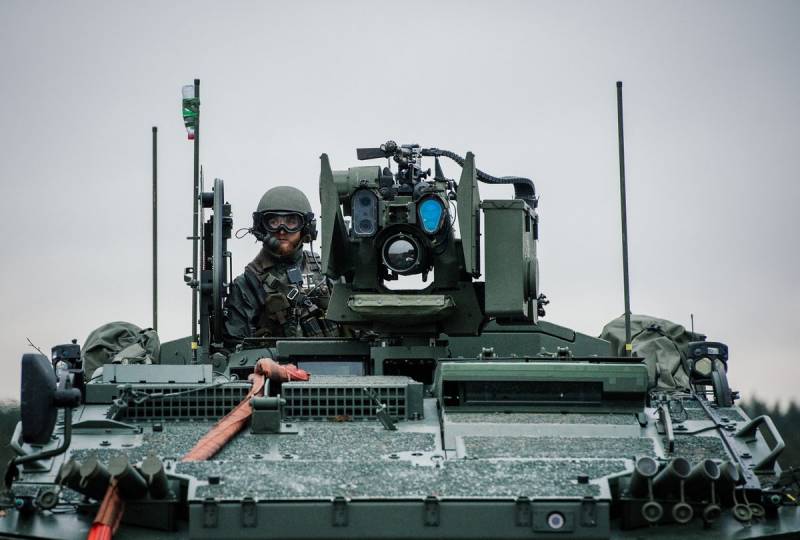 Swedish soldier and multi-purpose wheeled armored combat vehicle Patria XA-360 AMV
The Swedish publicist Matthias Göransson, who wrote the book Bjornen kommer (“The Bear Is Going”), spoke a lot about the moods of Swedish society. He had previously told reporters from Russia that a kind of cult had developed in the kingdom: from childhood, the people of Sweden had been regularly searching for Soviet submarines. According to Göransson, in 1980-1995, the Swedish authorities registered almost 6,5 thousands of reports of Russian submarines. Another surge in such “hunting” was registered in 2014 year. That year, the authorities registered 300 signals from ordinary citizens who claimed to have seen submarines. True, in the end, not a single boat was ever found. Melkonov admits that during the time of the USSR, our submarines were really actively defiling past the Swedish borders. “However, Russia is absolutely not needed now, as Sweden is not considered in Moscow as a possible aggressor,” believes Yury Melkonov. Moreover, no other country has a reason to attack Sweden.

Military rhetoric, which is increasingly heard from the lips of Swedish politicians, is attributed by a military expert from Riga to the daily activities of the Swedish Ministry of Defense, which simply needs new budget funding. “Why do they get money? To protect the country. They conduct exercises, scare the locals, ”the expert notes. At the same time, Konstantin Sivkov believes that Sweden is developing a "crazy scenario", which even remotely has nothing to do with reality. “Russia is not capable of this even theoretically. The combat strength of the Baltic fleet so small that the maximum is able to transfer three battalions, which is simply ridiculous to attack Sweden, ”the expert emphasized.

Ctrl Enter
Noticed oshЫbku Highlight text and press. Ctrl + Enter
We are
Sweden is preparing to partisan against RussiaPoltava. The nail in the coffin of the Swedish state
Military Reviewin Yandex News
Military Reviewin Google News
98 comments
Information
Dear reader, to leave comments on the publication, you must sign in.