"Guantanamo" for germs or plague blankets for natives?

March 30 2018
27
The network of American microbiological laboratories deployed around the perimeter of Russia has been discussed for a long time and much. It would seem, why go back to this topic, if the laboratories are still built, and new data that can somehow affect our attitude to this aspect of the American presence on our borders does not appear?


Nevertheless, there is one reason for such a conversation. And this is nothing but an extremely increased degree of military threat from the United States and its European satellites. 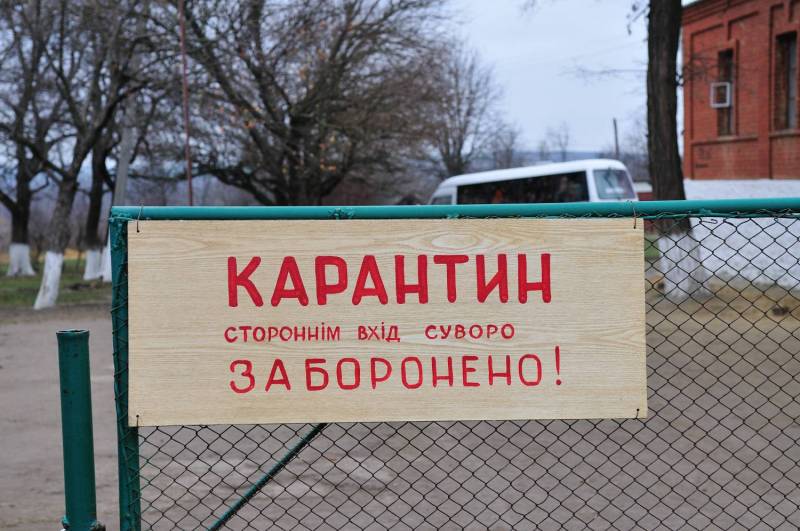 Think anything, but if the Russian foreign minister says that Americans are preparing Europeans for the use of nuclear weapons against Russia, and the president of Russia in his annual message devotes a great time to new types of weapons, which have a strategic purpose, we have the right to think that war is really marking time on our borders.

So, those opportunities that were previously modestly called “potential” are about to turn out to be the most sought-after and priority ones. And microbiological laboratories, which “potentially can” produce combat strains of the most dangerous microorganisms, are likely to be engaged in this.

If you have not already taken ...

Before proceeding to the analysis of the situation opening up from a new perspective, let's still give at least a little help for those who were in blissful ignorance or just lazy to reinvent all the information that is in the public domain.

So, as part of an agreement signed by the Ministry of Health of Ukraine and the US Department of Defense, 29.08.2005, a whole network of facilities was opened in the territory of our neighboring state, the purpose of which is to study strains of various pathogenic microorganisms. Among these objects were both relatively small laboratories on the basis of various institutions of the Ukrainian Ministry of Health, and full-fledged reference laboratories with a third level of microbiological protection and capable of working with highly active strains of pathogenic microorganisms, including those with fighting ones.

Also, similar work was carried out with other states located along the perimeter of Russia, and not only. In particular, in the field of this cooperation, our Georgian neighbors have succeeded: in addition to the Central Reference Laboratory, several other facilities were built there, including a bank of causative agents of acute and dangerous diseases.

Add to this Kazakhstan, Azerbaijan, Tajikistan, Moldova, Kyrgyzstan and even Armenia, which joined this project a little later, but quite actively.

It would be useful to remind you that our neighbors met Americans with empty hands. In addition to the property of old scientific research institutes or veterinary stations, they transmitted, in particular, the collections of fighting anthrax, plague, tularemia and other strongest pathogens that they had preserved from the times of the USSR.

This program was promoted under very plausible excuses. It was about preventing a threat, taking control of a dangerous Soviet inheritance, taking care of the life and health of people in post-Soviet countries and preventing the spread of natural foci of infections traditionally present in a given state.

However, there were great oddities (to put it mildly). For example, the curator and main implementer of the program was the US Department of Defense. Even more strangely, in fact, this was done by RUMO, the Intelligence Agency of the US Department of Defense, a direct analogue of our GRU. In 2017, a well-known “Cyberkurbut” conducted a serious investigation into this matter, and the results published by him directly point to specific curators from the RUMO, operating both through diplomatic and allegedly commercial channels. The table below quite clearly shows who and in what way promoted and implemented the American program. 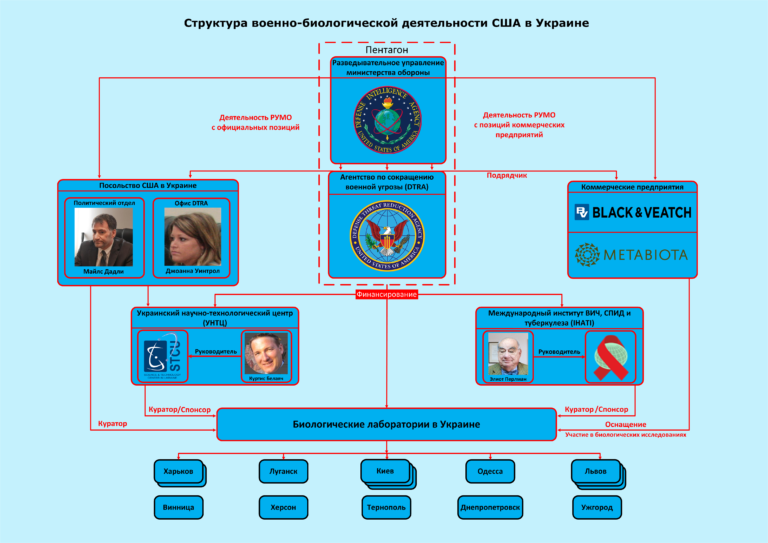 The very need for such cooperation caused some surprise: oddly enough, Ukrainian sanitary-epidemiological services were considered to be among the most competent in Europe, and Ukraine hardly needed such close care from the American defense department, even if it got rid of the thought of possible threatened by terrible Soviet bacteria.

The only relatively plausible assumption was that the Americans, who are very sensitive about potentially unlawful actions on their territory, are trying in this way to remove some developments from under American jurisdiction. Something like the camp for prisoners of war at the American Guantanamo base: if the US military and special services tortured prisoners in the United States, someone would probably go to jail. In addition, the prisoners would be subject to the jurisdiction of American courts, they would have been assigned lawyers, the terms of their detention without charge would be rather small and so on. Therefore, the Americans acted smarter: they placed their prison outside the United States and were given the opportunity to torture prisoners with impunity and keep them under arrest for years without presenting any arguments whatsoever.

Is it possible that in this case the Americans were guided by similar motives? Yes, it is possible. But is this the only motive? And the main thing: should we have been calm about this program, knowing that the Americans are going to do something there that we need to hide even from our own government?

The conclusions reached by analysts, even then, were seriously doubted. In particular, the idea put forward by someone that the Americans are allegedly building some kind of microbiological analogue of missile defense does not withstand criticism if only because no one will attack America or its closest allies, releasing the plague and anthrax near its borders. The official version is also untenable - there are many states in the world in which the infectious situation is much worse than in Central Asia, not to mention Ukraine. And such a large-scale program would be much more appropriate and necessary somewhere in Africa or Bangladesh, and not in Odessa, Kharkov, Dnepropetrovsk, and so on ...

The arguments of those who spoke of the possible sabotage use of microbiological samples available there sounded much more rational. And, in particular, sabotage against Russia, which was once confirmed by the chief sanitary doctor of Russia (at that time) Gennady Onishchenko. Let me remind you that once he said bluntly that the sudden outbreaks of African swine fever are nothing but sabotage, the traces of which lead to the Georgian Central Laboratory.

However, the picture we can see today is even more unpleasant. And the fact that it was difficult to understand a few years ago is now becoming much clearer ...

First of all, we need to once again note that the Americans and their allies traditionally treat us more seriously than we do to ourselves. And their analysts, as well as secret services in general, never abandoned their attempts to finish off Russia. Even when she showed her friendliness in every possible way and tried to go strictly in line with Anglo-American politics.

There is no need to go far for examples: this is the support of the Chechen separatists, the withdrawal of the Americans from the ABM treaty, vile strikes like the “uranium deal” and the military rout of Yugoslavia, which was necessary for the West with only one goal - to destroy Russia's last ally in Europe and not to give her, if anything, a foothold in the Balkans and in the Adriatic.

One of the manifestations of such Russophobic foresight was the network of microbiological laboratories that we are talking about.

A small clarification: we will not deny that these stations could be used both for research purposes and for subversive purposes. But now the main thing is becoming more and more obvious: these laboratories are a microbiological mine on which Russia can “step in” if it decides to force release of the left-bank and southern Ukraine.

Yes, I mean it is the opportunity now available to Americans not only to infect the liberated territories with strains of dangerous microorganisms, but also to present everything in such a way that the Americans themselves have nothing to do with it.

In order to realize such a threat, US intelligence agencies will not need much effort. They can even depict artillery shelling, even the unsuccessful attack of Russian special forces, even the attack of military units of the forces of Novorossia, even the fall of an unidentified UAV ... In general, there are enough options, and all of them are quite simple to implement and are quite good for fooling public of their own states.

And they don’t need anything more: they don’t exactly plan to justify themselves before us ...

Thus, the Americans and their allies will be able to reduce to almost zero the economic benefits of joining the fertile and industrialized regions of the east and south of Ukraine. Moreover, because of the likelihood of infection spreading to Russian territories, in particular, located in the middle and lower reaches of the Don River, the damage to Russian agriculture and the tourism industry can be extremely large and very long.

In case the reader feels that the author simply scares him, let me remind you once again that S. Lavrov spoke about the possibility of using nuclear weapons against the Russian Federation, and President Putin spoke about our strategic weapons and illustrated his story with pictures in which the trajectories our missiles ended up somewhere in North America.

And this, I assure you, is by no means a joke and journalistic nightmares on duty.

The only reliable way to neutralize the microbiological threat is a nuclear strike on the object. Alas, the defeat of the microbiological laboratory with conventional weapons would rather set the infection free, rather than solve the problem. Not give full guarantee and the use of thermobaric ammunition. Perhaps the problem would be solved by tons of napalm or other flammable liquids, but delivering them to the point of discharge is somewhat more difficult.

Of course, there is another way. Namely, the counter threat of comparable scale. And she, I dare to hope, can cool the hot Anglo-Saxon head on both sides of the Atlantic. But if the Americans hope for their security and still go to such an escalation, the situation will become incredibly complex and unpredictable.

In conclusion, I want to remind you that the “enlightened Europe” already has a successful experience of bacteriological warfare. Yes, we are talking about the most plague blankets that the Spanish conquistadors gave to the South American Indians.

But the enemy remained the same.

Ctrl Enter
Noticed oshЫbku Highlight text and press. Ctrl + Enter
We are
Situational analysis of the death of the MH17 flight (Malaysian Boeing 777), made on the basis of engineering analysis from 15.08.2014Results of the week. “In our cooperative, the board is always agreed”
Military Reviewin Yandex News
Military Reviewin Google News
27 comments
Information
Dear reader, to leave comments on the publication, you must sign in.