The collapse of the hegemon spotted the entire planet.

March 31 2018
66
The United States in the eyes of the world is losing its former influence. Even the closest satellites slip out from the care of the overseas hegemon. 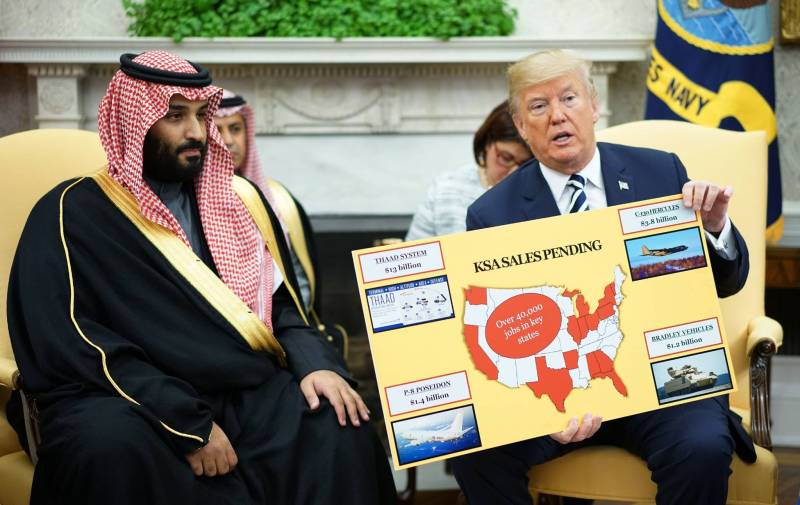 In the photo: US President Donald Trump is agitating American taxpayers for his course in support of the “domestic producer” (a way to return America’s former economic power). The map shows US regions where new jobs will be created thanks to the signing of supply contracts by the White House weapons Saudi Arabia

In reality, things are not nearly as glamorous as in the parade shots. As evidenced by the facts of the most recent days.

For example, it is reported that the United States and Poland finally shook hands on the issue of the purchase of the American Patriot missile systems by Warsaw. And it seems that Trump's “employer” has another reason to rejoice.

Meanwhile, if you look at this event more closely, it is not difficult to see that Washington has no special reasons for euphoria. The fact is that his initial offer was reduced to the fact that Poles, who in the States are not without reason included among their most unquestioning satellites, were offered with purely American ease to purchase Patriot 4 batteries for a very round sum exceeding 10 billion dollars . Which, by the way, is about four times more expensive than a similar number of far more advanced Russian S-400 “Triumph” air defense missile systems.

The Poles naturally howled from such an American surprise and declared the complete lack of capacity for Poland of such an astronomical sum. This is what was announced on this occasion officially. I think that on the sidelines there were much stronger expressions, the leitmotif of which was the deepest resentment of the Polish admirers of America, whom their object of love wanted to stupidly dissolve with money.

The matter ended with the fact that in the United States they apparently realized that they had gone too far and decided to immediately play back. As a result, the Poles managed to knock off almost half of this monstrous amount and buy the same 4 batteries for 4, 75 billion dollars. Albeit not in the "premium" -kitting.

Thus, even in the case of his most loyal ally, Washington's business is clearly not burned out. In fact, the amount of the transaction halved by the Poles showed that the current United States is far from being such an undivided owner even on its own geopolitical farmstead, as it seemed more recently. 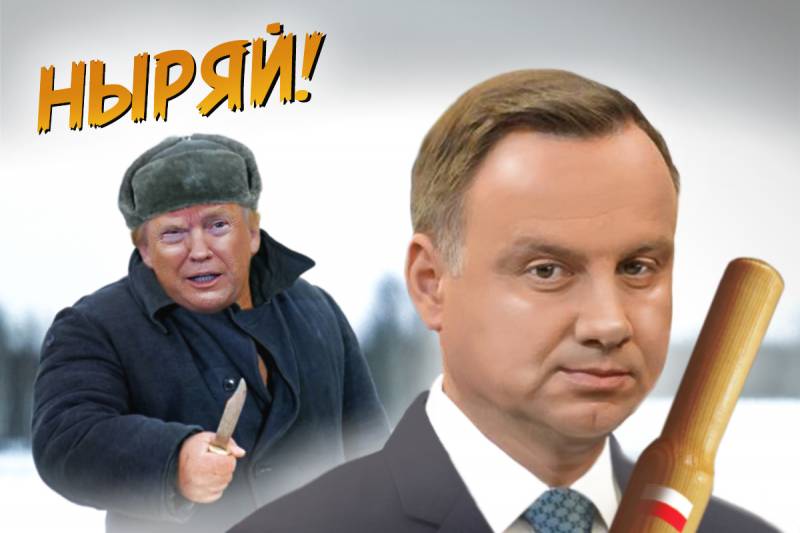 And this is far from the only illustration of the fact that the unconditional subordination mode in the Western world is no longer monolithic and gives more and more noticeable cracks.

A classic case of this kind - история with Washington’s attempts to sniff out its solvent allies (but not Poland, of course) its irreparably problematic and daunting F-35 fighters. The Americans, almost for the first time in their history, were forced to take an unprecedented step - to arrange a global sale of their newest type of weapon, which plainly did not even enter into service with the United States themselves. The reason is quite obvious - the exorbitant high cost of this “innovative” airplane, the gigantic expenses already incurred by the United States under this program, plus the apparent inability to fully pursue it without foreign financial injections.

However, in this case, the undertaking of the American "great combinators" seems to have been crushed. The majority of potential US customers reacted with utmost restraint to American attempts to foist on them with clearly not driven to the mind and at the same time super-expensive cars. As a result, the most hassle-free customer of this technology turned out to be ... Israel, which will not pay a penny for it, since F-35 is supplied to it within the framework of "fraternal American assistance." The rest of the “buyers” get rid of Washington's harassment, agreeing, and then - at best, to buy two or three times fewer planes than originally planned.

A typical example is the Netherlands, which at first swung to 85 F-35, then reduced their purchase to 37 and continued a heated discussion. on this occasion.

According to the report of the Klingendaal Institute of International Relations (The Hague), submitted at the beginning of the year, the adoption of the controversial JSF fighter is the least attractive scenario for the development of the Dutch Armed Forces. Klingendal reports that F-35 will be in demand only if the Netherlands decides to take part in the initial phase of military intervention in another country. But usually the Netherlands rarely takes an active part in such operations.

Their loyalty to the original purchase obligations of the F-35 is observed so far, except that the key countries of the Anglo-Saxon World Club are the United Kingdom and Australia, which, by definition, cannot have any differences with America. However, the UK Ministry of Defense has already announced that it is considering the possibility of a serious reduction in the procurement plan for these vehicles. And neighboring Canada has completely abandoned this dubious luxury, getting rid of annoying Yankees by transferring to the project’s general treasury, in order to preserve its symbolic membership in the F-35 Fans Club, miserable 30 million dollars a year.

Interesting is the situation with Turkey, which the Americans, in the order of punishment of this country for the purchase of the Russian C-400 air defense system, set out to be excluded from the production and supply program of F-35. However, nothing came of it. As it turned out, the Turks produce one of the important components for this machine. And, in the event of their withdrawal, the remaining partners, primarily the United States, will bear an additional burden of at least 12 billions of dollars. For today's America, this seems to be a very heavy amount. Therefore, the local State Department hurried to slow down the polemic and practically stopped blackmailing Turkey with the non-delivery of F-35.

However, this is unlikely to help the US rearm its combat Aviation. As it became known the day before, the States do not rule out a landslide reduction in their ambitions regarding construction fleet F-35. Here is what the American agency writes on this subject. Bloomberg:

“The US Air Force may be forced to cut purchases of fifth-generation F-35 fighters by a third if the agency fails to find ways to reduce operating and support costs by 38% in the next 10 years. Because of this, 1 776 airplanes that are to be produced for the USAF can deduct 590 F-35 from 2070. The point is that the United States may face serious problems in the future financing of maintaining aircraft airworthiness. Before 1,1, XNUMX trillions of dollars can go for this only from the Air Force budget.

Thus, there is a very depressing global trend for the United States. Without the support of their foreign allies and vassals, the States no longer pull even the key programs of re-equipping their armed forces. The US military industry is increasingly dependent on the presence or absence of foreign orders. And the allies, in their turn, are fully aware of the diminishing possibilities of the “world hegemon” and, taking this opportunity, are beginning to press the US more and more persistently for advantageous conditions for further cooperation.

And, admittedly, not without success. As confirmed by the Polish purchase for half the original price of the American Patriot air defense system. And the actual collapse of the international fighter program of the new generation, on which so many hopes were pinned in Washington, and as a result they came to the conclusion that even their own Air Force cannot be re-equipped today.

In fact, the confrontation of the previously unconditional American world hegemony is growing not only from such traditional opponents of the United States as China and Russia, but also within the West itself. Where the American allies themselves are becoming increasingly aware of the irreversible weakening of their patron and are in a hurry to use it to pull the blanket over themselves.

Ctrl Enter
Noticed oshЫbku Highlight text and press. Ctrl + Enter
We are
Overseas ally? Donald Trump - US Presidential CandidateResults of the week. “In our cooperative, the board is always agreed”
Military Reviewin Yandex News
Military Reviewin Google News
66 comments
Information
Dear reader, to leave comments on the publication, you must sign in.