March 31 2018
71
Mass "anti-weapon" demonstrations took place in the USA. The goal of the protests, in which hundreds of thousands of people took part, was to get the authorities to tighten up the rules for acquiring and using them. weapons. 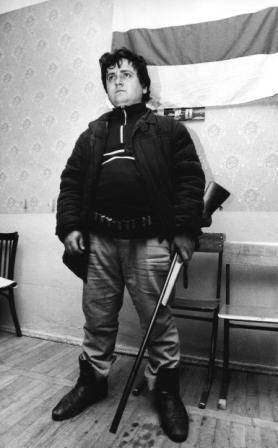 The formal reason for the tragic events of February 14 2018 in Florida, when 19-year-old Nicholas Cruz from a semi-automatic rifle killed 17 students of the local school.

However, these speeches should not be viewed as a separate event, but as one of the episodes of a long-standing controversy between hoplofobs (people experiencing a pathological fear of guns) and advocates of the right of American citizens to weapons. Or even wider - as a dispute between liberals and conservatives. When first try to use a resonant event to weaken the positions of opponents.

That is, past speeches are part of a rather complex political game, part of which is the fight against Donald Trump of his opponents, in which the actual weapon problem is more likely a tool and a pretext.

But domestic hoplofobs do not delve into such subtleties, and use each such episode to confirm the “American experience” of their own calculations.

However, regardless of the political context, American and Russian opponents of civil arms trafficking related to any citizen who has weapons on a legal basis, as a suspicious type, and to a latent criminal.

The fact that an armed man is a potential defender who can stop a crime. Or even to defend their homeland and their people.

And this is no exaggeration. To verify this, let us turn to the events of 1990-1991, which occurred in South Ossetia. 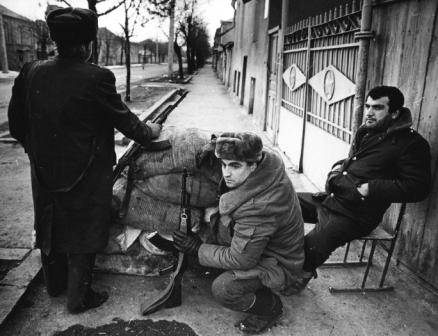 In December, the 1990 of the year on the territory of the republic, which then had an autonomous status as part of the Georgian USSR, the internal affairs agencies began to seize firearms from hunting citizens. Hunters were informed that due to increased tension, the weapon would be held in custody at the district police stations. But when the assembled carbines and rifles were delivered there, they, on the orders of the then Deputy Interior Minister of Georgia, General Shaduri, were taken out of South Ossetia along with the service weapon of local policemen.

However, it was not necessary to speak about the complete seizure of hunting weapons: the law-abiding nature of Caucasian men does not extend so far that, by an incomprehensible demand, they surrender their guns. Yes, and in the light of impending terrible events. So, the “trunks” were taken away only from the units, the rest of them “lost”, “drowned”, or the owners themselves simply did not find themselves at home.

Also, not all Ossetian militiamen were ready to disarm.

Police Colonel of South Ossetia Georgy Vaneev, who was then responsible for arming, was able to save thirteen machine guns and several pistols, which were handed out to Ossetian policemen.

These thirteen machine gunners became the first composition of the legendary South Ossetian OMON, which later covered itself with unfading glory. 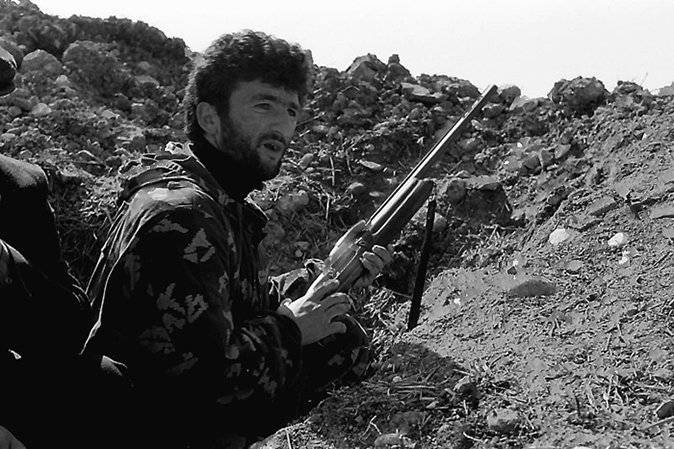 A little later, they got armor - two written off old BTR from the local DOSAAF. The first detachment commander, Vadim Gazzayev and his fighters, repaired them and installed them in Oak Grove, which became the first base of the newborn OMON.

And on the night of January 6, 1991, the internal troops of the USSR Ministry of Internal Affairs, which were supposed to maintain stability in the region, were taken to the barracks without notifying the leadership of South Ossetia. At o'clock in the morning, the 4-thousandth detachment of Georgian militia and Georgian militants disguised as militia and amnestied criminals and drug addicts the day before entered the city.

With them was a large number of equipment and dogs. Georgian police occupied the central part of the city, blocked all roads and intersections. Torture, arrest, murder, arson, and violence began. In the evening of January 6, Georgian police opened fire on unarmed people. The next day of January 7, which became known as “Bloody Christmas”, was marked by massive crimes committed by invaders in different parts of the city and in the vicinity. So, on this day in the village of Eredvi, Georgian “militiamen” chopped off the head of 87-summer Ossetian Yerdi Hubaev with an ax.

The purpose of this “lawlessness” was clear: January 8, speaking on Georgian television, Georgian Interior Minister D. Khabuliani said that the Ossetian people who disagree with the decision of the current Georgian government should leave the borders of Georgia (meant by South Ossetia).

But, fortunately, the Georgian gangs failed to carry out the planned ethnic cleansing and genocide. This was prevented by the fierce resistance of the inhabitants of the city.

In addition to the thirteen OMON rifles, Tskhinval was also protected by hundreds of rifles and carbines of the militia. However, rifle rifles were negligible. The main weapon defenders of the city in those terrible winter days were Tula kovkovye double-barreled guns.

But at that moment there was enough of that. Confident in their impunity, the rapists, robbers and murderers, dressed in police uniform, did not expect repulse. And faced with armed resistance, they ran out of the city. This was the case when, according to the Monk Cosmas of Aetolia, “one gun saved a hundred souls”. 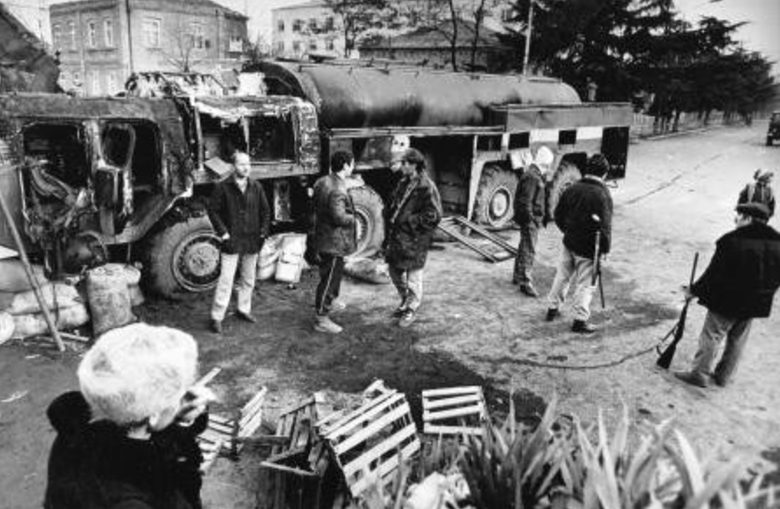 Due to the massive desertion of the “policemen,” Tbilisi threw Mkhedrioni militants into battle. But this did not help, and already on January 26, Georgian gangs were knocked out of the city. Tskhinvali survived.

There was still a year and a half of war, sacrifice, blockade, deprivation. But by this time the Ossetians had a quite serious military weapon, and the militia turned into a small, but brave and efficient army.

Something similar happened in August 1992 of the year in Abkhazia, which met the Georgian aggressors with several dozen AKS-74Us, Molotov cocktails and hunting rifles. And with this weapon they managed to withstand the first onslaught and resist.

“In the Shelkovskoy spring of 1992, by the“ Chechen militia ”all the hunting weapons were withdrawn from the Russian population, and a week later the militants came to the unarmed village. They were engaged in real estate registration. And for this, a whole system of signs was developed. Human guts, wound on the fence, meant: the owner is no more, in the house only women, ready for "love." Female bodies impaled on the same fence: the house is free, it can be settled, ”an eyewitness of those events using the pseudonym Sergey Maslenitsa described the results of the disarmament of the Russian population in Dudayevskaya Chechnya.

By handing over the weapon to the “militiamen” for safekeeping, the Russians condemned themselves to almost inevitable death at the hands of bandits. Unlike the Chechens, there were no powerful tapes behind them, and there was no one to protect them.

I know историяas a Russian resident of Grozny in the same terrible years, he managed to fight off the robbers, having a single-gun. “The old 12 single-gauge caliber was in service, but even this“ caramultuka ”was enough with its head. When from the extreme window towards the attackers, there were three of them, shots began to be heard, and the defensive person did not bring back fire, then the marauders, first bypassing the house, climbed over the fence, and after I continued firing from another window facing yard, just retired. In the morning I discovered an opened empty barn, but it was empty before they came, ”he described his“ battle ”. The robbers, even with an obvious advantage in numbers and weapons, convinced of the seriousness of the intentions of the failed victim, chose not to go under the shots, but to retreat.

And the owner of the gun (he, by the way, was taken away by the Russian police after the federal forces came to Grozny) survived and saved his family.

After the Khasavyurt "peace", a real shaft of criminal expansion struck the territory bordering on Chechnya, which turned out to be in full power of the bandits and religious extremists. Small but well-armed gangs crossed the administrative borders with Stavropol, Dagestan and North Ossetia, took hostages, hijacked vehicles, agricultural equipment, cattle, robbed houses. The chain of platoon strongholds of internal troops set up in the border area did not improve the situation much. At night, the "Vova" sat in a dull defense, practically protecting themselves. The local police simply did not have the strength to cover dangerous areas. So, for example, in the Right Bank ROVD of North Ossetia in 1997, there were only 120 employees. The situation was rescued by self-defense detachments and Cossacks, including armed with hunting carbines. They guarded the perimeter of the border settlements, exposed secrets on the most likely routes of penetration of gangs. In addition, mobile groups on off-road vehicles were constantly moving along the roads, patrolling the territory and being ready to come to the aid of secrets. These measures allowed to significantly protect the border areas.

Today, thank God, the “holy nineties” are behind, and genocide and ethnic cleansing no longer threaten the population. However, in our peacetime, the weapon sometimes turns out to be a real lifebuoy. It is enough to recall the events in Sagra, when only three guns helped people to stop an armed gang of six dozen militants who were going to smash their village. Or the incident on Deputatskaya Street in Yekaterinburg, which occurred in 2016, when three armed residents were able to repel the attack of 30 thugs who came to kill them.