US military parade: another attempt to rewrite history

March 30 2018
18
It is interesting sometimes to watch the military parade. See the faces of the soldiers and officers. Military equipment and weapons. Evaluate the alignment of military personnel. No matter how we treat military parades, no matter how we relate to the political structure of the state, the soldier who marches alongside his comrades in arms, causes a feeling of admiration. A sense of security if you want. 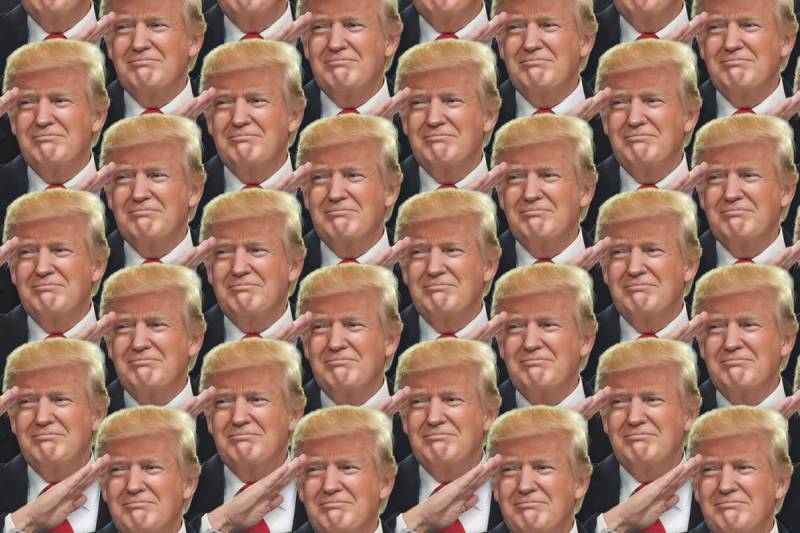 Exactly the same feeling causes and powerful military equipment. Crawling caterpillars, roaring engines, soot from the exhaust pipes ... Someone noticed these inconveniences in military parades? Dozens of tons of armor, dozens of tons of protection for children, women, old people ... Protection and retaliation for enemies.

No matter what the opponents say of holding military parades, any such action leaves in the soul of a simple inhabitant a legitimate sense of pride and involvement in the strength of their own country. Yes, and mine, albeit very meager, merit is in this strength. Let the cog, nut, posting, but there is. This is also me!

Military parade can work in the opposite direction. When the military power of their own country is perceived as a caricature. As a mockery of national pride and own state. Remember how much laughter is caused by military parades in the Baltic States. How do those who watch such a parade from the side of the streets react to the passage of troops?

I don’t want to make any analogies, but let's consider the military forces of states that often hold military parades. China, Russia, India and ... North Korea. Can anyone say that the armies of these countries are not powerful? What can any of these armies be defeated in a matter of hours, days, months?

It seems to me that American President Donald Trump was guided by these very thoughts when he offered to hold a military parade this year.

Officially, the decision to hold a parade on Veterans Day is explained precisely by the desire to show the American people the strength of their own army. What for? 27 years did not show - and suddenly ...

There is a more plausible explanation for this parade. Recall historical facts. More precisely, the date of the Veterans Day in the United States. 11th of November! And now let's recall the events that took place in the world that day and are somehow connected with the US Army.

The entire propaganda machine of the United States, which has been working for many years to create the image of the main winner of fascism for the United States, is stalling precisely because not only in Europe but also on other continents are still alive those who saw with their own eyes how and who fought in World War II.

But the variant of the main winner in the First World War suits Americans completely. As an interim. USA - the winner in all wars! Moreover, it even explains the upcoming budget costs. And for fierce Americans, this is really important.

So, for historical reasons, Russia does not seem to participate in this division of laurels. The Brest-Litovsk peace treaty, which is better known here as the Brest Peace Treaty, brought Soviet Russia out of the First World War. And not just brought, and put in the position of losing losers.

Thus, in the current political situation, it is fairly easy to choose the main winner. I will remind those who are considered winners: France, Great Britain, Japan, USA, Serbia, Italy. Anyone from the list of winners will risk challenging the lead in winning the United States?

Naturally, a simple question arises. What is it for? Is it possible to enhance the patriotic sentiment in the United States and European countries? For this, there would be enough media resources and diplomatic attacks that have been going on for several years. Then what is the need to exalt the role of the United States in the victory in the First World War?

The fact is that Western politicians are well aware that the actions that are currently being conducted in relation to Russia are fraught ... And they are fraught on both sides. It is doubtful that the "big float" may occur between serious countries such as Russia, the United States, Germany, France, Britain.

But there is also a gang of aggressive pugs like the Baltic troika, Poland, Ukraine ... And here the predictability from impunity is doubtful. Probably, some of the readers encountered such "monsters" on the street. It will jump out, the pant legs will jerk and - for the hostess ... And there the scandal is already with this same hostess.

Hence the need for the moral preparation of their own people for a big war. Do not worry, citizens and subjects, we have won this barbaric Russia always. And they always left the war stronger and richer! A terrible guess? Alas, terrible, but quite logical.

Now back to the beginning of the article. To my talk about parades. And about the wickedness of the Americans.

The Americans allocated as much as ... 30 million dollars for a military parade! Money for one or two people is huge. And for the parade? Even though the Americans refused to go through heavy armored vehicles.

See approximate costs? The parade in Russia costs hundreds of millions of rubles. Not a hundred, but hundreds. What is the sum of such amounts?

First of all, these are transportation costs, technical depreciation and maintenance of equipment and weapons. You must admit that nobody will do this for nothing. Any work must be paid. And not at Russian rates, but at US. Then, training of personnel, rehearsals and other preparatory activities such as the overlapping of streets and squares for night training are necessary.

And the parade itself is not only the passage of troops. This is a set of related volunteer services. From ensuring the safety of spectators and the payment of the work of the police and their equipment to the elementary payment of trucks for the transportation of personnel and weapons.

It is clear that President Trump will do his utmost to attract private investors to pay for expenses. Imagine how it would look like a military armored car with an advertisement for Coca-Cola or a hot dog.

In general, the very idea of ​​strengthening the faith of their own people in the invincibility of the army is good. Businessman Trump notably helps President Trump solve some problems. Everything would be fine if it were not for Trump politician ...

Something tells me that 11 November 2018, we will see inflatable boats on trailers and machine gunners in the Hummers already on American soil ... The main thing is not to forget to organize the historical part about the defeat of the wild Indians first settlers ...

Ctrl Enter
Noticed oshЫbku Highlight text and press. Ctrl + Enter
We are
Situational analysis of the death of the MH17 flight (Malaysian Boeing 777), made on the basis of engineering analysis from 15.08.2014Results of the week. “In our cooperative, the board is always agreed”
Military Reviewin Yandex News
Military Reviewin Google News
18 comments
Information
Dear reader, to leave comments on the publication, you must sign in.