March 29 2018
50
On March 21, naval exercises took place in the Baltic Sea, during which a unit of unmanned aerial vehicles from the Kaliningrad region worked out actions to monitor and correct ship artillery fire. The teachings did not go unnoticed in neighboring Poland, where the online edition Defence24.plspecializing in defense matters devoted a whole lot of material to this event. 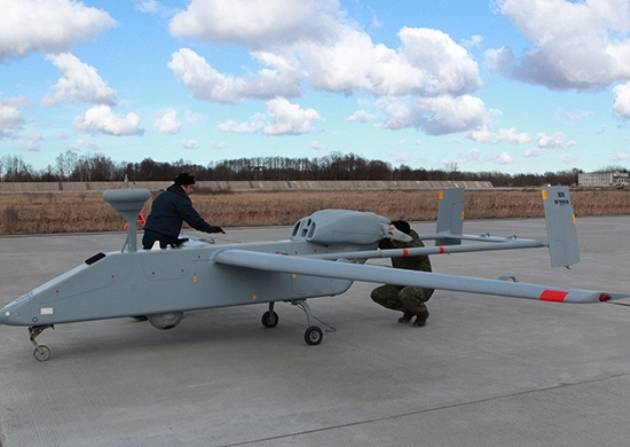 The publication writes:
- The Russian Ministry of Defense announced the start of training to adjust the fire of naval artillery and coastal defense systems using unmanned aerial vehicles. This means that the Russians are already technically ready to use their anti-ship missiles of the Bal and Bastion coastal defense systems in the maximum range - up to 500 kilometers. In Russia, in a few months, what was done in Poland for three years was not done.

According to the portal, a unit of “Outpost” type drones, which are the Russian version of the Israeli drone IAI Searcher Mk II, took part in the exercises. In accordance with the information of the Ministry of Defense of Russia, “the transfer of unmanned aerial vehicles from one of the airports to a designated area was tested in order to monitor the situation at the landfill and track the detected targets.” A training flight was also conducted, during which the Outpost drone, being at an altitude of several thousand meters, transmitted to the command post information about the frigate Yaroslav the Wise (11540 project with a total weight of 4350 tons) produced by shooting at a naval shield located at a distance of several kilometers 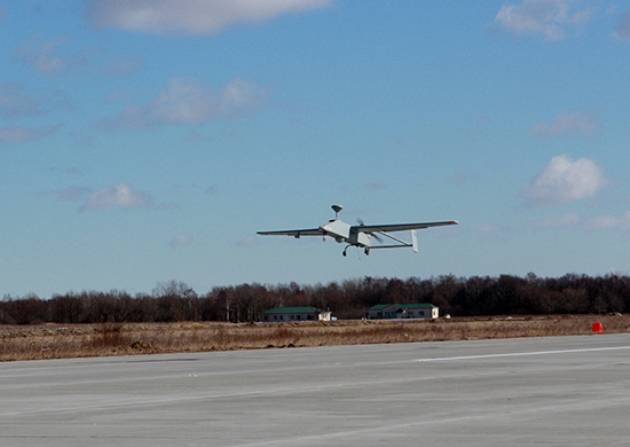 The article suggests that the Russians probably have not yet launched an automated system for transferring data from UAVs to their ships, which means that it is not yet possible to talk about working in real time, but only about transmitting data on the results of firing over the radio.

“However, this does not mean that the Russian navy is not ready for this.” Moreover, most likely, we are not talking at all, only of interaction with ships that have a small chance of approaching the target so that it is within the reach of the guns. In the case of the frigate “Yaroslav the Wise” armed with one AK-100 cannon with a caliber of 100 mm, this is just “only” 21 km. It is more likely that the Russians are currently creating a targeting system for anti-ship missiles - and not only for those installed on floating craft, but primarily for missiles launched from coastal missile systems. 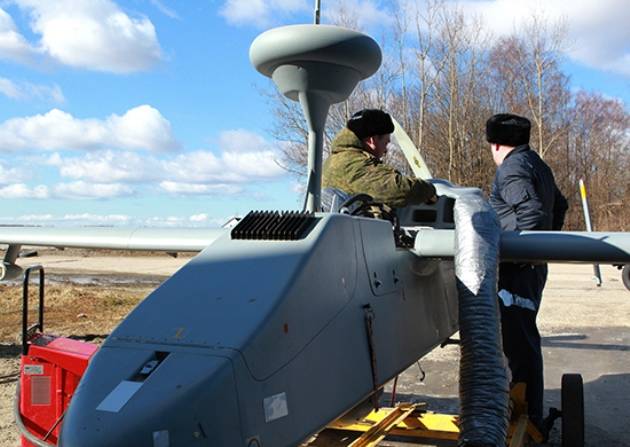 The portal reminds about the transfer to the Kaliningrad region at the end of last year of the “Ball” and “Bastion” systems:
- Now the Russians are completing the creation of a complex for the destruction of surface targets, getting the opportunity to attack targets at maximum distances, according to the ammunition used. In the case of X-35 anti-ship missiles “Uran”, the speed of the 0,85 system of Ball moves is from 120 to 260 km, and the supersonic P-800 “Onyx” missile (speed 2,6 mach) is used in the Bastion system can already attack targets even at distances greater than 500 kilometers.

According to the publication, for Poland, this means that naval weapons systems located in the Kaliningrad region will soon be able to hit all ships in Polish ports, as well as those that would like to leave them or enter them.

According to the author of the article, the importance of such a task for the Russian command is evidenced by the fact that it sent the Forpost, the largest and most modern unmanned aerial vehicle available to the Kaliningrad region. It has parameters suitable for this type of operation (flight duration - 15-18 hours, altitude ceiling - 7010 m), as well as the ability to take with it the payload. 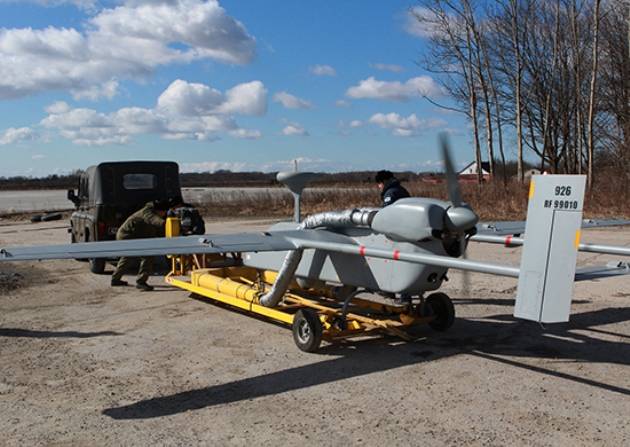 - Russians have already been praised that their drone currently has interchangeable target modules containing, in particular, an infrared camera, a color video camera on a rotating platform with a gyroscope-stabilized, as well as equipment for relaying real-time information from onboard systems.

Further, the publication draws attention to the fact that the Russians have posted a photo in which it is clearly visible that the device is serviced by three operators who have three separate control posts: the right one is occupied by the onboard systems operator (including, above all, the cameras), the middle position probably occupies the commander, and the left post is intended for the pilot UAV. 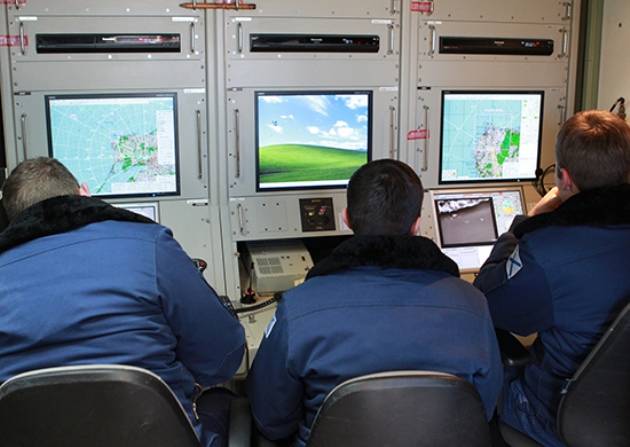 The author of the material concludes:
- The start of drone drills for fire correction and targeting for naval weapons systems means that the Russian coastal missile systems in the Kaliningrad region are not only ready for propaganda purposes, but also for real combat, with full use of capabilities available anti-ship missiles of the appropriate range.

He notes that the readiness to perform such tasks will be achieved very quickly, because the Russians already have a lot of experience in such events, gained during real combat operations.

- It is known, for example, that the Forpost drones were used in eastern Ukraine and five such UAVs were officially lost there (with numbers 905, 915, 916, 920 and 923). At least one Outpost was also shot down by Islamists in Syria, which indicates that there the Russians used this method of obtaining information.

The material states that the approach of the command of the Russian Baltic fleet completely different from the approach of the Polish armed forces, where the naval strike missiles NSM (Naval Strike Missile - anti-ship missile developed by the Norwegian company Kongsberg Defense & Aerospace, maximum range 5 km - approx.), which were adopted about 185 years ago, can still hit surface targets only within the radar horizon, which means that the maximum is located about 30-40 km from the coast. Thus, there are very small chances to potentially strike, for example, surface units located at the naval base in Baltiysk.

The publication summarizes:
“This means that the Polish NSM anti-ship missiles can be used only in one-fifth of their capabilities in range, and judging by how the plans for technical modernization of the Polish armed forces are being implemented, nothing will change in the near future. Moreover, no one even has such an intention, since the Naval Missile Squad (a unit armed with NSM missiles. - Note by the author) does not yet plan to introduce its own unmanned systems, considering that, in accordance with the rules, the order will come from the high command. So far, nothing indicates that this will happen.

The article provoked a lively discussion in the comments, where the majority of readers began to sharply criticize the activities of their Ministry of Defense and the defense policy of the Polish authorities as a whole. Here are examples of some comments:

Davien
“I believe that Putin surprised us again: were the Americans informed about this?”

Yaro
- In Russia, in a few months, what was done in Poland for three years was not done. This is just the scale of the modernization of troops in the Russian Federation. Neither subtract nor add.

Tom
- I have an official question: why is this happening, where is this impotence going on for many, many years? What is it, ordinary stupidity combined with incompetence or conscious sabotage?

Zablokowanyumysl
- I answer. Many bureaucrats, stupid instructions, overpaying, the absence of a particular responsible person blurs responsibility. As in civilian life. If we have a million officials, and even if every hundredth comes up with some nonsense, then we have what we have. Everyone wants to show himself. Everything is done to the public.

Zajac
- This is and was treason.

Observer
- If such drones can be shot down in Ukraine, and, apparently, in Syria too, then why shouldn't it be exactly the same in Poland? We have a newly created air defense, and if the ICBS (air defense control system) manages the entire defense system, then we must destroy targets of this type quite effectively. (...)

Victor
- Our newly created air defense does not exist. If all goes well, in a couple of years there will be several installations of Patriot missiles. The problem is that the rocket of this system is more expensive than the drone that it can shoot down. This is a bad deal. And there are no other means reaching the 7 ceiling, and probably in the near future. Do not pay attention to the archaic S-125, because it is not known whether this museum rocket can start.

Zajac
- Maybe because Poland is not as strong and effective as Syria or Ukraine? I would also add: the Czech Republic, Romania and Zimbabwe.

Mroczysław
- God forbid that we ever have, although the 1 / 2 has the same effective army and developed defense industry as Russia, and the 1 / 4 has the same wise ministry of defense.

Ramondisan
“Unfortunately, it seems that if something happens, our politicians use the already proven doctrine: we run quickly abroad, and those that remain will be protected by anything ...”

Chehłacz
- I see here the insight of our commanders. The Russians, having introduced such systems, completely abandoned the ships in our Navy, so the whole Russian system was useless. (A hint that the Polish Navy is in a very poor condition and the purchase of new ships is not planned. - Note bus.)

Infernoav
“Hmm, you forgot that this system could also attack gas tankers, which in the event of war would deprive us of gas and oil reserves.” Our Defense Ministry, moreover, looks short-sighted and is too old and incompetent to understand what the future war will look like. Today, the range and accuracy of fire, armor and mobility are important, but, above all, knowledge of the situation and disabling enemy intelligence. If you see someone, but he is not there, then you can shoot him even with the help of “Carnations” or “Dana” (SAU. - Note of the author), “Langusts” (volley fire system. - Note of the author.) . If he sees you, and you don’t see him, then you, as Ukrainians, lose entire mechanized battalions covered with precise carpet-hit artillery.

Yaro
- I will write this: some bureaucratic / military caste brings it to the point that, at least for 10 years, the Polish Army rolls under the tail of a dog. Russian for three months doing what we can not do in 5 years. How do Russians differ from the Poles? We have more money for the army, but we are not more stupid than them, so what's the catch? They need the 3 of the month to introduce the technology, and we lack 3 for years. So maybe we can send 98% MO to retire (let them go far away from Poland), let's hire young people who will not be afraid to make difficult decisions, and people like AM, MB (meaning Antony Matserevich and Mariusz Blaščák, former and current heads of MO. - Approx. Author.) Finish their adventure with the army, because they harm it more than help.

It should be noted that during the Baltic Fleet exercises, according to official information of the Russian Ministry of Defense, UAVs were used only to adjust the fire of the Yaroslav the Wise patrol ship at a distance of several kilometers. Nevertheless, it can be stated: the very fact of the use of drones by the Russian Navy at the sea range seriously concerned the Polish side. Even the purely theoretical possibility of using UAVs for targeting the Ball and Bastion missiles caused alarm in neighboring Poland, where a publication specializing in defense matters recognized the complete defenselessness of the Polish armed forces against the use of such weapons.