Branding, blocking, planting! Who will work for the good of Russia?

March 31 2018
176
Pretense brings together those who are bound by the mutual responsibility of hypocrisy.
Jean Baptiste Moliere

Opinion: in addition to the fight against corrupt officials and bribe takers in the ranks of administrations, fire and sanitary-epidemiological inspections, it is worthwhile to take for the scoundrels, alarmists. 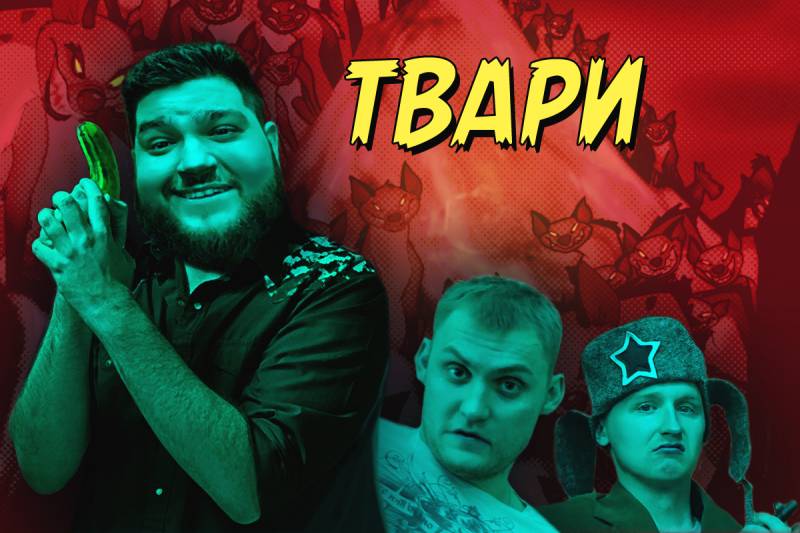 Especially for those who act under the guise of truths. For these - especially.

PR on blood - well, what could be worse? Moreover, it makes no difference whether it is political or personal, for money.

To brand, imprison, fine, block on the Internet.

How much meanness crawled out, how many reptiles of subculture hissed, just wonder.

And to call these organisms people simply does not turn the language.

But, nevertheless, the country is obliged to know their freaks. Not in the face, here these vile Hari simply have no right to be. So go through the list. Hit parade peculiar.

Scum of the highest category, and, unfortunately, a citizen of Ukraine. Find and crush this reptile will be problematic.

It was this animal that called the morgues and hospitals of Kemerovo, posing as an employee of the Emergencies Ministry, then the presidential administration. Sowed panic, talking about hundreds of corpses.

I think everyone will agree that Kuvikov is a rare beast and disgrace for Ukraine. But the fact that he had grateful followers. The same, in principle, but the citizens of our country.

I will give this flock just by numbers.

Two old-time scoundrels talked about "174 corpses in the morgue on Volgograd."

As evidence, a woman’s voice recording from the WhatsApp audio message.

The second unknown person told about 355 victims, the information “was handed over to her by the Ministry of Emergency Situations”.

This blogger compared the fire in the shopping center "Winter Cherry" with the accident at the Chernobyl nuclear power plant. If then the USSR authorities were silent about the scale of the tragedy, it means that the same thing is happening now, says Sobolev.

His main evidence is videos with audio recordings from WhatsApp messenger, whose origin and authenticity cannot be established. But this is not necessary Sobolev.

"Do you believe that all 60 people died, who are being talked about on television? I personally doubt it very much."

Parody of Sobolev. Without any additional comments and explanations, I showed two screenshots from some women in my video. One of them is supposedly the wife of the manager of a certain Moscow (!) Morgue, which, like the others, is the manager. for some reason flew to Kemerovo.

The source of these screenshots, their veracity and the adequacy of the authors - none of this Dviznov questioned.

Another videotrus who removed his libel.

I don’t know where they look in the Wild Jam advertising holding, the roof of this liar. But Broksh set a record. In the opinion of the video key, the victims of the Kemerovo tragedy are already more than 500 people.

Without any evidence. But the video has already been viewed more than 2 a million times, for the rest I don’t care.

Ivanov sentenced 400 people, without giving any evidence of this information, but emphasizing that the media would not tell about it.

For a change - stand-up comedian from Peter. This is really, who would say what ...

And, of course, how can you manage without Navalny on such a day and throw him down? Of course, the little ones rushed into battle ...

7. Anton Voloshin, head of the Navalny headquarters in Novokuznetsk.

What a clear confirmation! His friend says that "there was a movement" ...

8. Ksenia Pakhomova, head of the Navalny headquarters in Kemerovo.

Ksyushenka masterpiece! Maybe the namesake from Peter is giving lessons.

Tanks Ksenia forgot! How can tanks be without democracy?

What is characteristic: not one apologized for lies. At best - quietly removed. At worst - left. Hey hangs, it's not magic ...

Children, of course, need to flog. Yes, restore this time-tested practice, spitting on the newfangled introduction.

But these, from the point 2 to 5, clearly under the investigation. Article? 128.1, please. Not deadly, of course, but palpable for the budget. Both countries and these organisms. To lie was not learned. And earn blood.

And because of the young ...

The old ones are also handsome, there everyone was noted on the basis of “finding the truth”. Venediktov, Albats, Panchvidze, Petukhov, Varlamov, Rynska, Navalny, Sterligov ...

That is why, when it is necessary to work hard or something reasonable, good, eternal to sow, you cannot get them? And when trouble happens, as the toads climb from under the snags before the rain and shout.

The main thing, of course, is to grab yours. Loud roar about the bloody regime, mean power, and so on. The script is known.

Yes, the power in Kemerovo turned out to be crap. From the governor Tuleyev to those whom he will dismiss now. Judging by the shooting with Putin, in Kemerovo, only the prosecutor is sane. The rest can only memekat, and even then not very clearly.

But Albats and Venediktov are definitely not an option.

And these loud-voiced bloggers (soon the word will already become obscene) should also be pressed.

It may be necessary for Roskomnadzor to tear the backs off the chairs and work. But this again - it is necessary to WORK! The scale of the Internet space throughout the country!

No, I guess, Roskomnadzor will not have to rely on it. They will be fined for not writing for the thousandth time that ISIS is prohibited in the Russian Federation. And bloggers bloggers - this is below their dignity.

It's a pity. It is a pity that in Russia, despite the thousands of freeloaders from the budget, there is no one to deal with the purity of information.

Therefore, most likely, you will have to continue to endure this brown slush in the infosphere. Lies, lies and provocations.

P.S. Take care of children from these ... From the first point to the last.