Russia will not be the eternal whipping boy

March 30 2018
109
The Russian military-political leadership has dotted the “i” in defining its attitude to the events taking place in the world. 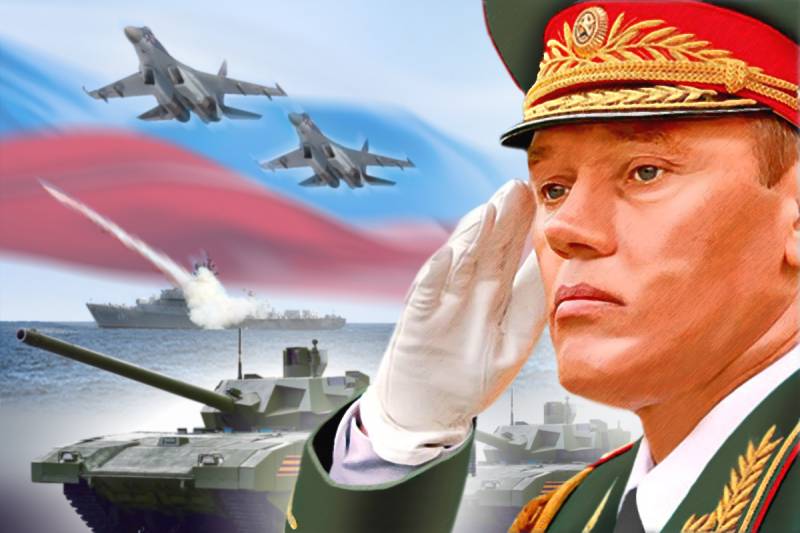 The statement of the General Staff of the Russian Armed Forces General of the Army Valery Gerasimov, who took place the other day, draws attention to the clarity of his assessments and the definiteness of his conclusions. It is generally in the nature of the military to express itself very specifically. For in war human life depends on the clarity of words very often.

But even military leaders in previous years were forced to take into account the ever-fluctuating "course of the party" and blur their assessments as much as possible, up to complete illegibility. At one time, the military doctrine did not even indicate who exactly is the likely military adversary for Russia! Imagine how to prepare an army for war without having an answer to the key question: with whom the war will be and what it will be like. Some ubiquitous terrorists! It was not clear why, to fight these unwashed barley men, to keep a million-strong army with thousands tanks, intercontinental missiles and nuclear submarines cruisers.

Judging by the current performance of the NGS, the time of vague uncertainty on this fundamental issue is over.

“Today, the determination of the United States of America to prevent the loss of“ global leadership ”and to preserve the unipolar world by any means, including the military, has a decisive influence on the development of the military-political situation in the world. This is contrary to the views of many states, including Russia, which does not accept dictates and advocates a fair world order. ”

Such a statement of the chief of staff can only mean one thing. In Russia, at the level of top state leadership, which the military is guided by, is completely determined with the current and future geopolitical situation. And on this basis they made a final conclusion about who exactly is the probable military opponent of the Russian Federation.

Further Valery Gerasimov said that “the sharply intensified interstate confrontation” has spread to almost all areas of modern life.

“As a result, interstate confrontation has sharply intensified. It is still based on non-military measures - political, economic and informational. Moreover, in addition to the mentioned areas, it gradually spread to all aspects of the activity of modern society - diplomatic, scientific, sports, cultural - and in fact became total. ”

The fact that in the report of one of the highest Russian military leaders there were mentions of such purely civil spheres of life as science, sport and culture, says first of all that the country's leadership does not build any illusions about, and unrelated "hostile manifestations in these areas. On the contrary, Moscow makes it clear that it has no doubt that all these areas are fully involved in the total confrontation of the West with Russia and are being used accordingly.

Such a smearing of geopolitical confrontation throughout the entire space of modern life should not be surprising. Since this is a direct consequence of the inability of the West to solve the “Russian question” in its traditional way of reprising rebellious countries - a direct military strike. And, at the same time, the ineradicable desire to "put the Russian in place."

Nonetheless, the recognition of all the above civil spheres as nothing more than spheres of a confrontation already under way with a clearly defined main adversary clearly indicates that the situation in these confrontational areas should be assessed in the context of the general struggle. In this sense, it seems correct to briefly consider the situation in each of them.

Political standoff. Here we should note both the great successes achieved by Russia and its president in the surrounding world, and the obvious internal consolidation of Russian society, which clearly appreciated the scale of the threats that have arisen. At the same time, it should be emphasized that, within the framework of the political track, the West continues to make tremendous efforts for the international isolation of Russia, the destruction of its Eurasian integration projects and the detachment of traditional allies from it.

The struggle in this field comes with varying success. However, it is impossible not to note some slowdown in the pace of Eurasian integration and, of course, the perfidious seizure by the West of the most important part of our original historical space, called Ukraine. At present, the adversary’s efforts in this area are focused on consolidating the achieved results and further driving wedges into relations between the Russian Federation and neighboring friendly states.

Economic standoff. The West makes full use of the type of raw material economy imposed by the Russian Federation in the 90s of the last century to its advantage. And through behind-the-scenes manipulations on world markets controlled by him, mainly energy, it may, for the sake of its interests, negatively affect the state of the Russian economy. So, for example, after the start of Ukrainian events, Russia's GDP fell by almost one fourth (about $ 500 billion), due to the so-called and allegedly “spontaneous” recession of world oil prices. However, the speculation that the West had nothing to do with it, and the invisible hand of the market supposedly worked here, does not explain the fact that these attacks against Russia follow precisely those historical moments when she has the courage to argue with the West. So it was before the collapse of the USSR, it happened now.

We should not forget that the stake in this game for the West is the preservation and consolidation of its world dominion. In particular, by “lowering” and further plundering Russia. Given the absolute priority of this task, no time costs in terms of, for example, reducing the profitability of shale gas production in the United States or an unqualified number of billions in the Saudi treasury cannot be considered excessive.

As long as Russia's dependence on energy exports to the geopolitically hostile West will play a significant role in the stability of the Russian economy and society, Moscow will remain extremely susceptible to its political pressure at any moment when it deems it necessary. In such a situation, it is better to immediately forget about building a strong and bright future for Russia and the Russian people. Thus, a radical correction of this unacceptable situation is, by definition, the alpha and omega of Russian politics.

Information confrontation. I will say it in no uncertain terms - this is exactly the front on which modern Russia is losing the most so far. The complete ideological and moral capitulation to the West and its fake "values" that occurred in the early 90s of the last century as a result of the collapse of our own country, the Soviet Union, became a breeding ground for cultivation in our public consciousness, calling things by their proper names, almost subservient bow to the West. As before some absolute perfection, which reached humanity in the process of its development.

First of all, it is a rude and shameless lie. The Western social, or rather, antisocial model based on the elements of the so-called “free market”, which turns human society into a pack of completely primitive individuals, who constantly gnaw and persecute each other, is as ideal as an “American” mercenary. Poroshenko as president of Ukraine. A total endless struggle for a piece fatter, not tolerating any obstacles, in the conditions of the planet, with increasingly limited resources and increasing population is the way to a complete and possibly deadly deadlock.

Nevertheless, despite the obvious deceitfulness and abnormality of the Western way of life, its imposition over a quarter of a century through the "democratic" media completely controlled by the West led to the emergence of entire generations and segments of society that are extremely far from state and collectivist principles, without which effective defense, and the very existence of the country. It is worth recalling that Adolf Hitler considered the defeat of the enemy on the ideological and information fronts as a guarantee of his military victory. Thanks to this sequence, he captured almost the whole of Europe in two years.

All the other areas of confrontation with the West listed by Valery Gerasimov diplomatic, scientific, sports, cultural, are, in fact, derived from the above. However, as we all know, it is the pressure in such areas as, for example, in world sports that becomes almost the main one, given their enormous social significance. The West, no doubt, is increasing pressure in this area precisely in order to maximize the demoralization of the Russian population, quite in the spirit of the attitudes that the Nazi Führer formulated.

There is no doubt that sport will be sacrificed without hesitation to the geopolitical interests of the West and there will be no end to the attacks on Russia in this area. Each international competition, scheduled in the Russian Federation, will be the reason for all sorts of prohibitions and boycotts, and Russian athletes - the object of the most unbridled psychological terror. And even direct bullying, comparable in terms of cynicism with those that the Nazis allowed themselves to do with the Russians.

As long as the West pursues current geopolitical goals, and it will pursue them as long as it exists on this planet, it will have no other approach to Russia. You can not even count on it. And in this sense, if we do not want to see Russia as an eternal whipping boy in the same sphere of world sport, we must get out of this vicious circle of endless humiliations. It is even possible due to the complete withdrawal of the Russian Federation from those organizations that have completely compromised themselves as a cover for anti-Russian special operations of the West.

This is, in particular, launched in some CIS countries by the seemingly completely absurd and unnatural campaign to translate local languages ​​and adverbs from the Cyrillic to the Latin script. Thus, long-term processes are launched that, over time, will lead to the already irreversible withdrawal from the sphere of influence of Russia of vast territories and massifs of the population. Meanwhile, from the point of view of the military-political adversary, the less the Russians have left their lands, resources and people, the higher their chances of a final victory. Therefore, cultural issues are just as hugely strategic for the country's defense, as are issues of supplying the army with ammunition. And the Chief of General Staff is absolutely right when he puts these things practically in one row.

Returning to the speech of Valery Gerasimov, I can only say that his clear and very specific definitions are of great importance for all who are not indifferent to the fate of Russia. They give a true guide to the future and an understanding that there is nothing accidental, spontaneous or unrelated in this world.

Ctrl Enter
Noticed oshЫbku Highlight text and press. Ctrl + Enter
We are
Situational analysis of the death of the MH17 flight (Malaysian Boeing 777), made on the basis of engineering analysis from 15.08.2014Strangulation: the context, conduct and consequences of the American naval blockade of China
Military Reviewin Yandex News
Military Reviewin Google News
109 comments
Information
Dear reader, to leave comments on the publication, you must sign in.