Ukrainian workers will save the economy of Poland

March 29 2018
22
The other day, Polish Deputy Foreign Minister Bartosh Tsihotski at the XI Europe-Ukraine Forum in Polish Rzeszow spoke about the sharply increased contribution of Ukrainians working in Poland to their country's GDP. According to Tsikhotsky, who relies on Polish statistics, in the 2017, Ukrainians working in Poland transferred more than 12 billion zlotys to their homeland. “This is my humble call for positive changes in this direction. To understand the scale of this phenomenon, you must understand that in the 2016 year, according to estimates, Ukrainians working in Poland sent about 8 billion zlotys to Ukraine. In the 2017 year - more than 12 billion zlotys. This is equal to 3 or 4% of Ukraine’s GDP. This is a huge amount of money - it means that a huge number of people from the Ukrainian side are engaged in activities in our economy ", - stressed Polish diplomat. 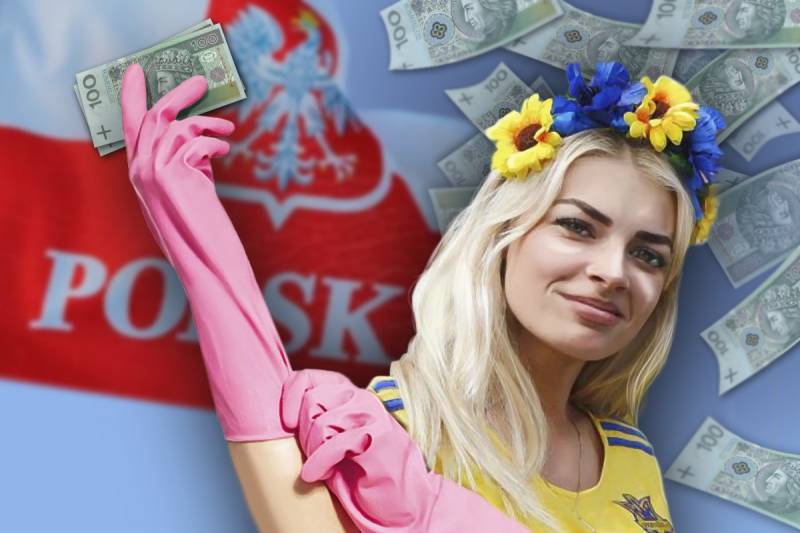 From private trips to transfers to billions of zloty

It should be noted: the figure given by Tsihotski is one and a half times larger than the amount of money transferred from Poland to Ukraine, recorded a year earlier. In 2016, the foreigners, as Ukrainians call their compatriots working abroad, sent home about 8 billion Polish zlotys.

Experts explain such growth by the visa-free regime introduced last year with the European Union. President Poroshenko then boasted that now the Ukrainians had the opportunity to fly to the Viennese opera without any problems, and at the same time to drink a cup of European coffee in the Austrian capital.

The reality was much simpler. Instead of the Vienna Opera, Ukrainians rushed to Europe to earn money, although the agreement on a visa-free regime does not imply the right to work of people entering Ukraine from the European Union. But there are a lot of shadow schemes for temporary employment.

They are especially developed in neighboring Poland. After the country's accession to the European Union, a rather difficult demographic situation developed in it. Many Polish citizens moved to live and work in the rich countries of Old Europe. The problems were marked by the noticeable aging of the Polish population.

All this led to a shortage in the labor market in Poland itself. Suffice to say that today, “in a country with a 38-million population, only 16 million people work,” is the assessment of the head of the National Bank of Poland, Adam Glapinski, which he sounded when summing up the year.

The government in Warsaw is trying to fill the hunger for its economy with the resources of Ukraine and Belarus. Therefore, they turn a blind eye to the use of temporary work by Ukrainians who have been entitled only to visa-free entry. They are employed on Polish farms, in greenhouses, they harvest apples and strawberries on open plantations, and work on construction sites.

According to statistics on the Polish labor market are employed from 1 million to 1,5 million of citizens of Ukraine. This is taking into account those who work illegally, without the appropriate permissions. Polish authorities recognize "some violations" in the employment of Ukrainians. Only here the Polish customs gives completely different numbers.

In 2017, ten million Ukrainians entered Poland (9 990 978 people). This is twice as much as the Russian Federation has adopted (4 376 423 people). Since the Ukrainians, for the most part, have entered the territory of Poland as private trips, we will assume that they moved in, drank coffee, and for dessert - billions of Polish zlotys were sent home.

Economic growth will be ensured by foreign workers.

The temporary nature of employment led to the work of the lowest qualifications. This is evident from the results of a poll promulgated by the sociological group Rating. As admitted, 77% of Ukrainians who visited Poland (many went there two or three times a year), their neighbors “did mostly physical work, 16% worked in the service industry, 3% had work related to intellectual activity, and only 1% worked in leadership positions. "

These results are directly correlated with the method of employment in Poland. According to information voiced on the Money program by President of the All-Ukrainian Association of International Employment Companies Vasily Voskoboyniky, this year “the number of issued work invitations for Ukrainians in Poland has already exceeded 1 million 700 thousand, and only 12 396 people have been employed through legal companies” .

At the same time, more than half of the respondents from the Rating group explained the choice of Poland as a place of employment by its geographical proximity and higher wages. Equally important is also the "presence of family members or acquaintances" already working in Poland, and a low language barrier.

So, in the conditions of the civil and social crisis in Ukraine, employment in Poland became for Ukrainians (especially from the western regions of the country) an opportunity to more successfully survive difficult times. Although in Poland, many have not sweet.

Official statistics do not indulge society with the problems faced by the workers living on the ground. Meanwhile, the media is full of stories about the poor fellows about how they were not paid in Poland for the work done, how they have withdrawn their wages in compensation for the fines that the smart employers invented there, etc.

Among all these scams and bullying, human trafficking stands apart. Last year in Poland revealed more than a hundred such cases. “We, Poles, often like to think of ourselves as tolerant people, honest and those who do not use others,” says Anna Garner from the National Interventional Advisory Center for victims of trafficking. - But reality looks a bit different. The victims of human trafficking in Poland are often citizens of other states who come to us to earn money. I mean the Ukrainians working in Poland, and a significant number of whom work illegally. ”

Last year, according to Garner, the center assisted two hundred people who had been subjected to this type of violence in Poland. “Employers (that is, human traffickers) were forced to engage in prostitution, seventy-two people, seventy-one people were forced to slave labor, and twenty-seven people were begging.”

Against the background of these outrages, it is difficult to imagine that Poland is interested in engaging employees in its economy. Meanwhile, she is not just interested, but in dire need of attracting foreign workers. According to the estimates of the Polish Union of Entrepreneurs and Employers, today, to ensure stable economic growth in Poland, at least 5 million additional employees are required.

Moreover, we are talking not only about doing simple physical work, which today involves the majority of visitors from Ukraine. As Adam Glapinski, already mentioned here, noted, during the last years in Poland there has been an acute shortage of qualified personnel — engineers, doctors, IT specialists, etc.

Polish universities have already involved graduates of Ukrainian schools to prepare them. The conditions of employment in Poland are also changing. Paid permits are introduced, the conditions for registering statements of intention to get a job change. The authorities in Warsaw are now openly demonstrating support for Ukrainian citizens who come to Poland to work and study.

Deputy Minister Tsihotsky also calls on the officials of the two countries to hold consultations at the level of the Ministry of Labor and Social Security in order to streamline the movement of labor resources and introduce new protective mechanisms for Ukrainians working in Poland.

Only it is hardly necessary to be deceived by the high contribution of the workers in the Ukrainian GDP, as if it has some long-term prospects. A survey of the Rating group showed another result: the overwhelming majority of the respondents (74%) stated that they “do not plan to move to Poland for permanent residence in the coming years.”

This means that the Polish economy will keep on the influx of Ukrainians as much as the political and economic chaos in Ukraine will last. Then the economic problems of their country will have to be solved by the Poles themselves.

Ctrl Enter
Noticed oshЫbku Highlight text and press. Ctrl + Enter
We are
You remittance, or about the leading countries in the transfer of funds from Russia to RussiaResults of the week. "Who you are lucky, in fact, and will carry a cock, and such a bird as you, I, too, will rush!"
Military Reviewin Yandex News
Military Reviewin Google News
22 comments
Information
Dear reader, to leave comments on the publication, you must sign in.