March 28 2018
6
The Russian Ministry of Defense informs that since the beginning of the humanitarian pauses, with the assistance of the Russian Center for reconciliation of the warring parties, more than 128 thousand left the Syrian Eastern Guta 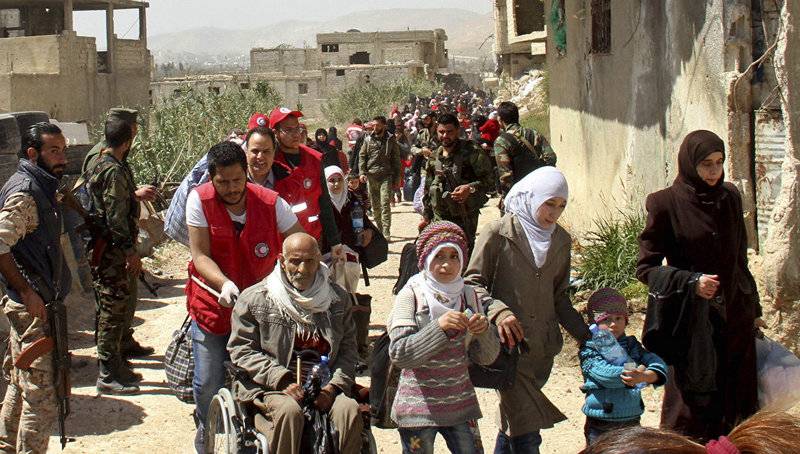 Since the beginning of the humanitarian pauses from East Guta, with the assistance of the Center, more than 128 thousands have been organized. The humanitarian corridor in the village of El-Vafidin with the assistance of the Center continues to withdraw civilians from the city of Duma. In total, with 28 February, more than 25,5 exits thousand people were organized from this settlement
- Reported in the military.

On the website of the military The broadcast continues from surveillance cameras in the areas of humanitarian corridors and from the drone that accompanies convoys of militants who left Guta and follow from Arbil to Idlib.

After 24 adopted February the UN Security Council resolution 2401 calling for the cessation of hostilities in Syria on the initiative of Russia in Eastern Ghouta, a five-hour daily pause was introduced in February from 27 in February. In the early days, the pauses were frustrated by the militants, but later the situation stabilized, reports TASS

Ctrl Enter
Noticed oshЫbku Highlight text and press. Ctrl + Enter
We are
The flow of civilians from East Guta does not stop
Military Reviewin Yandex News
Military Reviewin Google News
6 comments
Information
Dear reader, to leave comments on the publication, you must sign in.