"Remember that you are mortal!"

April 6 2018
102
Already in ancient times, namely in the Paleolithic era, people formed three groups of mystical beliefs that were included in all the major religions of the world - animism, totemism and magic. “My soul is singing!” Is animism, the names Volkov, Sinitsyn, Kobylin are totemism, well, the well-known student “freebie come” is typical, albeit a very primitive magic. Well, ceremonial helped people to live in the complex world of spirits and gods. Holidays in honor of the gods and goddesses were to appease them. The victims, sometimes bloody - to feed. And, of course, all these ceremonies strongly acted on the “common people”, inspired him with obedience or, on the contrary, forced him to exult when it was required of those in power. 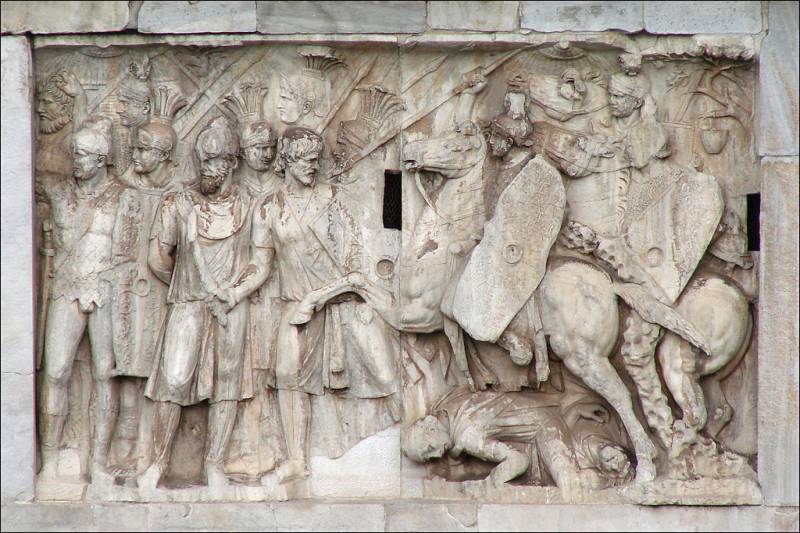 For historians, it is very important that in the era of the empire, Roman emperors not only arranged triumphs for themselves, but also began to build triumphal arches in honor of their victories and decorate them with bas-reliefs telling of these victories. For example, one such bas-relief from the triumphal arch of Emperor Constantine in Rome. It shows extremely accurately the equipment of the Roman soldiers of this time, including the trousers of the marriage. Of particular interest is the extreme left legionnaire. He is wearing a metal scale armor with a notched hem and for some reason is so short that he barely covers his “causal place”. One can clearly see his helmet, shield and sword in a sling on the right.

A special role was played by the ceremonies in the war. All oaths there on the sword, on blood, kissing banners and standards should symbolize a kind of “covenant” with both the patron gods and the commanding fathers, whose power over the souls and bodies of their soldiers was illuminated by divine authority. The more complicated a society is, the more difficult its ceremonies are, as a rule. In the Ancient World, the Roman ceremony connected with the celebration of victory reached its peak. Here the worship of the gods, who granted the victory to the Roman, merged into one arms, and the glorification of the warriors who obtained it, and the public reward to the commander for all that he did for the greatness of Rome. 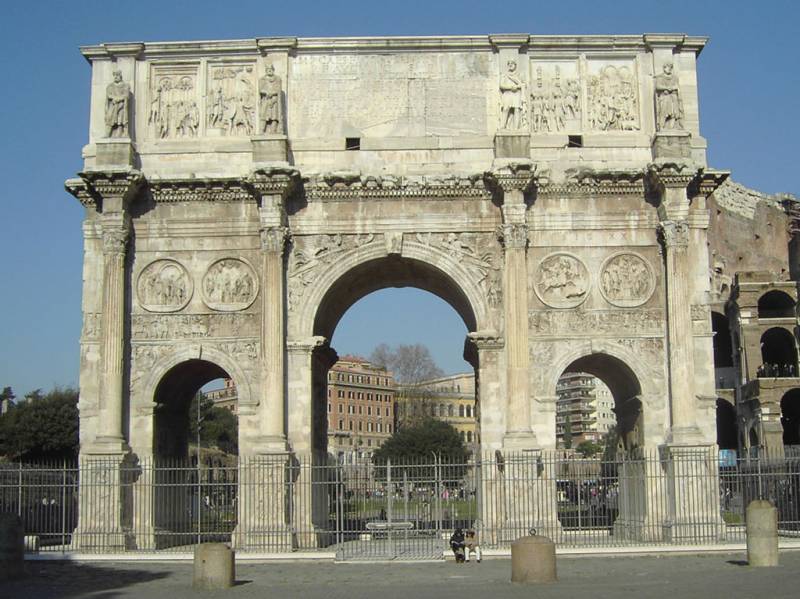 Column of Constantine. It is fenced, and you can not get closer to it. Well, the upper bas-reliefs can only be removed with the help of a quadcopter.

All this was embodied in triumphs - festive processions dedicated to the victories of the Roman army upon his return home. At first, everything was pretty simple: upon entering the city, the soldiers went to the temple and brought thanks to the gods for giving them victory and sacrificing part of the captured booty to them. But then the triumphs turned into grand processions (and many centuries later, when Rome had long since fallen, into no less grand military parades with the passage of troops, tanks and rockets). 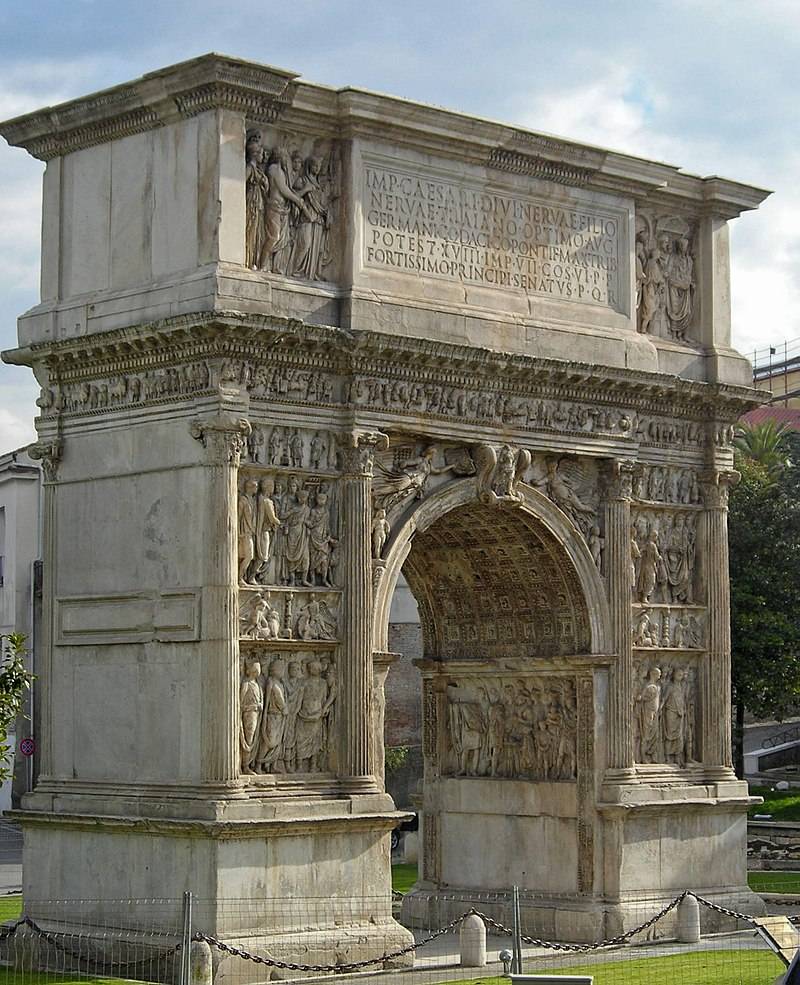 But if at the beginning of the holiday was the return of any troops to Rome. So over time, the triumph became a kind of difference and was allowed under the presence of a number of conditions. Triumph was considered the highest reward for the commander, which he could deserve only if he had a Senate baton - imperium (lat. - power), which gave him the broadest powers, and waged a war without submitting to the power of another commander. However, Roman democracy allowed rewarding with triumph and ordinary officials (consuls, praetors, proconsuls and propretors), the dictator and those who were granted the highest authority (imperium extraordinarium) could receive it by a special resolution of the national assembly. Usually, the senate decided to be or not to be triumphant. But sometimes, if he refused to the commander in triumph, he could get it by contacting the people's assembly. This happened, for example, in the case of Martius Rutil (the first of the plebeians, who became a dictator and won the triumph in Rome). 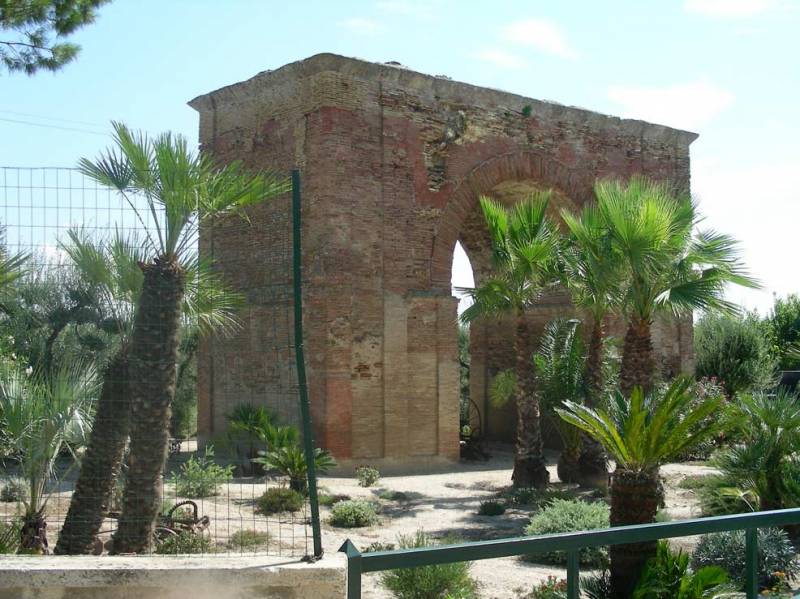 Arch of Emperor Trajan in Canosse.

Triumph was given to the commander only when the war was over (although, as always, there were exceptions). In addition, the victory in it itself was bound to be accompanied by a battle that would lead to great losses in the enemy troops. The rule was this: to give triumph only if no less than five thousand enemy soldiers are killed in it.

The commander, who wanted to get a triumph, had to send a "request" to the Senate and wait for his decision, being certainly outside the city limits, since the official, who did not lay down the imperium, was not allowed to enter the city. The senators also held a meeting on the Field of Mars, that is, outside the city limits, in the temple of the goddess Bellona or the god Apollo, where they considered the request of their commander to give him a triumph. On the day when the triumph was appointed, all its participants had to gather early in the morning on the Field of Mars, where a victor arrived in one of the public buildings (villa publica) dressed in luxurious clothes. Interestingly, in his attire, he resembled the figure of Jupiter Capitoline - a statue on Capitol Hill. This “costume” consisted of a tunica (tunica palmata), embroidered with palm branches, in the same purple-colored toga pieta. Kaligi boots, the type of soldier's shoes, were of red leather and finished with gold. In one hand he had to hold a bay branch, and in the other - an ivory scepter, the top of which was a golden eagle; the head of the victor has always been decorated with a laurel wreath. 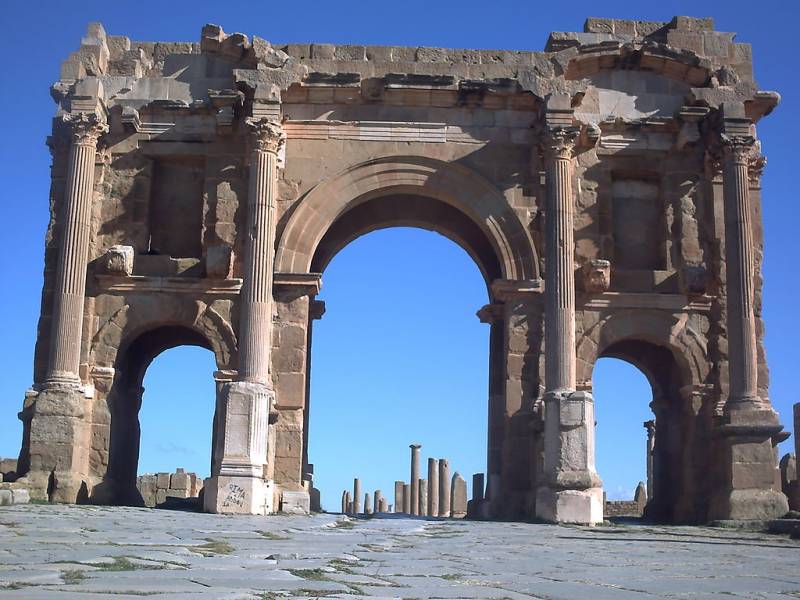 He had to enter Rome on a round gilded chariot-quadriga, drawn by four white horses. When the victor Camille first appeared on a chariot drawn by white horses, the public greeted it with a murmur, since white horses were a symbol of the deity, but then they became an ordinary phenomenon. Sometimes horses were replaced by elephants, deer and other rare animals, connected, so to speak, to the place of victory of the victor. Thus it was the triumphal chariot that represented the center of the procession. However, its democratic nature was emphasized by the fact that senators and magistrates were ahead of it, and trumpeters who were blowing loudly into silver or gilded pipes were behind them.

Along the entire long road along which the procession moved, the inhabitants of the Eternal City crowded, eager for bread and circuses, in their best clothes, with wreaths of flowers on their heads and olive branches in their hands. Naturally, many sought to see their loved ones returning from the march, but that part of the audience in which the trophies they had seized followed the chariot of the victor were of particular interest. 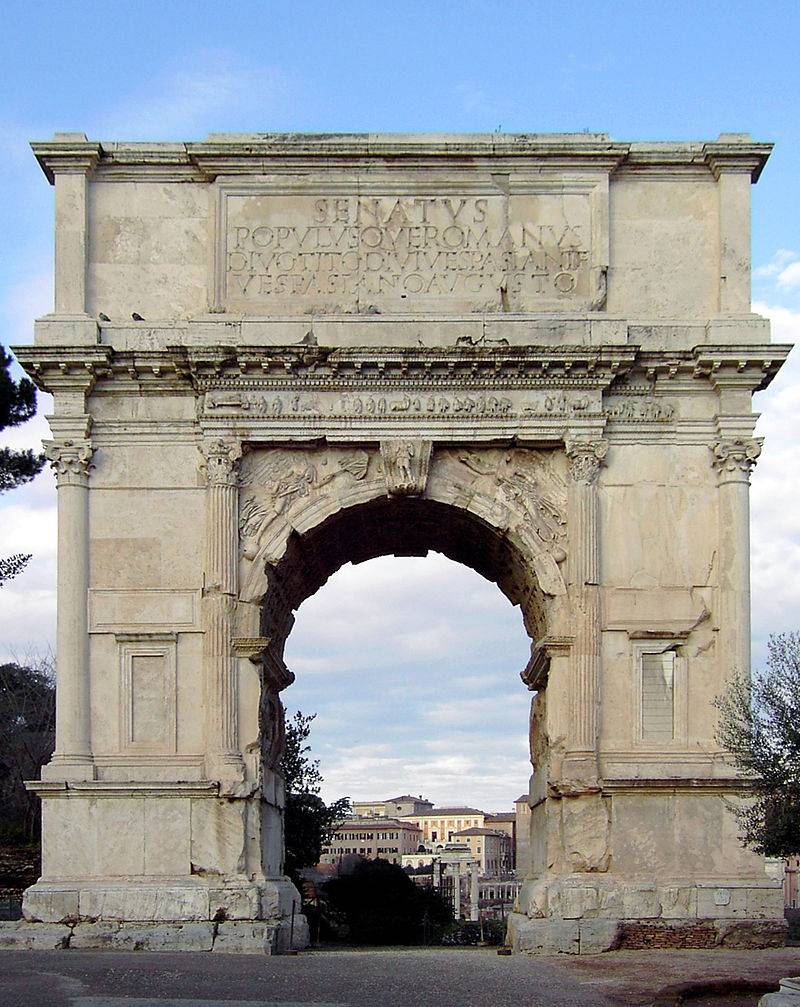 In ancient times, its stories Rome fought with its neighbors, people as poor as the Romans themselves. Therefore, they had the simplest trophies: weapons, cattle and prisoners. When Rome began to wage wars with the ancient and rich countries of the East, the winners began to bring so much prey from there that the triumph dragged on for two or three days, and Trajan’s triumph in 107 was so lush that it lasted 123 days. On special stretchers, carts and simply in the hands of warriors and slaves carried and carried captured weapons, banners, models of cities taken and fortresses, and statues of defeated deities, captured in the ruined temples. Together with the trophies, they carried tables with texts telling about the exploits of the Roman weapon or explaining what, in fact, are the objects carried to the public. Sometimes it could even be different unseen animals from conquered countries, and rare works of art. It is not surprising that a huge amount of artistic treasures, precious dishes, gold and silver coins in vessels and ingots of precious metals were exported from Greece, Macedonia and other countries of Hellenistic culture. They carried in the procession also golden wreaths that the victor received in different cities. So, during the triumph of Emilia Pavel, these wreaths were 400, and Julia Caesar was presented in honor of his victories over Gaul, Egypt, Pont and Africa ... around 3000! And this is not for all named victories, but for each of them! 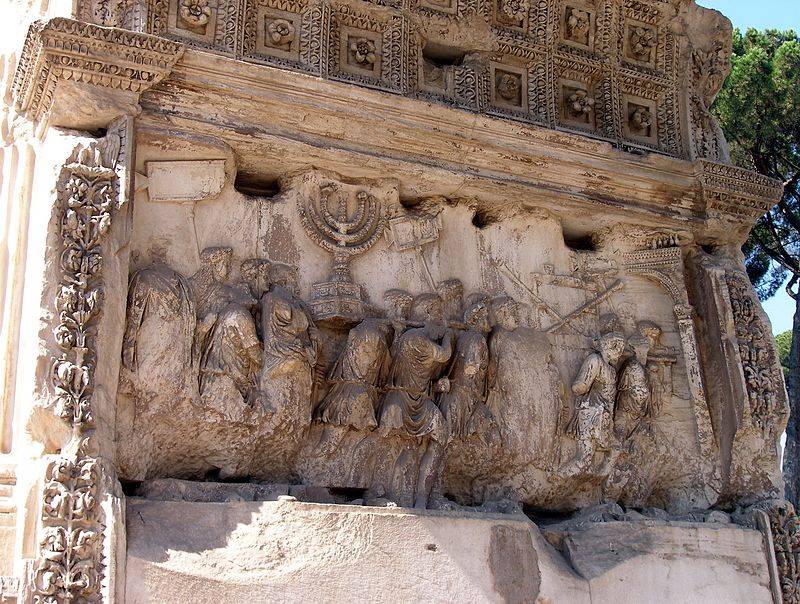 The bas-relief from the arch of Titus Flavius ​​Vespasian, depicting a triumphal procession with trophies from the captured Jerusalem.

White sacrificial bulls with gilded horns, decorated with flower garlands accompanied by priests and young men in white tunics and also with wreaths on their heads, proceeded without fail in the procession. But perhaps the main decoration of triumph in the eyes of the Romans were not bulls and captured trophies, but ... noble captives: defeated kings and members of their families, as well as their entourage, and enemy commanders. Some of these captives were killed on the orders of the victor during the triumph in a special prison on the slope of the Capitol. In the early era of Roman history, the killing of prisoners was the most common occurrence and had the character of human sacrifice. However, later the Romans did not abandon this custom. That was how the king of Yugurta and the Gallic leader Vercingetorix were killed. 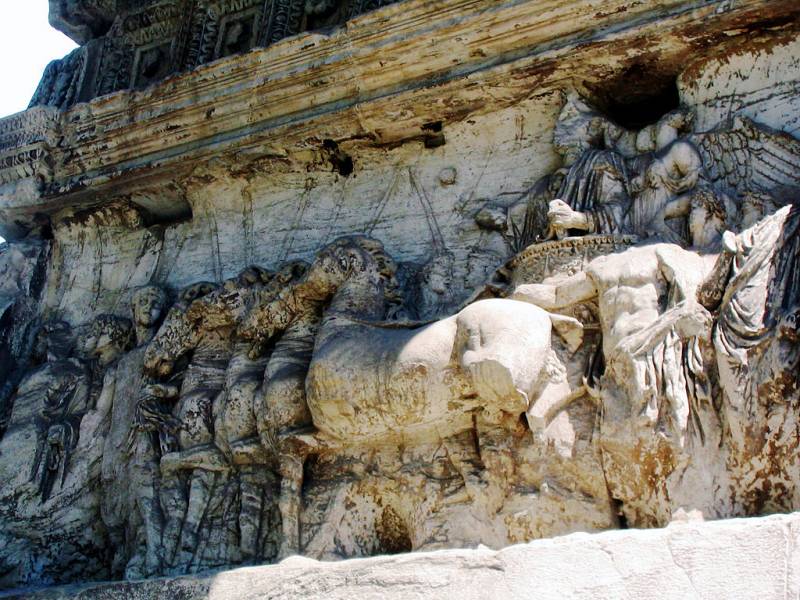 Titus Flavius ​​Vespasian on a quadriga during the triumph.

Demonstrating to all the power of the victor, in front of him were the lectors with fascias entwined with laurel branches; along the procession, the jesters and acrobats, making fun of the crowd, ran. And it is interesting that the victor in his chariot was not one, he was surrounded by specially recruited children and his relatives, who demonstrated the presence of close family ties, which were highly valued in Rome. It is also known that behind the triumphant there was always a state slave who held a golden wreath over his head and from time to time whispered in his ear: “Remember that you are mortal!” His main assistants, legates and military tribunes, and sometimes and Roman citizens released from enemy captivity. And only after all this, legionnaires in ceremonial gear and sultans on helmets entered the city, demonstrating their awards received in battles. They sang funny songs, in which they were allowed to ridicule the shortcomings of the victor, than they once more hinted to him that he was also a man, and not a god! 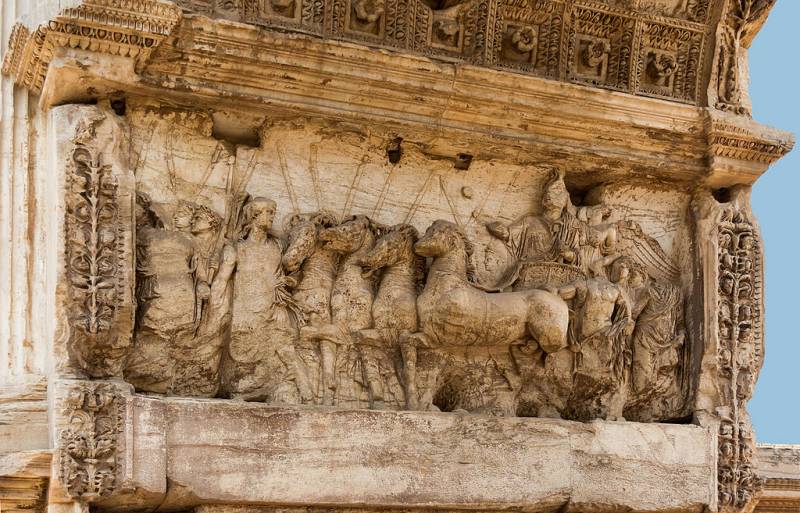 Another view of the same bas-relief.

Starting on the Champ de Mars, at the triumphal gates, the procession moved further through two circuses: the Flaminiev circus and the Maximus circus (“Big”), and then along the Sacred road and through the forum went up to Capitol Hill. Here, to the statue of Jupiter, the victor of the victor folded the laurels of his fascias, and he himself brought a magnificent sacrifice. Then there was a feast of magistrates and senators, and often also soldiers and even the entire assembled public, for which tables were set up along the streets, and bulls and rams were set right on the streets. The gladiator games were part of the “program”. Sometimes the commander handed out gifts to the public. Gifts to the soldiers were the rule and were sometimes very significant. For example, Caesar paid out some five thousand denarii to his soldiers. Those who were awarded the triumph were entitled to wear triumphal attire during the holidays, which was also one of their privileges. 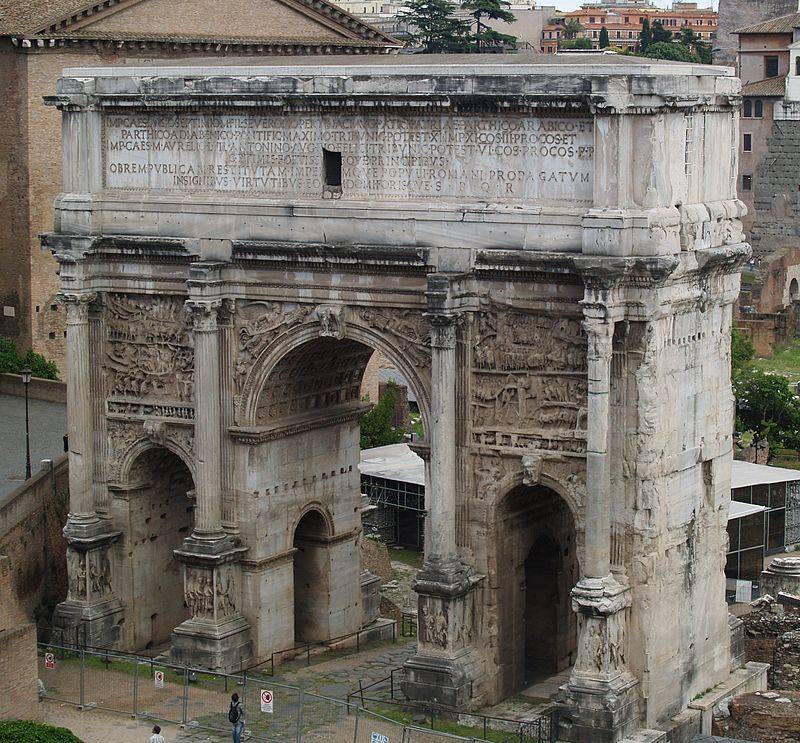 Triumphal Arch of Septimius Severus on the Roman Forum.

In the era of the empire triumphs became the property of emperors alone. They did not want to share glory with anyone, sometimes allowing triumph except for their closest relatives. The commanders were allowed only to wear a triumphant attire (ornamenta, insignia triumphalia) and install their statues among the statues of previous victors. However, they could not complain. After all, officially the emperor was commander in chief and, therefore, the commander acted on his behalf and under his command.