How to fix on samurai sashimono? (Part two)

April 4 2018
30
But there was a problem with the individual identification of the samurai. How to find out who of them is who, if they all, for example, fight under one nobori or ten, and the whole army goes under the banners of traditional khat-jirushi? The solution was found in the placement of the flag with the monomine behind the samurai! Such a flag represented a reduced copy of the nobori and received the name sashimono. The same sashimono with the emblem of the daimyo received asigaru-arquebusier, archers and spearmen detachments and immediately it became much easier to distinguish them on the battlefield, but the samurai had different sashimono emphasizing their status. Their units stood out only by Nobori, so that their number also began to grow! 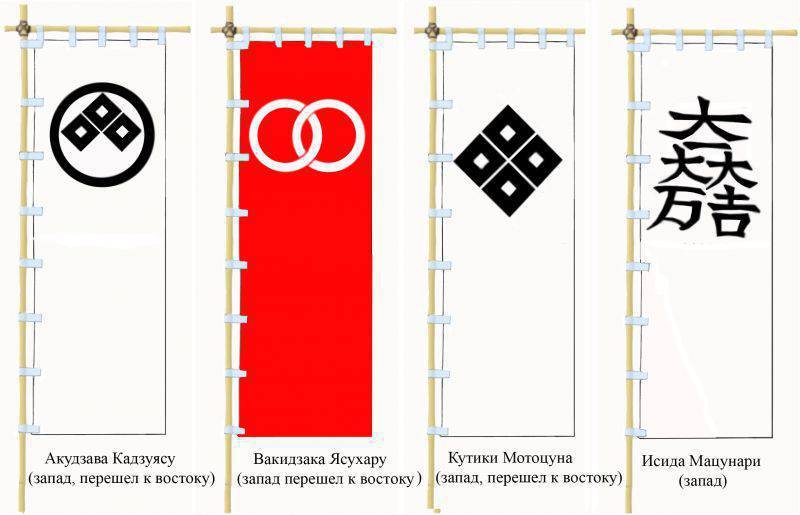 Nobori participants in the famous Battle of Sekigarakh - "traitors" and the commander of the army "Western". 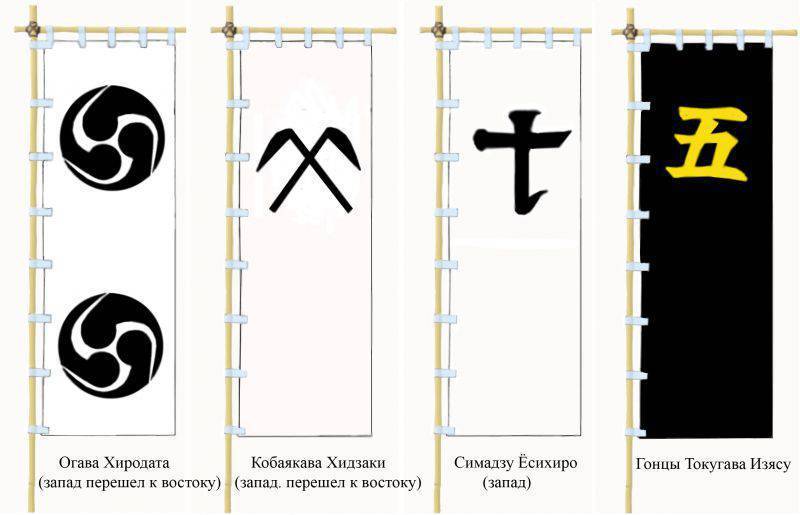 Nobori participants in the famous Battle of Sekigarah - "traitors" and messengers Ieyasu Tokugawa.

Ashigaru Sashimono was very simple. For example, the ashigaru of the clan Yi has a simple red cloth.

Very soon, however, the usual flags were worn behind the back of the samurai ... "somehow not interesting." They needed to stand out at all costs, including their appearance. Therefore, their sashimono acquired a completely extravagant appearance. First of all, they became volumetric. But since such a sign could not be by definition, then they began to make them from paper, feathers and fur. It could be two or three fur balls on a bamboo rod of a different color, a pole, with prayer plates of ema or a figure of ... a bear or a crane hanging on them. Sashimono is known in the form of “rice pestle”, “anchor”, “lamp”, “umbrella”, “fan”, “skull”. That is, the fantasy of their creators was truly limitless. Moreover, very often the samurai mon was one, but the sashimono portrayed something completely different. 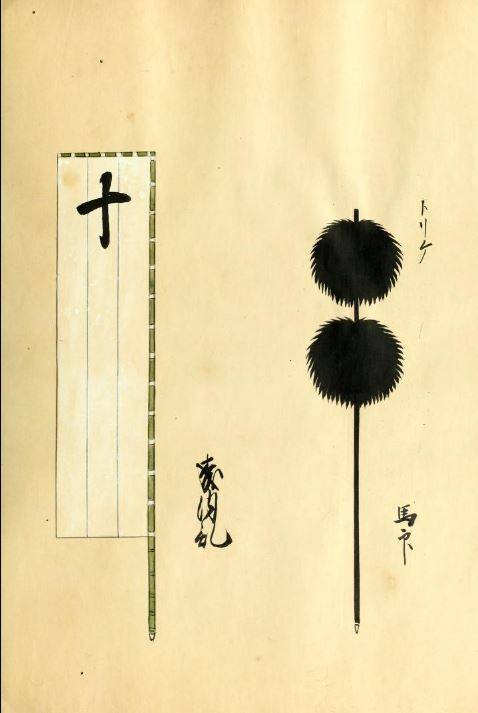 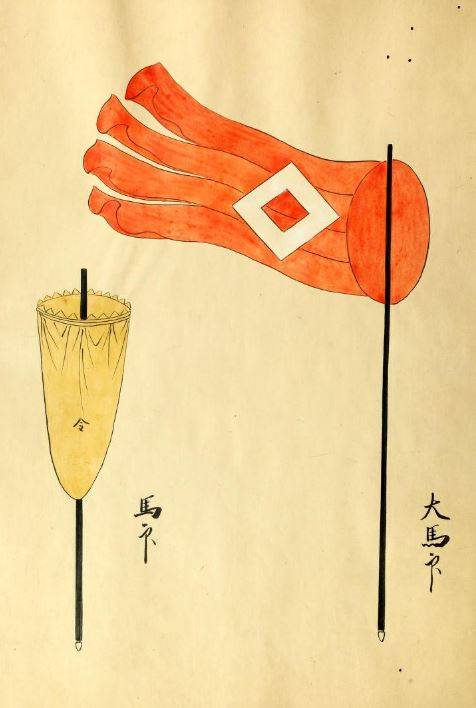 Daimyo, if they were to go into battle, often immediately removed Jinbaori and attached to the armor of Sashimono, since it was impossible to wear both at the same time. For example, daimyo Hirado had sasomono in the form of a golden disk on a black field.

But with the emergence of such a huge number of flags, the problem of identifying the daimyo himself, his staff and his entourage, has become acute again. And by the beginning of the 17th century, it was possible to solve it with the beginning of the use of the so-called “big standard” and “small standard” - respectively - o-mind-jirushi and ko-mind jirushi. Very often these were flags similar to nobori, but only with a square-shaped panel. But more often, they also took the form of various objects - Buddhist bells, umbrellas, fans, solar disks. 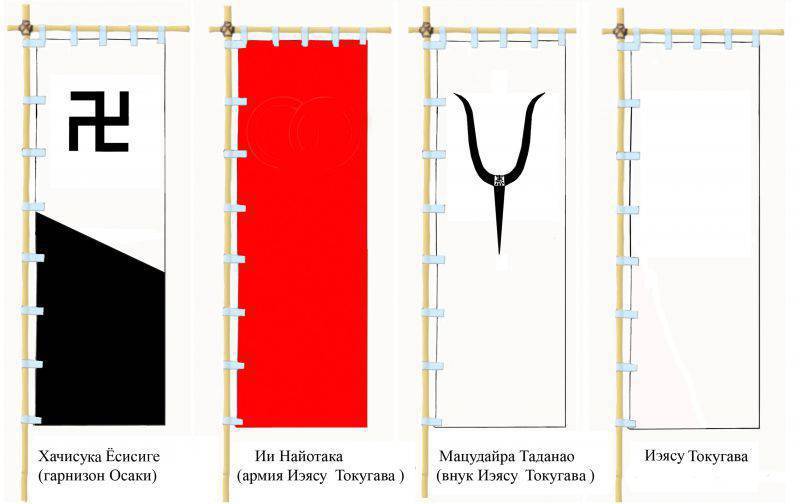 Nobori participants in the siege of Osaka Castle. Ieyasu Tokugawa had a simple white cloth.

Some standards were very large and heavy. Carrying such a standard was trusted to the strongest commoners, and it was a great honor for them. Sometimes they were strengthened behind their backs, like sashimono, but the standard-bearer himself supported the shaft for a couple of stretch marks, and two more people held him by the stretch marks from the sides. 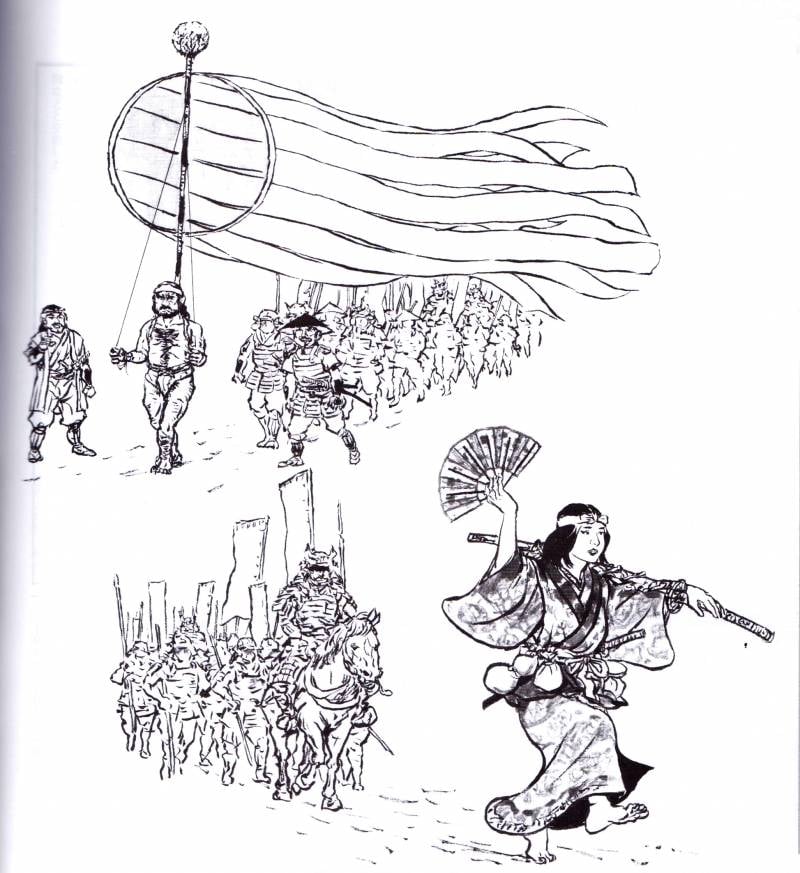 This is how fukinuks wore. Sometimes (an obvious relic of matriarchy) the banner of a samurai unit became ... a woman, usually a samurai mother, who took the vow of revenge. Picture from the magazine "Armor Modeling"

But the most difficult and difficult task was to wear a fukinuki - a long pennant, similar to the carp emblem at the Boys' Festival. The wind blew it like a huge stocking, and it was very beautiful, but it was really hard to keep it from falling.

The Japanese would not have been Japanese if they had not invented a lot of devices to wear sashimono and nobori and tried to give them a finished and elegant look. 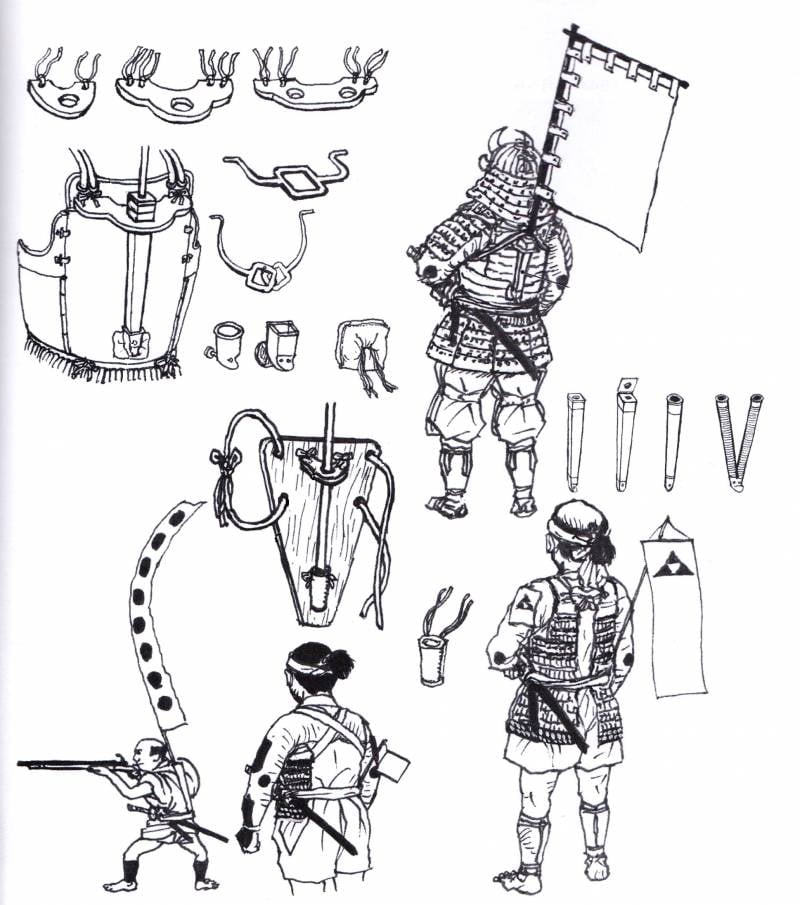 In this picture we see all the basic details with which the sashimono was attached to the samurai's armor on his back.

The sashimono shaft was inserted into a pencil case, which could be both square and round in cross section, and which was called uke-zutsu. It was decided to varnish it, so although this affiliation was purely utilitarian, it had the appearance of a genuine work of art. Since there could be two or three flags, and even five flags behind them, the number of cases corresponded to their number. 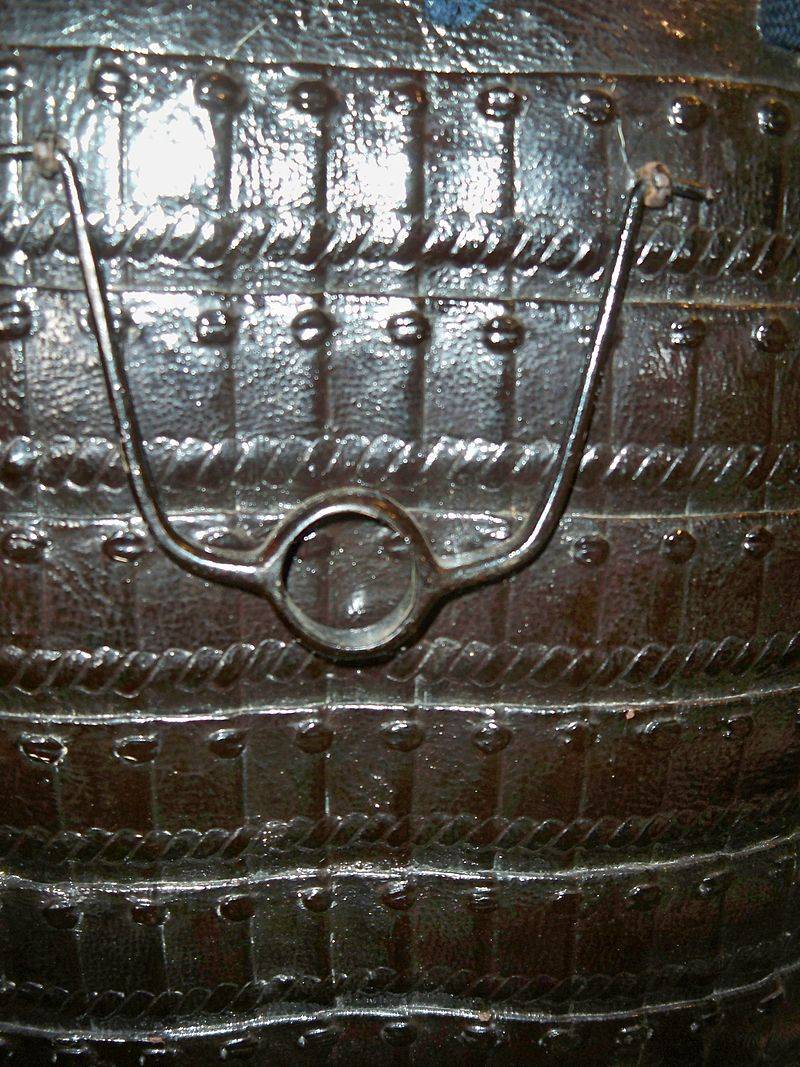 In the upper part of the shell, uke-zutsu was held with a gattari bracket. It could consist of one and two parts, and also the Gattars from a wooden plate are known, again with one or several openings according to the number of flags. This detail was attached to the back of the armor on the hinges. This made it easy to disassemble the dorsal design with the sashimono mount and remove the armor itself for storage in a box, and with it put all its accessories into it. 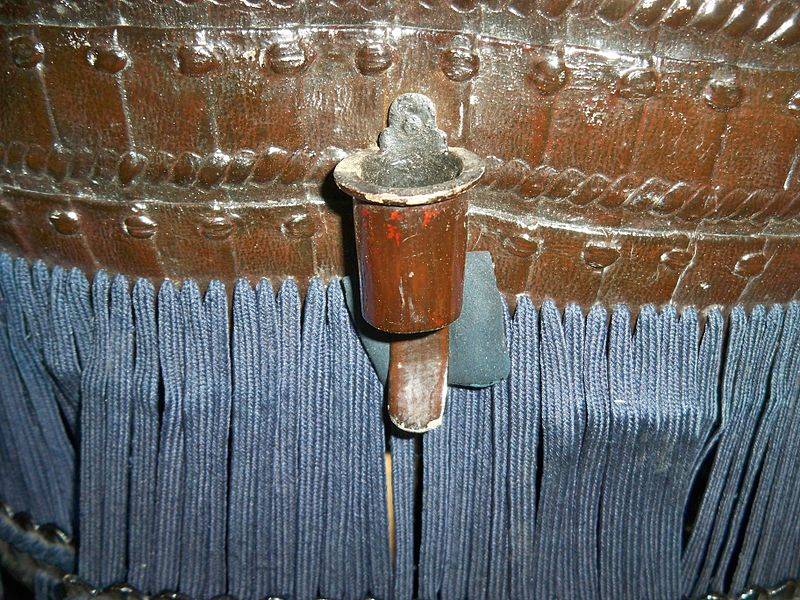 At the level of the belt was fixed "heel" of the canister - Mati-uke (uketsudo). Usually this item was metal and varnished in the color of the armor. 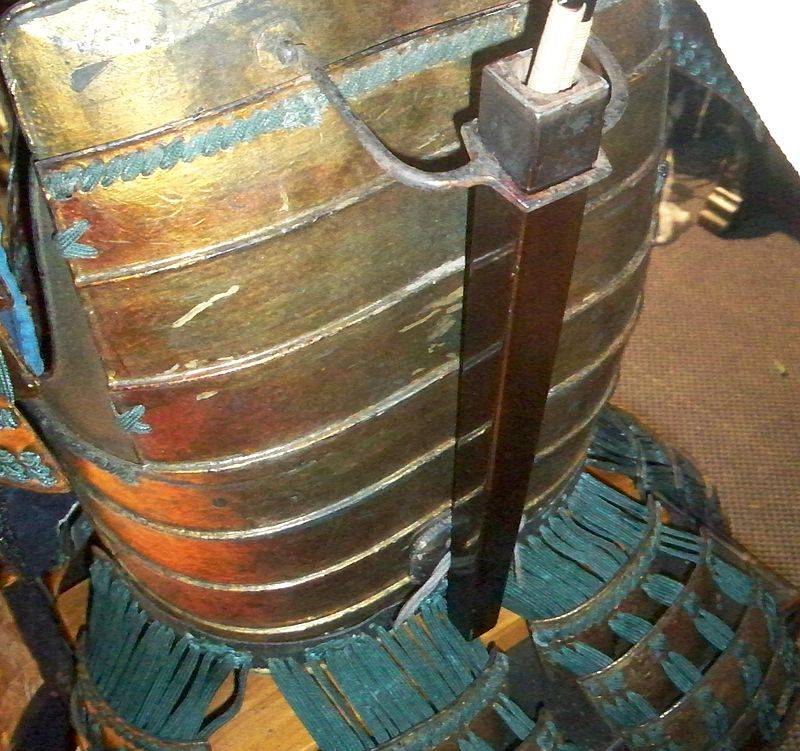 This photo shows a case for sashimono fully assembled. For ashigaru a standard fixture made of wood in the shape of a triangle with rounded corners was provided. Wore it on ties like a backpack. At the same time, it did not require armor, which made it possible to impress the enemy with the number of its troops even in the case when most of them did not have any armor at all. (Tokyo National Museum) 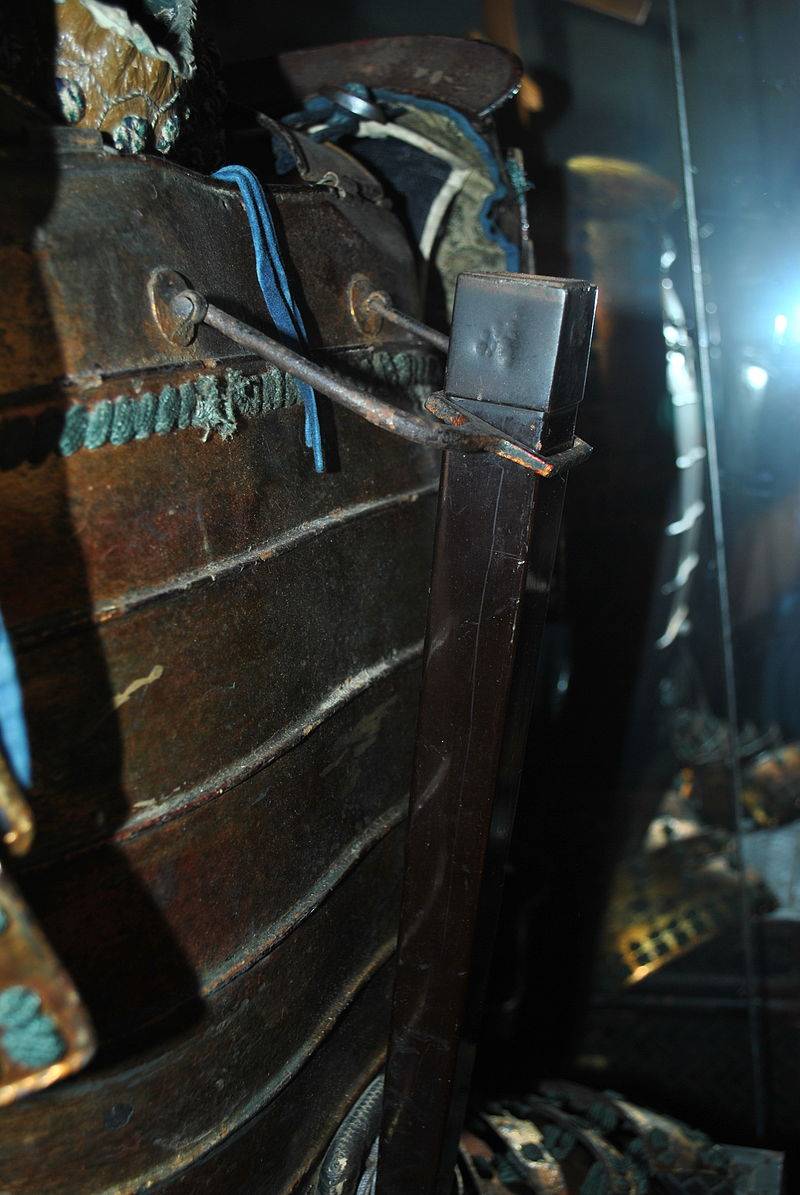 There were several identification marks used by the Japanese in a combat situation. These are the field screens of the Maca or Ibaku, with which the command post was fenced in from all sides. As a rule, they depicted a very large mon commander. Near the command post was located a detachment of messengers - tsukai-ban, with which the commander gave orders. And here was his most important standard, visible from afar. It seems strange, but as he commanded at all, sitting behind curtains, but in general, the review in the direction of the enemy was left to him. But the main thing was that all the Japanese commanders perfectly knew how to read the map, had shinobi in the army of scouts, and most importantly, they could count on the unquestioning obedience of their commanders. That is, where they were put, indicating the location on the map, there they had to stand, and move back and forth only to an order, transferred by the messengers. Within the framework of all this, one could show his personal courage as much as he wanted, chop off as many heads as he wanted and collect them around the battlefield. But the order was to be executed immediately. 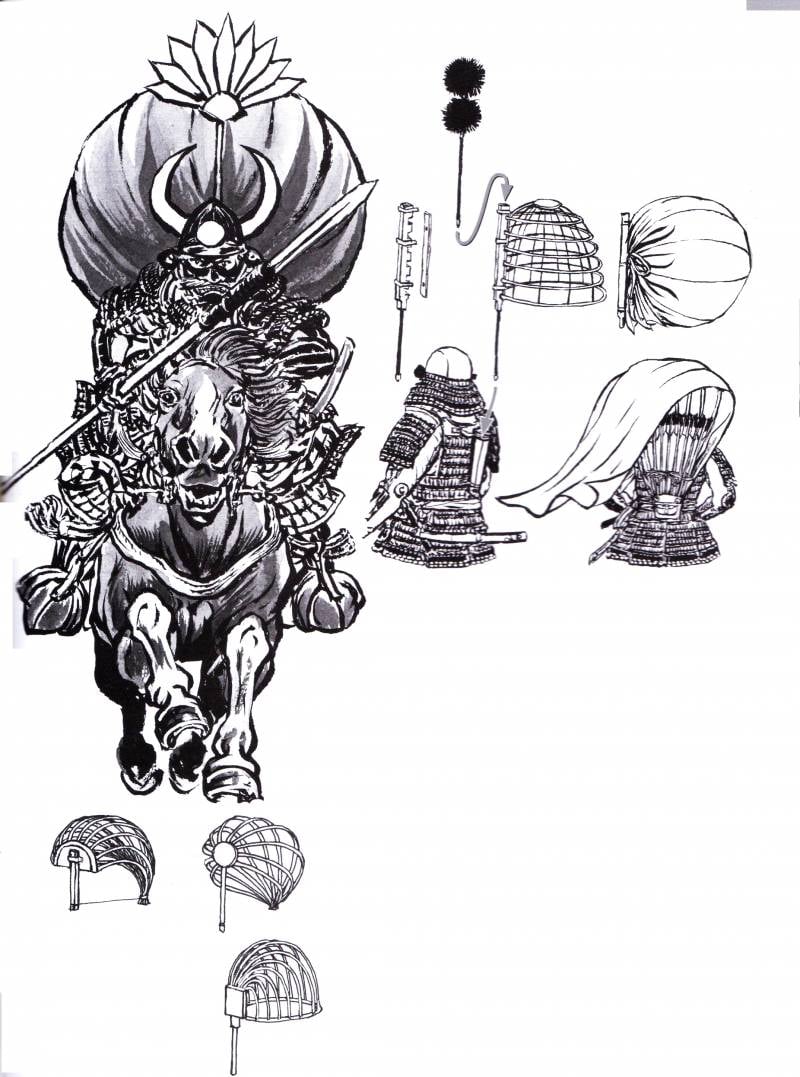 Good from Armor Modeling magazine. Sometimes it was well represented just amazing complexity of the design!

By the way, the messengers were identified by another very entertaining fixture - a good big bag of colored fabric, like a huge bubble. He had a base of flexible rods, so that with a jump even under the pressure of the wind, he did not lose his form. Horos wore not only the messengers, but also the soldiers of the bodyguard detachment. It was fastened in the same way as sashimono. For this, it had a pin inserted into uke-zutsu. But as always, there were originals, which alone was not very good. A sashimono tube or a Kosi-Sashi officers badge was attached to it. The form of "basket" could well be the most diverse. For example - to resemble a dome or ... European ladies' crinoline! Since the horror had a very large volume, which, by the way, is clearly seen in the figure from the Armor Modeling magazine shown here, the figure of the samurai with good on its shoulders acquired grotesque dimensions, which is considered to be a scarecrow of enemy horses!

Horizontally, they were usually sewn of bright-colored fabric, and besides, they also depicted mon daimyo, which allowed an instant identification of the messenger. But good could serve and for other purposes. So, in one of the Japanese manuscripts, it was stated that both horo and sashimono could serve to wrap the severed heads of their owners in them. "After removing the head from the warrior who wore horo, wrap her in a silk cape, and if it is the head of a simple warrior, wrap it in silk sashimono." These instructions tell us not only that silk was used as a fabric for sashimono and horosho, but also that the soldiers who wore nicely had a special status that was higher than that of others.

Interestingly, the Japanese rather rationally approached the manufacture of the same sashimono. And if for samurai they tried to do them, for simple asigaru they sometimes even felt an extra stick for a cross-piece, but simply bent a bamboo pole and put a narrow piece of cloth on it. The main role in this case was played ... its length!

Author:
V.Shpakovsky
Articles from this series:
How to fix on samurai sashimono? Part one

Ctrl Enter
Noticed oshЫbku Highlight text and press. Ctrl + Enter
We are
Hat, umbrella and horse tail are the banners of samurai!The last floor of the castle in Osaka ...
Military Reviewin Yandex News
Military Reviewin Google News
30 comments
Information
Dear reader, to leave comments on the publication, you must sign in.