March 29 2018
23
ORSIS rifles and carbines are known primarily for their accuracy and quality. Despite the relatively young age of the company, it managed to establish itself only on the good side, as in the global market. weapons, and on domestic. 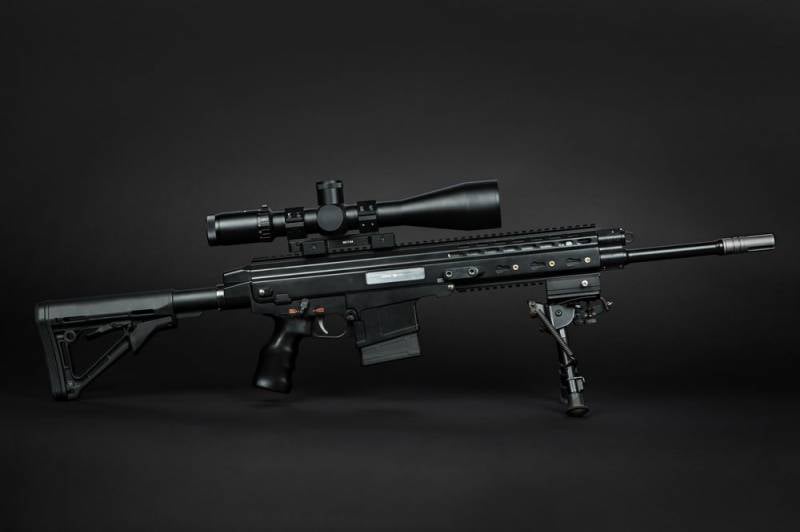 This year, the company introduced a new self-loading carbine called ORSIS K15 "Brother" under the patron of 7,62х51. Like any new weapon, especially from a company that boasts a very good reputation, this sample is of particular interest. The carbine is positioned as a weapon for hunting, as well as for shooting sports, let's try to examine it closer.

The appearance and ergonomics of the ORSIS K15 carbine "Brother" 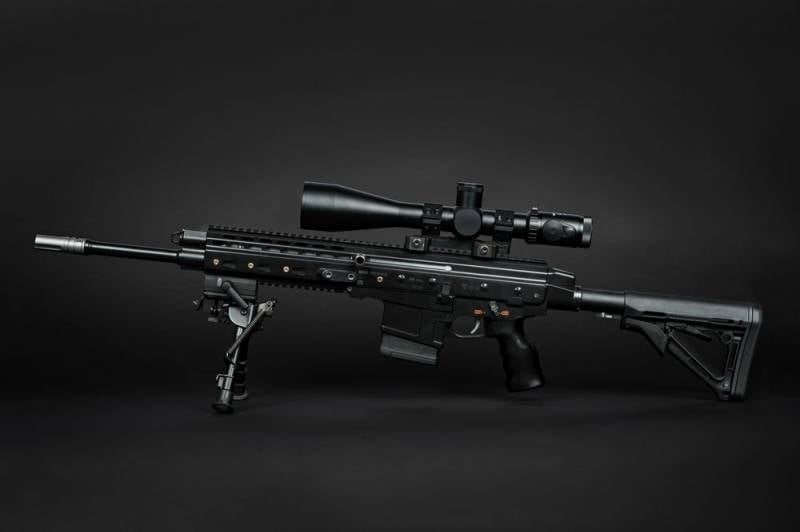 It is difficult not to notice that in the K15 “Brother” carbine there are a lot of details borrowed from an AR-like weapon. This was done not because of the great love for the development of Eugene Stoner, but because of the fact that the market is full of various additions for similar rifles and carbines. So, the butt can be replaced in the weapon, instead of the standard adjustable one, with a more convenient one for the shooter. Shops from different manufacturers can be used, even a muzzle brake-compensator of return can be installed not on a specific manufacturer, but on a variety of different ones. That is, the owner of the weapon gets the opportunity to make the carbine more convenient for himself, gets the opportunity to choose, and this can be met infrequently. Typically, manufacturers of various weapons add-ons choose the most popular model and produce a number of parts for it, different from the original ones, in this case for the new weapons on the market there are already many options for individual items. 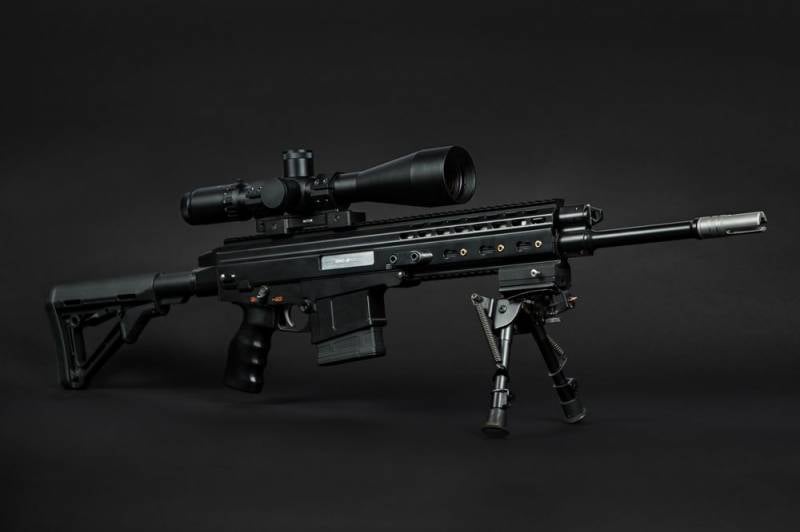 Not to mention that the weapon is completely "two-sided", although the release of a spent cartridge case is carried out only on the right side. The cocking handle can be swapped from left to right. The safety switch located above the pistol grip is duplicated on both sides. The store eject button can also be duplicated, but this is already available as an additional option. 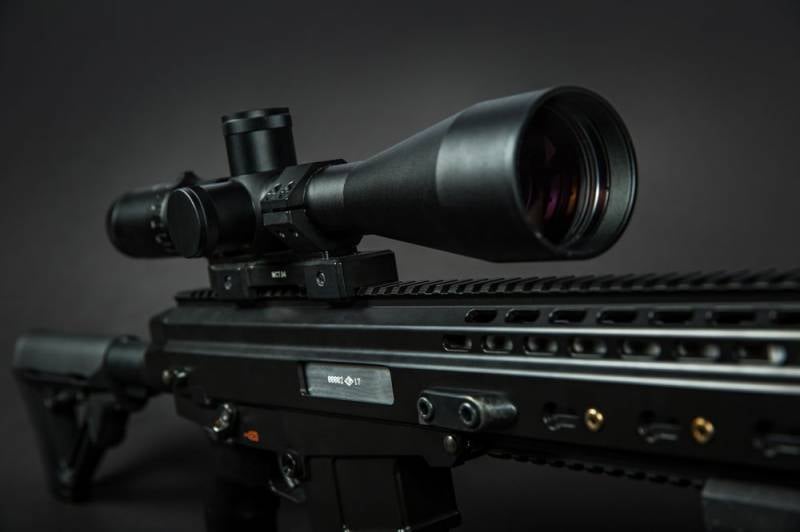 In addition to the two mounting plates at the top and bottom, on the forearm of the ORSIS K15 carbine “Brother” two more additional mounting strips on the sides can be installed. However, since the carbine is positioned as a hunting and sports weapon, the need for these additional attachment points is unlikely to arise. 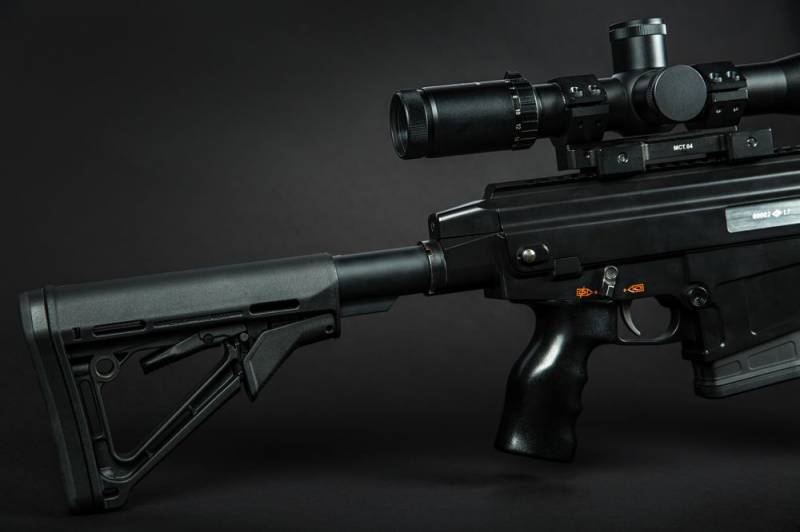 The karabiner’s open sights are absent, which would be a flaw in military weapons, but since the ORSIS K15 “Brother” is a purely civilian carbine, the case of failure of the telescopic sight is not so critical. In addition, no one bothers to install folding pillars and a fly on the long upper mounting bar, the benefit at the moment on the market there are a huge number of options for such aiming devices, in various versions. 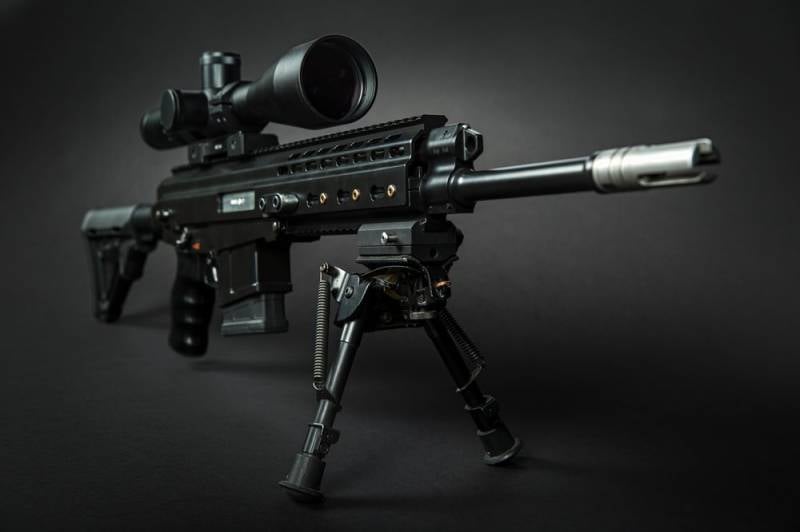 Weapons can be made in several colors: dark gray, "desert" and green, the standard color, obviously, black. 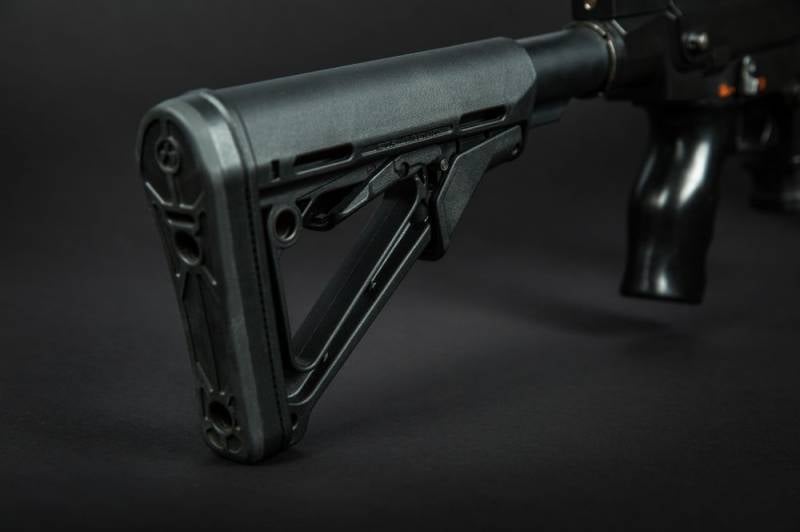 In general, the weapon apparently makes a positive impression, although the standard butt looks a little out of place.

The design of the carbine ORSIS K15 "Brother"

As with all ORSIS weapons, for the K15 “Brother” carbine, the designers selected the optimum materials for the individual assemblies. So, all the mechanisms subject to wear during operation, and structural elements that experience increased loads when firing, are made of high-strength steel. The elements with which the shooter constantly contacts are made of plastic. Those parts of the weapon that are subjected to minimum loads are made of aluminum alloys, which reduces the weight of the weapon. 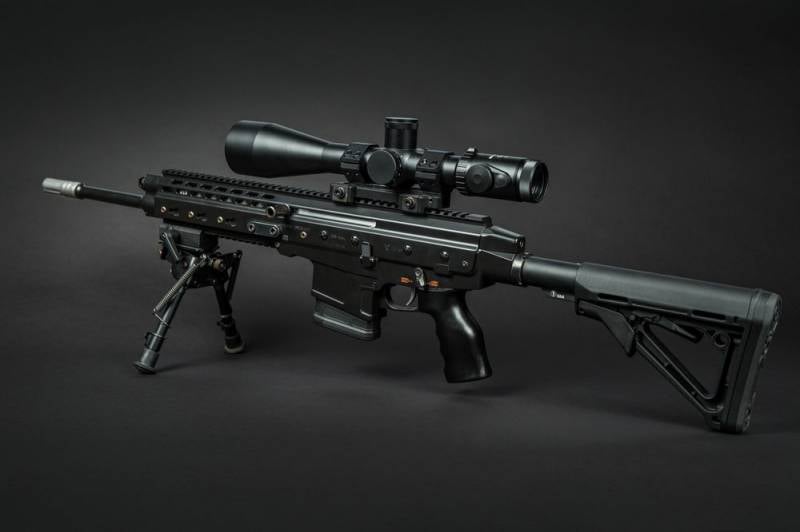 The basis for the new carbine was the automation system using the energy of a part of the powder gases discharged through the bore with a short piston stroke. The barrel is locked when the bolt is turned to two stops. Also in the design of weapons provided gas regulator. 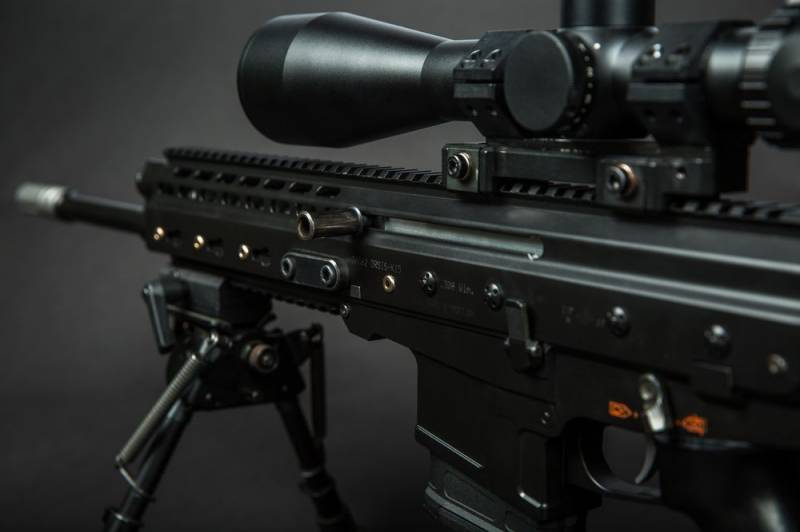 The manufacturer claims the operating temperature range for the ORSIS K15 carbine "Brother" from -50 to + 50 degrees Celsius. Of course, the performance will depend largely on the owner of the weapon, who will not only have to clean the carbine in a timely manner, but also apply the appropriate lubricant for a specific temperature range. Well, you should not, of course, wait for miracles, you can’t argue against physics, because the weapon will not be operational with an abrupt change in temperature. That is, when the carbine is cooled to -50 degrees Celsius and, for example, when a weapon gets into a room with a temperature of + 20 degrees Celsius, the carbine will be covered with a thick layer of hoarfrost and ice and will not itself be ready for firing. Oddly enough, but such obvious things need to be specified. 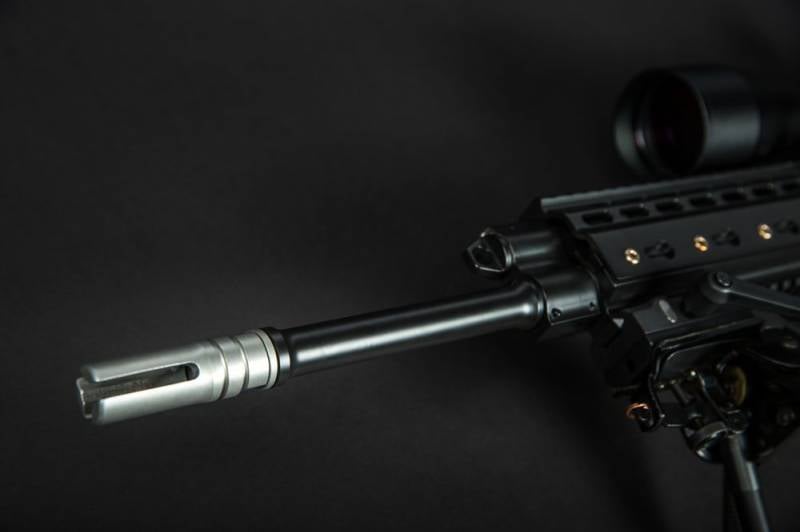 As mentioned above, the carbine can be completed with two different lengths of trunks - 406 or 508 millimeters. The manufacturer recommends the use of a short version of the barrel for sports shooting, apparently implying practical shooting that is gaining popularity, since in this case it is easier to maneuver with a weapon. The long version of the trunk is proposed to be used for hunting. The length of the rifle with a long barrel is 1208 millimeters, with a short - 1106 millimeters. The mass of weapons without cartridges, bipods and sighting devices is 4,6 kilogram. Height without sights - 182 millimeters, thickness - 76 millimeters. The carbine from detachable shops with 10 capacity of 7,62x51 cartridges is powered.

Pros and cons of the ORSIS K15 carbine "Brother"

The main advantage of the new weapon is its compatibility with the most various additions that are widely represented on the modern market. And it is not only about sights and bipods, but also the butt, which can be replaced by a more convenient without any problems related to compatibility. 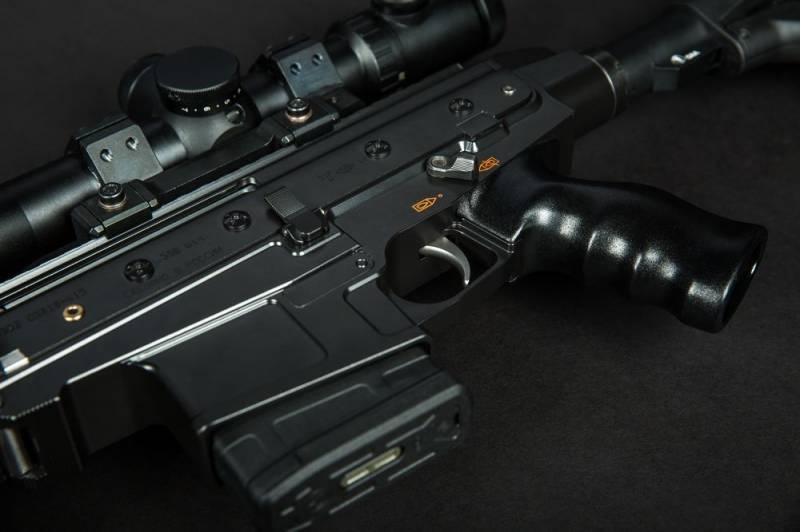 Disadvantages of weapons can also be found. First of all it should be noted that the carbine comes without sights and bipod. On the one hand, this is of course good, since the owner of the weapon is not imposed on what the manufacturer has chosen. On the other hand, even some open aiming devices would make the weapon more attractive, however, this is already on the conscience of the sellers, and not the manufacturer specifically. The selected 7,62x51 ammunition is certainly suitable for the ORSIS K15 “Brother” carbine and most of the tasks assigned to it, but it would not be superfluous to create several variants for different cartridges, which may be done later, the new carbine. So far, the most popular cartridge has been chosen, which allows you to sell weapons with equal success in the markets of different countries.

Summing up this brief acquaintance with weapons, one cannot but say that the attitude towards this carbine is biased. The ORSIS company has proven itself as a manufacturer of high-quality, accurate and reliable weapons, and therefore new models from this company, which, incidentally, does not appear as often as we would like, can be attributed in absentia to the highest category. 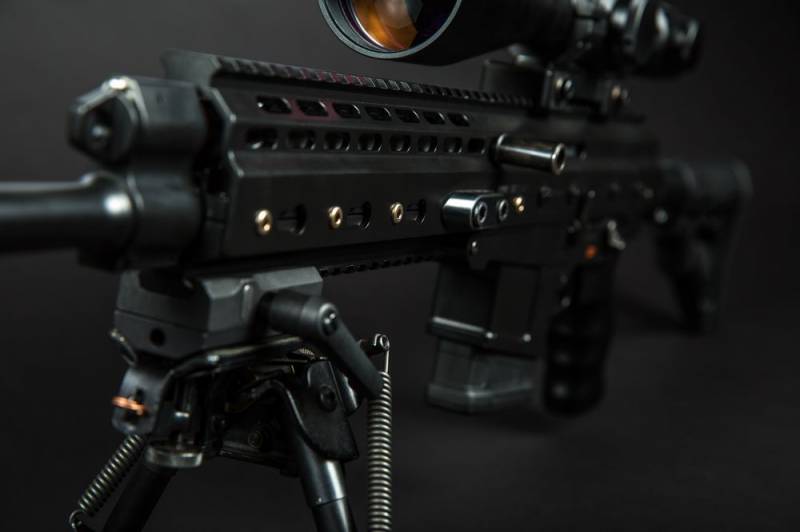 The truth is that you have to pay and pay a lot for quality, at the moment the price for this carbine on the manufacturer’s website is 200000 Russian rubles, while it is indicated that the number of weapons at this price is limited. At such a price, many will give preference to a cheaper weapon for a given ammunition, which is not a big surprise. It is quite logical to assume that the main part of the buyers of this carbine will be those who need to fit the weapon as much as possible for themselves, for example, the same athletes. Among hunters, weapons are unlikely to receive high popularity, primarily due to not at all “popular” value and the absence of at least a minimum set of weapons. 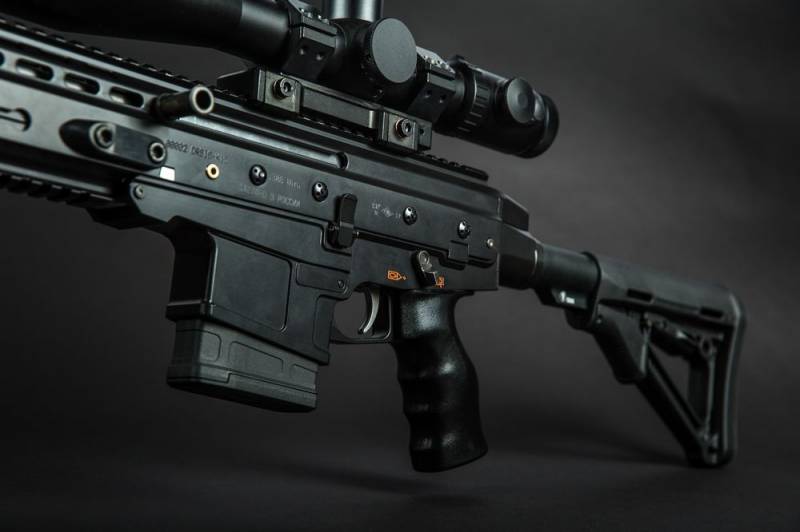 In any case, we look forward to the first reviews of the owners, among which information on the accuracy of weapons is particularly interesting. At the moment, in the company's catalog, this is the only self-loading carbine, and therefore a completely natural question arises: did the designers of ORSIS manage to “overcome” the automation system with maximum preservation of weapon accuracy and reliability? Let's hope that the designers, as before, have coped with the task and in the near future the company will be pleased with other variants of self-loading weapons.

Ctrl Enter
Noticed oshЫbku Highlight text and press. Ctrl + Enter
We are
Sniper fire in local warsWhat should be a modern sniper (part of 1)
Military Reviewin Yandex News
Military Reviewin Google News
23 comments
Information
Dear reader, to leave comments on the publication, you must sign in.