A Sindzhar trap is being prepared for the US Armed Forces. Will Turkey decide on a profitable share of the three parties? 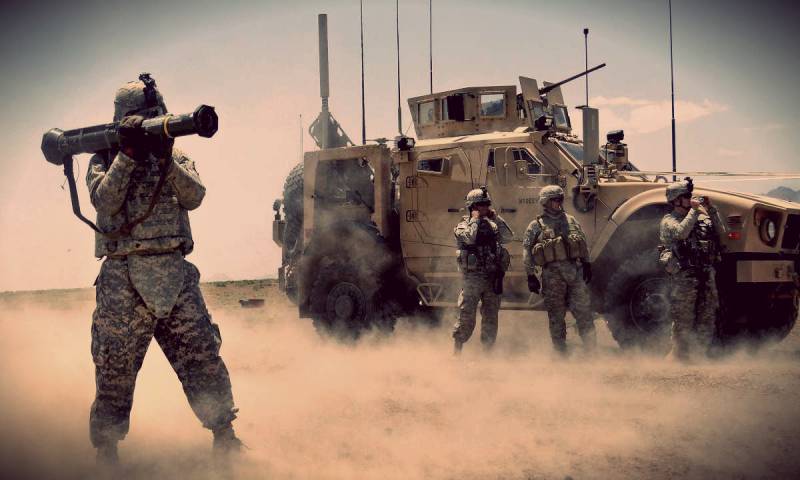 Having played on the traditional lack of negotiability for the YPG National Self-Defense Units, as well as the tacit consent of the command of the Syrian Arab Army, dependent on Russian-Turkish agreements, the units of the regular Turkish army with the opposition-terrorist groups "Free Syrian Army" and "Al-Nusra" (banned in Russia ) managed by cunning, as well as technological and numerical superiority to intervene in the Kurdish canton of Afrin. The successful military action allowed Ankara to join the forces of the “Idlyb Gadyushnik” with rebels in the Azaz region, thereby creating a powerful northern assault backbone, capable of launching an operation to block and continue the occupation of Aleppo today. It is for this reason that the Turkish armed forces near the town of Anadan (in 10 km northwest of Aleppo) were sent in advance to a front-line observation post, a military convoy, which included bridge layers (assault bridges); obviously, to force the small river Quake.

Fortification work carried out by the engineering units of the Turkish Land Forces in the Aleppo sector of the front, as well as increasing the capabilities of the offensive armored "kulak" near Anadan and Hadera, did not go unnoticed by the defense structures of the Syrian Arab Army. As a warning about the inadmissibility of further advancing NE of Turkey in the direction of Aleppo, 19 in March 2018, the site of the observation / stronghold in the Anadan region was hit from the 122-mm rocket system 9K51 “Grad”, deployed in the vicinity of the city of Khandarat. This countermeasure led to a tangible result: the regular operation of the Turkish 155-mm Firtina self-propelled self-propelled artillery systems in the cities of Nubl and Zahra ceased, which ensured the free transfer of the remaining units of the pro-government Syrian National Defense Forces to the southern part of the Afrin canton. ), the Kurdish YPG units, as well as units of the regular Syrian army, which were in possession of heavy armored vehicles.

Danae mixed grouping was established in the city of Tell-Rifat, as well as in small towns of Shatal al-Ziyar and Deir al-Jamal to push the pro-Turkish SSA and Turkish army units into the 4 - 7 km distance from the government-controlled territory of Aleppo province. A very important point in the formation of this defensive "barrier" of the city of Aleppo is that its main purpose remains even in the case of the occupation of the city of Tell-Rifat by pro-Turkish rebels and the NE of Turkey. Thanks to tough measures from Damascus, further attempts by Ankara to knock out a foothold from under the feet of the Syrian army near the city of Aleppo in the foreseeable future (about six months) are not expected.

PROMISING FOR MOSCOW AND DAMASK THINKING WITH THE ATTACKMENT OF THE TURKISH ARMY IN IRAQI SINDJAR. DO YOU NEED TO TALK ABOUT BONUSES FROM ERDOGAN'S ACTIONS?

Today we will try to consider in more detail the scenario of the offensive operation announced by Erdogan on the Iraqi city of Sinjar, located in the province of Ninawa, most of which is actually under the control of the Iraqi Armed Forces. Interest in the occupation of the city of Sinjar by the Ground Forces of Turkey began to slip more and more frequently in the statements of the Turkish President is not at all accidental. Indeed, according to the chronology of events, this interest clearly coincides with the loss of the possibility of occupying the Kurdish region of Manbij, which was one of the main points in the military operation “Euphrates Shield”. Back in late February - early March 2018 of the year (a month after the start of the “Olive Branch”), it was known that the Turkish Armed Forces, as well as the “green militants” supervised by them, would not dare to attack an offensive against Manbij, since the headquarters of the Western coalition a worthy response was prepared - the transfer of the central city of mixed paramilitary patrols, consisting of American military personnel and trained in the Hasek detachments of the Syrian Democratic Forces.

The point in this matter was put by units of the US Special Operations Forces (“green berets”), who unexpectedly arrived in the Kurdish village of Kurt Viran to reconnoiter transport interchanges and strongholds of pro-Turkish rebels-militants in the area of ​​the “El Babskii bridgehead”. This is not for you Syrian NDF militia armed with RPGs and 12,7-mm machine guns, which, without air support and network-centric linkage, should have been compelled shoulder-to-shoulder with Afrin YPG / YPJ troops to resist the Turkish invaders. Behind these guys is a link of air artillery batteries of direct support for the troops of the AC-130 "Specter" and the squadron "Strike Needles", the pilots of which are ready to tear the pro-Turkish forces at the most critical moment to shreds. It was here that Erdogan backed off, quickly finding an excellent alternative in the form of Iraqi Sinjar.

As you already understood, the main argument in favor of preparing the ground operation of the Turkish army in northwestern Iraq was the presence in Kurdistan of the Kurdistan Workers Party (PKK) in Sinjar and its environs, as well as in most of the province of Ninewa, as the most terrible terrorist threat to the Republic of Turkey. Recep Erdogan’s fears about the formation of Iraqi Kurdistan and the buildup of military power by the units of the “Kurdistan Workers Party” are quite justified historical the background. The fact is that as far back as the mid-80s. XX century, the PKK in Turkey was banned at the legislative level in connection with the participation in the military coup of the 80th year. Further repressions by the Turkish security forces against the entire Kurdish population, as well as the involvement of the Gray Wolves (their modern “wing” was seen as part of the Ukrainian military forces in the Kherson region, on the border with the Republic of Crimea) awakened the southeastern The Kurds of Turkey have a real postulate of hatred towards the Turkish leadership, which, for obvious reasons, became the foundation for the formation of the Kurdistan People’s Liberation Army, which by the year 2000 was reformatted into the People’s Self-Defense Forces, for which Ankara turned into the main enemy in the Near Asian region.

One of the most controversial issues successfully used by Erdogan and his entourage in arguing for military actions against any Kurdish currents (without clarifying their affiliation) is quite aggressive militaristic ideology of the PKK, according to which terror (in some cases) is classified as “active self-defense”, in Therefore, by the second decade of the 21st century, the main Kurdish political stronghold was almost completely isolated, legally ratified by the European Parliament, governments nyh European countries and the United States. Nevertheless, both the USA and the EU countries, “bypassing” their own bills with all kinds of methods and tricks, continue to support both the PKK and the “Syrian Democratic Forces” in Syria (on the east bank of the Euphrates), fully welcoming the replenishment of the SDF’s ranks. ISIL jihadists, of whom a very capable “wing” of the “Army of the North of Syria” is being formed today in the province of Haseke for the upcoming confrontation with the Syrian Arab Army on the west coast of the Euphrates.

Based on the above, as well as information about the preparation of the coalition forces and the SDF for the storming of the “Husham pocket” with the further entry into the “game” of the US and British army units in At-Tanf, we can draw a serious conclusion. The 26 of March, announced by Erdogan, and the military operation that has already entered the first phase of the attack on the Iraqi city of Sinjar for the first time in all time will bring a lot of operational and strategic bonuses not so much to Ankara itself as to Moscow and Damascus. If the Turkish army finally decides to conduct the ground phase of the operation in the province of Ninawa, then to occupy Sinjar with mechanized units of the Turkish army it will be necessary to overcome 160 km along the Ibrahim Khalil-Sinjar highway. In the absence of resistance from the militias of the Kurdistan Workers' Party, as well as Iraqi ground forces, such a march may take about 3,5 — 4 hours. The capture of Sinjar will solve the most important strategic problem of Russia, Syria and Turkey - will stop the transfer to the eastern bank of the Euphrates (to the cities of Essaouvar, Hasek and Kamyshly) a large number of light and heavy armored vehicles of the US armed forces, and will not allow to deliver to Syrian Democratic Forces (SDF) multi-kilometer convoys with military cargo in the form of anti-tank and small weapons

In essence, the buildup of the offensive potential of the “New Syrian Army” formed by American instructors will be reduced to a minimum, which will allow the Syrian army and the Russian military contingent on the west bank of the Euphrates to ensure relative parity with the forces of the Western coalition and the SDF under their auspices. A question may arise: how will the traffic of large military cargoes and armored vehicles of the US Armed Forces to Rozhava with the occupation of Sinjar be suspended? We are looking for the answer on the map. The lower branch of the highway from the Persian Gulf coast to the Syrian city of Al-Shaddad passes through this city. The upper branch of Mosul-Kamishli passes through a section of the province of Nineveh, which should also be under the control of Ankara. The occupation of Sinjar by the forces of the regular Turkish army will block this important “artery” for the Pentagon, which Baghdad once gave to the exploitation.

But the question remains far from being resolved in our favor, for the Prime Minister and Commander-in-Chief of the Iraqi Armed Forces, Haider al-Abadi, was not a timid and just yesterday ordered the transfer of a powerful backbone of the Iraqi army to the Iraqi-Turkish border against the backdrop of the threat of an offensive NE of Turkey. There is plenty of technological and numerical potential for pushing the Turkish army out of the border near Baghdad (from Panzeri-S1 to intercept high-precision rocket weapons of the Turkish air force to the Abrams’s M1A1, which can easily withstand the slow and poorly protected Turkish Subram and Leopar-i-2014 -e-an-i-ray Amet-2017 Turkish Institute of Abrams. ). Whether Turkey will decide on such an attractive military action, will show the next few days.

Ctrl Enter
Noticed oshЫbku Highlight text and press. Ctrl + Enter
We are
Ankara warned in the language of "Point" and "Gradov"Prospects for intervention in Syria. Turks and Saudis are preparing for war or bluffing?
Military Reviewin Yandex News
Military Reviewin Google News
49 comments
Information
Dear reader, to leave comments on the publication, you must sign in.