March 29 2018
146
On "IN" published an article by Alexander Samsonov "Scenarios for the destruction of Russia". Without going into criticism of some of the confusion of its content, I would note that the list of virtually all types of collective West's impact on Russia coincides with reality. Who does not see this, and such, judging by the comments on the article, is either blind, deaf, or stupid, or on the “other side”, or all of this together. 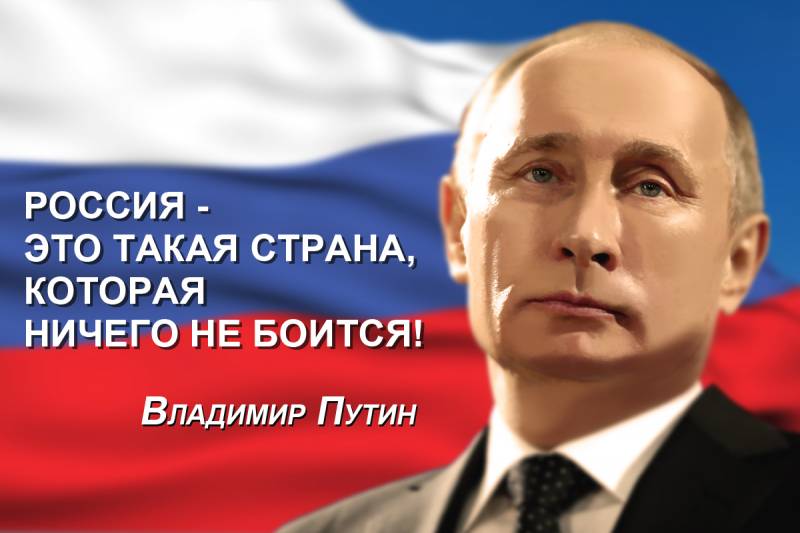 Nevertheless, let me state my opinion. It will not contradict the mentioned article as a whole. I think that the view on the current situation will be from a different angle.

Start with stories a question. 1812 year - campaign of Napoleon Bonaparte on the Russian empire, gathered the forces of almost all of Europe. Victories at the beginning of the campaign gradually faded away, in the end - the enemies of Russia suffered a crushing defeat. Russian troops - in Paris! We put up and fraternize with the local population, instill a bistro culture, update the genetic code there and go home.

1914 year - the beginning of the First World War. Many historians claim that Russia could win and purchase, in particular, the straits from the Black Sea to the Mediterranean. However, "some forces" from the outside organized the October Revolution, put their henchmen at the head of the country, who signed shameful agreements. The Russian Empire fell, falling apart.

But the success of the enemies was temporary, the new state, the USSR, after Lenin's death "got out of control", quickly eliminated illiteracy, bought industrial technologies, implemented a program of electrification of the country, industrializing the national economy, first in the history of mankind sent man into space and caught up with the USA in the field of curbing nuclear energy. And all this against the background of the creation of the world socialist system, which covered almost half the world.

At the same time, the party leadership ruined agriculture, destroyed a significant part of the carriers of cultural and intellectual potential, reduced the spiritual potential of the Orthodox faith to almost zero, replacing it with the moral code of the builder of communism, and created the preconditions for growing dissatisfaction with the system among the highest party-economic and power elite.

Skillfully playing instruments of combined pressure: from the outside — economic conjuncture, political pressure on the leadership of the members of the world socialist system; from the inside - by creating an opposition among opinion leaders and absolute authorities, direct bribing decision-makers and surrounding technical personnel, as well as propaganda of Western values ​​among the masses, the USSR was skillfully and instantly wrecked during the “greatest geopolitical catastrophe of the twentieth century”.

Supporters of conspiracy theories argue that certain “powerful forces” that mentions slipped through even at the level of state leaders exert unprecedented informational, political and economic pressure on governments and peoples of different countries, demonizing Russia in the eyes of world public opinion.

But it’s not so easy to dump the Russian colossus: combat-ready and well-equipped armed forces, vast territory and, most importantly, unexpectedly powerful consolidation of the most capable part of the population, 56 million people for the national Leader, make direct armed aggression against Russia unpromising and fraught with unacceptable losses. if not complete ruin.

Therefore, a Strategy for Thousands of Cuts was developed. It is not necessary to explain, everything is already visible to the naked eye. The ultimate goal of this strategy is not “scenarios,” as the author of the article writes about them, which gave rise to discussion. The main thing is the complete and final destruction of Russia at the level of not only the state, but also the Russian ethnos, the Russian civilization through the dismemberment of the territory, the moral and physical destruction of the nations united within the framework of the Russian state and the removal of references to it from the annals of human history.

Therefore, I am sure, there will be no reconciliation with the West as long as these “powerful forces” dominate. Obviously, they are the authors of the concept of the “golden billion”, and Russia has become him across the throat in the implementation of this concept. It must be said that the aggravating relations between Russia and the West that occur are occurring regularly. Some even write that their “powerful forces” are developing plans for 104. Maybe this is a coincidence, but something like this turns out if the plans allow for some kind of “standard deviation” depending on the realization of the plans: 1812 - 1914 / 1917 - 1991 / 2018. True, “1941” falls out of the series. Apparently, the exit of the USSR out of control served as a reason for an additional attempt to destroy the Russians during the new world war.

But this time, the enemies suffered a fiasco, and the Soviet troops settled in the center of Europe and at first, even through the checkpoint, they went to West Berlin for a beer. By the way, my father told me that simple American and French soldiers and officers looked at these tricks through their fingers and only whistled after those whore. But the British - they were shooting in the back ...

The Russian colossus is strong, but Achilles was invulnerable in battle. Except your heel. And Goliath was invincible, but got a sling in the eye from David. Therefore, Russia has its weak points. It seems that all these weak points of our Leader of the nation are well known, and he knows how to act. And do not teach him what and how to do. Our task is to help him in this. With such a call, the President addressed the nation.

What we can do? First of all, take up the mind: stop quarrels about who is cooler and smarter than his brother, leave fraud and corruption and live honestly. Do not set a life goal on getting money at any price, but work for yourself, your family and the common good. Then the money will come. Exactly as much as needed for wealth. And justice is when you get as much as you earned and not stole from people.

This applies to any person, whether he is the head of government, his member, a deputy at any level, a judge, a police officer, an investigator, a security officer, a supermarket security guard, and even a courier. It seems that here it is not necessary to tell a banal parable about how a father showed his sons the power of unity using the example of a broom. The strength of a nation is really in its unity.

And then the internal enemy will not pass, the businessman will not offer a bribe or a rollback to a local official and a fireman for signing on papers, creating conditions for a “HYIP”; deputies will not pass laws to please large corporations and harm ordinary people; The Central Bank will not give money to outsiders, from whom you can only expect major trouble, and will infuse them into our near-death economy; a policeman, on his way to work, will think about maintaining order, and not about who to “grab” today; the judge will not stamp the verdict or decision based on the proposals of the preliminary investigation, but will ponder the essence of the matter, guided by reasonable arguments along with the law.

And even the “top managers” of our state corporations, who are smartly shifting papers from place to place for multimillion-dollar salaries, will not strongly object because of reducing their remuneration to reasonable sufficiency. So that we don’t collect money for saving the sick children by the whole world via SMS, let the fans of our fattened football players collect money for them in this way.

And the FSB will never allow either a palace coup, an attempt, or a big buzy, following the example of our Ukrainian counterparts in mind.

By the way, now some of our Ukrainian "brothers" sneer at social networks over the tragedy of Kemerovo. In the same way, they mocked the An-148 catastrophe. And then I remembered the statement that the Russians and Ukrainians are one people. One thing and values ​​are often different. If for a significant part, which refers to the descendants of the ancient ukrov, who dug up the Black Sea, the greatest happiness is when “Susida svina died” (“the neighbor has a pig died”), then for very many Russians, the greatest happiness is to bite, humiliate fellow , being absolutely sure that only he is the "navel of the universe" and the carrier of the true mind. From this, by the way, sometimes big troubles occur.

Summarizing all the above, it should be noted that we are in a position where external armed aggression by itself, without the support of it from within by an internal enemy, is unlikely. On the other hand, there is an obvious danger from internal evil, which includes our disunity at all levels of social life: social inequality in income and consumption, separation and cronyism (I almost did not say “party-economic”) elites, their creation of budget feeders at all levels , quarrels between opponents in theoretical and practical ways of choosing the path of development of the country and the organization of a fair dormitory. To this should be added the presence of direct opponents of sovereign and independent Russia, who live among us, pour information dung on us, fool us and pluck us and live at our expense.

It must be mercilessly pulled out into the light of God, cut short, eliminate the conditions that create the ground for such evil, but the main thing is to change ourselves. "The kingdom of God is within you." This means that no matter what laws the legislator may adopt, no matter how much the confessors read sermons, the person will do what he wants according to his inner conviction. And if he does not follow the conscience and is not very afraid of the law, then he is taken for fraud. And this is often pushed by the existing system of relations between economic actors and authorities.

Therefore, it is advisable to start building the state’s internal security from above. At the same time, it is unlikely that all existing departments under the leadership of the current leaders are capable of practical changes. Including innovations and digitalization, which for some reason do not like the author of the article “Scenarios for the destruction of Russia”. Quite the contrary, if we fail to introduce these categories, we will be thrown back into the “Stone Age” by the developed states. And then they will surely eat us. Look at least at China, which understood this and was transformed by historical standards instantly, when it began to master modern world technologies.

Good luck, Russia! Good luck, Vladimir Vladimirovich, in the most difficult area of ​​activity - the internal transformation and revival of Russia! 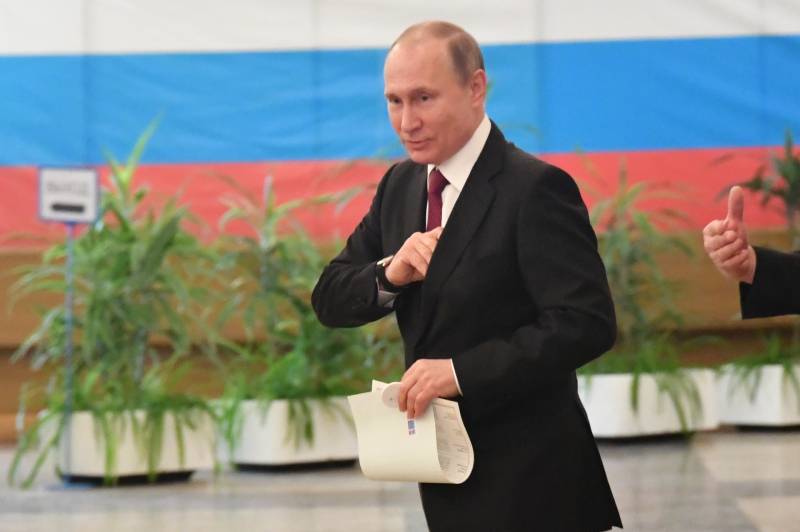 Ctrl Enter
Noticed oshЫbku Highlight text and press. Ctrl + Enter
We are
Interview of V. Putin to Channel One and the Associated Press AgencyWhat you didn't want to know about England
Military Reviewin Yandex News
Military Reviewin Google News
146 comments
Information
Dear reader, to leave comments on the publication, you must sign in.