March 27 2018
3
In the two regions of the Far East raised by training anxiety in the framework of the tactical exercises of the motorized infantry units, reports press office Eastern District. 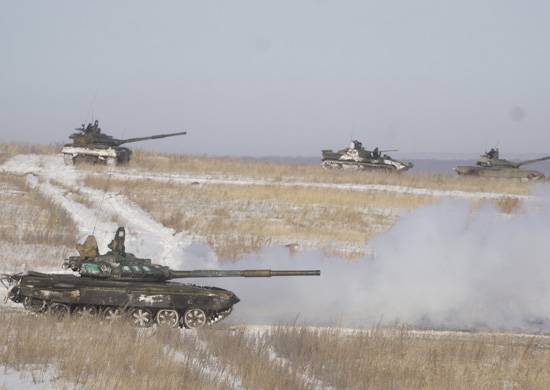 As part of the launched tactical exercises in the Khabarovsk Territory and the Jewish Autonomous Region, units of motorized rifle formations were simultaneously raised by training alarm. Over 2 thousand military personnel take part in the events and about 400 units of military equipment are involved, among which Tanks T-72B3, BMP-2, artillery self-propelled guns 2S19 Msta-S, BM-21 Grad reactive systems, Shilka anti-aircraft systems and Igla MANPADS,
says release.

Units will march on standard equipment to the landfills of the regions of their deployment.

It is reported that “during the extension elements of the reflection of air strikes will be worked out aviation a conditional adversary, sabotage of reconnaissance groups and command and control of units in conditions of active radio suppression of communications by "enemy" electronic warfare equipment. "

According to the command, “within a week, tactical groups will have to repel the offensive of large enemy forces, using the experience of modern military conflicts,” the press service noted.

At the last stage of the exercise, live firing of all types of weapons involved will be conducted.