Fiends on the Black Sea: the little-known crimes of the Nazis in the area of ​​Novorossiysk. Part of 8. Final

March 28 2018
7
On the morning of September 16, 1943, Novorossiysk was completely liberated from the invaders. Only by 26 of September about a thousand people returned to the city, most of whom were either evacuated in Gelendzhik, Tuapse and Sochi, or fought in partisan detachments. Naturally, the first townspeople could not restore all the details of the crimes of the Nazis - the witnesses were either killed or expelled from the city. For example, the author’s grandfather returned to his native Novorossiysk only at the beginning of 1944, when his Red Army convoy beat off the Nazis. Without these direct witnesses, it was extremely difficult to carry out an investigation, it was necessary to move by “touch”. 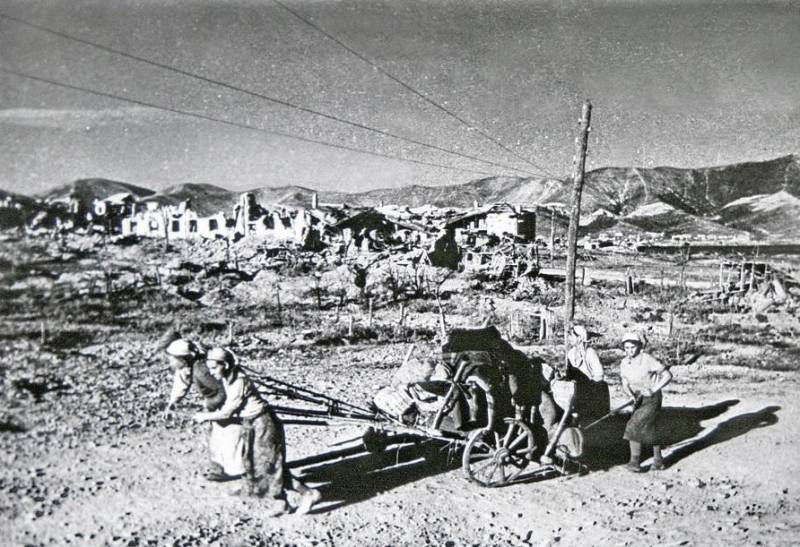 Despite the desperate efforts of local authorities and state security agencies, a lot of information obtained by them in harsh conditions became the foundation for a significant underestimation of both civilian losses and property losses. Although these numbers are terrifying. No matter how cynically it seemed, the authorities conducted a kind of audit of the urban infrastructure - roads, factories, port facilities, railway junctions, etc. The amount of damage amounted to about 2 billion rubles in pre-war prices! And this is not counting not only the personal property of citizens, but also parts of exported metal and machine tools, automobile and horse-drawn transport, livestock of cattle and poultry, etc. Of about 500 thousand square meters of pre-war housing 490 thousand were destroyed.

The situation with the population was much worse, if only because the dead could not be raised from the grave. In 1939, in Novorossiysk, thousands of people lived according to various data from 96 to 111. By the beginning of October, the local authorities could hardly have 43 citizens mobilized for reconstruction work, given the women and minors. 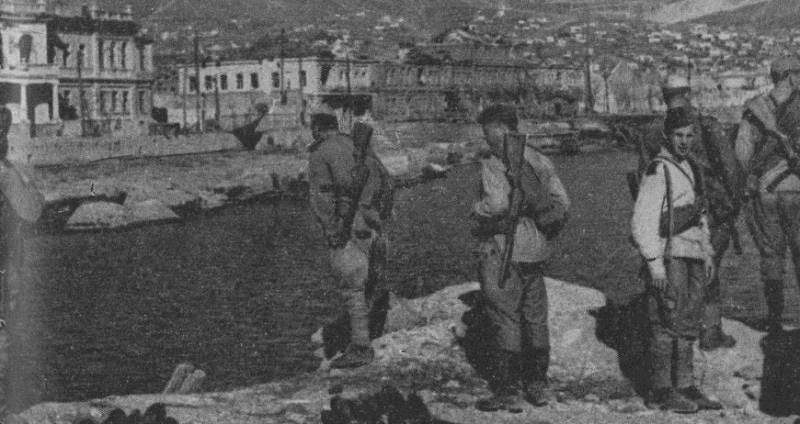 The first works on clearing the debris and demining the territory required not only hard work, but also strong nerves, so terrible were the finds. It was then that in reports and reports the data on stolen and dead people flashed. So, thanks to German documents, reports of own intelligence and the testimony of a few local residents, the first figures of the number of hijacked Novorossiysk - 26 thousand (the actual number of hijacked - over 32 thousand) began to appear in the acts. Sometimes these substantially underestimated data lead so far. At the same time take into account the unfortunate who died on the road, it was not possible. The Germans didn’t count, and those who died on the way (people were mostly driven on foot) were simply dumped into roadside holes far from their home, where no one could identify them. So hundreds, if not thousands of nameless victims perished.

The excavated burial pits forced us to form new commissions over and over again, since it was impossible to act constantly and purposefully within the framework of one commission with a wild lack of resources. Already on September 16, the 43rd officer and sergeant staff (senior lieutenant Babyr Stepan Vasilievich, senior lieutenant Shustov Evgraf Poluektovich and others) made a number of acts of detection of bodies of civilians, as well as Red Navy and Red Army soldiers. In the cellars were found the bodies of men, women and children - all with signs of torture. For example, the corpse of a girl of about 15 years old, according to the satanic habit of the Nazis to treat the female sex, was mutilated - the nose, ears and chest were cut out. Over the soldiers of the Red Army and fleet Germans and Romanians showed more Jesuit imagination. During the torture, one of the red-navy sailors found by the tortured was first torn off a bloodied bandage from his head, covering the wound. And later, judging by the burns, they shot at point blank range in a torn wound. 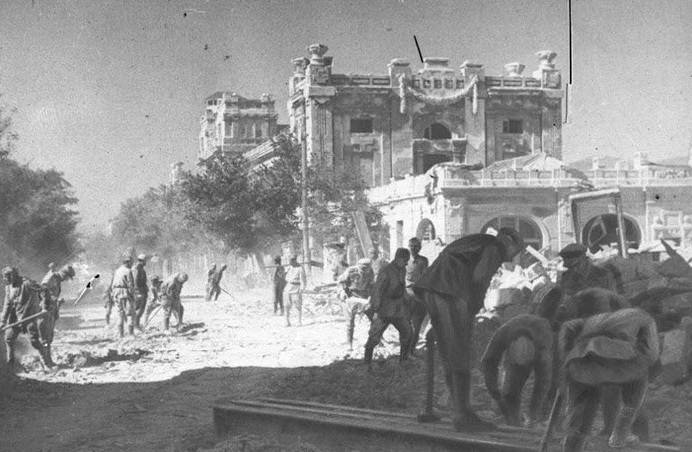 But this, alas, was only the beginning. Later, acts poured from the devil's cornucopia. The bodies were found with no less frightening periodicity of the discovery of mines, which laid the entire city and its environs, including vineyards. October 11 On the 43, the medical expert committee, chaired by PF Grishay, began its work. as part of the captain of the medical service Prutyak GK, medical examiner NA Dukhovny, medical inspector of the city Matkul A.M. and other individuals. It was this commission that examined the basement of the building where the local Gestapo office was located. Under the rubble, the commission found seven burnt bodies - these people were locked up and burned alive (6 men and one woman).

In the courtyard of the building, the corpses of an 28 man and many parts of the skeletons unrecognizable were found in the burial pits. After careful examination, it was established that 28 had 8 women among women, 5 children (from 5 to 12 years), 5 men, and 10 didn’t manage to return not only age, but even sex. All found bodies and skeletons had traces of lifetime injuries characteristic of torture.

A few days later another commission was formed, headed by Matskul A.M. This time, the burial grounds were found on the side of the road leading to Abrau-Durso. 40 bodies were extracted from two pits, from which 16 men were identified, 10 women, 5 children (from a year old to 7 years). Part of the bodies was no longer identifiable — they were only parts of skeletons and skulls.

The next commission was working not far from the territory of the destroyed brick factory, in the area of ​​which the concentration camp was located. They also found several pits that were literally clogged with corpses. Again, it was not possible to find out the exact number of dead - too many separate parts of the skeletons. 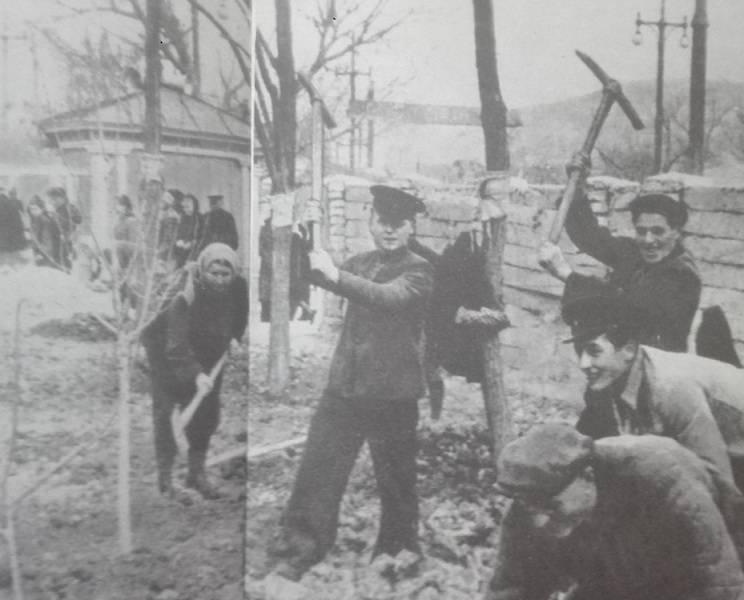 Returning residents are working to restore the city

In addition, single burials were found in large quantities on the roadsides. For example, a resident of Novorossiysk, Fyodor Volaitis, showed that in December 1942 had witnessed the deliberate and senseless murder of a woman. A citizen unfamiliar to him, apparently, was returning home when a German lorry arose behind her back. The woman went to the side of the road, the German driver deliberately turned behind her and increased speed. When the car crashed to death unhappy, the driver calmly returned to the road and drove away. The unknown was buried not far from this place so that the wild beasts would not sever the body. Who was she? What guilty before the European evil spirits? No one will ever know.

Not far from the industrial zone of the cement plants on the eastern side of Tsemesskaya Bay, excavations showed that the Nazis at the end of 1942 had tried to hide the traces of their crimes by burning the corpses of those executed. The remains pointed to a figure about 500 people.

The grave pits near the village of Vladimirovka became one of the most massive graves discovered during the war. A total of 5 pits were excavated. After the examination, it was precisely possible to identify the 425 corpses. Of course, not taking into account the different parts of the human skeleton, which none of the found did not belong. Unfortunately, this state of affairs is quite usual - corpses are dug up by wild beasts, the skulls after the shot at close range turn into a crumble, mixing with the ground, and other terrible reality of the search work.

The bodies were in varying degrees of decomposition, which directly indicated that the pits were used many times. No matter how crazy it sounded, but the most surprising thing about this find was that some of the victims were killed by gas. It means that this satanic practice was present practically throughout the entire Krasnodar Territory, the infamous Nazi "gas chambers". Moreover, members of the SS-10-A sonder-team acted in Novorossiysk.

As a result, by the end of the war, a very exemplary formulation of the number of civilians killed in Novorossiysk during the years of occupation appeared - “over 7 thousands”. The figure is very approximate, because only in December last year, the author personally witnessed the search work in Haiduk, when 46 skeletons and many parts of the skeleton were removed from the excavation site. 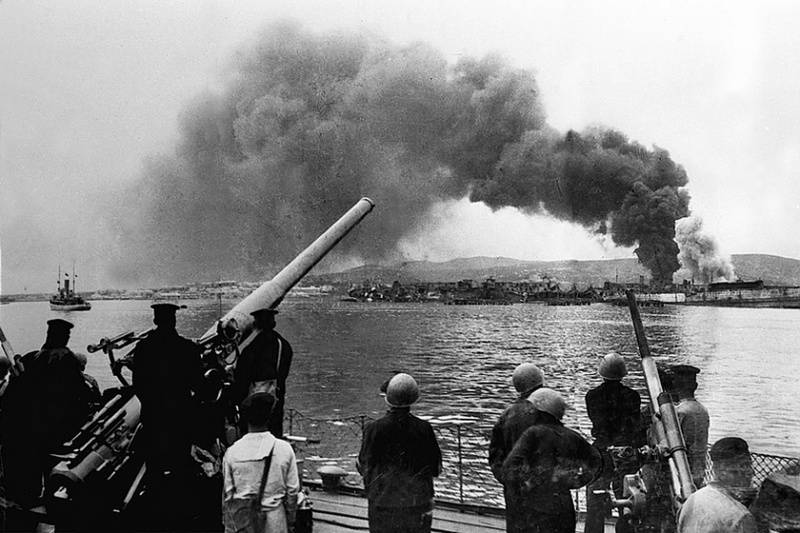 The beginning of the liberation of the city, a snapshot of the Soviet ship - military authorities did not even suspect how the Nazis committed atrocities in the last hours of the occupation.

Also in the acts are the names and titles of Nazi criminals who were engaged in direct command in Novorossiysk during the occupation. These are not only Gestapo and SS nonhumans, but also quite ordinary officers of infantry units, who after the war diligently fastened angel wings to themselves, fearing to repeat the fate of Keitel and Jodl. But the total robbery, rape, mass and single shootings, in which both soldiers and officers took part, were not only not prevented by the command, but were encouraged by them and were beneficial to him.

These are the “people”: Lieutenant-General Rudolf von Bünau, Colonel-General Richard Ruoff, Major-General Julius Brown, Major-General Hermann Kress, Major-General Wilhelm Wetzel, military commander of the northern part of the city (where concentration camps were located) Erich Reich, the head of the Gestapo Toybly, the commanding officers of the SS-10-A sondercommand (in fact, like all the creatures who served there) and many others.

20 years after the liberation of Novorossiysk on September 16, 1963, on the outskirts of the city near the Wolf's Gate, a piercing in sculpture composition and faithful with historical point of view, a monument called "Unconquered". The bronze sculpture group created by Ivan Shmagun - a woman who pressed a child to her and an old man who fell to the ground in a tattered shirt with his head proudly raised up - speak not only of the torment that fell on their lot, but also of the force that allowed them to remain people. Behind the sculptural group stands a 20-meter octagonal obelisk. 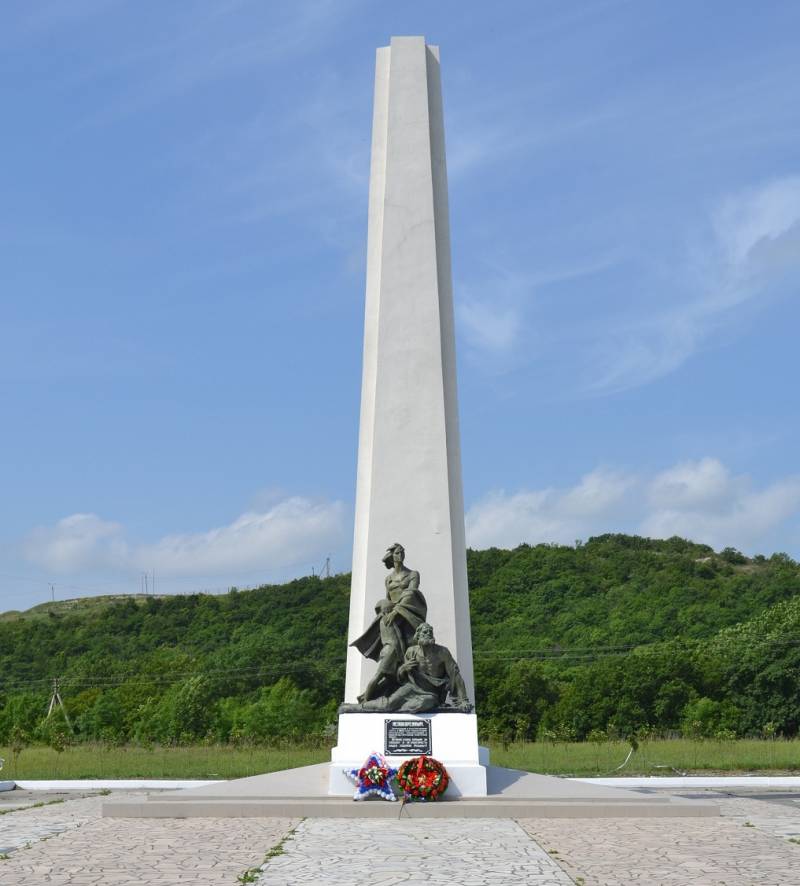 And this is not just a monument, but a mass grave. It is to the north of Novorossiysk that most mass graves were found. All unidentified civilians of the city, found in Nazi execution pits, taken to bury here. The monument is located away from the highway, it is difficult to notice. But it is good. The noise of trucks, the stench of roads and the turbulent activity of business have not reached here. And, thank God, because the people who died in the throes certainly deserved peace. 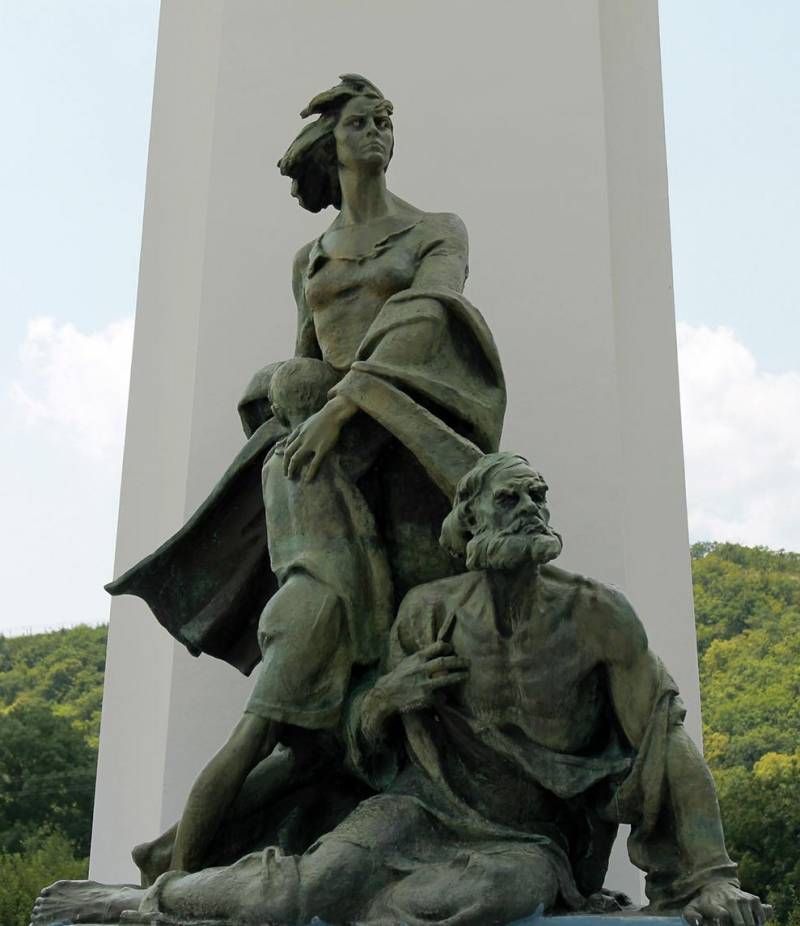