Nadia Savchenko: "I am the Ukrainian people"

March 28 2018
31
Poroshenko in his statement after the arrest of the hero of Ukraine Nadya Savchenko on charges of "terrorism" thanked the SBU for stopping the "special operation of Russia". Nadia, in the courtroom, said that “the Ukrainian people” were being tried in her person. And she turned to the people: “The authorities have made their choice, now the choice is yours.” 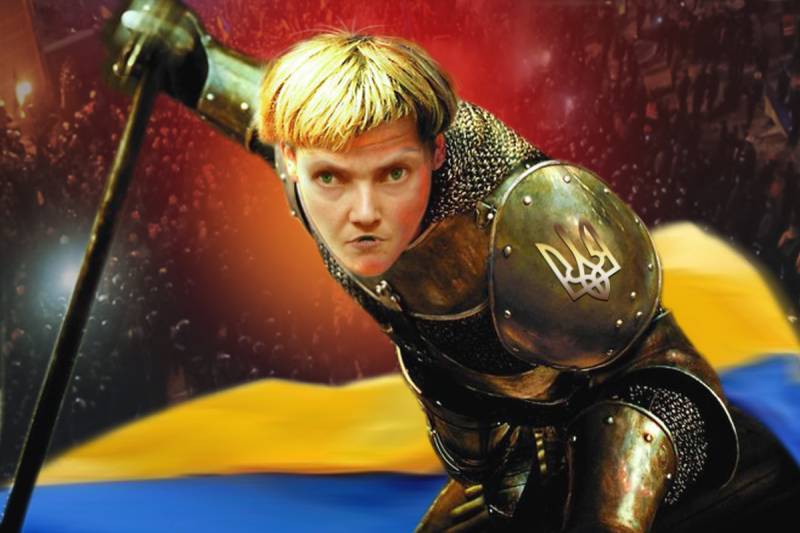 Numerous experts speak of political naivety and straightforwardness of this simple, not very educated "boy-woman" from the provinces, but her statements are stronger than, by definition, an educated government. Maybe intuitively, but you can say that, by the will of God, she took a stronger position than power.

I am the people! - This is a very strong statement. All the people today are in prison, which you call “Ukraine”, and I also go to prison, of my own free will, as Nagy says, and confirms his words with an act. She denies the accusations attributed to her: she says that the words about the shelling of the Rada were a joke, if you will, a political provocation so that those in power understood: "They are also mortal." This joke is absurd, Nadia did not make any concrete preparations for the bombardment of the Rada, but the “Poroshenko regime” pretended to take everything at face value. Because he is a “regime.”

In fact, Savchenko is right: Ukraine has been turned into a prison, people are fleeing the country in search of work, as if from a prison. Including in Russia runs.

Nadia has charisma, this is not to take away. If she survives, goes out of prison, it will become a problem for the Poroshenko regime, if she perishes, it will become an even bigger problem. As if at the front, Nadia occupied the commanding heights: “I am the people!” And you will not kill the people in one person, only you will provoke: “On the world, death is red!” The people say not for nothing.

Actually, Savchenko's idea of ​​returning from Europe to Kiev was precisely to go to prison. Although she was warned not to return !!! Teteruk toked in the parliament that she was already in Russia. Nadia returned, because, undoubtedly, she feels herself a Ukrainian Joan of Arc. It is ridiculous to others, while others are already afraid, which is why they removed their parliamentary immunity from her and hid her in prison.

Political analyst Chemeris on TV NewsOne says: "The country is on the verge of a new Maidan, the people can support the military." This “new Maidan” has just received its leader in the person of Nadia Savchenko, and for any uprising the most important thing is the banner, the leader recognized by all.

In the current situation in Ukraine there are many unknowns. How manageable are Poroshenko, Poltorak, and the Chief of the General Staff Muzhenko of the Armed Forces of Ukraine, in other words, how many nationalists are they in today, and what kinds of grades are they? Arrogance, complete freedom of nationalist marches on the streets of Kiev says either about some kind of paralysis of Poroshenko’s power, or whether these marches are the “funny troops” of the head of the Ministry of Internal Affairs Avakov. However, these "amusing troops" shoot, as they were wounded, threats against the government of Poroshenko, with hints of brutal violence.

Put the pig Poroshenko can and "quiet Kiev Americans." US Special Representative Kurt Volker recently deigned to notice a rise in nationalist sentiment in Ukraine. He took them to the account of Russia, of course, and not Avakov with Yarosh and Tyagnybok, but this fact in itself can have big consequences. This is a reason for the United States to wash their hands in Ukraine, allowing them to deal with nationalism in the center of Europe, Russia and the European Union. Laid a bomb in the center of Europe - and left.

In the light of Putin’s heightened Putin’s Russia and disorder and vacillation in Europe, no joint “march to the East” for the West is now possible, so the “plan B” for Ukraine according to the “controlled chaos” scenario becomes relevant: leave the ravaged country to the mercy of fate as not meeting the expectations by accusing her of insufficient “striving for freedom.” The United States has repeatedly practiced this ending of “controlled chaos”.

To do this, the American embassy in Kiev simply resigns as the supreme arbiter, which will lead to paralysis of power at the top, a famous situation will arise when "the tops cannot manage as before, and the bottoms do not want to live as old." This process seems to have already begun. Poroshenkovskaya SBU started pressing Avakov Azov in Kiev right in its headquarters, responding to the instructions of Kurt Volcker?

In general, Poroshenko fell between the hammer and the anvil, President Trump and Democrats Joe Biden and Clinton, and Kurt Walker is a protégé of John McCain and Biden and, most likely, Trump's opponent. Instead of Tillerson, the post of US Secretary of State was recently taken by a resilient tramp driver Mike Pompeo, and this new broom will sweep Kurt Walker from Ukraine.

Kiev historian Peter Tolochko believes that the US will enter into conflict with the Ukrainian nationalists, but later. Now their activity is on hand to the Americans: “All is well that is directed against Russia.” When the US enters the conflict that Tolochko is talking about, they will move on to their “Plan B”, then Nadia Savchenko’s time will come if she, of course, will live to see it.

Ctrl Enter
Noticed oshЫbku Highlight text and press. Ctrl + Enter
We are
Reports from the militia of New Russia for 27-28 September 2014 of the yearResults of the week. "Well, do not change me because of every idiot!"
Military Reviewin Yandex News
Military Reviewin Google News
31 comment
Information
Dear reader, to leave comments on the publication, you must sign in.