Chilean Armed Forces: Some of the Most Strong in Latin America

March 29 2018
29
Today, the Chilean armed forces are rightfully considered among the most powerful in Latin America. Like the armed forces of other states, they are designed to protect the freedom, independence and territorial integrity of the country. At present, the Chilean armed forces consist of the Ground Forces, the Air Force and the Navy. Of course, by the standards of the United States, China or Russia, Chile’s military expenditures seem tiny (4,61 billion dollars - 2016 year, SIRPI data), but in comparison with other Latin American countries, this is quite an adequate amount.


The leadership of the Republic of Chile regards the strengthening of the country's armed forces as a very important factor that contributes to the growth of state influence, intensifying and diversifying the country's ties with other states against the background of Santiago’s growing involvement in solving not only regional, but also global problems. In accordance with the country's constitution, the supreme commander of the Armed Forces of Chile is the president. It is he who determines the direction of military construction and the military-political course, appoints the Minister of National Defense, the chief of the joint headquarters of the Armed Forces and the commanders of the armed forces.

The Ministry of Defense of Chile is responsible for the development of doctrinal documents in the field of defense and security, development and construction of the army and fleet. The head of the military department in Chile is a civilian who exercises leadership of the Armed Forces through the Ministry of Defense, as well as the joint headquarters of the Armed Forces. The latter acts as a permanent advisory body to the Minister of Defense in preparing for use and in the management of the Armed Forces in the event of a threat of external aggression or the emergence of an international crisis that would threaten Chile’s national security. 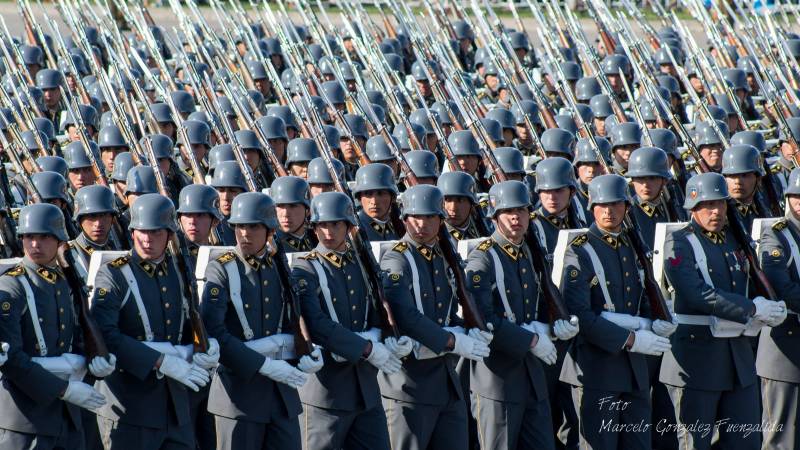 Military parade in Santiago, 2014 year
Given the size of the territory and the borders of the country, it seems that the armed forces of Chile should be impressive in size. Indeed, the country stretches from north to south for 4300 kilometers, while its width from west to east never exceeds 200 kilometers. The land boundary and coastline are 6400 kilometers each. From a purely military point of view, it would be very difficult to defend such a large elongated territory. Fortunately for Chile, virtually the entire land border of the country falls on a natural obstacle - the Andes. Overcoming this mountain range is difficult for infantry, and for heavy combat vehicles, the mountains are almost insurmountable. It should also be borne in mind that the country has no neighbors with great military power. Taking this into account and due to substantial income from copper exports, Chile managed to create quite compact and well-equipped aircraft, which today are among the top five in Latin America, said Alexander Khramchikhin, deputy director of the Institute for Political and Military Analysis.

The total strength of the armed forces of Chile is 73 500 people, the data of the Foreign Military Review magazine No. 8 for 2013 a year. The strength of the Land Forces of Chile is 41 400 man, Navy 20 700 man, including 2800 marines, the Air Force 11 400 man. At the same time, according to the popular statistical internet resource knoema (world data atlas), the number of Chilean armed forces in 2015 was 109 450 people, this figure also takes into account militias that could be used to support or replace regular troops.

Copper is not in vain already mentioned above in the context of the development of the armed forces of Chile, for Santiago this metal is a strategic resource. The country is the undisputed leader in copper production, and Chile has the largest proven copper reserves (of the order of 20 percent of world reserves). It is not surprising that the country partly spends revenues from the sale of copper on its armed forces. Financial funds for the purchase of weapons and military equipment in Chile are allocated outside the republican budget. On the basis of the “Law on copper”, the state-owned company Kodelko annually transfers 1958 percent of its export earnings (but no less than 10 million dollars) for these purposes from 240. The incoming money is accumulated on the accounts of a specially created fund in the central bank of Chile, after which it is spent exclusively on the purchase and modernization of weapons and military equipment. Due to stable prices for copper and steady demand for metal accumulated in a special fund, according to various experts, the amount is over 5 billions of US dollars. 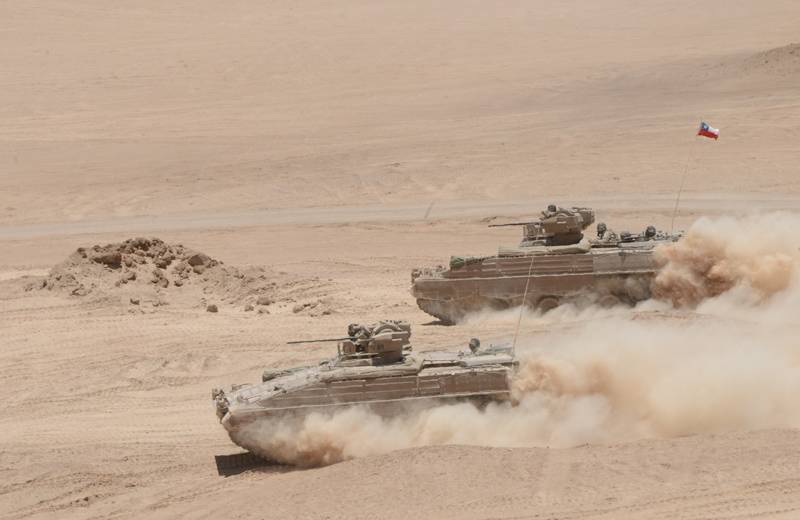 The main suppliers of weapons and military equipment for the Chilean armed forces are traditionally the United States and Israel, some of the equipment was acquired in Western Europe, as well as in Brazil. At the same time, the possibilities of Chile's own military-industrial complex are extremely limited. The share of obsolete military equipment in the Chilean army is quite large, but significantly less than in most Latin American states. According to Alexander Khramchikhin, Russia regularly participates in local military exhibitions, but so far has not penetrated weapons market of a given state.

Ground forces are the most numerous type of armed forces of Chile. They include infantry, armored, mechanized, artillery, mountain rifle, engineering units, as well as special forces, communications, and army units aviation and rear support. Organizationally, the Chilean ground forces are consolidated into 6 divisions, which are deployed in the respective military zones. In addition to the divisions, the ground forces have a separate army aviation brigade, two separate Lautaro special operations brigades, and there are also 4 armored and 2 motorized infantry brigades. To increase the effectiveness of operational command and control, a special command of ground operations has been deployed. Ground forces are represented by the following infantry divisions: 1st (headquarters in Antofagasta), 2nd motorized (Santiago), 3rd mountain (Valdivia), 4th (Koyayke), 5th (Punta Arenas), 6- I (Iquique). 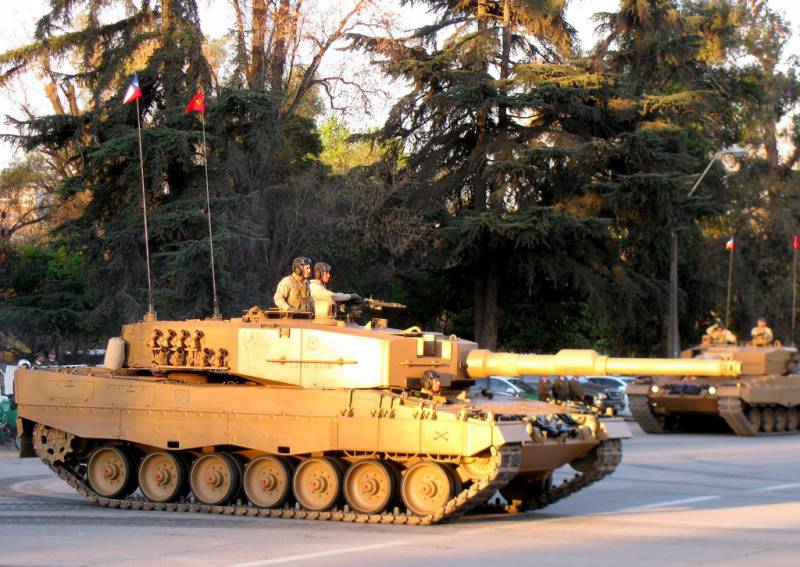 MBT "Leopard-2А4" Chilean Army
Ground Forces Artillery is represented by 59 ACS, among which are 48 American 155-mm ACS M109 and 11 of old French AMU MX F3 ACS of the same caliber. The towed artillery is represented by 82 guns, most of which are Italian 105-mm howitzers M-56, also there are 16 American 105-mm howitzers M101A1 and 12 Israeli 155-mm howitzers M-68 and M-71. Also in service is more than 900 mortars of various calibers, including self-propelled, mostly Chilean-made FAMAE. In addition, the Chilean ground forces have 12 Israeli MLRS LAR-160 (160 caliber mm) and 55 Israeli latest Spike ATGMs.

The military air defense system includes two French air defense systems, the Crotal, the 8 British man-portable air defense systems Bloupep and the Israeli Israeli anti-ship artillery missiles 40 and the XMNCM-20 (mounted on the Piranha BTR chassis). In addition, there is a fairly large number of army aviation and its “branch” - the aircraft of the Carabinieri Corps (Chilean National Police). On their arms is about 60 light aircraft (mainly American-made) and more 30 different helicopters.

The Chilean air force is an independent type of armed forces. The country's air forces are designed to solve the following list of main tasks: to gain and maintain air superiority; covering the administrative and political centers of the country, important objects and areas, as well as groups of troops and equipment from air strikes; rendering direct fire support to units and formations of ground forces and naval forces; conducting intelligence; the transfer of personnel and cargo by air in the interests of all types of the armed forces of Chile; airborne assault. The Chilean Air Force includes combat and auxiliary aircraft, as well as air defense assets and forces. 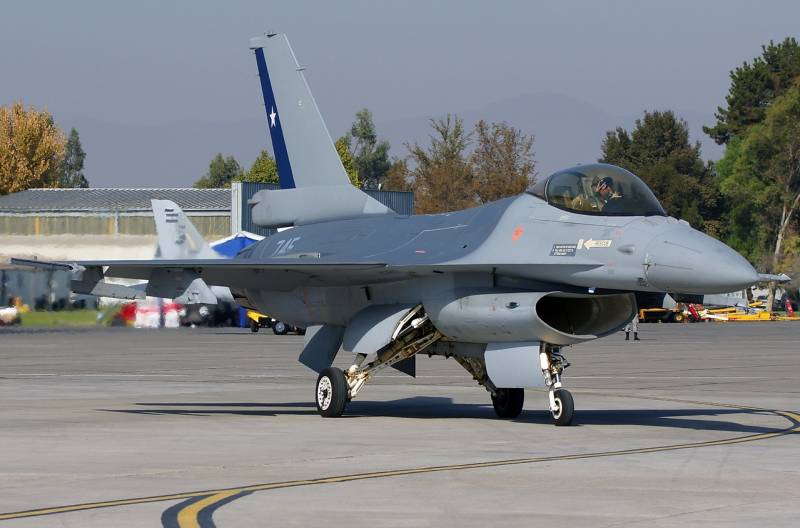 The naval forces are also an independent type of armed forces of Chile. They are designed to protect maritime communications and the exclusive economic zone of the state; ensuring the safety of maritime navigation in the Strait of Magellan and Cape Horn; combat submarines and groups of surface ships of the enemy; providing support to the country's ground forces in coastal directions; conducting amphibious operations. The Navy of Chile consists of submarine forces, a squadron of surface ships, groups of missile boats, naval aviation, command of amphibious forces, command of marines and special forces.

The naval forces of Chile and the coast guard united with them are organizationally divided into 5 naval zones: 1-I (Valparaiso), 2-I (Talcahuano), 3-I (Punta Arenas), 4-I (Ikike), 5 -I (Puerto Montt). The naval forces include 4 submarines, including two newest boats of the Carrera type (French Scorpen) and two fairly modern Thompson boats (the German project 209 / 1300). The basis of the fleet surface forces are the 3 of the newest frigates Almirante Cochrane (English Norfolk), the 2 Almirante Riveros (Dutch Karel Doorman) and 2 of the frigate Captain Prat (Dutch Jacob van Heemskerk), there is also one frigate "Williams" (English "Broadsworth"). They are complemented by 3 missile launches "Kasma" (Israeli "Saar-4"). The fleet also has numerous patrol boats and patrol ships: 6 Ortiz, 4 Piloto Pardo (OPV-80), 8 Grumet Diaz (Israeli Dabur) and before the 100 ships were in coast guard. The landing forces of the fleet have a modern landing ship dock “Sargento Aldea” (French “Fudr”), two TDK “Rancagua” (French “Batral”), one transport “Akiles” and one landing barge “Elikura”. 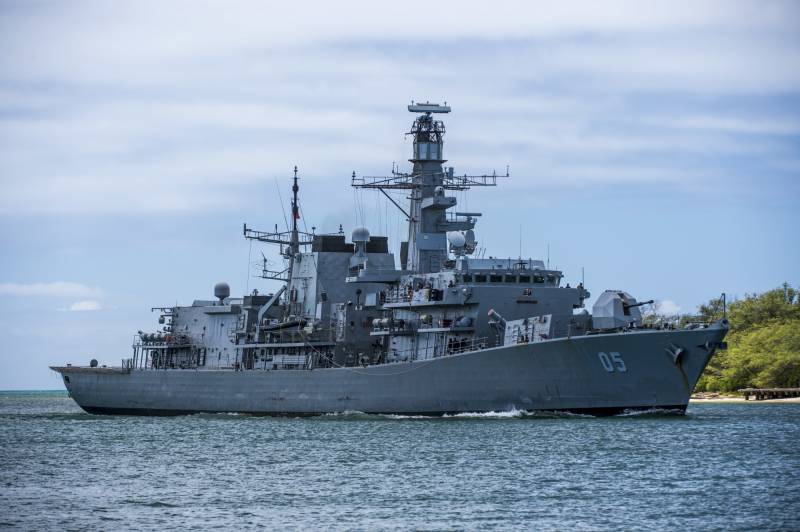 The Chilean Marine Corps consists of two defense groups for naval bases and an amphibious expeditionary brigade. The Marines are armed with 30 British-made Scorpion light tanks, up to 100 BTR (40 Swedish Bv206, up to 30 American LVTP-5 and possibly 25 Swiss Roland). There are also 8 mortars and 40 towed guns.

Chile is currently economically, militarily and politically one of the most stable countries in Latin America, said Alexander Khramchikhin. At the same time, the Armed Forces of Chile are capable of performing all the functions assigned to them to protect the sovereignty and territorial integrity of the country. One of the main tasks of the Chilean Armed Forces is to provide a high level of technical equipment that would guarantee an adequate response to both existing and potential threats to the territorial integrity and sovereignty of the state, as well as contributing to the growth of the political weight of the state at the regional and international levels.