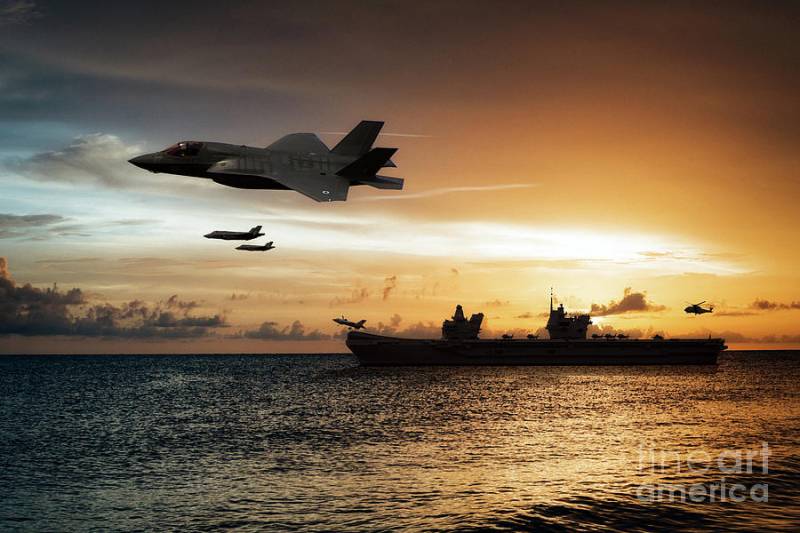 Last week, a report on the state of the armed forces of Albion appeared on “VO”. The expert, without being ashamed of expressions, colorfully described the decline of the once-powerful Air Force and Navy (the British army was not traditionally a priority).

British military expenditures are only 1,9% of GDP, which is not the best way affects the country's defense. However, the author became too enthusiastic about touching on areas of which he has no clear ideas. The lack of information was filled with guesses, which, according to the author, should correspond to the general line of his story.

Britain cannot rely on the “distant line of ships covered by storms of ships” of the “ruling seas”; things are even worse with it than with aviation.
"A shabby British lion:" Go away, old fallen cat! ", By Ya. Vyatkin.

Weighing the mistakes of others, few of us will not put our hands on the scales (L. Peter). Objectivity is a subjective concept. For accurate estimates, it is necessary to have full information, which is unlikely in practice. The maximum that a journalist can do is to be impartial when analyzing the data available to him.

A closer acquaintance with the Royal Navy leads to an unexpected conclusion: their fleet has been in the best condition in the last 50 years. A limited budget is enough to maintain some of the best Navy in the world. To verify this, rewind history a few decades ago.

1982 year, Falkland conflict: the best that was in Britain - the destroyers “type 42” (4200 tons) with limited combat capabilities. Eight units in the ranks.

A couple of dozens of destroyers and frigates (2000 tons) built 1950-60х. The simple fact speaks about the capabilities of these “vessels”: out of eight dozen missiles launched by the “CiKat” air defense missile system were recorded ... 0 hits.

Not surprisingly, the 30 ships and ships (one-third of the squadron!) Were damaged by air attack weapons. The British admirals owed their victory to the even more depressing state of the Argentine armed forces, those of whom were denied 80% of bombs dropped. 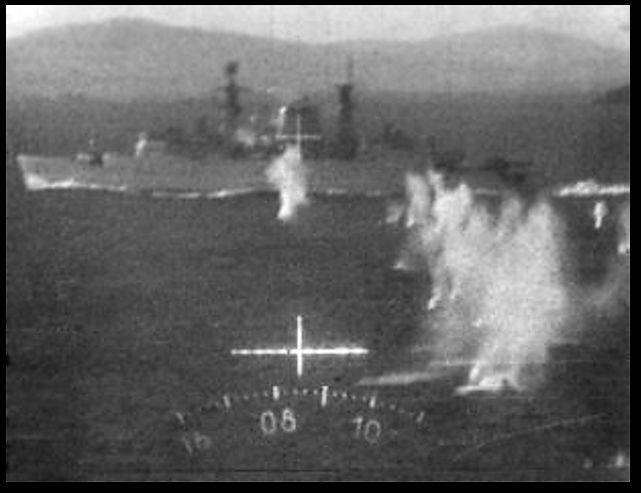 Like a newsreel of the Second World War. The air defense of the British ships allowed them to be shot at close range.

Three decades have passed. How has the British fleet changed?

"Darings", in general, is also not a masterpiece of shipbuilding, have a rather problematic air defense system
From the same article.

Particularly strange was the mention of the problematic air defense missile system, given that the “Daringi” is the best of the specialized air defense / missile defense ships in the world. Where the British destroyers fail, no one can handle it.

How justified is such a statement? To make sure that they are the best in their class, just look at the ships. 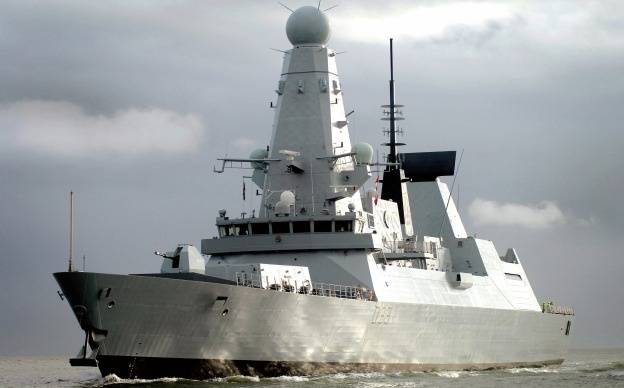 Destroyer stands out to all. From a competent layout with an outstanding height of antenna posts, to the quality characteristics of the antennas themselves (2 radar with AFAR) and the PAAMS (S) anti-aircraft complex, which set a series of records for intercepting targets in difficult conditions.

“Daring” is twice as large as the destroyers of the previous type (Type 42). Its total displacement is about 8000 tons. The absence of strike weapons and long-range missiles is due to peacetime: in the bow part of “Dearing” a place for 12-16 additional missile silos is reserved.

Even a decade after laying the level of air defense of British destroyers remains unattainable for the Navy of most countries of the world. 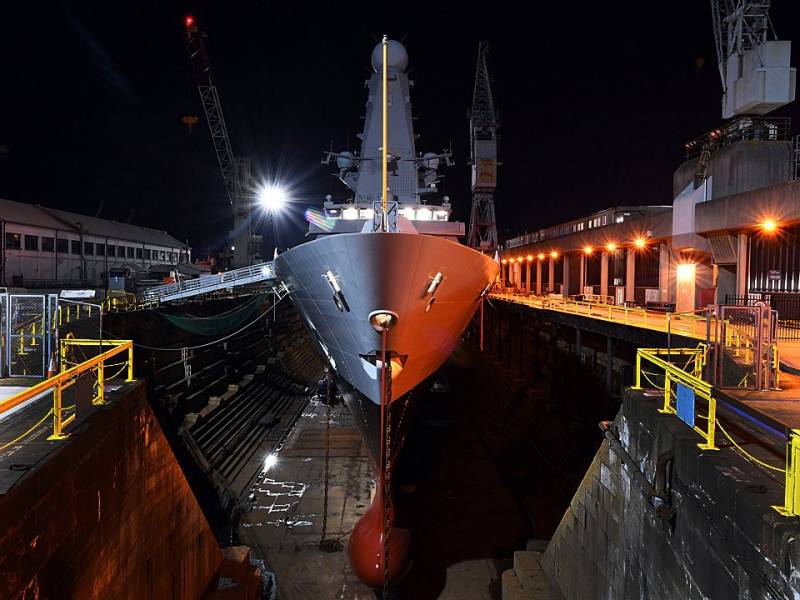 In addition to the “Derring”, the surface components include 13 frigates of the “Duke” type (“Herzog”), which joined the Navy in the period from 1990 to 2002. In their characteristics and composition of weapons, they roughly correspond to the domestic BOD Ave 1155. At the same time, the “dukes” are younger than domestic BOD and destroyers on average 10 years.

In 2017, the next generation frigate Global Combat Ship (Type 26) was laid at the shipyard in Glasgow, with a total displacement of more than 8000 tons. It is expected that by the end of the next decade the Navy will receive eight such overgrown frigates.

At the same time, the project “Type 31e”, also known as “general purpose frigate”, is being developed. A more modest version of the ocean zone ship, planned for construction by a series of 5 units.

In 2017, the aircraft carrier Queen Elizabeth began to pass the sea trials. With a full displacement over 70 th. Tons, it became the largest of the warships ever built in the UK. As well as the first full-fledged aircraft carrier of the Royal Navy over the past 38 years, since cutting out of outdated Arc Royal into metal in 1980. 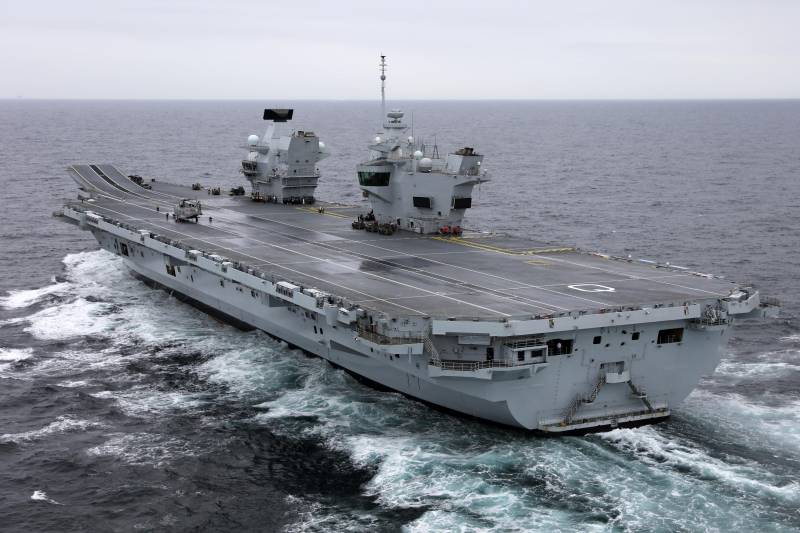 How will the potential of the Navy change with the advent of Queen Elizabeth and his twin, the aircraft carrier Prince of Wales under construction, whose transfer the fleet planned for 2020?

Despite its outstanding size, “Queen Elizabeth” does not have catapults and is designed to operate aircraft with a vertical (shortened) take-off and landing. The actual size of the air group under the plan will be just the X-NUMX of the F-24B fighter and several units of the rotorcraft. In the amphibious configuration it is possible to place transport-combat helicopters (including heavy CH-35 “Chinook”), convertible gliders and the AN-47 “Apache” shock squadron.

It is known that even the American “Nimitsy” - unlike the more powerful and sophisticated ships with a larger number of wings, are not able to influence the situation in local wars. Then what do the English expect? Obviously, no significant force "Quinas" will not represent. 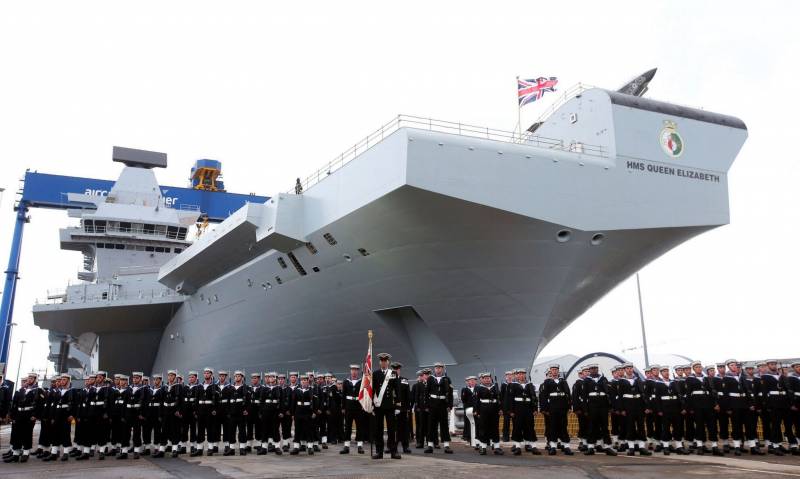 One thing is certain - even such a ship is better than an empty jetty.

70 thousand tons could not be wasted. The British got a universal platform - a mobile airfield with a couple of dozen fighters, an anti-submarine helicopter carrier, a landing ship and a maritime radar base - thanks to its powerful radar, Queen is able to control the airspace within 400 km.

Now he will be driven wherever it will be possible to use such a ship. The question of the need is beyond discussion. The status of "sea power" obliges to have an aircraft carrier.

With the advent of aircraft carriers, the question arose of the further fate of the landing ships Albion and Bulwerk (Oplot), which entered service in the 2003-2004. The British UDC does not differ in outstanding capabilities, yielding to the aggregate characteristics of the French “Mistral”. Given that amphibious operations can be provided with the participation of the Queen Elizabeth aircraft carriers, the planned service life of the Albion UDC (up to 2033-34) can be adjusted downwards.

The possibility of early cancellation of the UDC has another reason: the structure of the British Navy has a “shadow” element. The auxiliary fleet (RFA) is a special-purpose naval vessels manned by civilian crews, while performing purely military tasks. High-speed tankers, integrated supply ships, universal amphibious ships and helicopter carriers disguised as civilian ships. 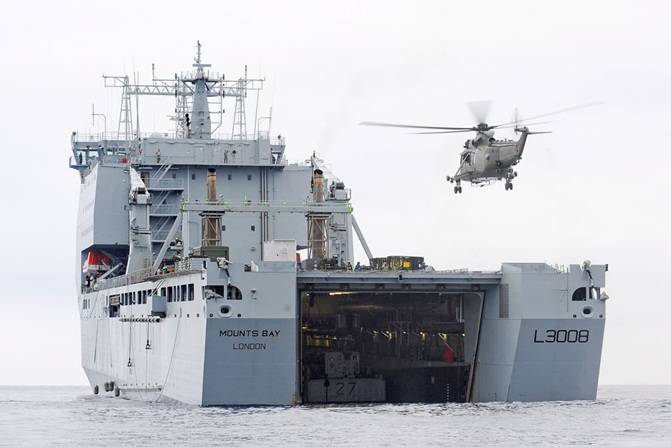 Auxiliary fleet is actively updated with new equipment. So, in the 2017 year, a high-speed tanker (KSS) of a new type “Tidespring” was put into service with a displacement of 39 000 tons. This unit is the backbone of the British Navy, providing operations around the globe. 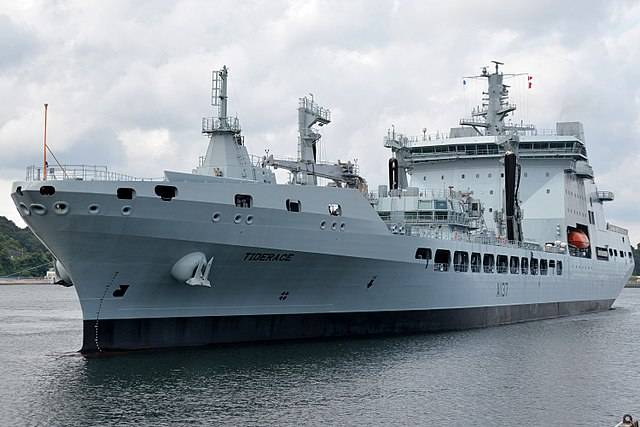 In the ranks - 10 atomic submarines:

At the different stages of construction there are two more submarines of the “Astyut” series, the third one, which was built but did not have time to go into service (“Odeyshs”), began to pass tests in January 2018.

Given the technical condition of the ships, their young age and equipment (for example, all six submarines are carriers of long-range cruise missiles), the British Navy can claim to be second in the world (after the United States) in the number of combat-capable submarines. 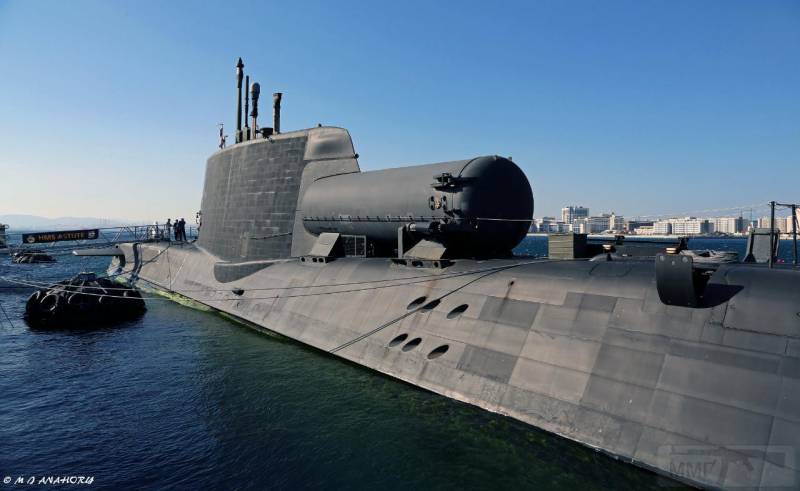 In order not to retell the hackneyed truths, I want to share a couple of facts about the Submarine Service.

It is well known that in the armament of the British SSBNs are the American Trident-2 ballistic missiles. It is less known that the British use more advanced nuclear warheads of their own design, having adjustable explosion power (from 0,5 to 100 CT).

All six multi-purpose nuclear submarines are armed with long-range Tomahawk CD. Britain is the only one of the allies of the United States who was granted the right to acquire this weaponscombining strategic flight range with conventional warhead.

The rate of purchases of cruise missiles is small: every decade, the British acquire approximately 65 “Tomahawks” to compensate for the expenditure of existing missiles. The first combat use took place during the bombing of Serbia in 1999, the British submarines launched 20 missiles. Later, launches of the Kyrgyz Republic were carried out from the Indian Ocean in support of the operation in Afghanistan, the US invasion of Iraq and the bombing of Libya in 2011.

The worthiest of worthy opponents

The only fleet in the world with experience in waging a sea war under conditions close to modern ones. Able in practice to provide logistical support for a large maritime operation at a distance 13 thousands of kilometers from its shores.

Assessment of the status and capabilities of the Royal Navy is impossible without taking into account the geopolitical realities of our time. The British fleet is an integral part of the US Navy, having a multinational format. Anti-air quality "Derring" are used to ensure the defense of US aircraft carrier groups. Auxiliary fleet tankers escort American squadrons. Atomic “Trafalgar” launch cruise missiles to support US operations in the Middle East. 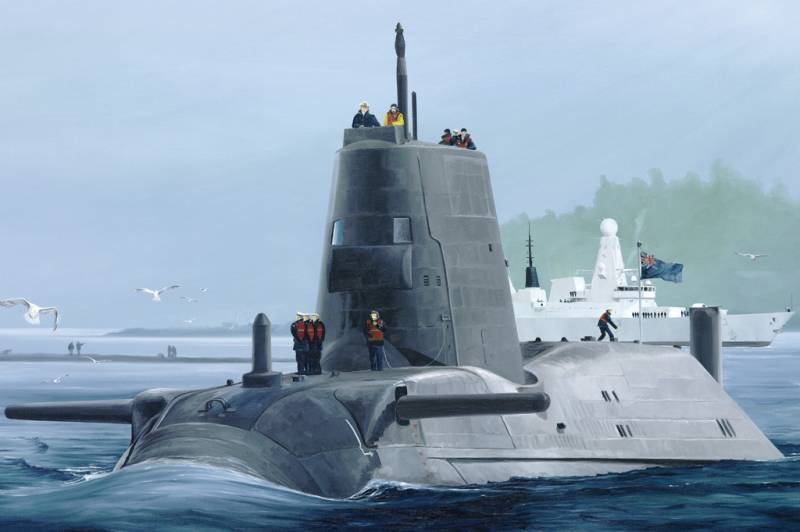